As I am a great music lover and I love lots of different musical styles, I decided to create a musical instrument. At first, I didn't know which one I was going to choose to recreate, but I liked the sound of making a guitar and so I decided to give it a go.

The first idea was to put inlays and ornaments on it. I didn't just want to make an ordinary guitar; I wanted to create a gentle instrument.

First I didn't know what which one will be the winner, but mostly I like the sound of the guitars, so I decided to make my own... The first idea was to put inlays and ornaments on it. I just didn't want to make an ordinary guitar. I wanted to create a gentle instrument (Fig.00).

I used several different ways to model the various parts of the guitar, with the main two being box modeling and patch modeling. Patch modeling is a very good way to make curved surfaces, like the body of the guitar or guitar neck, because it gives you an accurately curved mesh.

The whole mesh was MeshSmooth capable and it was about 128,532 polygons and 94,000 vertices (what a nice, round number!) Of course these figures are for the model without any MS on it. For those renders you have to kick up the MeshSmooth and the poly count jumps to about 300,000.

Here are a few screenshots from the wireframe of the guitar (Fig.01 - Fig.10). 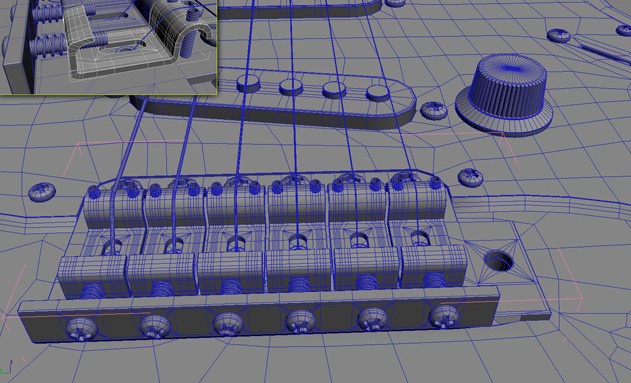 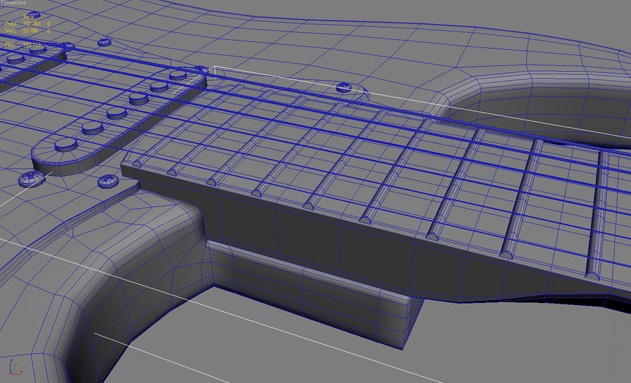 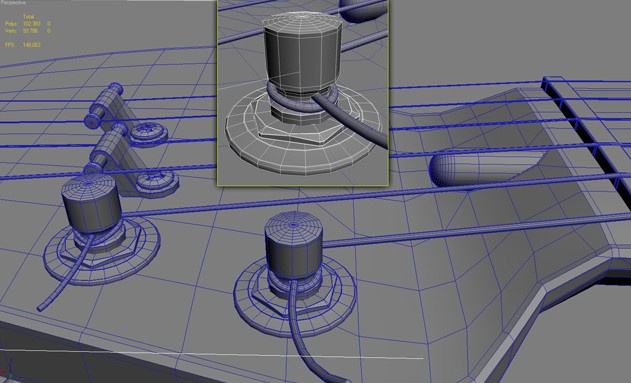 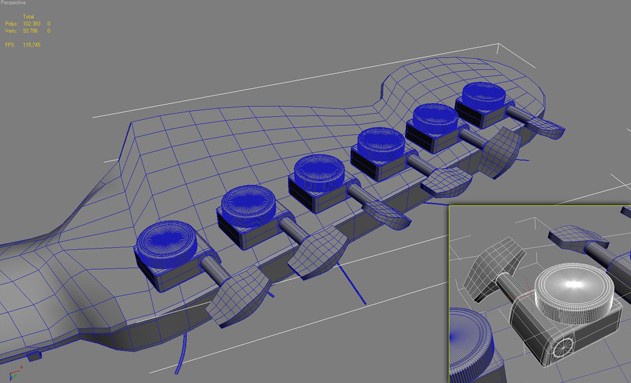 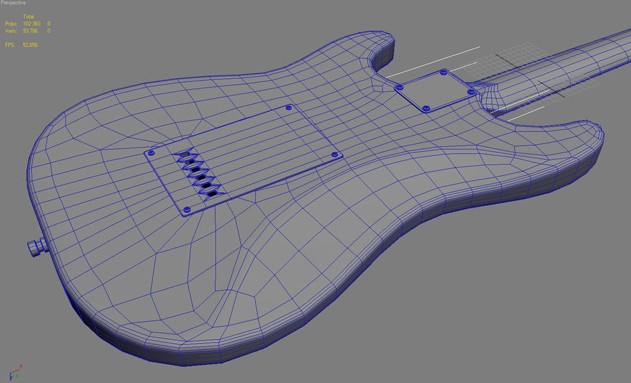 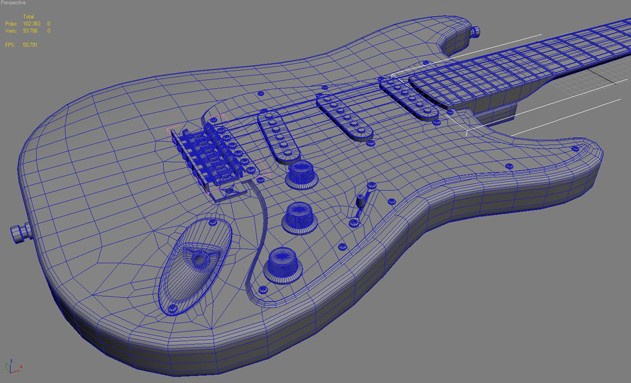 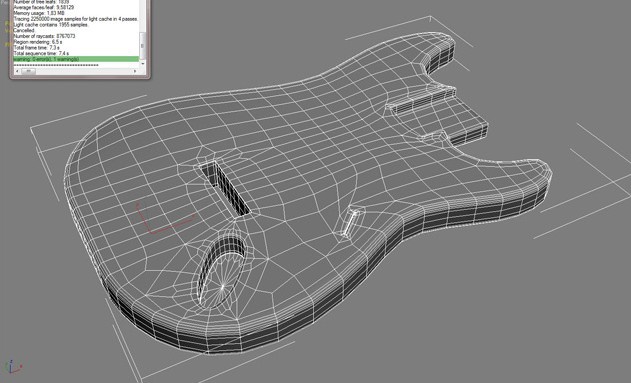 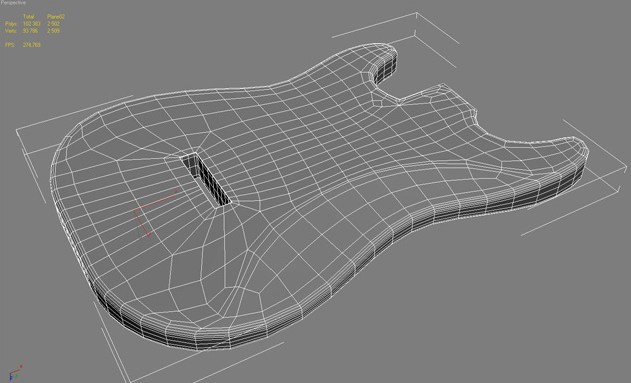 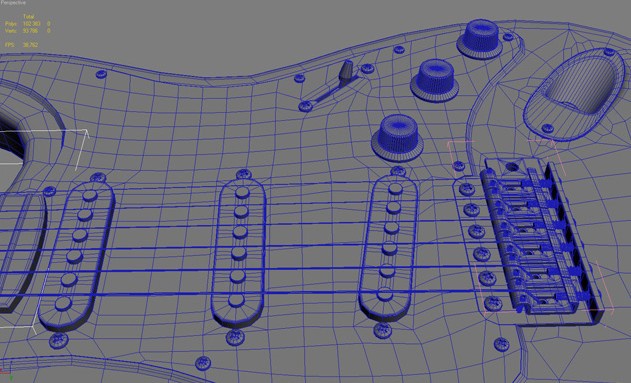 I used only procedural maps for the wood material. Wood is a special material; every millimeter inside and out looks different. The look of a piece of wood depends on where you cut it and this basically determines the look of the whole material.

There are two ways to create the wooden material for a guitar's neck (or for anything else really). The first way is to flatten the UV Map and texture it with real wood textures, but on a curved shape like the guitar neck, it's not very easy to do this, or very accurate.

The second method is to use procedural maps, which is much easier and means you don't have to flatten the UVs. It will also spare the system memory while rendering, it has nearly unlimited resolution so it won't be pixilated in greater resolutions and it looks good too! Oh and have I forgotten to mention that it's more accurate than simple textures and spares a lot of time? So it has a lot of advantages and I bet you can guess which method I used!

There were three parts to the wooden material I used (Fig.11): 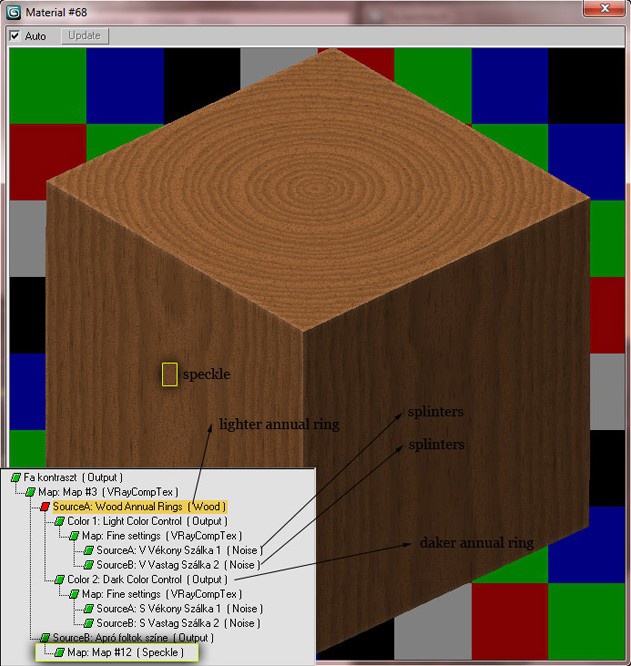 A few corrections were needed to get a correct result. The first thing was to set the direction of the annual rings and the splinters. To do that I tried to guess how the annual rings and splinters became parallel. Fig.12 and Fig.13 show the coordinates of the splinters, and Fig.14 shows the coordinates of the wood map. With these settings the two types of maps were parallel and they were also in-line with the Z-axis of the object.

If you want to know more about how this material works then you can download it by clicking here.

Okay, here are the specific textures I used for this image. I used CorelDRAW to make them (Fig.15).

The strings have an over-tiled Gradient Ramp texture on them and it's fully procedural of course (Fig.16). 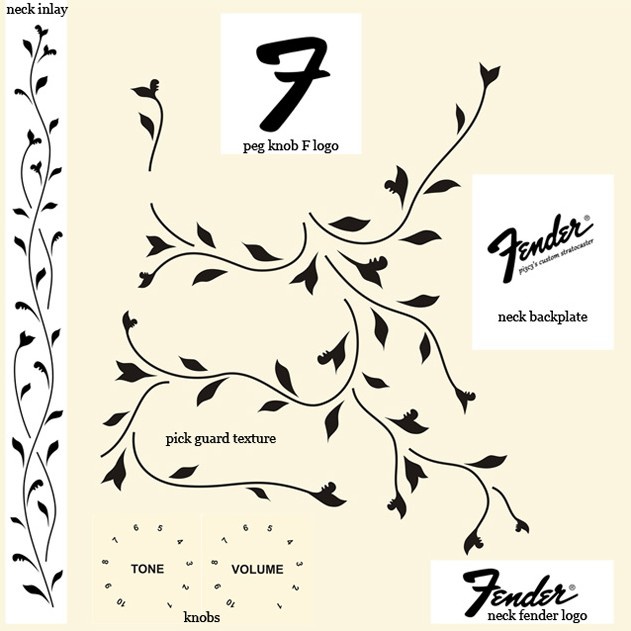 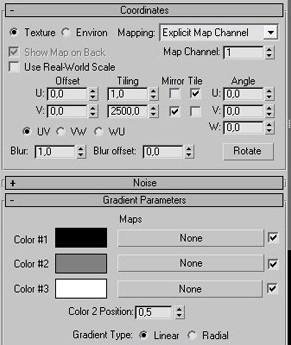 First I wanted to create a scene, but I changed my mind after I'd finished the guitar. Since I wanted to show you every part of it, I didn't feel necessary to create an entire scene. Alright, but what could I do instead? Should I create an ordinary blue-orange studio scene? No, it was too boring. Should I use HDRI? No, never, I hate it - it doesn't give accurate results as it hasn't got distance from the objects. How about using original lights? Maybe ... but how?

After a little thinking, I Googled for some real studio lighting pictures. I was lucky and found quite a few. I then created two new types of light sources for myself. (I just wanted to prevent the hard edges on the reflections generated by simple VRayLights) (Fig.17). 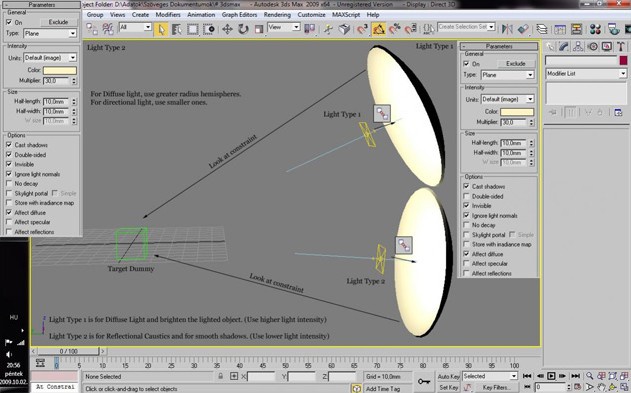 
Here are a few things about lighting that I'd just like to mention at this point:

The next thing now was to put the lights in the correct places in my image. The lights that I wanted to see from the reflections were diffuse lights (I tried to find a place and size where I could see them from the reflections). The directional light was a good choice to generate nice, smooth shadows and caustics. I put them beside the model, or more then 45 degrees from perpendicular, and it gave a very nice result, as you can see in Fig.18. 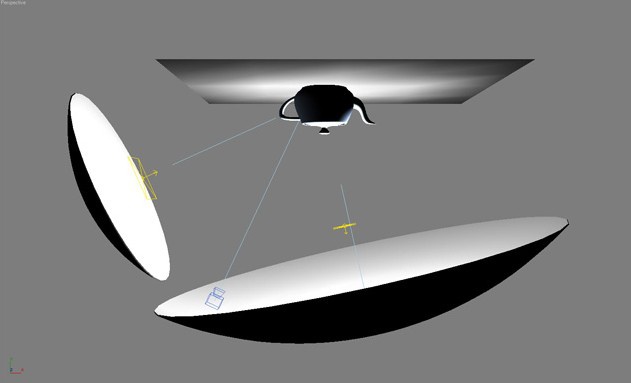 I want to point out one thing at this point: to get a realistic look for reflections it's a good idea to use 5-10 light sources and try to cover more than 50-60% of the places where there is no light. With this method there will only be a few percent of dark places on the reflections, which is just as much as it really needs.

You can also use other shapes to make a nice, realistic reflection. If you changed to a flat shape then you can easily simulate a wall or something else ...Â  you can make a plane and light it from the bottom edge or you could put two or more lights aside so that it looks like a window from the reflections.

Here is the lighting combination that I used for my rendered scene (Fig.19). 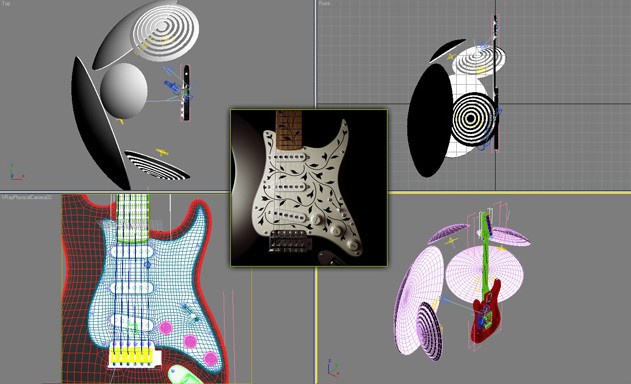 I used HDRI to save the raw renders. It's the best format to save your images in because it has 32bits/channel information from your renders. Of course it gives you a little bit of an interesting result when you load it into Photoshop, but that's quite easy to prevent. Sadly Photoshop can't make any procedures with this format so you have to change the color depth to 16bits/channel. With this method you still have 65536 colors/channel so you get very, very good gradients.

The next step was to correct the colors and make the picture natural. I used exposure and Blending methods to accomplish this, mostly Multiply, Overlay and Scene. I rendered down the ZDepth pass in 3ds Max and then I used Lens Blur to make DOF. I put Chromatic Aberration on to the picture with great care - you just have to feel it and not see it. I also put a very fine glow on to the highlighted places and some color correction.

That's all you have to know about this picture! I hope you enjoyed this Making Of and found it useful (Fig.20). 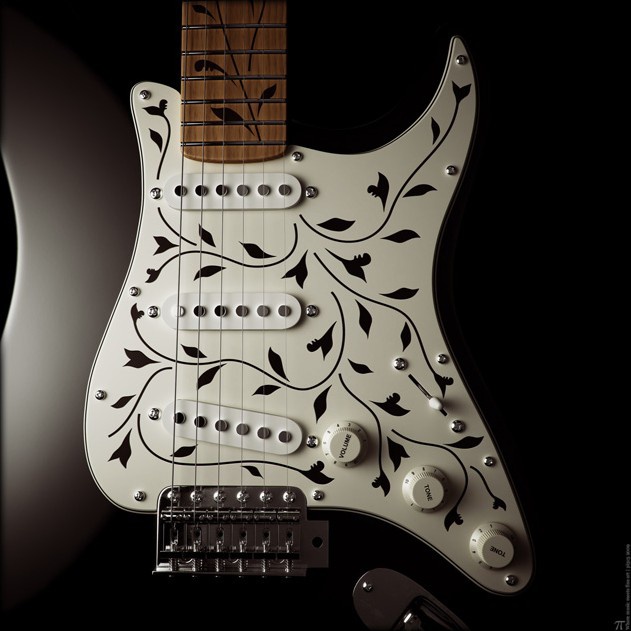