The making of ‘Return of Kaweh’

Ali Kiani Amin shares an overview of the process used to create his image, Return of Kaweh.

I always had an idea for an illustration about the legend of an Iranian warlord, Kaveh (a character in Shahname of Ferdosi who rose against the tyrant, Zahak. A sign of his revolutionary action is a Kaviany brawl), who will come back one day and save humanity. I always think about how the moment that he rises again will look.

The first image that was engraved in my mind was a flying form that would fly the character back to this world. I thought about flying machines until I ended up with a dragon-like shape. At first I thought about what would have accompanied him, but eventually reach the fact that Kaveh is the focus of this piece, so I started with primary sketch. 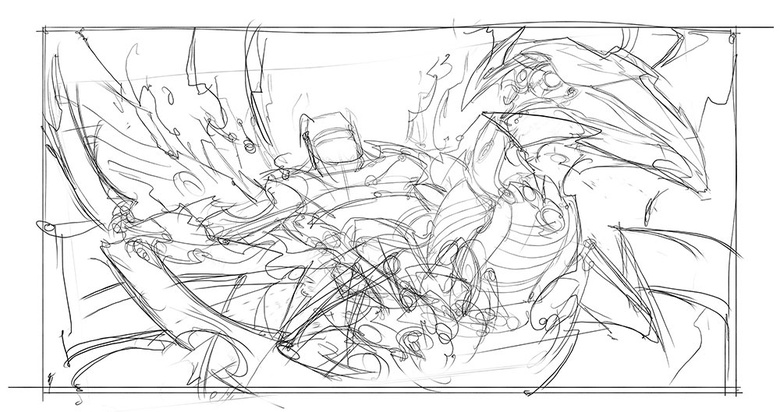 This is a quick charcoal sketch which depicts the last design. After step 1 was created in Painter, I designed a sketch to examine the whole connection between the character and the background. This drawing is not suitable for painting on, but can be useful as a construction reference. 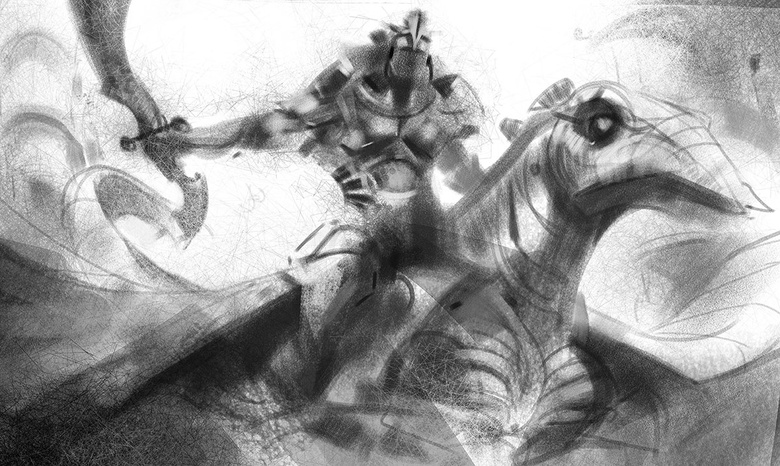 At this point I started another sketch. The main aim in this sketch was to make a connection between the details of foreground and background. Also to visualize how coherent the figure to space is with a range of gray. But still the style of the character's formation on the dragon's shape, the identification of "Kaveh the Smith" has not yet been depicted. 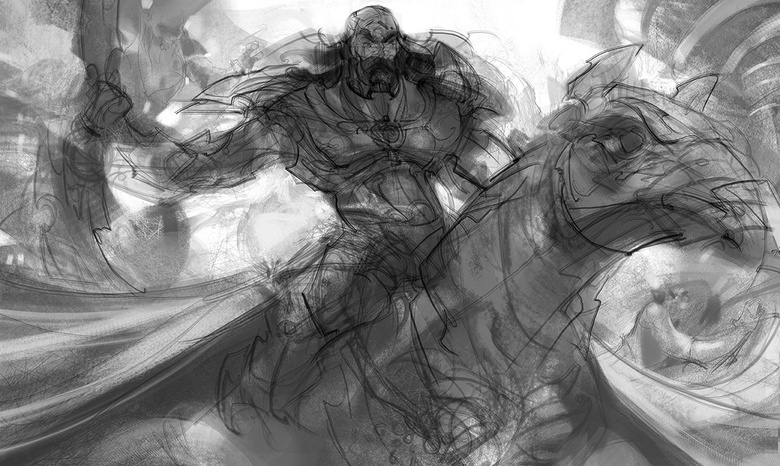 I added the first lot of shading to add form to the focal point, the main character. I also added a spot light on him and blurred background elements.

At this stage I had transformed the character's position. His pose and the relation between the space and the form of wings also changed. I added some gradients and overlaid some textured surfaces to lead the direction of the viewer's eye. 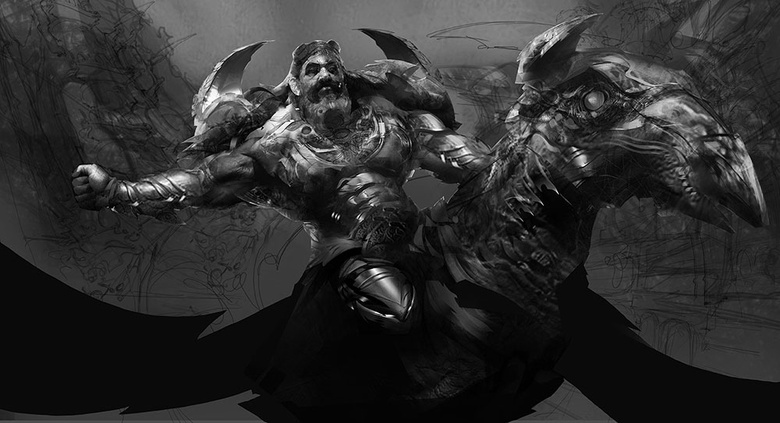 I began to add details to the background including atmospheric elements. I also worked on the details of the character including the precise design of sword, horns and the dragon's features.

The forms and values started to become a lot clearer with the added details. 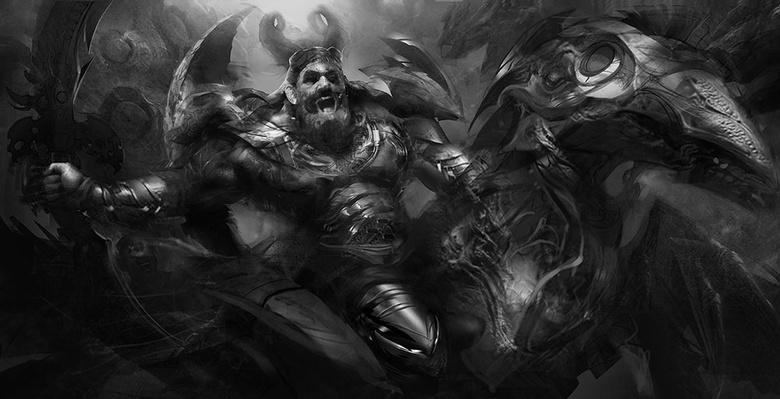 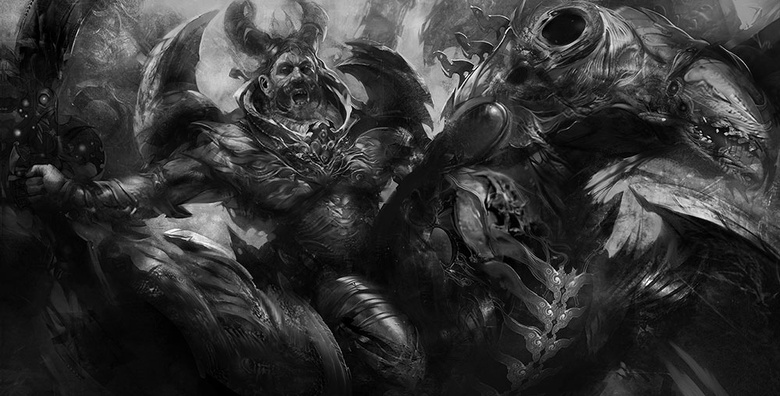 I added a Sepia layer to the whole image. The main goal was to create an overall monotone coloring that fills the entire image step-by-step that connects the black and white space to a color atmosphere.

The final image will have a green color tone to it, but here I continued working in the style of the Baroque masters by using a brown monotone. 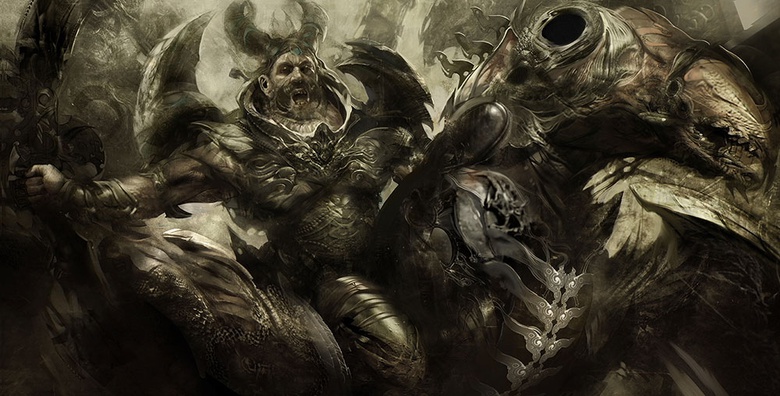 In this step with a warm light I added detailed spot lights to areas of the image, including the steam of the dragon's breath, details on the sword and the main characters armor. 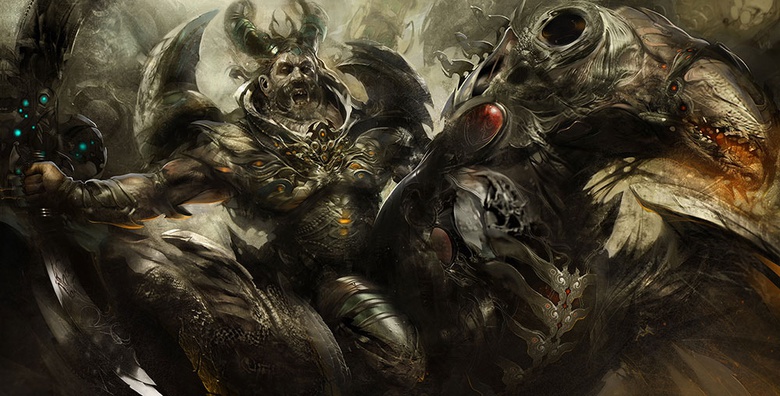 I added a green tone over the entire image and also added areas of color Turkish blue to the illustration. I completed the finer painted details and soften the background to make the character pop.

Finally I added final elements to the image, such as the spot lights, details of the dragon's face and ream lights, and reflections. 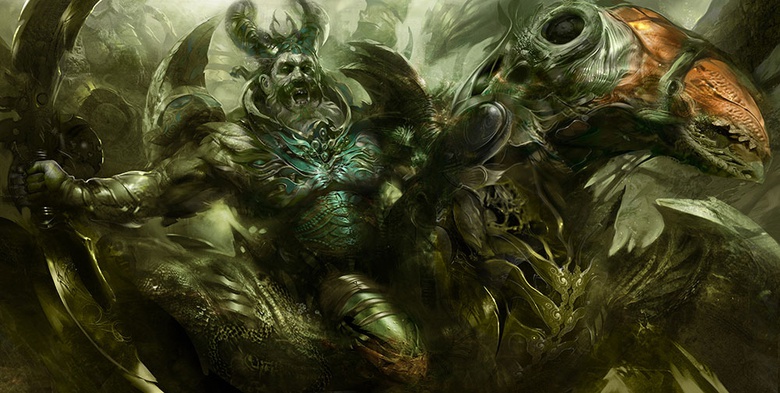 For more from Ali, check out their website
Grab a copy of Beginner's Guide to Digital Painting in Photoshop: Characters