The Making of McCafe

Moumene Sofian works through the modeling and rendering processes used in the creation of July's gallery award-winning scene, McCafe... 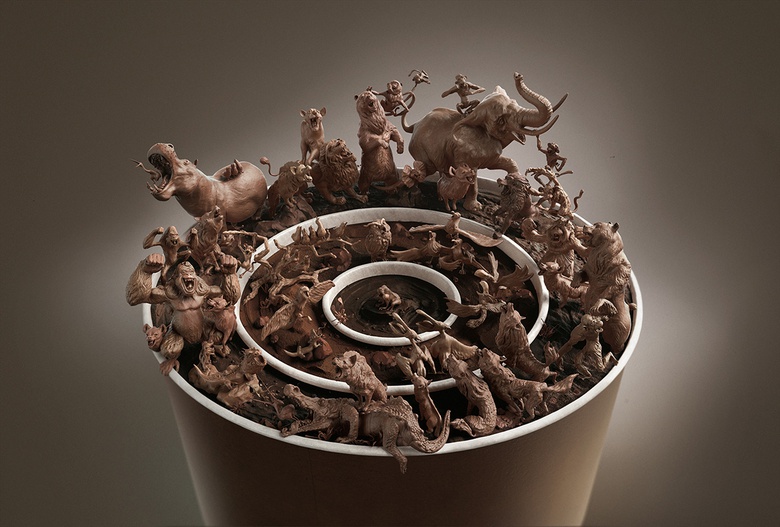 Moumene Sofian works through the modeling and rendering processes used in the creation of July's gallery award-winning scene, McCafe...

Hello, my name is Moumene Sofian and I'd like to guide you through the creation process of one of our images made here at Carioca Studio. It was made for McDonald's with the help of the DDB agency in Vienna.

Before I start with the walkthrough, I want you to know that this image was made as part of a 3 image campaign, and the other two images you can see here below.

The complete set of visuals made for McDonald's

The idea and rough sculpting

The brief came from the DDB Tribal agency group in Vienna, and after we sorted out the details we started to build the characters in ZBrush. The characters were made by my talented colleague Mihai Mihail.

We loved the idea of the ad as soon as we read the brief. The ad was for McCafe and the idea was that the bigger the cup the stronger the waking state – in this case this was generated by different noise sources: i.e. animals, race cars and musicians.

First we gathered references for the modeling stage and we tried to choose the best-fitting characters to tell the story.

The character creation process was a long one mainly because of the huge number of characters and because they had to be expressive and have enough detail to make you keep looking at them and discover each little story. It took around 4 weeks for each visual so we had lots of going back and forth with the agency until everything was right.

The ideas for each of the animal, musician, and racer elements of the scene

The concepting was made in ZBrush. We used DynaMesh because it is so easy to work with, and then retopologized inside ZBrush to better add details. At the end we decimated and exported all the characters.

Some of the individual concepts for the animals

At this stage we had to find a balance between the number of polygons and the details, because we had to limit the polygons in order to contain all the characters (there were roughly 30-35 characters). The final scene had around 25-35 million polygons. For the very heavy characters I decimated them further just in the viewport with the help of the pro-optimizer modifier from 3ds Max.

Then we took some references from the internet and modeled the coffee cup and distorted it to fit the camera angle and character layout. 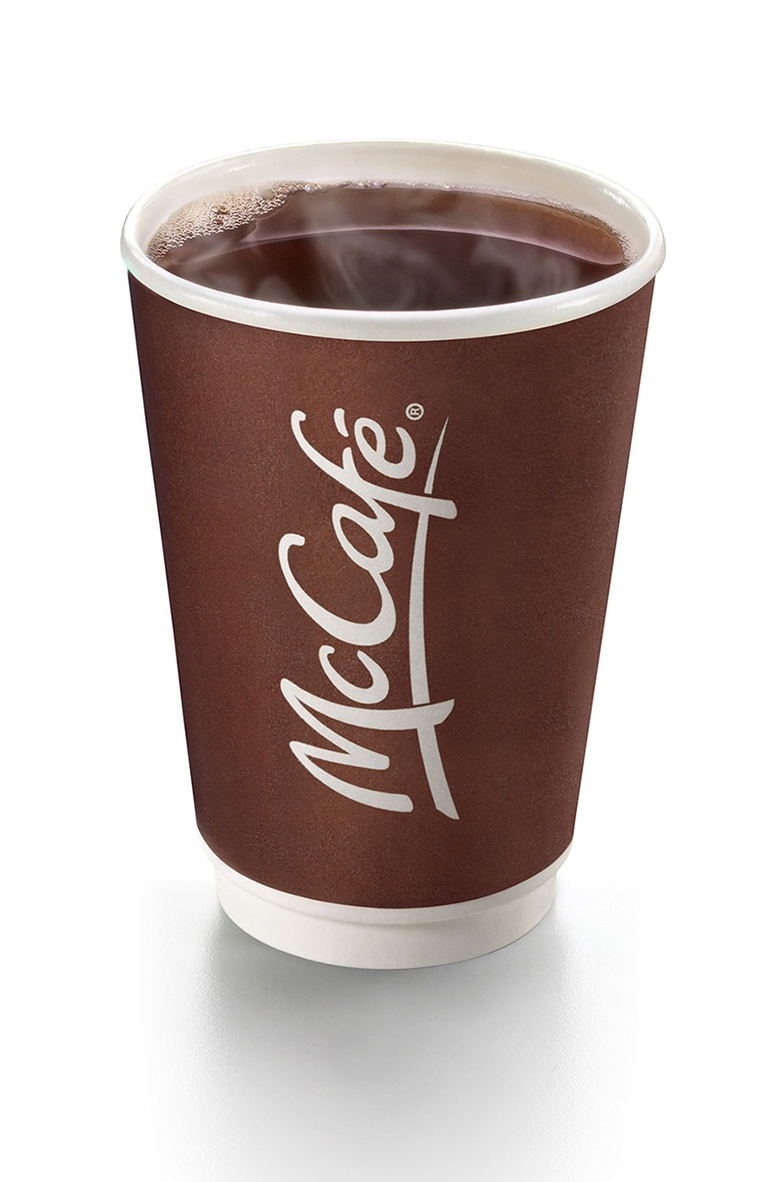 Making the coffee cup using references from the internet

The coffee base and added environmental features like grass, were made partly in ZBrush and partly in 3ds Max. We used MultiScatter for the rocks. 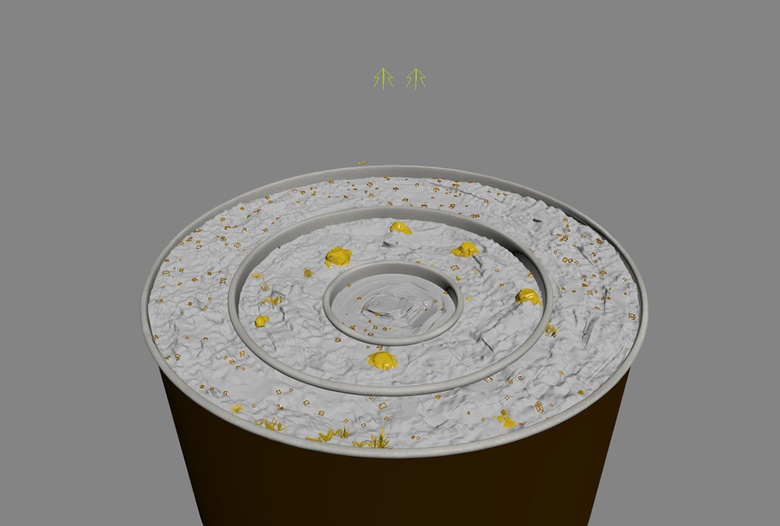 Adding environmental features to the coffee base

After we finished the modeling process and the agency approved the final scene layout, we started to light the scene. We used the HDR light studio because it is a very quick and reliable lighting tool.

Lighting was more of a trial and error process because of the large number of characters and their circular arrangement. Although it was not a complex light setup because we only used a single HDR map, it took some time to fit the light in order for each character to look good. 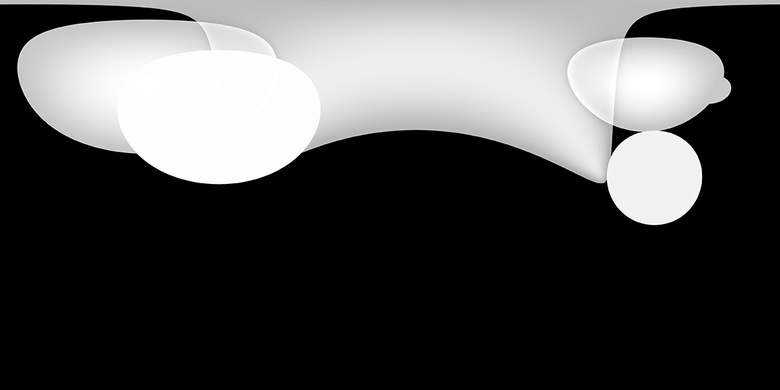 The HDR map used to light the scene

We skipped the unwrapping process of all the characters in order to gain some time. In its place, we just applied a UVW map modifier in 3ds Max because we used a shader with a fingerprint map made by Pablander in the Glossiness slot and in the Bump slot.

Finding the shaders was a trial and error process and in the end we tried several shaders. First we tried a simple gray shader but it didn't create the feeling we wanted – although the characters were very readable. Then we tried a liquid coffee shader but of course it was a mess because you couldn't understand the shapes well.

In the end we used the clay shader and added some more detail to it with a normal map with wrinkles and a fingerprint map to the bump slot, and it created the effect we wanted to achieve.

Texturing the scene using shaders and a fingerprint map

The render was at 8,000 x 5,000 pixels and had as many V-Ray channels as we needed for the post-production stage. The post stage was made as usual in Photoshop and it was a straightforward process – nothing too fancy. It consisted of color corrections and a depth of field effect and some background editing. 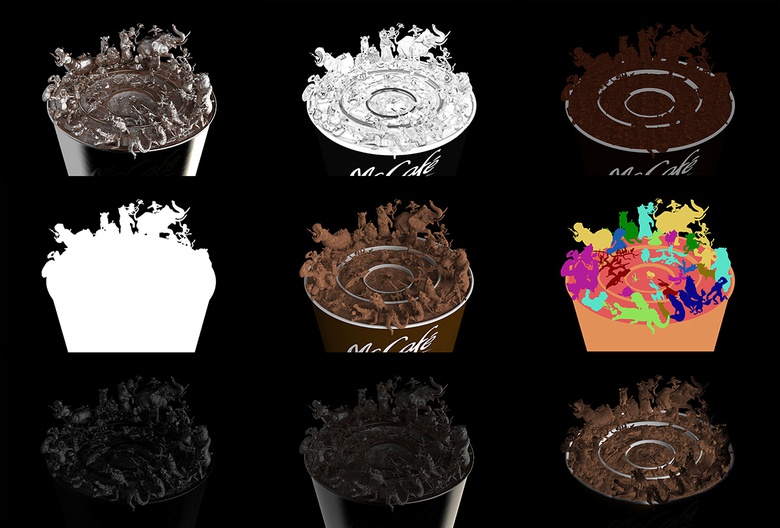 Some of the render passes used for post-production

It was fun to work on this project and we all learned a lot. For me, the challenge was lighting multiple characters with the same HDR.