The making of ‘Helena Shin’s Self-Portrait’

Artist Helena Shin shows us through the process of modeling a 3D model of herself through this detailed tutorial, using the techniques of sculpting and more...

Hello everyone! I'm lead character artist Helena Shin. In this tutorial we will look at the making of my latest creation work Helena Shin’s Self-Portrait. And I'm going to focus on portrait modeling, sculpting, and texturing XYZ, pbr texturing, shading, and hair. Okay, let's get started!

Prepare photos before work on FaceBuilder in Blender

First of all, several pictures from various angles were needed for this self-portrait work. So after setting up the camera tripod, I took pictures from various angles such as front, side, top, and so on. The important thing here is that the camera lens came out a little longer than my actual face because of its focal length. So I adjusted my face ratio later by scaling in ZBrush. For your information, I recommend that you don't take a picture with a beauty camera app on your smartphone.

I created my face base object and texture using FaceBuilder in Blender. Before using this software, I couldn't find a way to 3D scan my face for personal reasons. Fortunately, I heard that FaceBuilder plug-in was newly released in 2019. Yes, FaceBuilder​ is an add-on for Blender for 3D modeling  human faces and heads based on photos. So, I was able to study Blender a-new in January 2020. And I had to practice more than 5-6 times to create my face object. I recommend this software to someone who is unable to use a 3D scan. 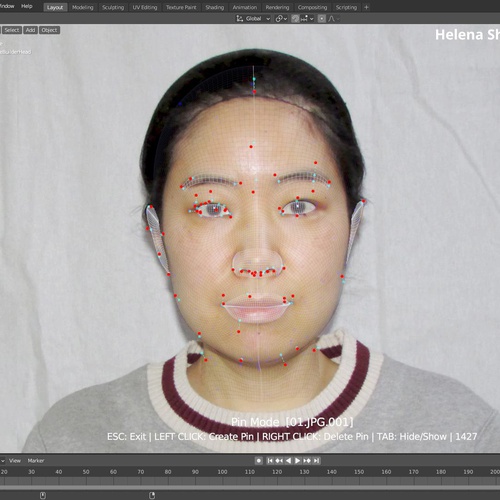 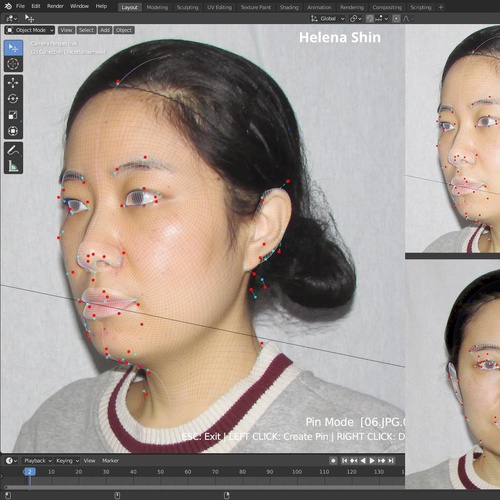 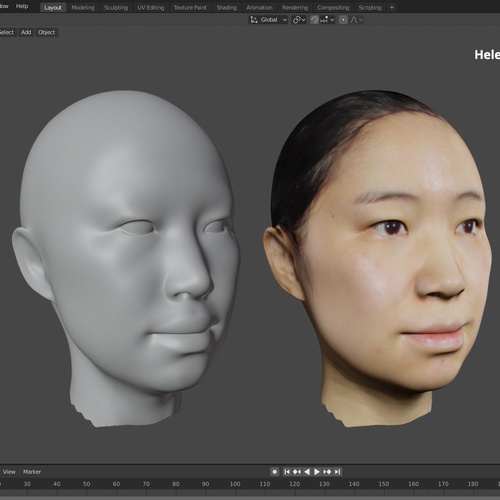 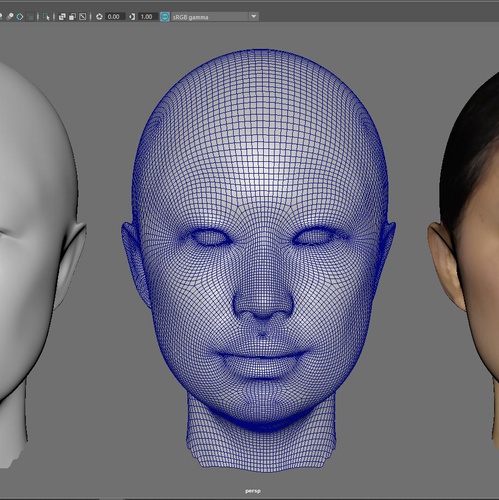 Import object (OBJ), texture from Blender into Maya and check

This head was created in Face Builder, but I couldn't use it because it has a lot of faces. So, after creating a topology based on it in Maya, I combined the body and head into one. And the body and head were created taking into account the movement and flow of the muscles with a middle polygon.

First, the finished model of the topology was imported to ZBrush. And I don't have many wrinkles on my face and the facial bones are not prominent. So I just trimmed it in base modeling and sculpted some more facial muscles, then adjusted the ratio to close to the actual facial ratio. Also, I usually don't use a special brush when sculpting in ZBrush. My main brushes are Standard, Inflat, FormSoft, DamStandard, Move Topological, and Move. And then I only set and sculpt the intensity, draw size, and focal shift options of the brush.

Zwrap for texturing XYZ in ZBrush

Texturing XYZ is a necessary stage to create a realistic skin. Before doing detailed work on the 3D painting program, I did a texturing XYZ base projection in Zwrap in ZBrush. This is avery simple work, and even beginners can do it quickly. However it will be insufficient detail to use this projected texture as it is. Therefore after exporting this projected texture extracted here, I’m going to take it to the 3D painting program, Mari.

To detail the textuirng XYZ work, I import the previously exported projected XYZ map from Zwrap to Mari.  I did detail work elaborately with the projection tool in Mari. Tthe best thing about Mari is that it can do a detailed projection, so I always use Mari when doing texturing XYZ work. After the projection was completed, the maps for each RGB channel were exported individually. 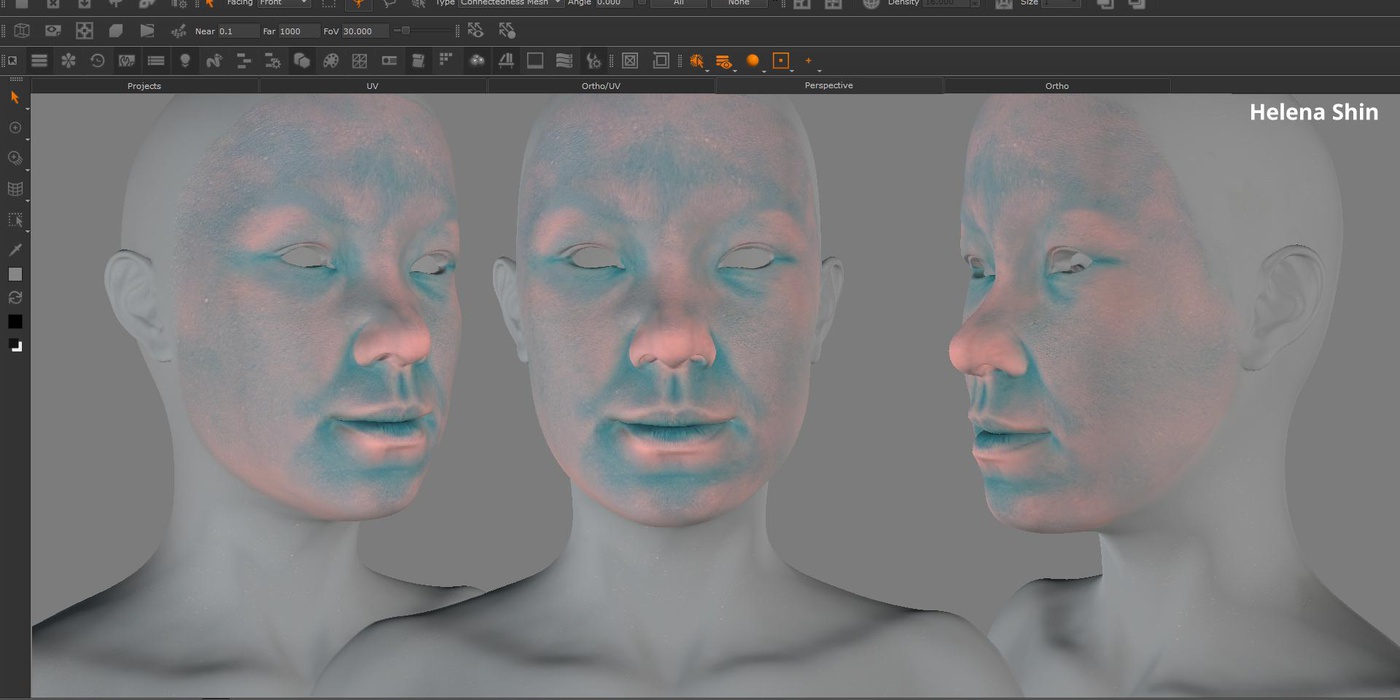 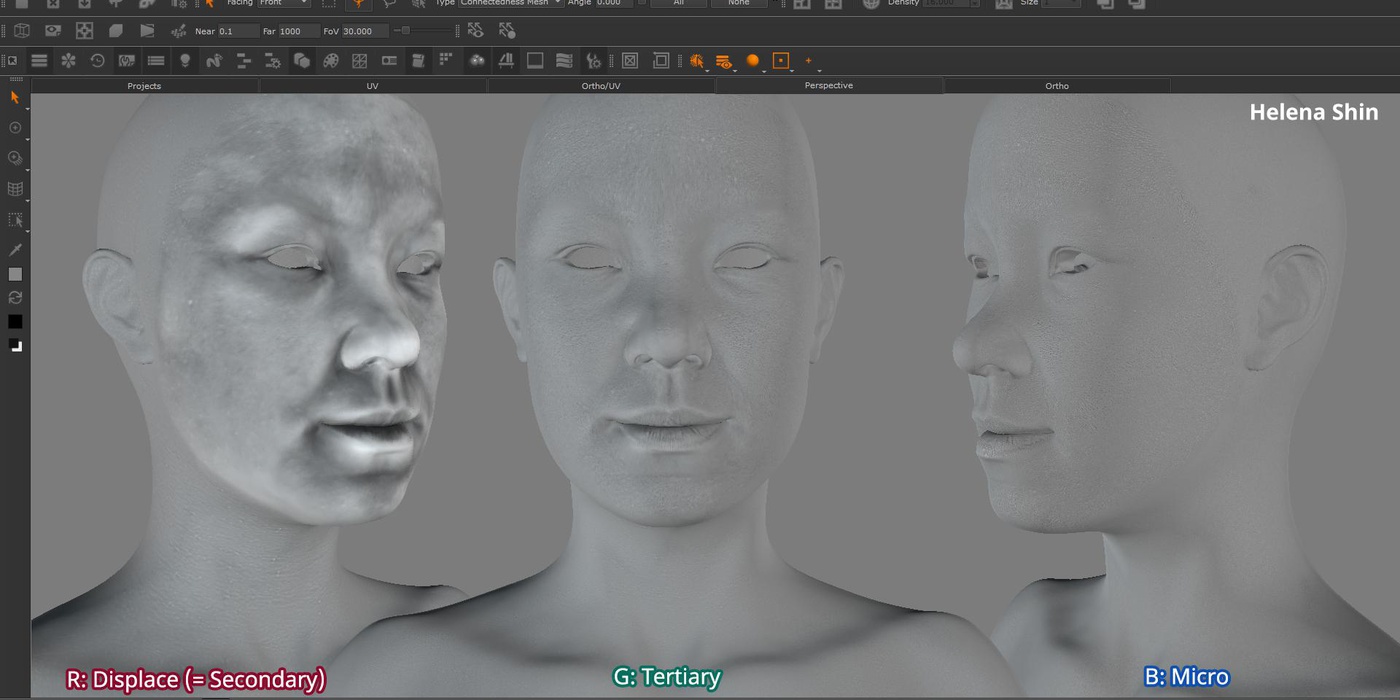 XYZ maps projection in detail in Mari and XYZ- R, G, B channel in Mari

Apply RGB displacement textures to the face in ZBrush

I imported the maps into alpha and applied DispMap in ZBrush. Also, each of the displacement maps applied to different layers, because I was able to control and adjust the intensity of each of the layers. After that, I created another layer to sculpt in some more details carefully, but not too much.

Here's a tip: If you make many modifications or resize a lot in these applied displacement layers, it will be ruined. Please be careful and modify it! 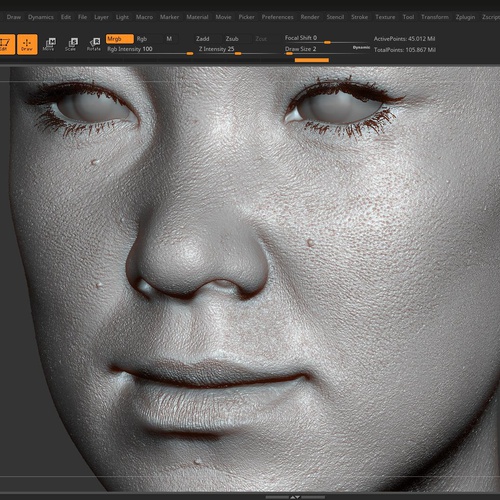 XYZ maps to apply displacement in each layers in ZBrush 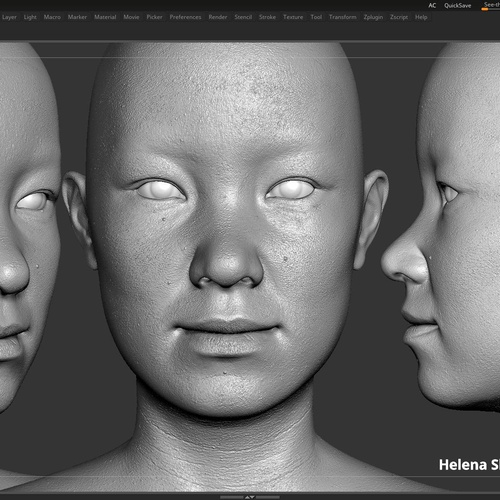 Applied the displacement maps in ZBrush. (Pers, Front, Side veiw)

The face was painted in Substance Painter. I created three  PBR textures. (Base Color, Metalness, Roughness). Among them, I worked on the base color in detail. The skin base was created with Painter's Generator and Procedurals, and I drew it with the additional 'Dart 1' and 'Dart 2' brushes. Ffreckles were painted with 'Kyle’s Real Watercolor - Salt Medium' and 'Kyle’s Real Watercolor - Spatter Spread' brushes.

Also, the glittering glitter of the eye makeup was expressed with 'Kyle’s Spatter Brushes - Stars 1' brush. All of the brushes I used are the default built-in brushes in Substance Painter 2020. With the rest, I've created a Rougness texture for glossy skin and makeup, and a Metallic texture for glitter eye makeup. The finished PBR textures were exported from Substance Painter and used for Arnold rendering in Maya. 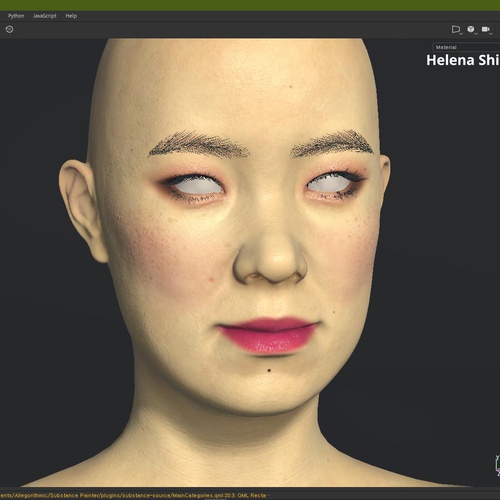 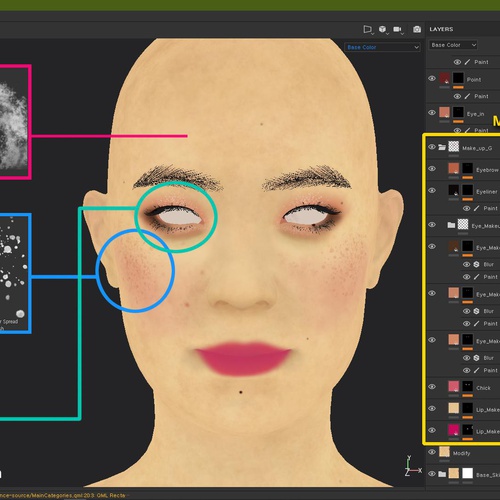 I used Arnold's Ai Shader in Maya to create it looks like a real skin. I imported PBR textures and applied them on the each of nodes of Base Color, Subsurface Color, Metalness, Coat Weight, Specular Roughness, and Displacement Shader.  I set Subsurface Scale to 0.2.  In that case, you will need to adjust the subsurface scale depending on the size of model.

In addition, the metallic texture was shared with Arnold shader's metalness and coat weight. And the reason for using the coat weight was to add a feeling that the glitter of the eye makeup was reflected brighter by the light. Finally for the Sheen layer, the color was set to a sky blue color to give the outer layer of skin a bluish feel. Also Sheen weight value was set at 0.1 and applied. 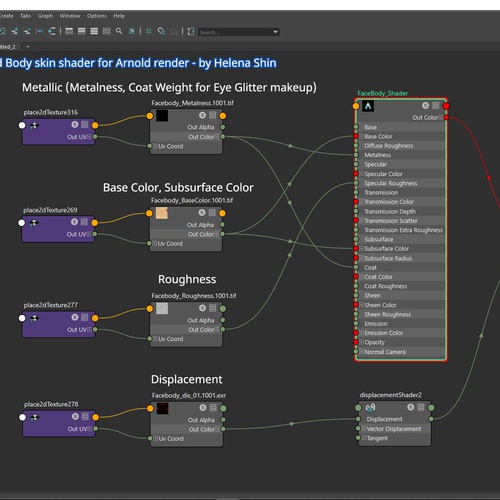 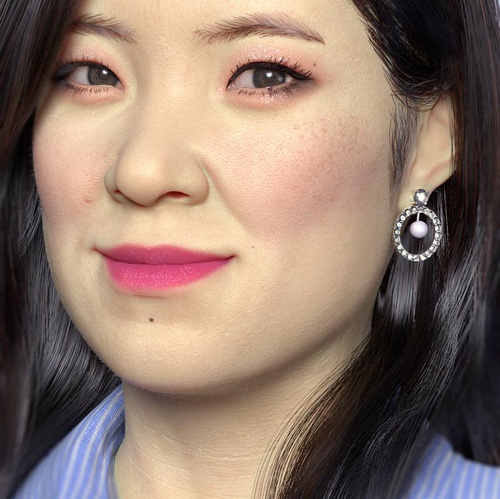 Reference pictures for making a dress

These are the pictures I referenced to when I made the dress I wore in the portrait. I collected pictures for the dress I wanted to wear, and I combined the designs of the two dresses that I liked the most. I really want to buy this dress if they actually exist. (I love it! HaHaHa)

After, I chose 'Cotton_Heavy_Twill' provided in Physical Property-Preset for this dress, I applied the simulation to create a pleat that matched the dress.

I imported the dress object made in Marvelous Designer into ZBrush. Then, I modified the silhouette of the dress to fit my body, and detailed the pleats with brushes. My favorite brushes I used to sculpt the dress were Standard, DamStandard, Move, Pinch, and XMD_Cloth_Wrin. Most otenf I used the default brush in ZBrush. 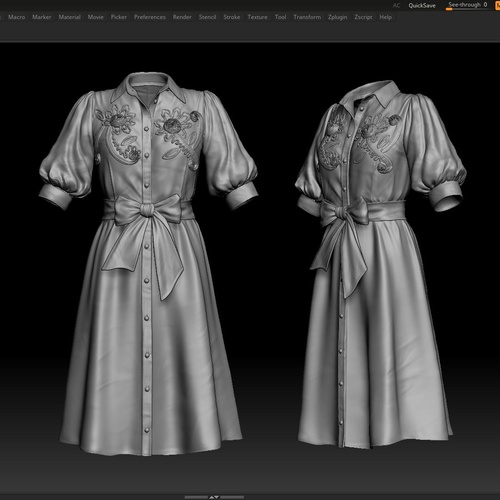 A detailed image of the dress in ZBrush 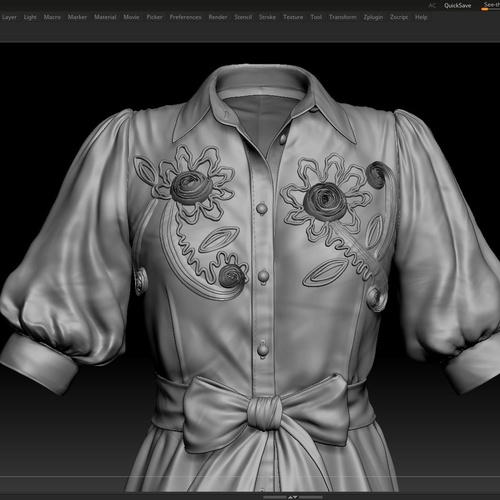 A detailed image of a dress upper body in ZBrush 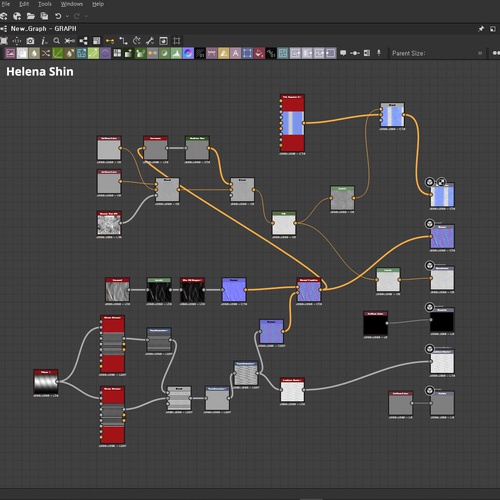 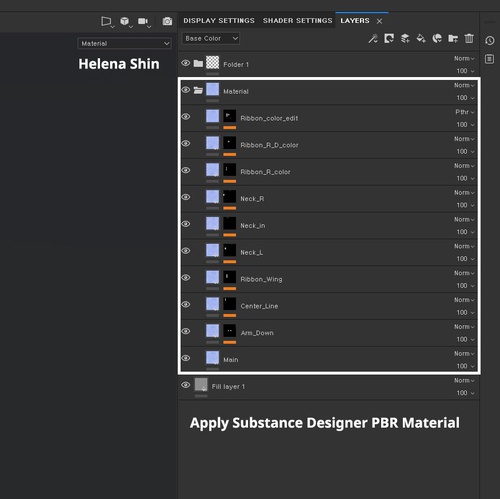 I imported PBR textures of a dress and applied them on  each node for Base Color, SubsurfaceColor, Bump, and Displacement. For the warm and soft feeling of the dress fabric, SubsurfaceWeight was applied like the human skin, and base color texture was shared with subsurface color. And Sheen Weight and Color were applied to give the fabric surface a subtle gloss.

In addition, the pleats and detail of the dress were expressed with displacement texture exported from ZBrush. To apply the fiber texture, normal maps  exported from Substance Painter were converted into bump maps in Photoshop and applied. Because when I rendered a test, the bump map expressed better results more than the normal map.

Create hair with FiberMesh and export curves in ZBrush

At first, I created hair in ZBrush before working on hair with XGen in Maya. I usually prefer to create hair with FiberMesh in ZBrush to predict the final image of the character in advance, and hair created here will later  be export as curves to create a hair guide in XGen. This suggests that each artist has a different XGen hair workflow, so I recommend that you work in a comfortable direction.

From now on, I'm going to explain my workflow. I used FiberMesh in ZBrush to create hair, then I did my hair using 'GroomHair Toss', 'Groom Spike', 'GroomHair Ball' and 'Move' brushes. Finally, for Maya's XGen hair work, I applied the value number of PRE Vis to '1', and then exported the minimum hair curves as *ma file format.

For your information, if you export too much hair curves here, it makes it difficult to work with XGen. (Of course, the file becomes heavier, too.) Please remember  it!

I think the best way to work on beautiful and  great hair with a hair guide is to keep modifying and organizing it. Of course it will take time, right?

Modifiers for long hair in XGen

For realistic hair expression, I applied Clumping, Noise, and Cut in Modifiers. In particular, I created natural hair curls by applying the Curl Effect and Offset Effect of Clumping2.

For those who want to make natural hair curls, I recommend Clumping's curl and offset effect functions. And with applied noise function, I've expressed a more natural, and frizzy hair feeling just a little bit. Then, I used the cut function to trim the ends of the hair, just like a real hairdresser trimming someone's hair with scissors.

I am Asian and Korean and have a natural black hair color. So at first, after creating Ai Standard Hair shader - Select black in shader's preset - setting Melanin Redness to 0.550 and Melanin Randomize to 0.5, I made it closer to my original hair color. Finally, I set the Shift to '3.6' in the Specular Layer so that it was able to be rendered with a soft hair reflection. ‘3.6' value of Shift is owned by Koreans, Japanese and Chinese, and related reference has been uploaded to Autodesk official website.

I set up the camera, key light, and fill light for the final render, and rigged it with Human IK for the pose. Also I created a simple two type of Blend Shapes, and made the final cut with a smiling expression. Finally, the render image size was set to Render Settings - Common - Image Size - Presets: 8 x 10. And this size is same to 2400 X 3000 pixels.

If you resize this big size to 1080 x 1350 (4:5), it will fit the main feed size of Instagram, so please refer to it who want to post on Instagram later. That concludes the making story of Helena Shin's Self-Portrait creation! Thanks for reading to the end! Be happy! 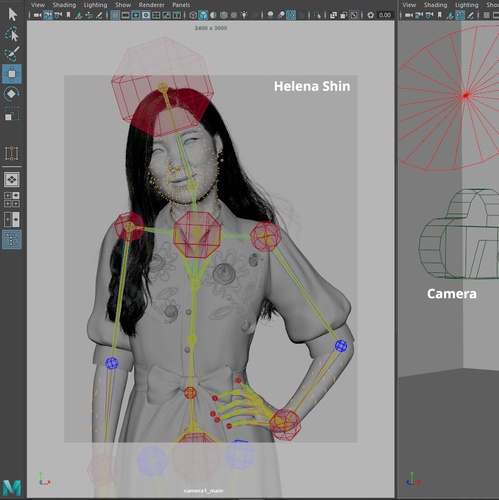 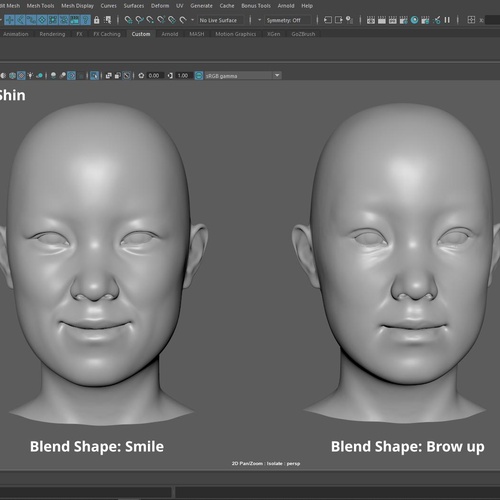