Learn how to use HitFilm in conjunction with iClone to take the visual effects in your animation to the next level... 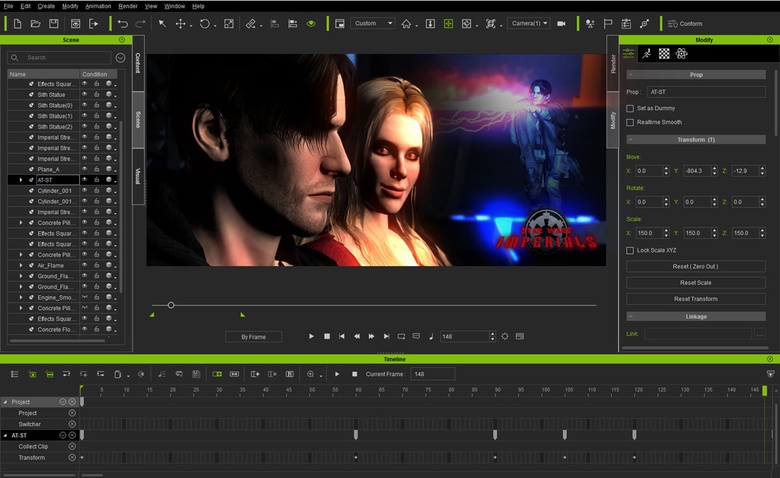 Learn how to use HitFilm in conjunction with iClone to take the visual effects in your animation to the next level...

HitFilm provides a wealth of masterable effects for films. Combining footage from iClone with editing in HitFilm can enhance a rendered clip with excellent effects, color grading and more. HitFilm and iClone enable video veterans or first-time filmmakers with tools that can accomplish a variety of satisfying shots with minimal complications.

iClone is a great piece of 3D software for creating animated films, but there are times when you'll want to add some additional effects to really bring your scenes to life. Fortunately, HitFilm makes that easy and I'm here to show you how.

We're going to be talking about how HitFilm was used to add some force lightning effects into a key scene in upcoming fan film, Star Wars Imperials.

A detailed video showing the complete process is included and I've outlined the steps I've taken in this article to explain the process. To see everything in action, watch the video.

Before we begin with HitFilm, we want to take a good look at the scene in iClone and ask ourselves, what can we do here that will make the effect look better and more believable. Since the effect we'll be adding is lightning, we'll want to light up the surrounding characters and objects. We'll achieve this by placing spotlights near the source character, a point light above the scene, and attaching another spot light to the target character. 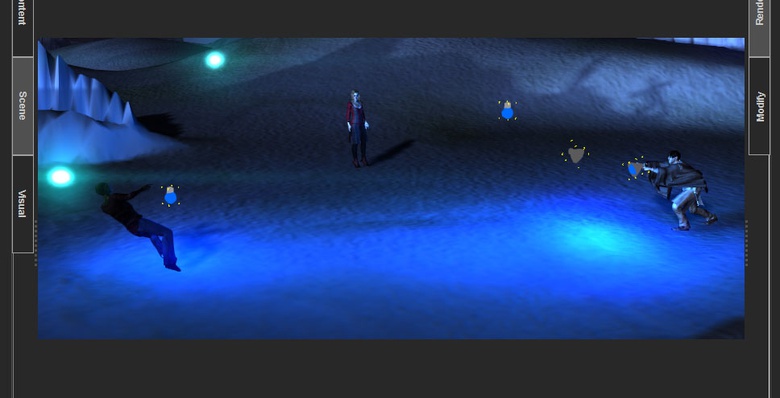 It only took a few minutes to add and position these lights, but that was time well spent as it will make a huge difference when we add the lightning. While not every effect is going to light up your scene, it's worth thinking about how else it might have an impact, and seeing what you can do in iClone to make it look more convincing.

Once you've completed your scene, you'll need to import it into HitFilm. Create a new project in HitFilm and from the media tab, click the import button. From here, select your video file and click open. Finally, drag your footage onto the timeline.

Now that you've got your footage ready, the next step is to go through and break it up into smaller clips. You can use the slice tool for this and ideally you want a cut every time the camera cuts to another angle.

When that's done, select the first clip and click on "Make Composite Clip". This creates a mini project for just the chosen clip, and it's here we will add the effects we want.

While you could begin with playing your effects right away, there's a very useful tool that will save you a huge amount of time, it's called motion tracking. This allows you to highlight a certain part of the frame, such as an object, and HitFilm can track how it moves through your video clip. We'll be using it to track the hands of the character casting the lightning effect. 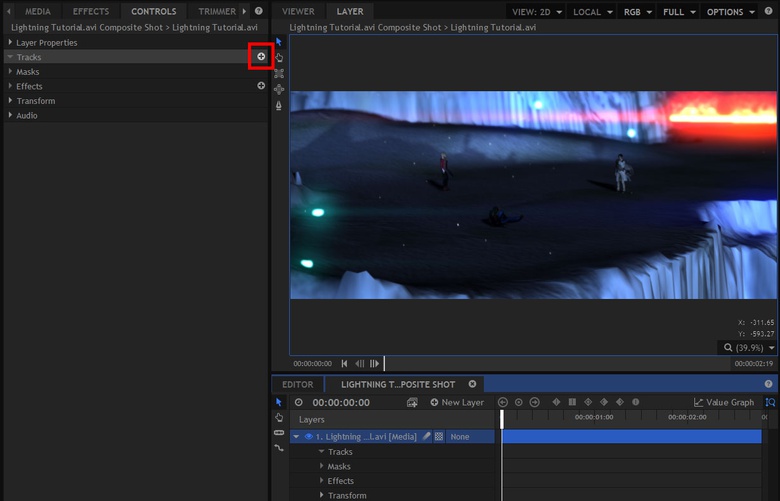 Select the video clip on the timeline, then from the controls tab, click the insert tracker button, as indicated on the screenshot above. This will place red and green squares on the video footage. The red square highlights what you want to track, the green square tells HitFilm where to look for it. Both squares can be resized and repositioned as you need to. The faster the object is moving, the bigger you'll want the green square, but don't make it too big as it may track the wrong object by mistake.

In the screenshot below, you'll see we've zoomed in close and placed the red box around the character's left hand, with the green box placed around it. When you're ready, click the track forward button, as highlighted in the screenshot, and HitFilm will go through your clip, tracking the object it detects in the red box.

Occasionally you may find the tracking goes off course. To correct that, find the frame where it goes wrong and drag the red square back into the correct position. You may need to adjust both squares, depending on how the tracked object changes shape in your scene.

In this particular scene, we will be repeating this process twice more, once for the right hand and once to track the target of the lightning. After that, for every tracker you have, you'll need to create a point layer. Then go through each of your trackers and from the layer drop down menu, choose one of those points. Each tracker needs its own point and I like to give them related names so they are easier to manage. 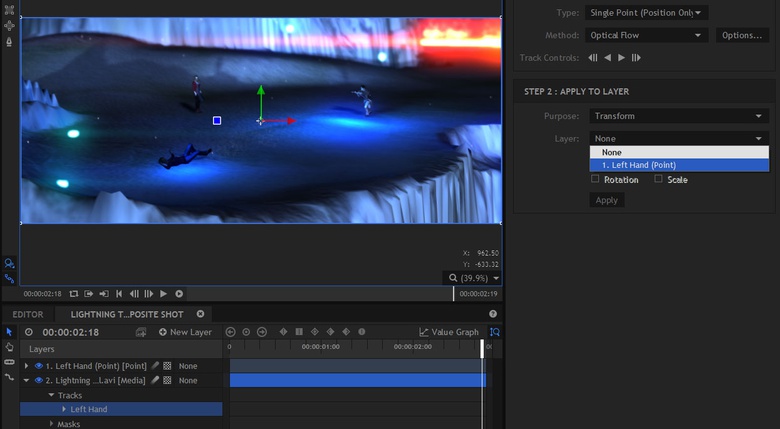 All of this sounds like it's an extremely complicated step, but it really just takes a few minutes.

Now we can place the lightning effect. Create a new layer, then from Layer Properties in the controls tab, set the blend mode to "Add". This makes anything that's pure black transparent, while other colors will blend seamlessly into the video layer behind.

Switch over to the Effects tab and you will find a complete list of all the effects available to you in HitFilm. Lightning can be found under "Particles & Simulation", select the effect and drag it over to the layer you just created on the timeline. 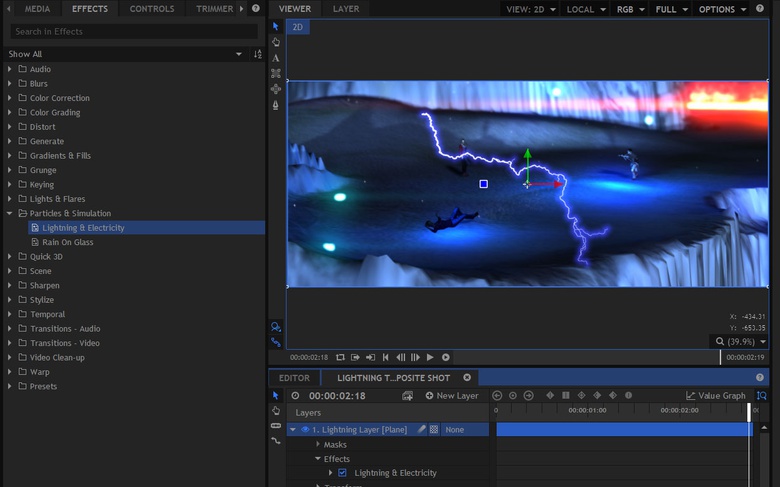 The lightning is there but not in the right place. Go to the controls tab and from here we can adjust various settings to give us the effect we want. The first things we need to change are the start and end point settings. With the "use layer" setting, we can attach the lightning to the motion tracking points we set earlier. 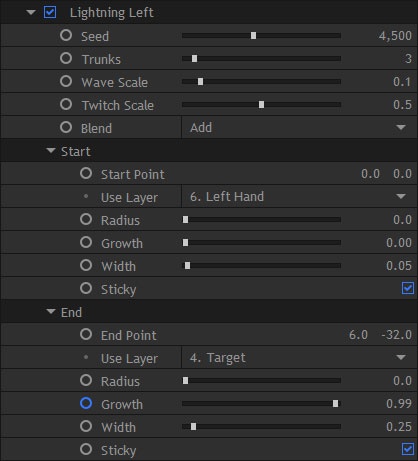 You'll also need to set the start and end point coordinates to 0,0. This will adjust the position of the lightning, making it appear from the character's hands and striking the target character.

It still doesn't look quite right though, the lightning is wider at the source, even though it's further away from the camera. If we change the start width setting to 0.05 and the end width 0.15, we can fix that.

It's already much better, but we're not quite there yet. Force Lightning in Star Wars is much more direct, while our lightning effect is arcing far too much between the two characters. We can change that by adjusting the wave scale setting to 0.1.

We're almost there; we need to add several more bolts of lightning. A simple matter of using the trunks setting. It's currently on 1 but changing that to 3 gives us more. It can go up to 50 but that seems a little excessive for this particular shot.

What we want to do next is duplicate the effect, so we have lightning appear from both hands. Rather than go through all this again, simply right-click on the effect under the controls tab and select duplicate.

You'll need to adjust the start point on the new effect to the other hand so it's not quite emanating from the same position. You'll notice the lightning looks like it's an exact copy, which isn't very realistic. Fortunately, we can change the seed setting to give the lightning a different pattern.

And that is how you add a lightning effect to your scene. There are many more options that let you change the shape, the color, the way it's animated and so forth. Every effect available in HitFilm has a lot of options, so you can customize them to suit your scenes.

The lightning effect is in our scene, but at the moment, it exists throughout the entire clip, even before we want it to be visible.

We're going to use Keyframing to hide the effect until we need it. Scrub through your clip until you find the first frame you want the effect to be completely visible. Then, under the controls tab, find the Growth setting for the lightning's end point.

Click the circle next to it to enable keyframing for this setting. This will save the current value of 1.00 for this particular frame. Scrub back through the clip to where you want the effect to be invisible, set the growth value to 0. HitFilm will then automatically fill in the difference between these two keyframes, making the lightning appear to leap out of the character's hands and hitting his target. You can use keyframing on almost every setting, so your effect can be made to change as your scene progresses.

We've finished all of the work on the lightning effect, but it looks a little out of place. What we can do here is enhance it with some additional effects. These will help it blend in and add a little more realism to the scene. Using much of the same process described in Step 4 and 5, we're going to add some light flares. One on the source character's hands and the other on the target character, to give the appearance of a powerful impact.

There are a lot of different types of flare but for our scene, we want to use Digital Blocks for the hands and Anamorphic Streak for the impact. We'll tie these to the left hand and target trackers, so that they move with the scene. 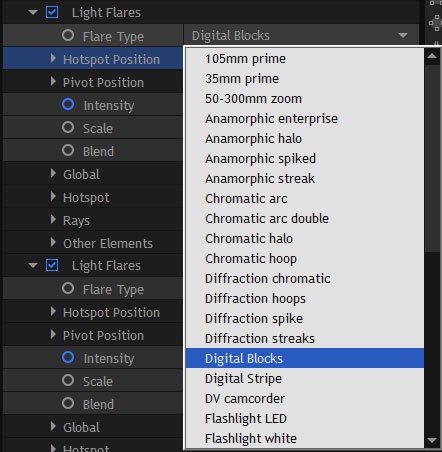 For this scene, I found both flares were a little too bright, so I lowered the intensity setting until I was happy with how they looked.

This only took a few minutes of extra time, but it was worth it to make the lightning feel more realistic and more powerful. To make your effects more believable take those extra few minutes and add the little details, even if it's a tiny puff of smoke. HitFilm gives you a lot of effects not just for big things like lightning or explosions, but for more subtle effects that can make your scenes feel more realistic.

Damien Valentine is an award winning animator from the UK. He has been tinkering with videogame modding and machinima since the early 90s which ultimately led him to telling stories through animation. Check out his YouTube playlist here.

His best known work, "The Death of Jar Jar" was a finalist in the 2007 Official Star Wars Fan Film Contest and used as part of Star Wars' 30th anniversary celebrations. Since then he has created dozens of short videos and even made a cameo appearance in the popular webseries "The Guild."

He is currently working on the sci-fi web series "The Chronicles of Humanity" and the fan film "Star Wars: Imperials." When he's not busy animating, Damien is a cosplayer and can often be seen at conventions in the UK.