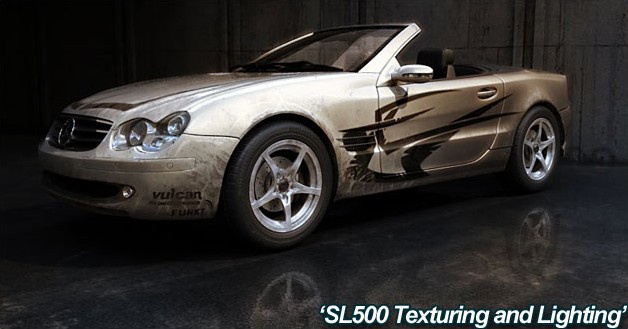 This tutorial uses 3dsmax 6+Mental Ray, Photoshop cs [although v7 definetly has the features used] Texporter and 3dtotal Total Textures 8, the model is one I made last year, so I wont go into the modeling process.

To start texturing the floor of the scene, I used this tarmac texture from the cd as a base to work from

This render is with the texture tiled onto the object, it isn't clear where the edges are of the texture, but you can tell by the patches of bright values that it is being repeated. 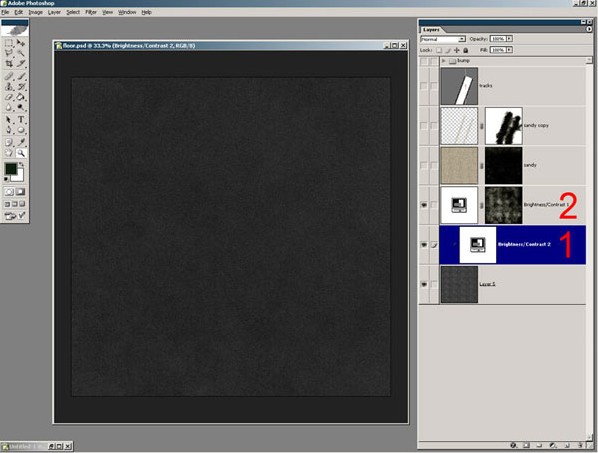 In photoshop I have added a brightness/contrast adjustment layer (1), to darken and give the image less contrast, and above that in the layers you can see another adjustment layer(2), which has brightness set at -40 or so, and then I have painted on the layer mask to make the bright patches and clear tiled areas not so noticeable any more. Next I have added another layer, this one is a sandy/dirt layer ontop of the tarmac. to do this I have used a texture from the cd, the texture is a stone wall/floor but it doesnt matter because I only needed an appropriate colour/texture rather than just using one plain colour. 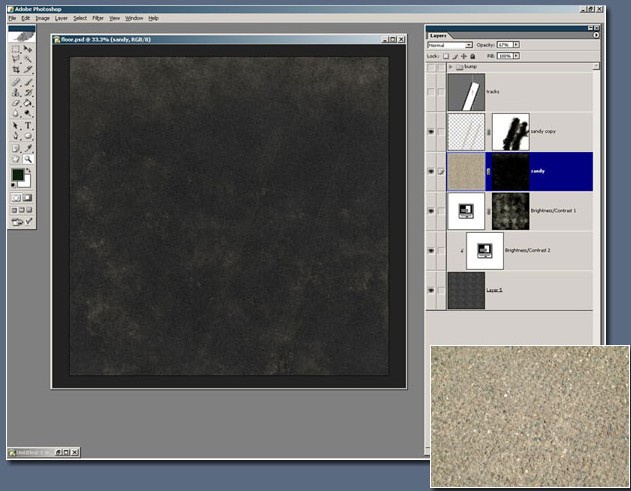 Then I added a layer mask and painted areas/patches of dirt on the ground, with quite a lot at the edge that meets the wall where the dirt would build up a bit. Also you can see another layer above that, using the same texture for the tracks that the car has made, these are very subtle, as the tracks are quite clear from the reflection on the floor, so they dont need to be to visable in the colour map. 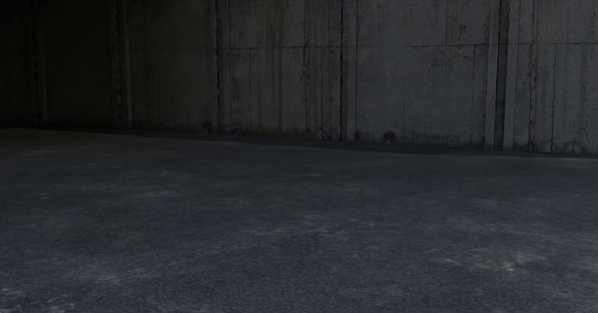 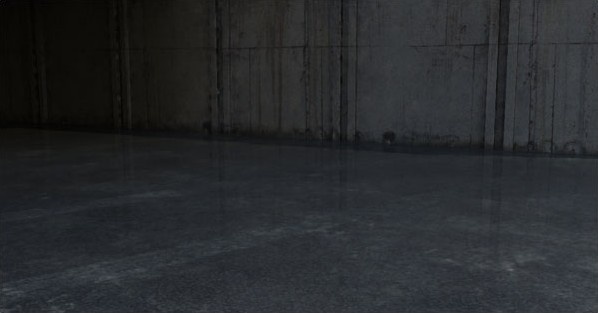 This render is with reflection, you can see the tracks are much clearer after in the mask of the reflection. 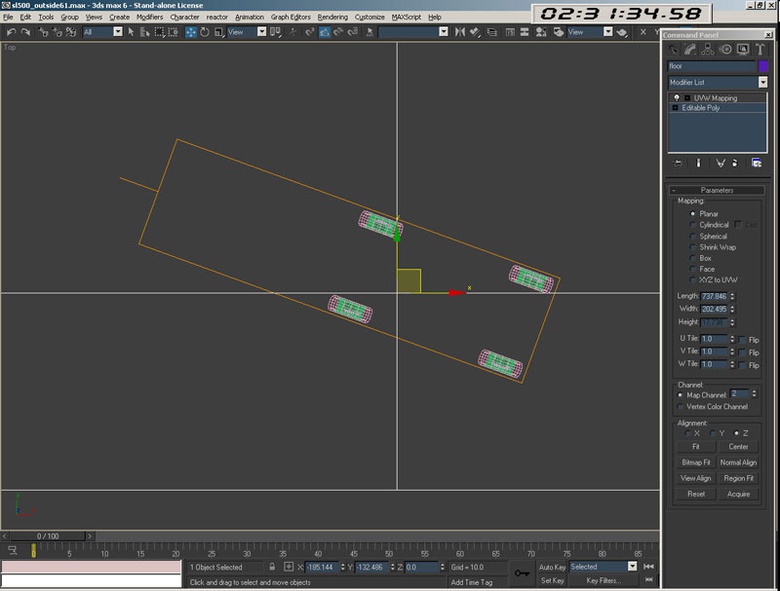 I made another uvw map for the tracks, on map channel 2and matched it up to the tyres 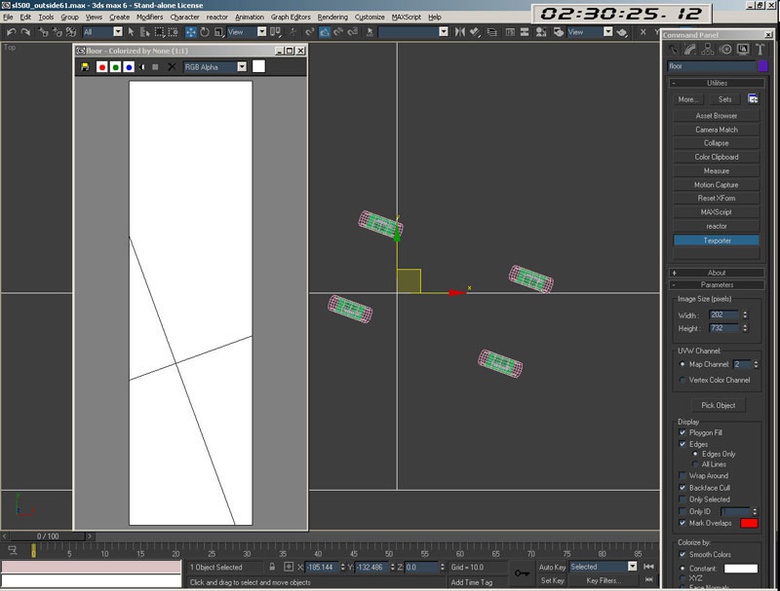 Then using texporter I exported out the uvw's to work on. The mask is just a tile of one of the bump maps that comes on the cd that I used for the tyres 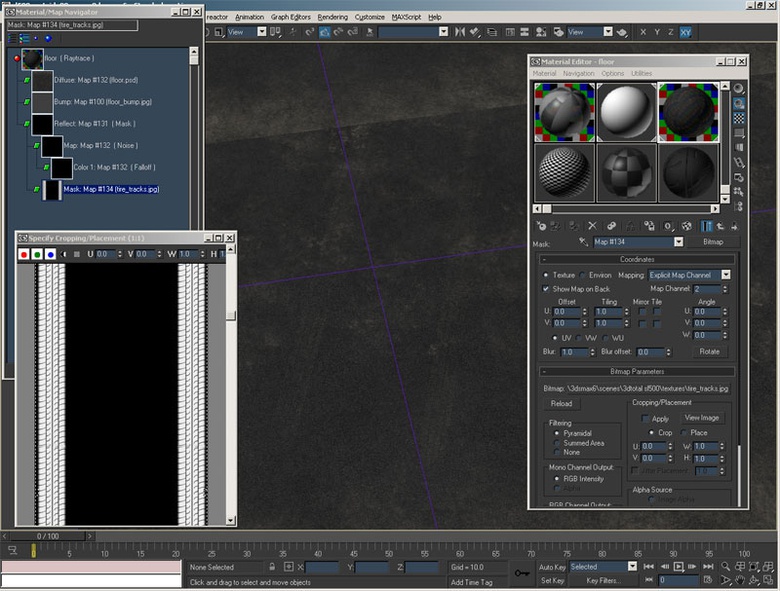 To start texturing the floor of the scene, I used this tarmac texture from the cd as a base to work from 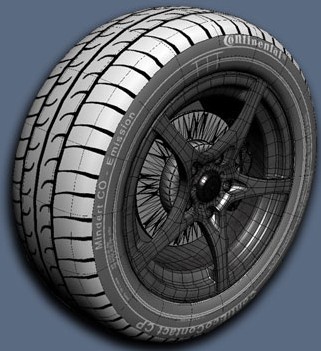 Heres a image of one of the wheels, the disc and the brake both come from the 3dtotal cd, along with the bump map for the tred. As you can see the tyre is split up into 3 sections on the model, they all use the same instanced shader in the 'surface' slot of the mental ray material. The Lume Metal Material (phong) may have to be unlocked before you can use it....

goto \3dsmax6\mentalray\include\lume.mi, open that in notepad and remove the tag "hidden"from that shader [or any of them] 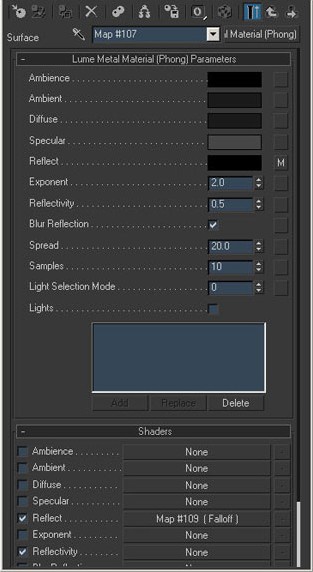 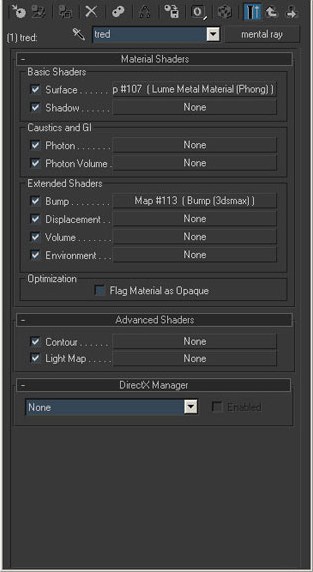 I used the lume metal material for blurred reflections, which I used again on the rims and the brake disc with a mask for the dirty parts on the material where it doesnt reflect.

The car was unwrapped quite simply, mainly with planar maps applied to certain areas of the car, and then any areas that needed to be adjusted, were altered in uvw unwrap 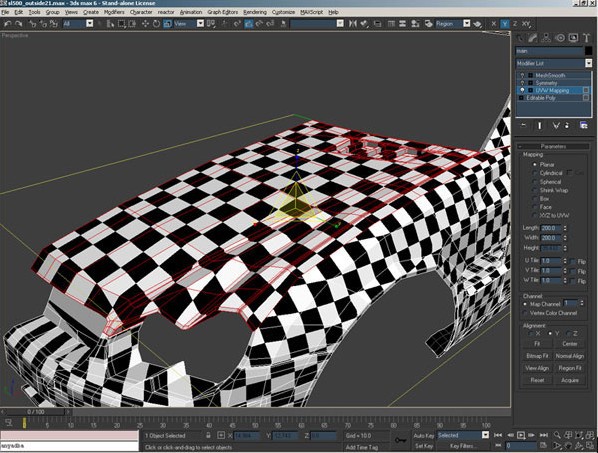 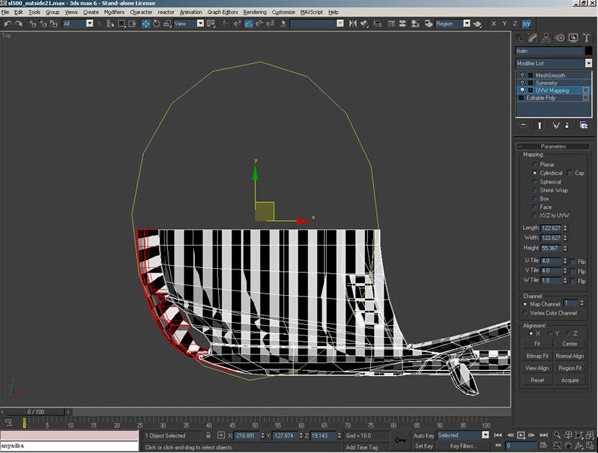 For the front bumper section I used a cylindrical map that fits pretty nicely around the model, then adjusted the U and V tilling to get the checkered material correctly square and undistorted. 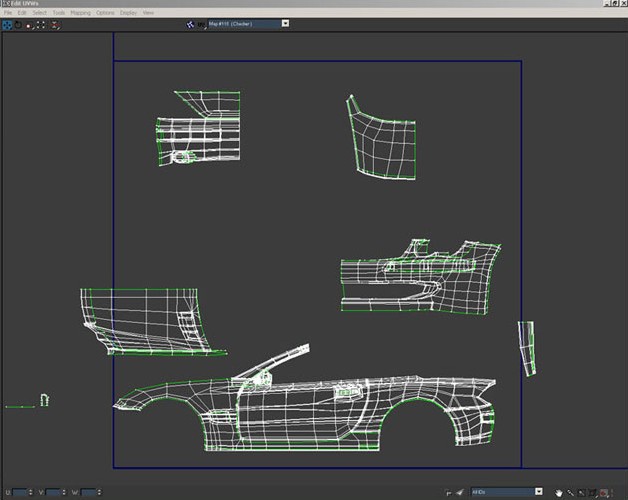 After all the parts have been unwrapped, I scaled all the peices down to fit into the main square. At this point, there is still just half the model unwrapped, so I add the symetry modifier to the model, go back to the unwrap window, and go through the process of fixing the newly created parts, which all contain uvw information, but they all need to be mirrored and attached to the other half. 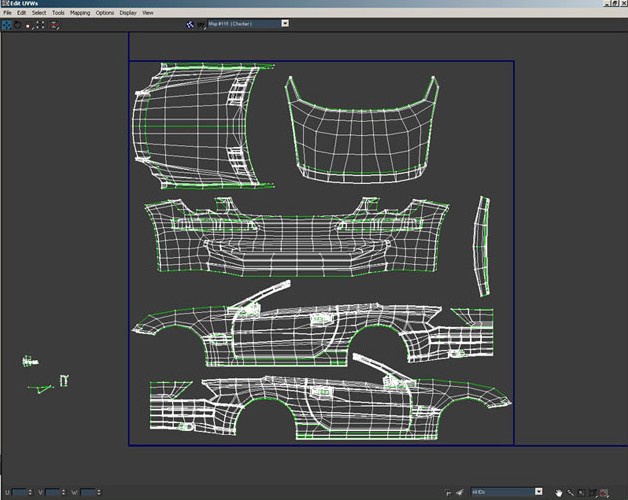 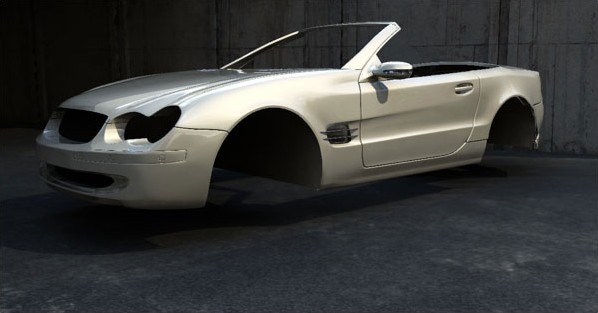 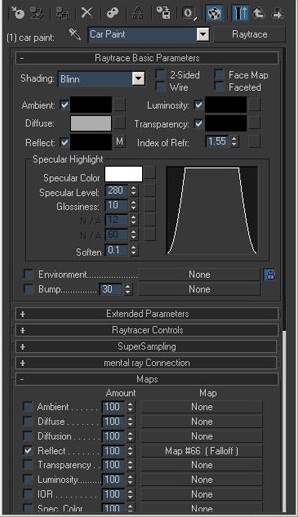 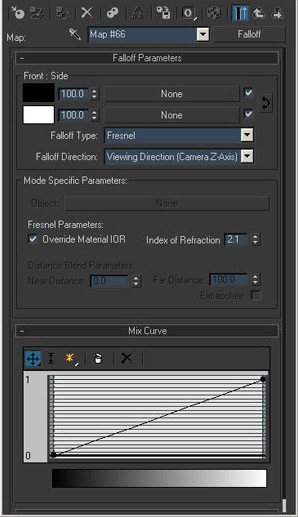 To start with for a basic material I used a fresnel falloff for reflections, set the IOR to 2.1 in this case, there is no magic number though, that would change in different environments, whatever I think seems best at the time, also on this material I used a large specular to simulate the metallic paint. 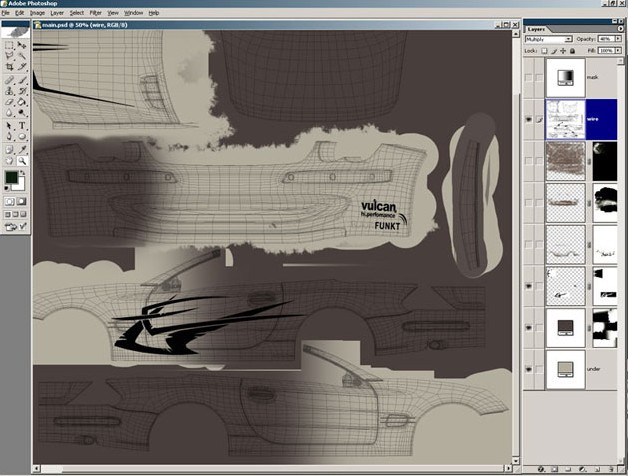 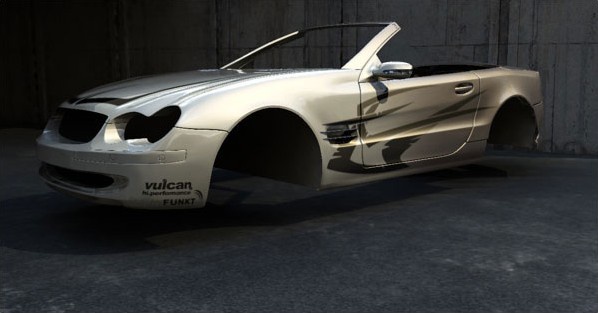 here I have added a couple of the decals from the cd, as well as added some of the areas of darker colour using a fill layer and painting on the layer mask to control where it is applied, I didn't expect too much from this but I think it came out quite nicely, its not to obvious and just gives it a bit more variation. 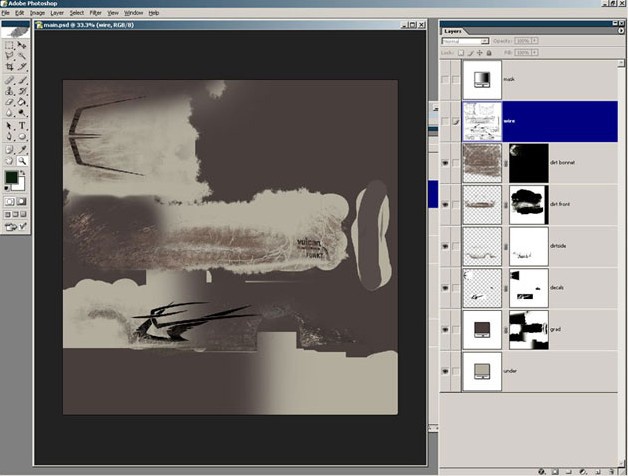 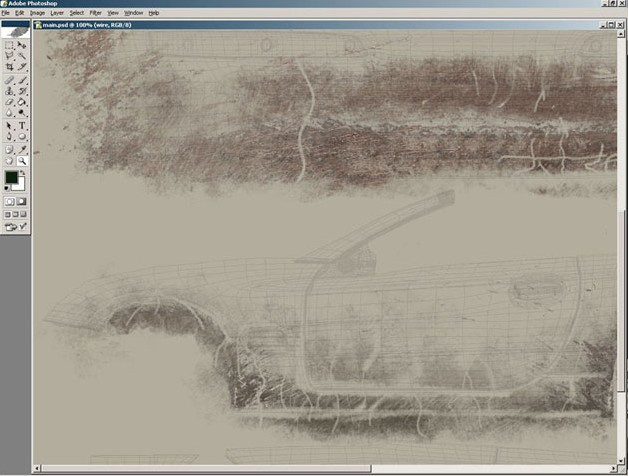 I have used the dirt maps that come on the cd, combining lots of them together to get the dirt in the places I want it, and using layer masks do erase from what was there. I started by doing smaller parts on separate layers and when I was happy, merging the layers together so I could paint though what was several layers in one go, to make streaks from water/rain, that kind of thing. 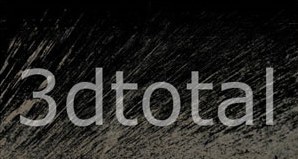 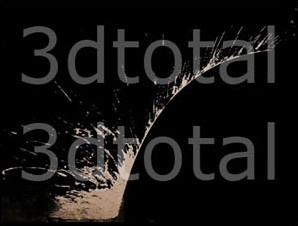 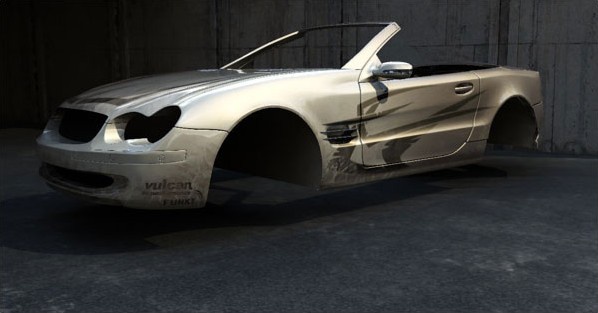 After this I also made a mask for the reflection to not reflect the dirty areas, as well as a mask so that the spec doesn't not effect the dirt OR the decals which would be stuck on top of the original paint work.

I used a HDR from Sachform.de for this scene, one went straight into the environment map slot (instance) and the second one was slightly blurred in HDR SHOP and also mixed with an orange colour in the material editor to keep the light from being too blue, then that was also instanced but to the sky colour in the skylight. 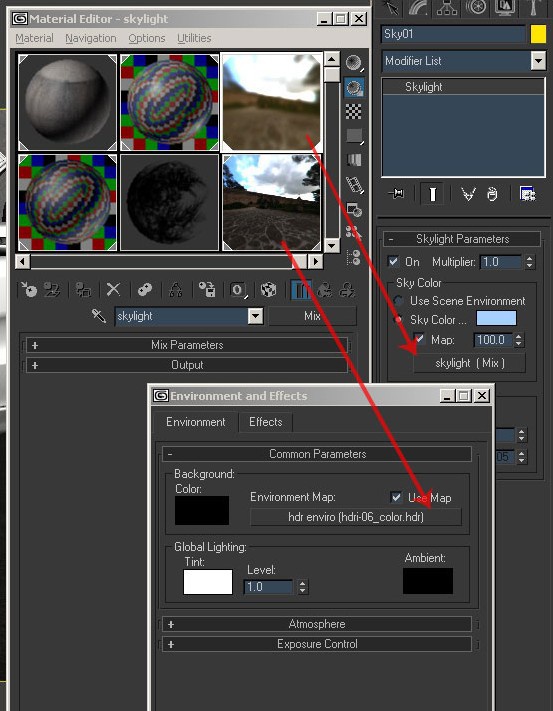 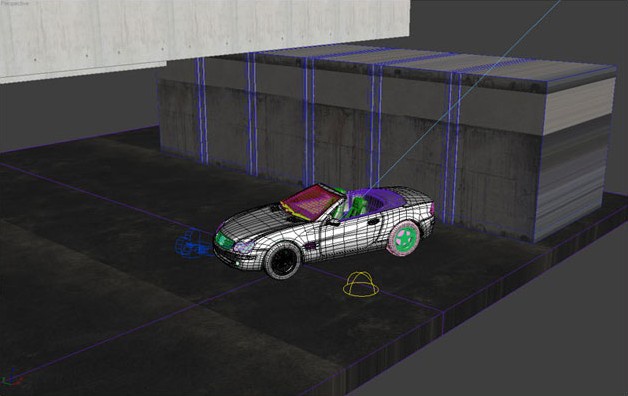 As well as the skylight, I have a 'mr Area Spot' light, with area shadows, and set very orange, at quite a low multiplier, 0.4 as I didn't want very dark shadows.In this image you can see how the scene is set up, I originally textured the back wall completely, but I decided that the scale of the texture was wrong so I scaled it down, I didn't want to change the lighting which I would have if I changed the shape of the wall behind the car, so I just adjusted the UVW's so you couldn't see the edges of the map in the render.

Same with the other textures, I didn't want to waste texturing areas that wouldn't be in the cameras view , so just the parts in shot are textured fully.

For this scene, I could get away with quite low settings for final gathering as the scene has quite dirty/messy surfaces, so gi artifacts wont be very noticeable, the min/max radius controls the size of samples, [this probably isn't technically correct, that's how I think of it] so if the gi isn't looking detailed enough this is probably why.For the anti alias settings I used 1,16 which should be plenty, and the mitchell filter is a bit sharper than the default. Those are the main settings to worry about for this type of scene in MR so far I have found. 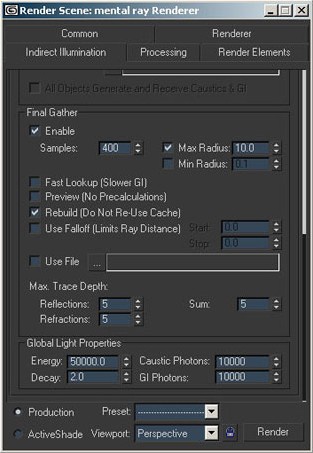 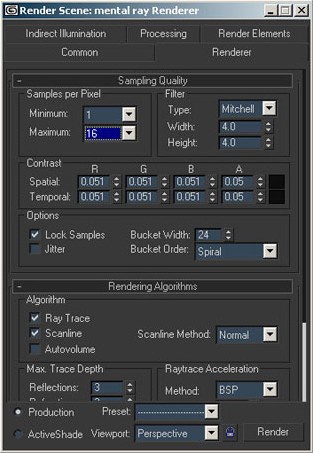 I use this particular technique quite often, and always do a bit of photoshop work after rendering from max, even if it is just adjusting brightness/contrast/saturation.

to start off with here is the render straight into ps

Duplicated the layer, leaving the original one incase it needs starting again from there. I decided the image wasn't quite sharp enough so I used the un sharpen mask filter and fiddle with the different sliders until I was happy

Duplicate that layer, this one is going to be overlayed on top of the base layer that has been sharpened, I used a maximum filter on it to expand the highlights a bit.

then use the gaussian blur filter, just enough so it is all smoothed out and there isn't any of the jagged bits from the maximum filter

next is changing the layer blending for the top layer, I chose overlay on this one, although soft light/hard light/lighten are also ones that I use quite often, then adjust the opacity to whatever looks best. Its hard to explain what each blending mode does, [although they are in the manual] playing around with different ones with different opacity's is the best was to find out.

For the last step, add hue/saturation layers for both layers in use. If you ALT+click in between layers, you can set an adjustment layer to only effect the one is it attached to, as you see in the image above how the two hue/sat layers are both inset and have an arrow pointing to the layer they effect.