Hello, my name is Emre Ekmekci and I am a character artist at Sucker Punch Productions. This tutorial will detail the process of creating my latest portfolio piece called Native. I will start with introducing my early ideas for the design and mood of the character as well as the overall composition. I will then move on to the technical side of the project and wrap the tutorial up with lighting and presentation.

As per usual I started this project by gathering reference images that I thought would be helpful both for the design and execution stages. I had a rough idea about what I wanted to make but reference images from real life help me take the next step towards the design stage, where I solidify my ideas by utilizing the real life references and my artistic knowledge.

I started the design stage with a rough block-out in ZBrush followed by paintovers in Photoshop in order to set up the overall look and feel of the character. For this particular project I was inspired by Horizon: Zero Dawn, not only in terms of the feel of the character but also of the wild and beautiful mood of the world in the game, which ties back into the characters. I wanted to capture a similar wild spirituality coupled with high tech elements, creating a striking and appealing contrast.

The sculptures of Greg Polutanovic were another inspiration for this piece as I found myself having the need of adding some movement to the model. Even though it is a bust, having some wind in the hair and feathers is a good way to convey the windy, natural mood of the piece, which also creates more visual interest and a nice flow. 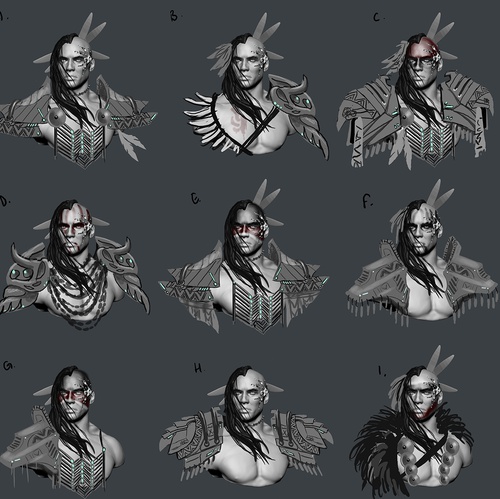 Once I had a rough idea about the pose and the mood, I started experimenting with shapes. Even though the final result is not one-to-one with any of my initial sketches, these experiments helped me have a clear idea about the composition and design 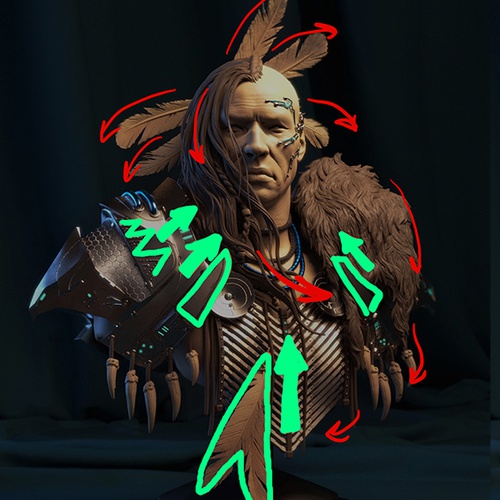 Green arrowsshow the pieces that lead the eye towards the face. Red arrows show the rhythm on the sculpt that leads to the green arrows and ultimately to the face

When making any kind of organic sculptures, I try to think (and look up reference) of the underlying structure and forms that would ultimately affect the look of the skin on top. For this particular character I went for a bone structure I saw on the old Native American photos, with high cheekbones, a long face, and somewhat smaller eyes which made him look very regal. I made the eyes squint quite a bit for the expression I desired.

I mostly used the Move and Clay brushes at first for the primary shapes, then went into more detail with Dam Standard, Clay, and Smooth directional brushes for the secondary and tertiary forms. For the surface detail I used various skin alphas as well as the standard brush with spray and alpha 58. I would also recommend using TexturingXYZ maps if you want to go full photorealistic, which I have used in the past, but for this project my focus was on sculpting and not necessarily achieving hyperrealism. I tend to slightly stylize some of the forms and overall shapes on my artworks for a better visual appeal, even if I make a realistic character.

One of the main ideas about this artwork was the intent to combine primitive and organic elements with high-tech inorganic materials and angular shapes. In order to achieve that I added some hard surface armor pieces.

I started by blocking out a rough mock-up version of the armor in ZBrush. It doesn’t need to be a clean geometry as long as the overall shapes are there. I then took the block-out into Maya where I retopologized it and created a base mesh to be used back in ZBrush. After importing the base back into ZBrush I added extra bits and pieces of the armor using Live Boolean function.

Sculpting hair and fur has its own challenges and requires a lot of patience. For the hair I did an initial block out where I utilized the Snake Hook and Move brushes a lot. After getting the desired shape on the hair, I used Dam Standard and Rake brushes to chisel the individual strands. Sculpting the feathers was a similar workflow. I made a base mesh in Maya which I then took into ZBrush and used the Rake brush to sculpt the strands. I used Snake Hook for the fuzzy edges.

I set up three lights for showing this model in KeyShot. One Key light which I placed a bit above the bust and closer to one side. One Fill light to get smoother shadows. And one Rim light which I made a cool color to have different effect than the other lights.

My personal preference about lighting is to make it dramatic but also soft enough to show the whole model. This lead me to place the Key light above the head which caused bigger shadows and hotspots on the head. I wanted the first read to be the left side of the face (the side with the embedded wire thingy) so I placed the Key light closer to that side.

After the rendering phase the images usually need a final push to get to the ‘portfolio piece’ level. It is important to note that the final touches don’t affect the sculpt itself, but increases the quality and visual appeal of the render. Everyone has different methods and different tastes when it comes to showing the artwork, but for me the composition is probably the most important thing.

To that end I added a layer of light color to the face as an Overlay layer with about 10% opacity. Overlay adds contrast so it’s better to use it with subtlety.  I also added a dark vignette to get the attention away from unwanted areas like the stand or the background. Finally, I added the lights on the armor and increased the overall saturation by about 7 or 8. With a little bump to the Red on the color balance to bring out the fleshy tones on the face and add some warmth to the overall image, the final touches were done.

Thanks for reading and a huge thanks to 3dtotal for asking me to write this tutorial! Apart from the technical side of this tutorial, I would personally recommend any aspiring and professional artist to do the projects that would satisfy their creativity rather than what social media or the majority demands. It may sound trivial to some but we make art to tell a story using visual tools, so the best result can be achieved by simply doing what you genuinely want to do and always improving yourself along the way.