3D character artist Akshay Jain takes us through the ZBrush, Maya, and Photoshop process behind his “Ghost Rider” concept riding through flames on a horse…

In this article I'll talk about the key information for approaching a 3D character from image in ZBrush. Here I'll talk about the character that I did for a client and divide it into collecting references, analyzing, production, and presentation. In between, I will share some random tips that helped me and might help you out there. So let's start...

Well in this case I already have a rough concept art from my client. But to further execute things and how much detail I have to put into each element like shoes, belts, saddle, horse, weapons, and so on, I started collecting references for that. My main motive was to collect images regarding western cowboys and their elements as mentioned earlier, and putting them in different groups on my reference board and sorting them out to not get confused. This part is very crucial and makes your vision clear when you start actual production on the piece, so give time to R&D. 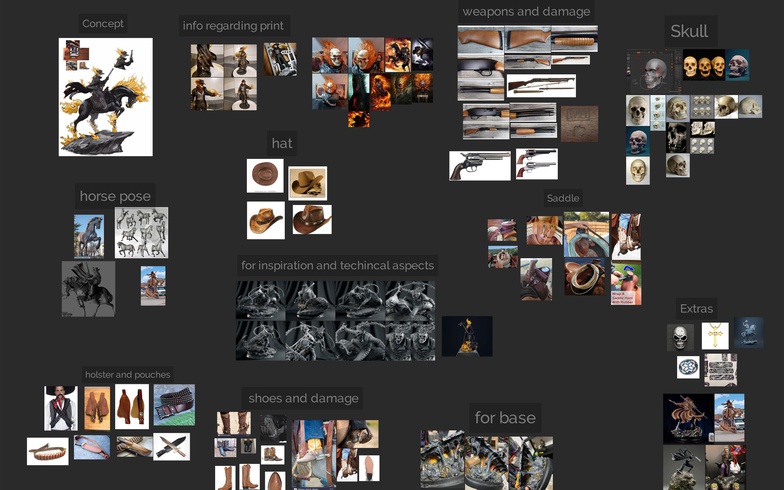 References regarding different parts of the character 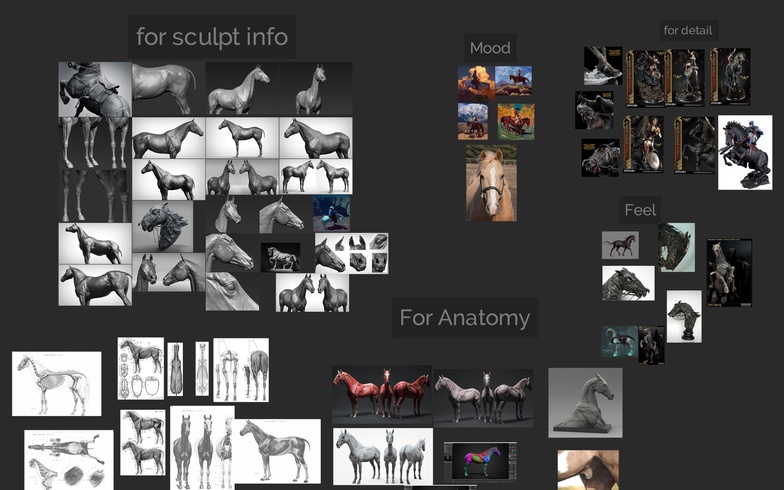 References regarding different parts of the character

By this I mean I just take a short break after collecting references and start observing my image collection and grouping them into which ones I need for structural work in modeling, and which ones I need for details, before actually working on that piece. This keeps me sorted and saves me time while working. Also, I analyze my way through the whole piece and ask which steps saves me time and gives the best output.

So here I start blocking my character in A-pose and adding elements from the concept, but in very rough forms, while continuously checking proportions. I used anatomy references for the horse for front, side, top, and back view, and also perspective views for blocking out without getting into anatomy too much. I worked on volumes and pose while blocking and matching the concept, after I added major elements of the character. The main thing is to not get off-road and not to lose the main feel of character, and in my case remember the client requirements.

Always divide your character or whole piece into 2-3 small units like I did. First is ghost rider, second is horse, third is saddle and flames, fourth is rock base and other small elements. This helps your time management, and helps retain your interest while working... works for me, also it helps release the pressure and you can see the progress on your own.

After blocking the major forms and posing and adding major elements, I would start working on smaller elements like giving attention points to the character, and adding cloth folds to get a rough idea of character direction. Since the whole piece is in motion that feel is very important while refining. I gradually started adding flames and since there are two organic characters I must have to show a bond the character has with his horse, and they share same timeline from the story. My main motive here is to achieve that vibe this character has; that cowboy western vibe with a comic feel.

The basic thing to remember while detailing for collectibles is not to add too much detail – finding a balance. Details should be according to the story of the character, and the requirement of the character, like in my case it has damage on the coat, leather cotton, and metal textures. Battle damage gives an old and used feel. Also, keep in mind the client’s requirements and his feedback. Details proportion is very important that it shouldn't be too large or too small. In detailing, I pick pieces one by one and start adding details, keeping in mind the images I collected. I unwrapped the pieces and added details in layer mode so that it would be easy for me to tweak details when needed.

The horse itself is a character, and a challenging one, but that's the reason why I picked this project to push myself forward. I studied horse anatomy and at the same time edited and tweaked many times to get the result that myself and my client wanted. It should not be that realistic but muscles and proportions should be exact and should be more exaggerated in forms, with some battle damage, and more towards a comic style since he is filled with hell fire with ghost rider.

Since this is a client project and I had freedom to take decisions and add my own ideas to the concept, I added some like the locket in his hands which adds more story and focal points while looking at it. While working on the flames it should look like flames, so try to read some pattern in real flames or watch animated flames in movies. Proper connections and joints with multiple elements gives the whole piece a realistic approach. Don’t just settle for good, try to do your best.

The general idea is to present the character in all its glory – he has and the story revolves around him. To show the character is powerful and heroic, I went for an upward camera position with basic 3-point-light setup. As you can see in the image, the key light is a main source, the rim light is for separating the character from the background and adding nice contours around the edges of character. The fill light is to remove excess dark areas and light up the whole piece. I used Arnold for rendering and did composition in Photoshop like adding those smoke and flare sparkle effects, and playing with brightness and contrast image correction, adding some color gradient in the background. Hope this tutorial helps you in your work process.