Sculpt and paint a fantasy environment with 3D tools and photobash

One of my favorite games of all time is Shadow of the Colossus, and for a while, I wanted to make a decent tribute to it, and here I finally made it. It's a fantasy environment with some mech details. I tried to use some new tools, 3D-Coat for example, also I wanted to make this piece on top of my skills, so I took all the time I needed.

In this tutorial I will show you my basic pipeline, this is how I make 90% of my work. I start from idea generation and thumbnails, reference gathering, sketching, creating a detailed 3D base, texturing, lighting, rendering, and compose it all in Photoshop. I really enjoyed making this piece and I hope you will enjoy this tutorial!

So, first of all, I knew that there should be a caravan in the image and some ancient giant. I thought about that for a few days, made a few super rough scribbles on paper, and when I got some good variation in my mind I made a few thumbnails, to fix my ideas and thoughts. I decided, those giants themselves should form a canyon through which the caravan will pass. And I decided that the caravan will look like a bunch of huge tents, placed on a mechanical spider-looking base.

Also, while I was making these thumbnails, I thought about adding small altars near the giants. It's like this whole place is sacred for people, and when they pass by, some of the travelers make a tribute to ancient ones at the altars. 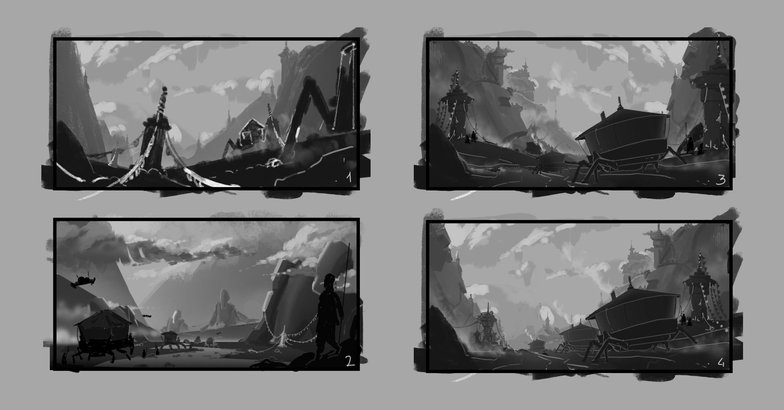 Simple toned thumbnails, to put together all my thoughts

Now, when I have a good presentation of my future image, I'll go hunt some cool reference! For this image, I looked for some mechanical-spider designs, Nepal landscapes and temples, a few screens from Shadow of the Colossus, and from the end of God of War (2018). I also love to put a couple of CG and traditional artists work in refs, something with similar mood or themes. I learn what decisions were made by the pros, and then try to use this knowledge in my piece.

Then, with reference, it's time to make good sketches for the mech and giants. So I tried to make a simple, but believable, mechanism for the spider legs. I looked at real spiders and "replaced" their parts with some mechanics. On top of all that is based a big tent, and around the tent hangs some extra baggage. The giants were based on human proportions, but they are covered with dark fur and stony armor. There are some simple runes on that armor, and some elements of these stones are used as altars. 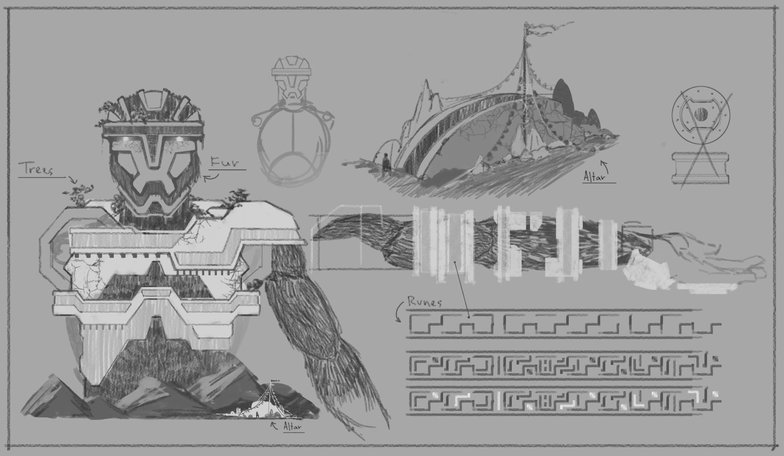 My giant's sketch. Here I figure how his face is going to look, constructions for torso, arms, altars, and simple ornaments

Creation of mech-spider 3D base

I took my sketch and made some simple meshes in Blender. I know there are tons of awesome add-ons, but most of them are just making some actions quicker, right now I'm using only one – maxviz tools. So the basic spider-leg mesh is made from simple cylinders and cubes, with a few extrude and a few booleans. Then I export that mesh in 3D-Coat, and quickly add damages – dents and scratches. Back in Blender, I added some fabrics on the legs. I put a cylindrical high-poly mesh around the leg, without a top or bottom. Added subdiv and shrinkwrap modifier to this mesh, so it would stick to the leg – try to play with that trick, you can get cool results. I duplicated the leg and moved some parts as if the spider is walking. Legs connected in boxy-base, on top of that as a cylindrical tent. In the end, I added ropes (curves with Extrude), and boxes with spheres around the tent. 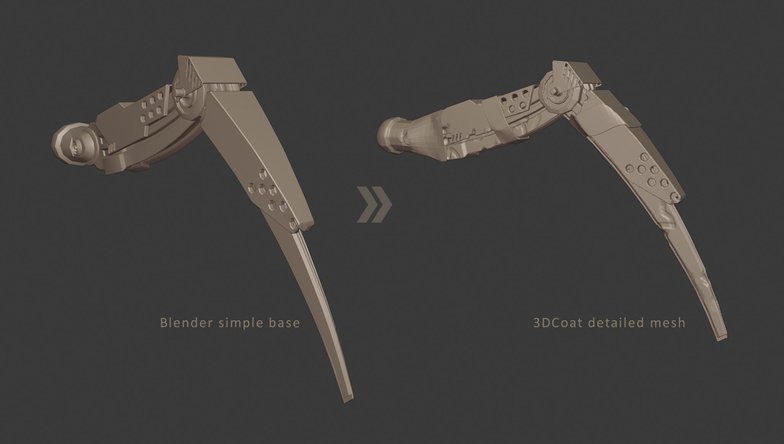 Here you can see the simple mesh I made in Blender, and how I detailed it in 3D-Coat

Creation of the giant’s 3D base

For a giant, I took a human mesh, detached the arms and head from the torso, and on top of it, I built that blocky armor based on my sketch. Then I exported all those parts to 3D-Coat. Here I added fur-like stripes on the body with the 2D paint tool. I added tons of cracks on the armor – I drew big ones and added a lot more with stencils. Also, I took ornaments from my sketches, imported them as stencils, and added them in the geometry. Then I took the cylindrical armor part from the arm and detailed it more because I would use it later as an altar. And again, exported it all back in Blender. 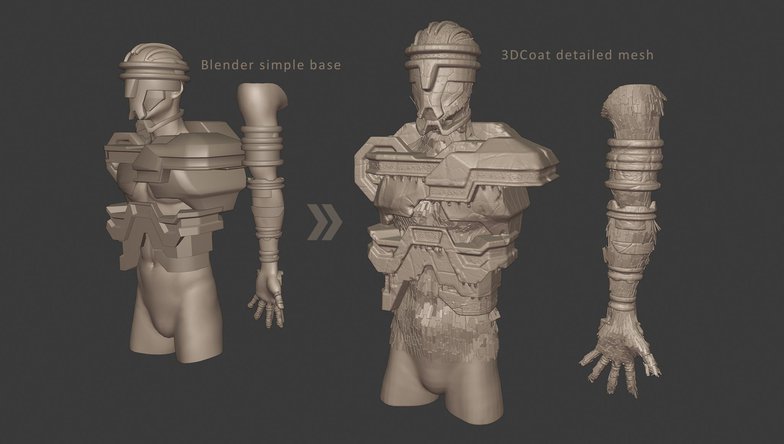 So, it's time to assemble it all together! Based on my thumbnails I started to place my objects in the scene. Closer objects are really high-poly after 3D-Coat, but I decimated with modifiers those that are far from the camera. No need to make the scene extra heavy and slow down your work. I started from the giants, placed them like canyon walls, and quickly added sculpted hills, to make it look that they had integrated with nature through time. Then I added spiders, approximately like on the sketch, but then I moved them a little bit for better overlaps with the giants. After that, I put altars near the giants. I also added a few human models in the scene for a sense of scale, but I didn't render them on the final image.

Now I start texturing. So, first of all, I need to tell, that sometimes it’s better to texture one object, and then duplicate\instance it, instead of copying the material on a few objects later. Always think a few steps ahead about which process will be more efficient for you.

I set some nice HDR so the materials shaded correctly. I'm making quite simple materials. I prefer to make a few renders to compose nicely later on, rather than spend too much time with a bunch of nodes. I created a couple materials for each object: different stone textures, wood, sand, moss, new metal, rusty metal. And don't forget, that Blender deletes unassigned materials, so if you create extra material for additional renders, assign it for a simple box outside a camera view.

When the materials were created and properly assigned, I started to rotate my lighting around, to find the best angle (I do some temporary light even before texturing, but at this step, I change it almost completely). Usually, I just have a base idea about my light – day, sunset, night, foggy, and so on. So I created the sun in Blender, set the power I needed, an orangey color (since I imagined that piece in a sunset). And started turning the sun around. I stopped when I liked the result, but it was not finished yet! Now I created a few planes, and partially close sunlight. The idea here was that the dark silhouette overlapped with the lightened elements, and so objects would be readable. Also, you can add some extra guidelines with shadows.

Main materials in place and proper lighting is set up

Okay, materials were done, and lighting satisfactory. Time to render! Everything I do right now, I do with Eevee render, it has some cons, but the simplicity and speed is more important for me. I made about 2 to 3 renders with different materials, AO pass, zDepth, sometimes I put the black matte material on the whole scene and make a fake direct-light pass, so later I can tune it with levels in Photoshop and get useful selections. Eevee doesn't have an ID map option, so I quickly put Emission shaders on objects I need (don't forget to turn off bloom in render options), all in different colors of course, and render it as a simple image.

Here you can see my fake objID pass with emission

With renders ready I sent them all to Photoshop, finally. I put one render as a base, and on top I added my additional renders with extra materials and put a black mask on them. I took a brush with cool edges and carefully showed those different materials. For example, I drew metal damage this way, painted dark stones around cracks, and moss on convex surfaces. When I was done with those additional materials, I put an AO pass on top, with a Multiply, and Opacity set to about 30-40%. Zdepth went in the alpha channel, by Ctrl+clicking on a channel thumbnail to select it properly, and with active selection I added a Solid Color layer on top of the renders in Lighten layer style. In Solid Color I chose any color that would suit my work better – in my case, it was light orange. After that, you should see cool aerial perspective in your work.

And now I finally could start photobashing carefully. When you choose photo-ref for your piece, try to choose ref with similar lighting and camera angle. First I like to find a good sky with cool clouds and put it in the background. After I added those huge rocky gates on the horizon. The next step was all kinds of greenery – trees behind the giants, some dry-looking grass on their armor, small pieces on the ground, dark silhouettes in the foreground (love this part!) You should carefully add interesting shapes that slightly covers your painting, and it really helps to immerse in your work, like we are really standing there and looking through the grass, really easy, but very efficient).

Then I added some extra air and dust to show some space between those giants. I drew a lot of little things on my spiders – ropes, flags, some extra mechanization. Those are tiny changes but they are making it all more interesting and believable. And after, I added a bunch of monks walking near the mechs.

A lot of work done

Here I rest from my image for a while and come back the next day with a fresh look. First of all, I composed my monks in the picture, darkened the color, added atmosphere and little details. Then I worked on the rocks in the background – they were too simple, I tried to make those shapes and magical lighting more interesting. I added more small flags near the altars. Then I reduced details on the giants with the Mixer brush, and carefully overpainted the spider, blurred some edges to add some movement effect, and some sand falling from the legs.

In the end, I tried a few ColorLookups. Usually, I leave the best one around 40% Opacity. Check the tone and contrast with auto tone\contrast tools (sometimes they're making really weird and bad results, but mostly they make the work a little better). I blurred the dark grass in the foreground. Added sharpen, but with a mask – I hid it on most of the image and left it only on the point of interest. And here it is - The Valley of the Giants is done.

In this image, I really tried to push the composition forward. So when you see the picture, first of all, you are looking at the right spider – it's very detailed and contrasted, plus there are several guidelines that lead to it (silhouettes and shadows, even spider legs). Then we have a giant hand that leads us to the next spider. Plus, these tents itself work as a rhythm – as a repeated shape – so your eye will go from one to another and in the end, come to the magic light in the background.