Surface artist Yan Blanco takes us through the workflow for creating the smoking caterpillar from “Alice in Wonderland” using ZBrush, Blender, Substance Painter, and Photoshop…

This project was based on a character from Alice in Wonderland. I created the idea from scratch with some sketches, and used Blender, ZBrush, Substance Painter, and Photoshop. In this making of I want to show how I worked with different softwares in the same workflow, and some tips that I learned in the process.

I do not create sketches every time I start a 3D project, but in this case I tried to draw something close to the image thatIi had in my mind. This helped me to see better how the image inside my head would work in real life. When I started the 3D scene I put away the Citar idea because it seemed too much in the scene. I sketched some mushrooms and props for the scene as well. 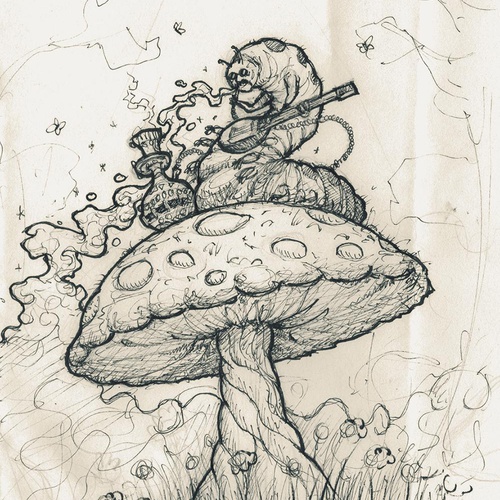 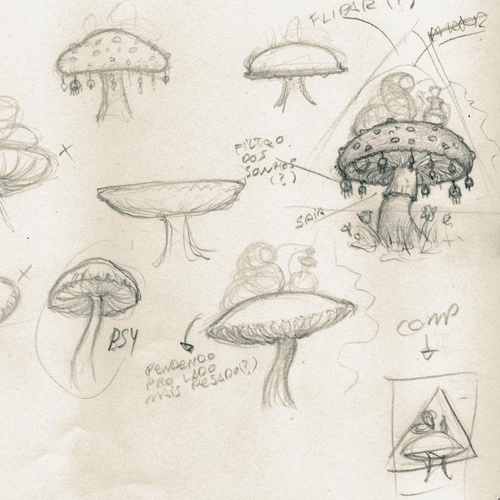 Usually I save a lot of references before starting a project, but it is very common to search new ones after I start working. On this project I searched for mushrooms, caterpillars, hookahs, and caterpillar artworks from other artists to get inpired in the design process. The references help me in the sculpt and shading work, so were very important to spend some time looking at them and making notes of how I would use that visual information in my work. 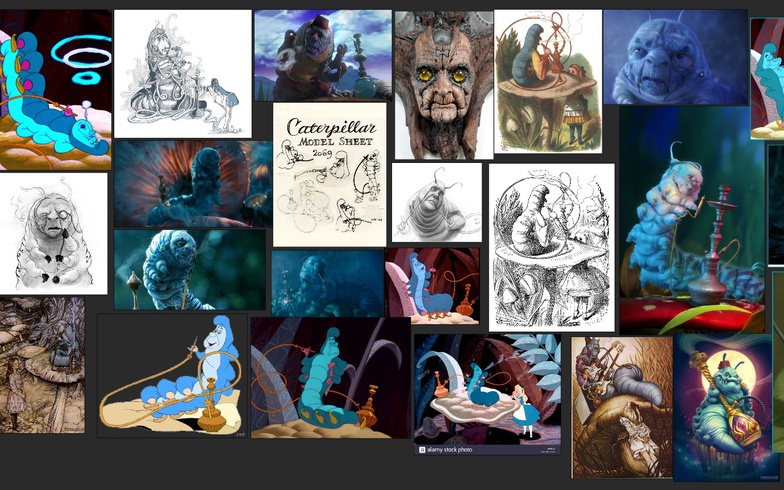 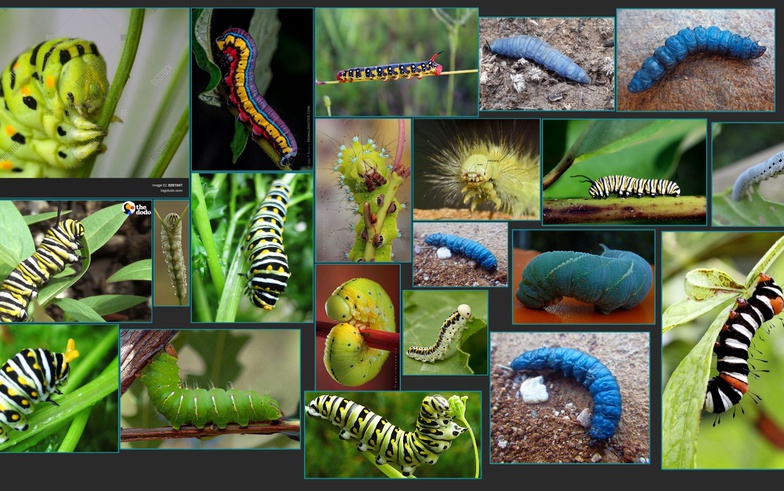 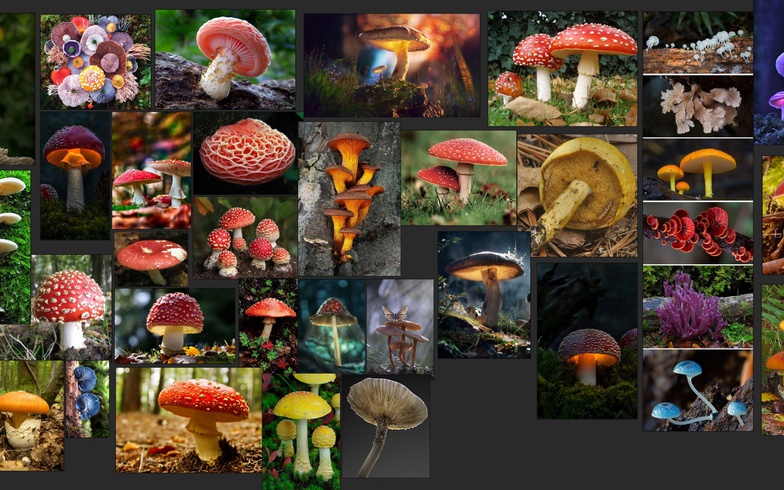 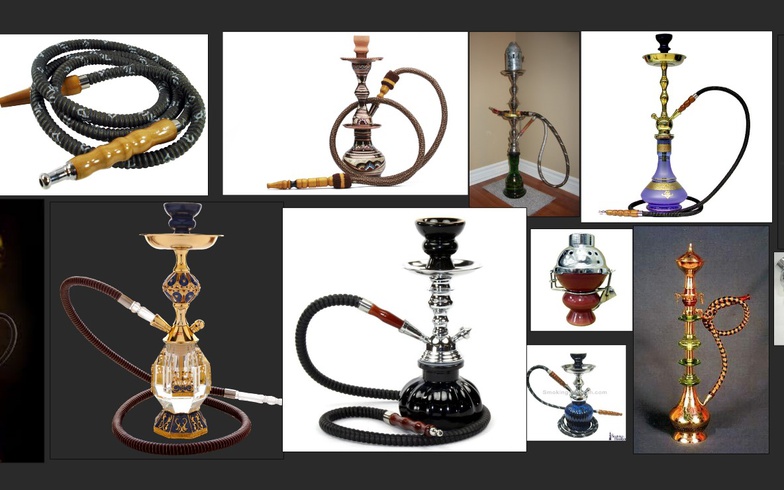 This is very similar to the sketch step, but the difference is that in the 2D sketch sometimes I do not have enough skill to understand the tridimensional space of each asset in my scene. How the perspective will work in the 3D scene? What lens is better for the shot? How close I can put objects together without overlapping? These questions can be answered in this step. OBS: The hookah was done in the past for this project, so in this case I had the final model already, but usually this step doe not involve creating high detailed assets.

After seeing if everything is working well in the blocking scene, and having confirmed what assets will be done and what will be discarded, let's model. For this step I like to use ZBrush for the organic sculpt, and Blender for the poly-modeling.To detail the face I used only the basic brushes, like Dam Standard for the wrinkles, Standard / Inflate to enhance volumes. I also used ZBrush Layers to apply asymmetry. For the Hookah sculpt, I used the amazing radial symmetry, so this allowed me to detail every angle of the surface very quickly. 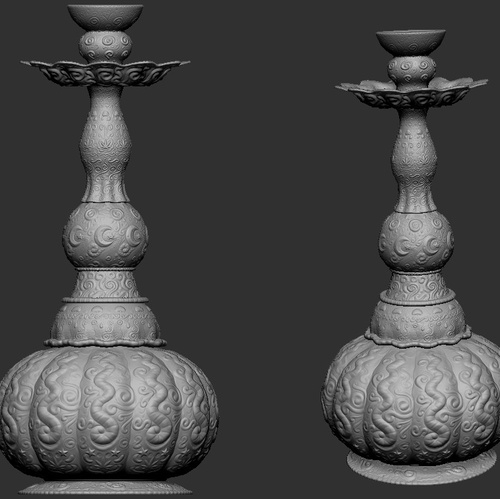 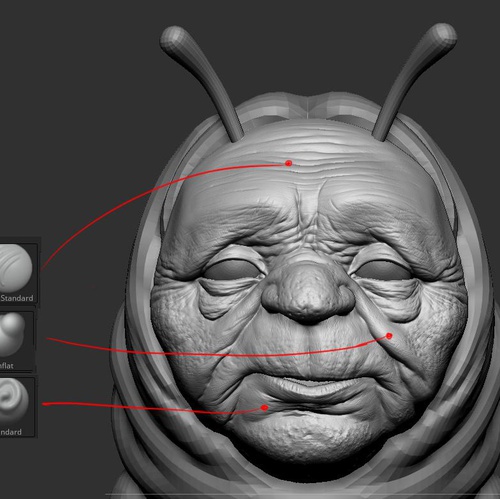 I usually don't like to create manual retopology, but unwrapping a weird topology can be very annoying, so its important to spend more time here and avoid problems in the future. I created the head's topology in Blender, and the others assets were done using Zremesher. I like to use Zremesher Guides and Polygroups to control better how the geometry will be done.

The Unwrap was made in Blender. I separated each part of the character in a different UV Shell, so I was able to export high res maps for each part (4k maps only for the face, for example). For the shoes,Ii used the same UV for all of them, so I could texturize only one shoe and apply the same textures for all.

I used Substance Painter to create the textures, and I baked the maps using a Normal Map from ZBrush, so the curvature and ambient occlusion get finer details. I used the skin pores from Painter to add more surface variation in the face, and anchor masks helped to apply variation in the edges of the black/white designs.

Pro Tip: Since all the shoes were sharing the same UVs, I placed one principal shoe in the middle of the Painter scene, so I was able to use symmetry paint to create the designs on both sides of the mesh. 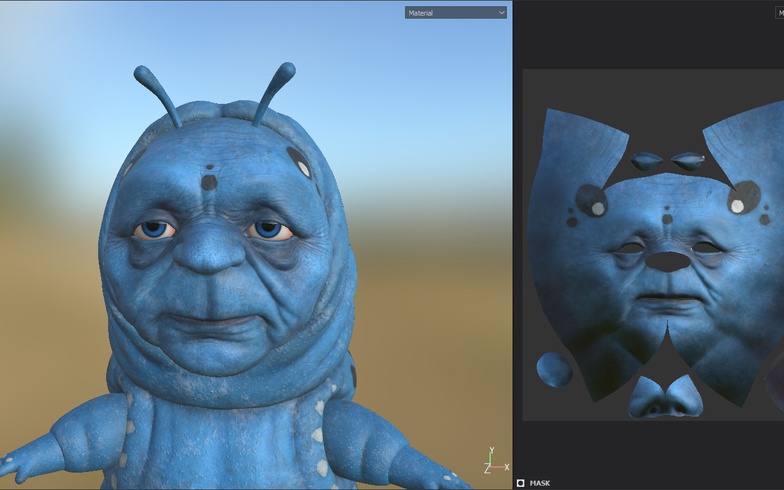 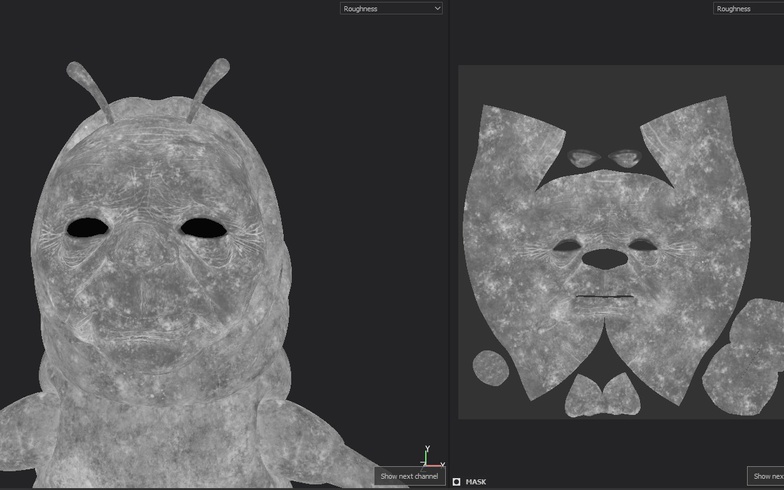 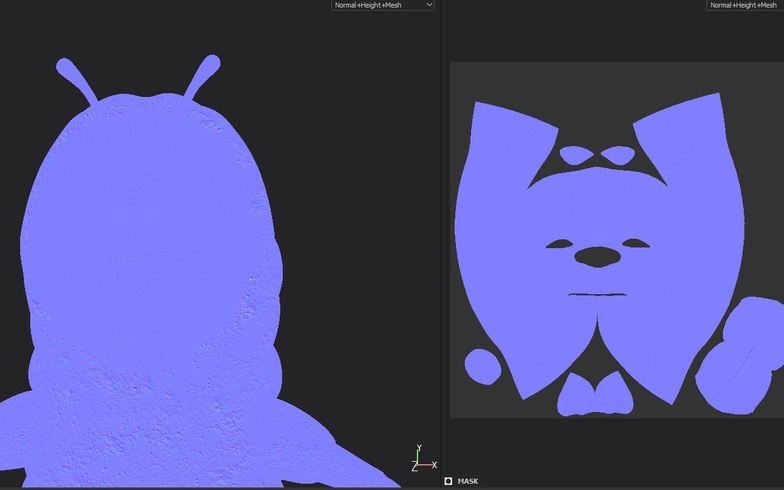 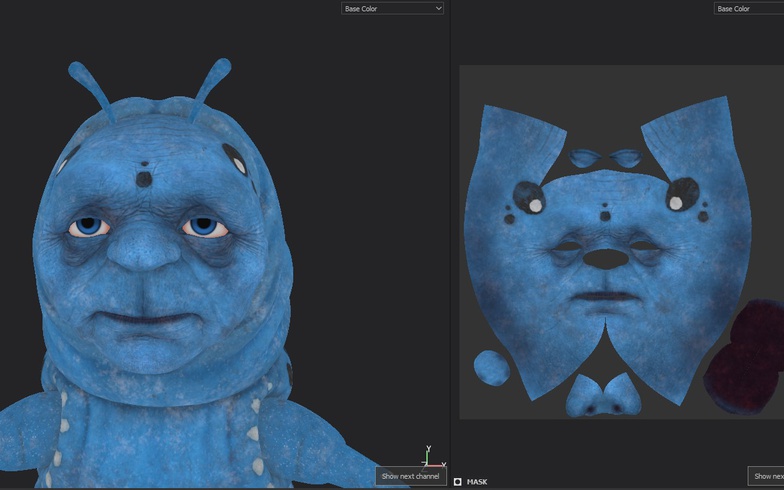 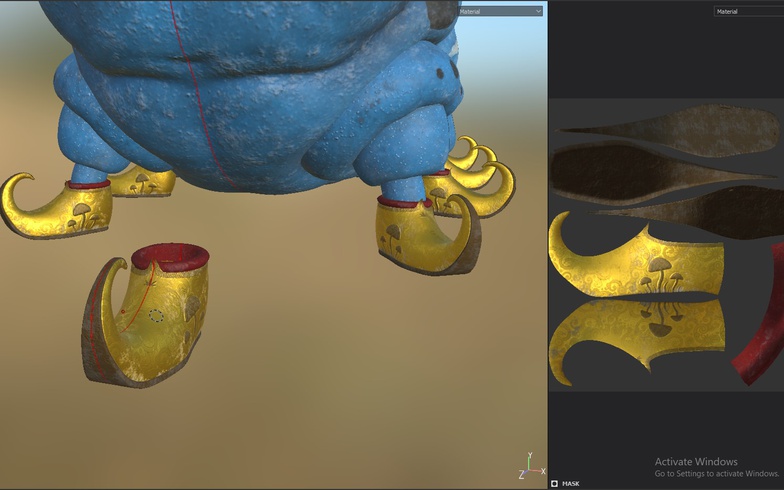 After exporting the textures from Painter, it was time to refine them in Cycles Render. I tested some SSS color radius for the caterpillar to see wich looked better. In this case i didn't have to use the red SSS to simulate blood under the skin, because I think that caterpillar didn't have red blood, so I tried different colors to see which one give me a better result. For the mushroom shader, I applied a layer of dust with the fresnel node. I always try to add dust or grunge in my materials to make them more old and natural. Pro Tip: I always use the Random Walk option for SSS in Cycles, it looks very nice for organic shading. 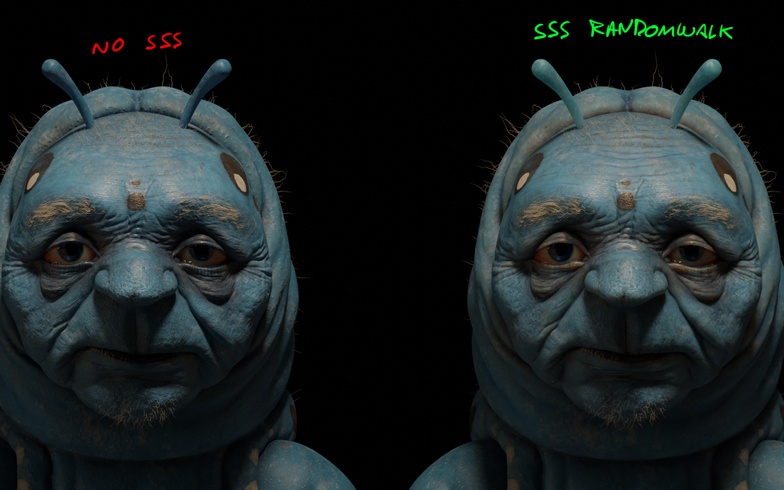 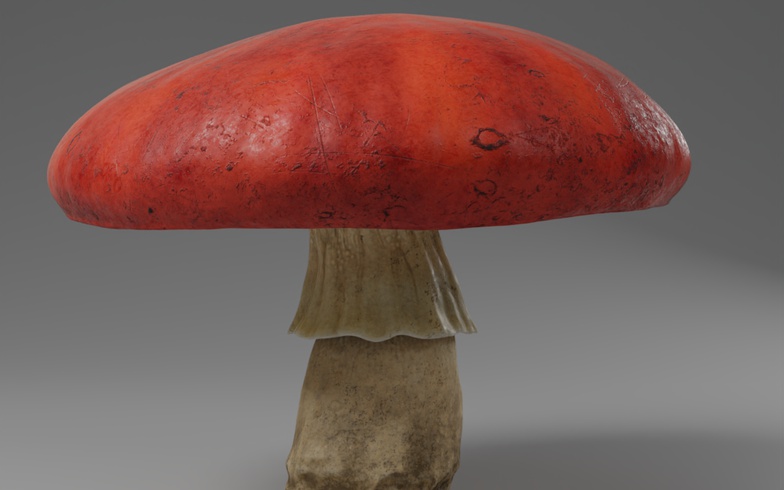 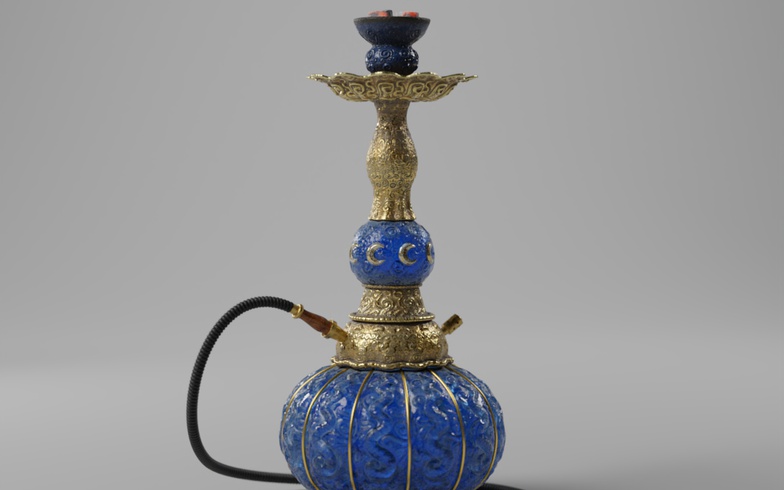 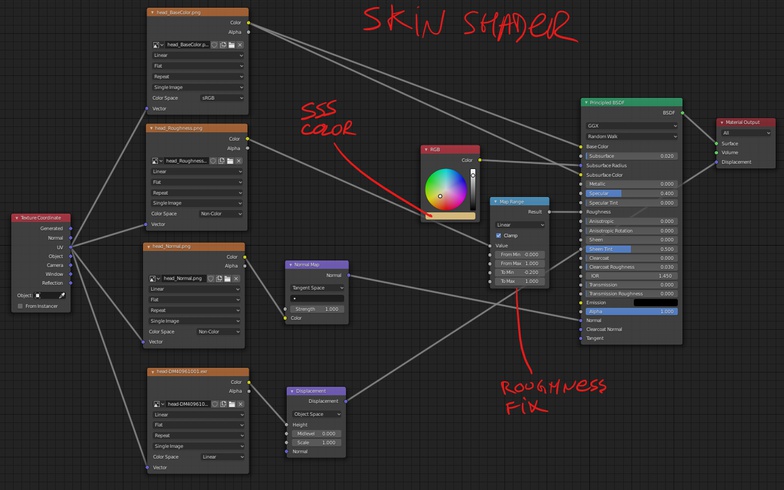 Blender's particles were used for the grooming. I created eyebrows, a bit of beard, hair on the top of the head, some hair on the tip of the nose, and hair on the body's back. This created a more natural look for the caterpillar, since a lot of references showed some kind of fur on their surface. For a cool variation in the hair, I played with different values in the roughness slider for each particle system. Since the caterpillar was made with similar real world size, the values for grooming variation needed to be very slow. Pro Tip: You can use the Random slider on the Timing panel to randomize hair size, this usually works a bit more natural than the Length/Thereshold sliders on the Children panel. 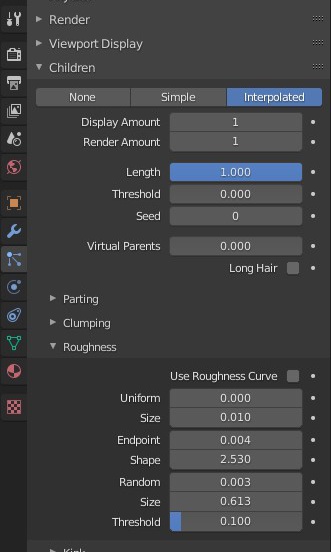 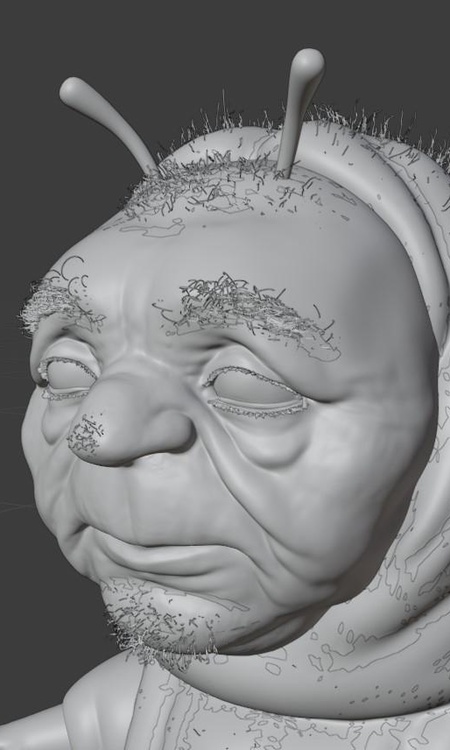 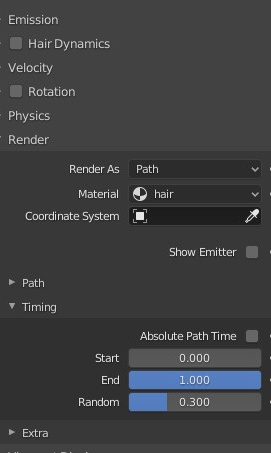 To pose the character I usually like to make a basic Rig in Blender, and link it to the body with 'Set Parent To' > 'With Automatic Weights'. Sometimes I use ZBrush Transpose Master to pose, and I transfer the pose with Shape Keys in Blender, but in this case when I was not sure which pose would work best in the final shot, I opted to create a Rig, so I could have more control of the pose at any time of the process.

Here I make a LOT of tests to see which lights work best in the scene. For this scene, I rendered the foreground separated from the background, so with this I could make different lights for each render. I used area lights, and a white plane to bounce light to the dark side of the caterpillar. A small area light was added to the left side of the image to enhance some details of the face, and a HDRI with very slow value was used to add an overall light as well. In a different render layer, I used other lights to reveal the enviroment, and a specific light that I used behind the hookah to bring more details to the glass base. In Photoshop, I mixed the renders and controlled better the exposure of each layer. 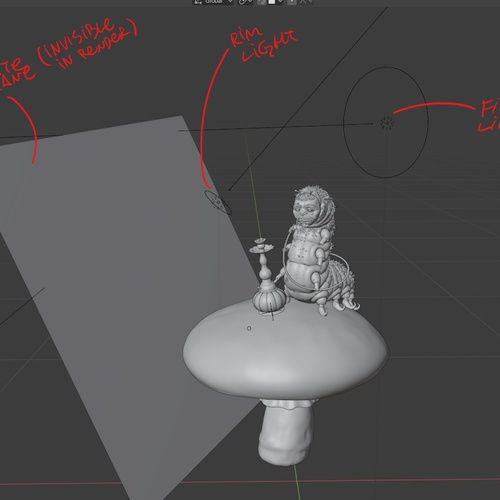 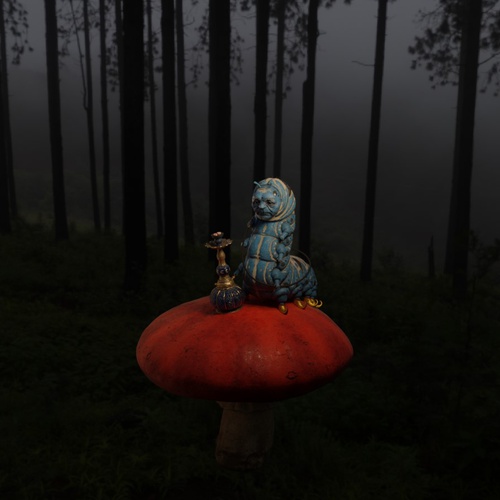 After the render's done, I realized that the scene was too dark, but since I saved the file in PNG 16-bits, I could light up the scene with a Curves Layer. The smoke was too complex to be done in 3D, so I used a lot of the smoke images that I bought online to create the effect of the hookah smoke. I used some glow brushes to create a kind of magic effect in the smoke as well. And after tweaking some colors and effects, I added an overral Sharpen to the image to enhance a bit more the details. 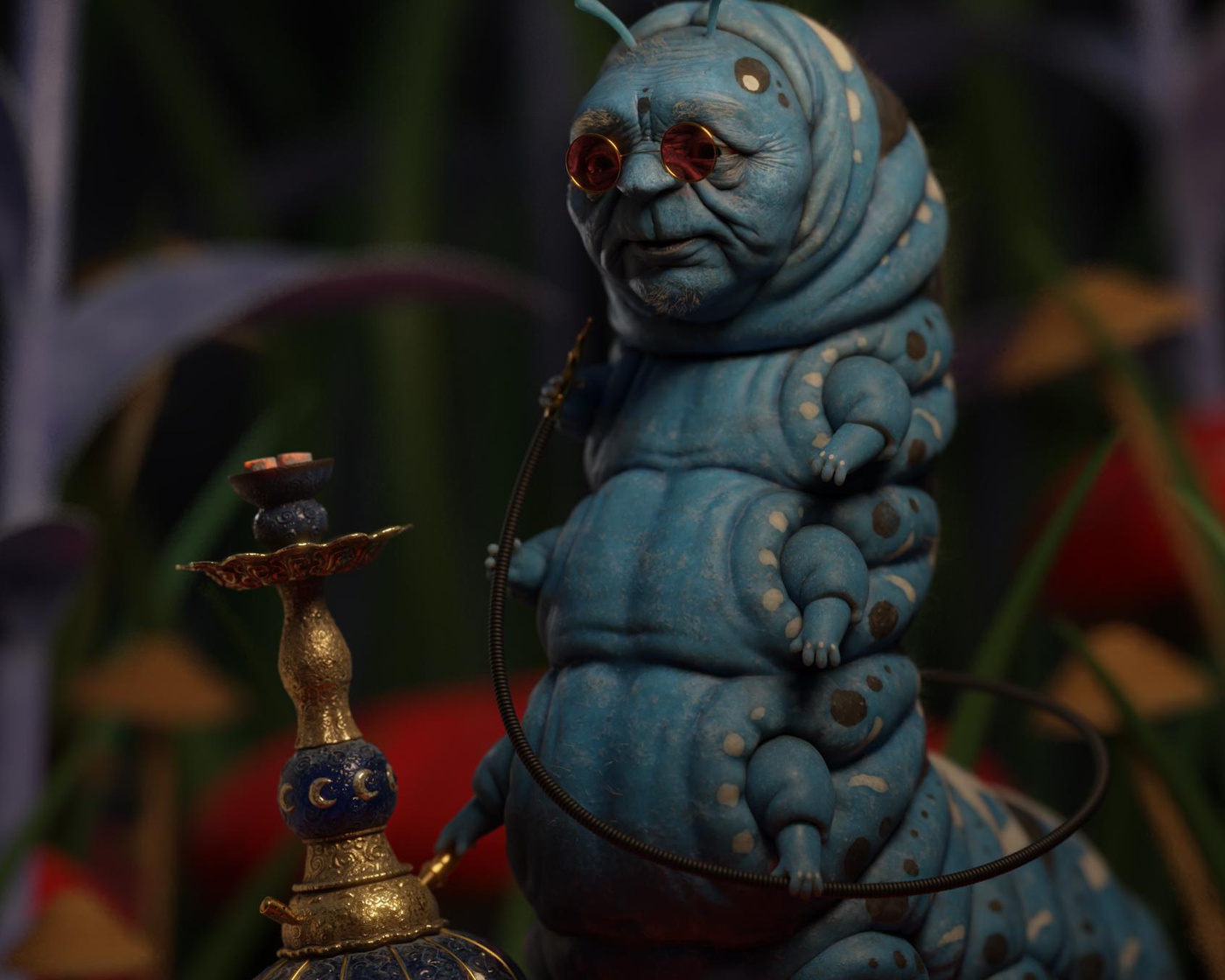 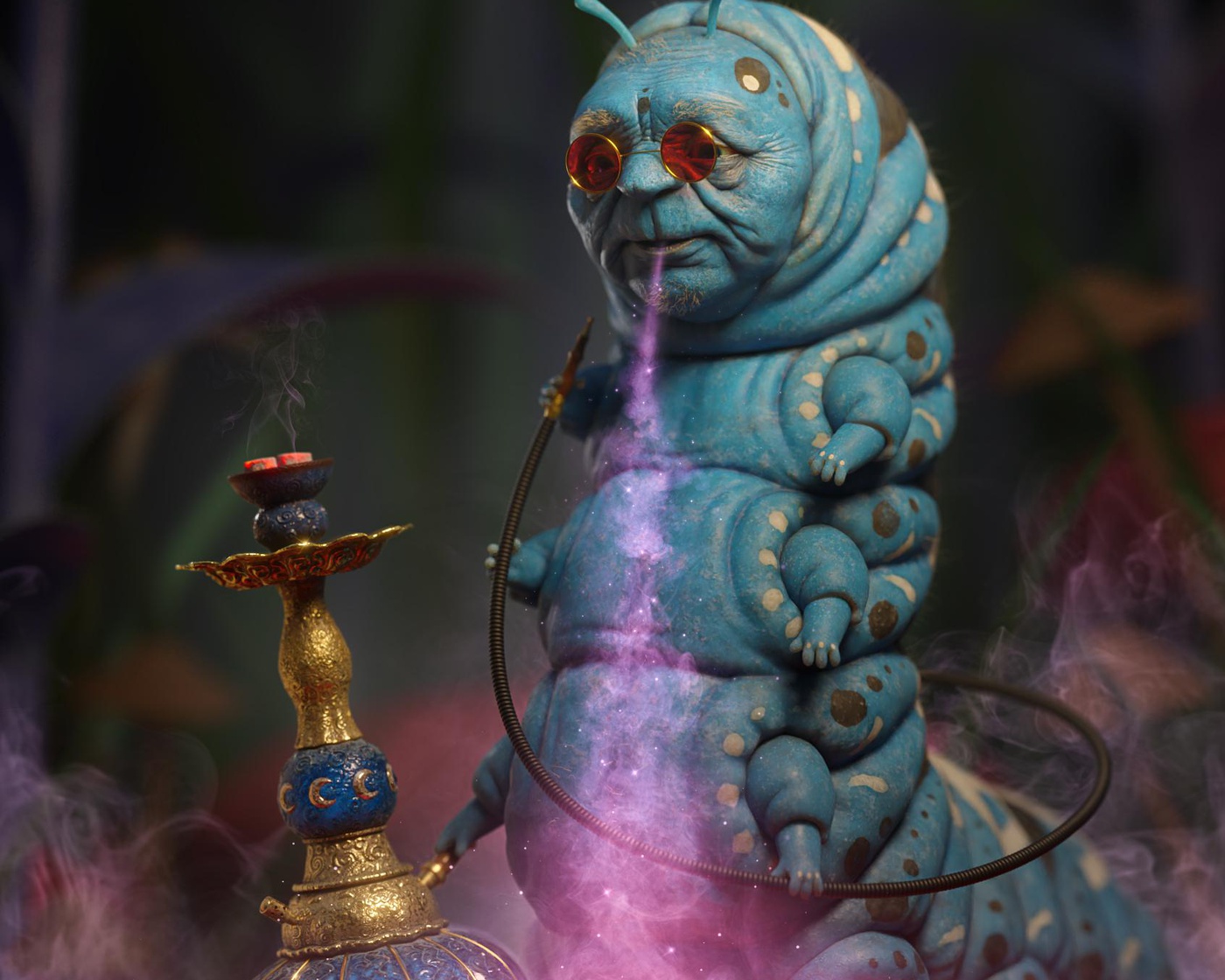 After spending a lot of time sculpting and texturing a character, why use him for only one image? You can make a lot of renders to see how your character would look in different lights and compostions, try to have fun with that so you can have more images to show different details of the character that was maybe too subtle in your principal render.