Rafael Mesquita takes us through the thought processes and ZBrush workflow for his Floki Viking fan art...

Hi! My name is Rafael Mesquita and I'm a freelance character artist currently living in Brazil. In this making of I will show you some of the steps I used to create my "Floki Vikings Fan Art." Hope it can help some of you to create your own project as well!

Before we start, it's important to choose a new project aiming on which skills we want to improve: modeling, topology, texture, and so on. In this project I wanted to get better in the process of modeling clothes and accessories, that's why I chose a concept where the character had many of these elements. Always choose something you enjoy making. For example, if you enjoy making characters, go deep into it! If you are more of an environment person, no problem! You need to be happy with the entire process and your studies, because you will probably be doing them during your spare time. 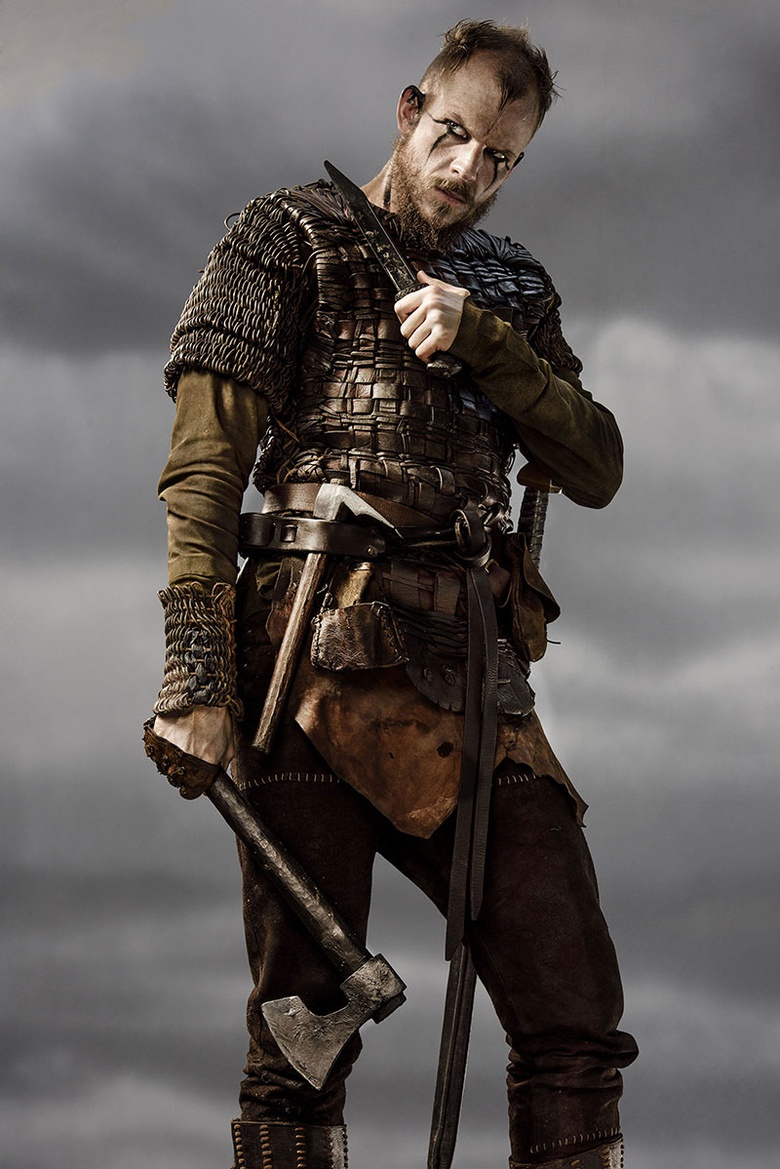 Once you have in mind what the purpose of your project is, it's time to organize your ideas. Usually I like to separate into small topics what is going to be my modeling process of the entire project, in that way it becomes easy to search for references and organize them for each part of the work. After collecting all the references, I like to create a single board with all of them in it so that everything is easily accessible all the time. Do not think that using references is wrong, no artist needs to know everything, using the right references will improve the quality and speed of your work. 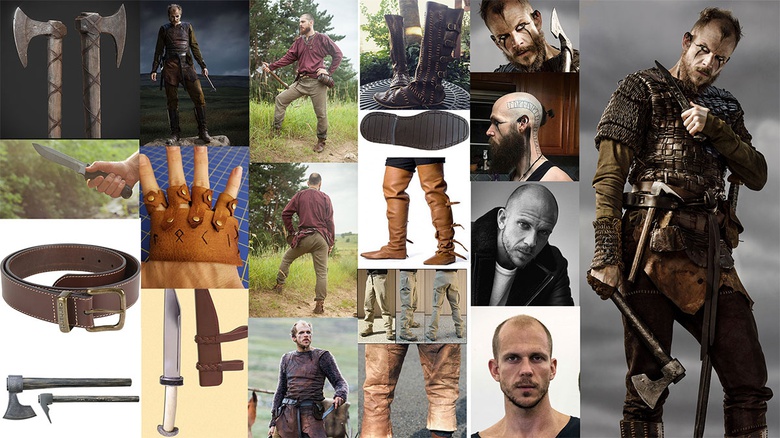 Board of all images I used to start the modeling process

Time to sculpt! At the beginning my focus is always on the proportions and silhouette of the character, keeping as few polygons as possible to facilitate the changes on the mesh. This part is crucial for the final result of the model. Work hard on this step to avoid future problems, because having a highly detailed work won't matter if you have bad primary shapes. This would make all your hard work less interesting. 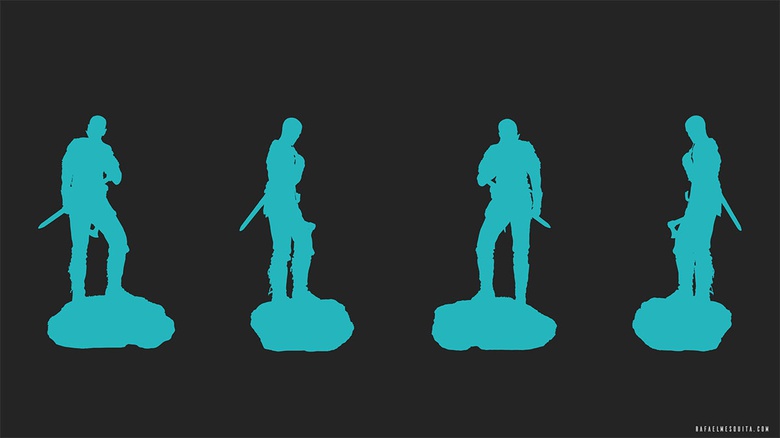 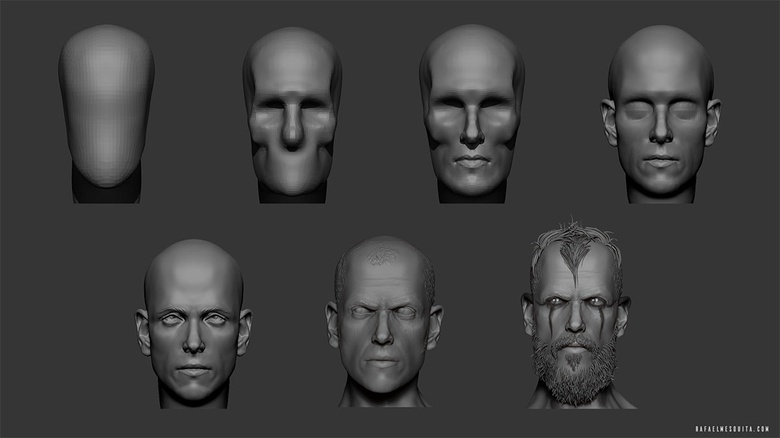 Block out of Floki's head and silhouette

Once you have your model with the primary and secondary elements ready it's time to start sculpting the tertiary and fine details. In this step I tried to add small details where it there might be a zoom or where it would be seen in final image, it all helps to save time. ZBrush's standard brushes are enough to make any kind of details. A good way to make the model more realistic is to create an alpha and apply it in a way that looks natural. In the image you can check some brushes I used and how I modified the alpha. 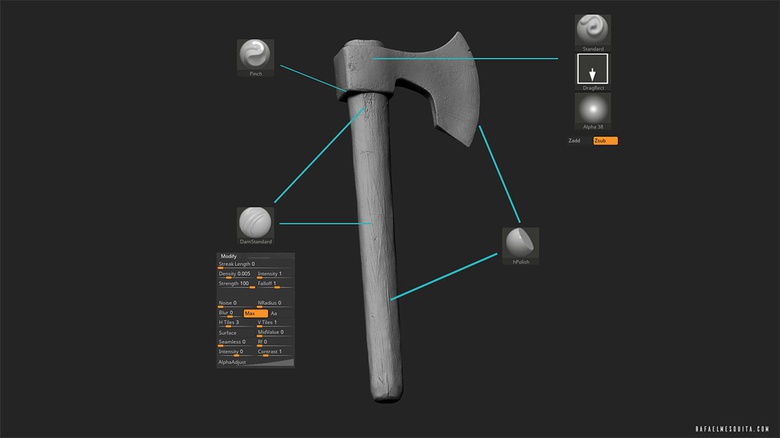 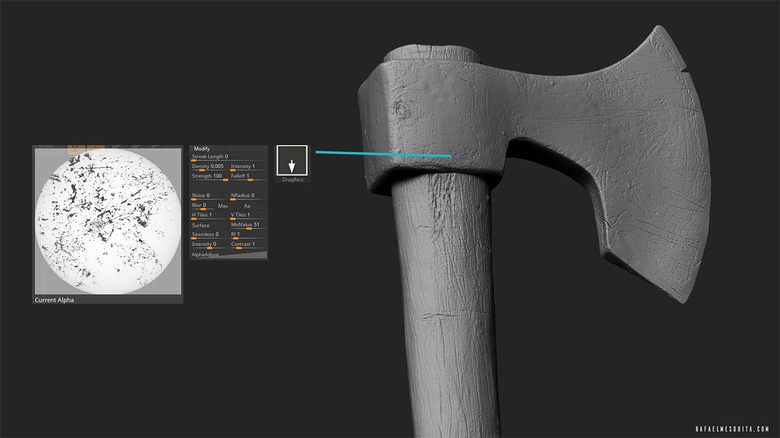 Some standard brushes I used for making the axe details

For the render I only used ZBrush and Photoshop. I created several renders with lights in different places so that I could export them and compose into a single image. It's important to know where you want your key light and fill light to be, you can let the tab light in ZBrush open so you can play with it in different positions to create new ideas. At the beginning it's interesting to study photography and try to imitate some kind of production that can match your model. 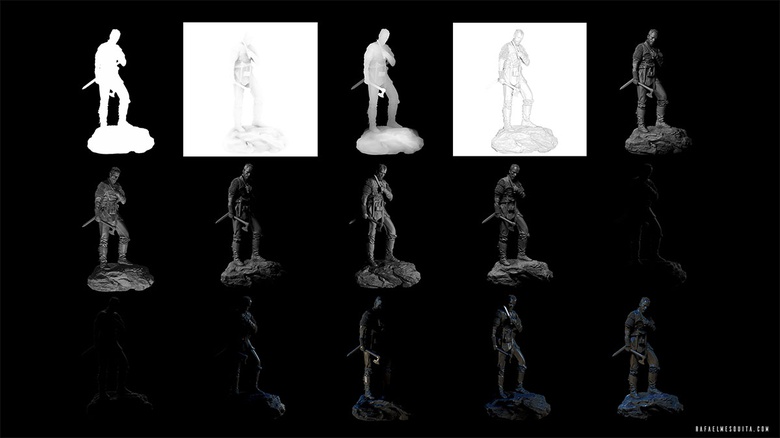 All passes used to compose the final image

After opening all ZBrush passes in Photoshop, it's time to put everything together and compose it into a single image. First I create a darker neutral background and then I patiently change the type of layer and its opacity so that I can create a key, fill, and contour light that highlight the work. Use selection and adjustments masks to always keep in mind how you will work with more lights and less lights. In order to give a more realistic idea, think which objects reflect more and which objects reflect less lights, so that even without color you get the idea of what type of material is in the image. 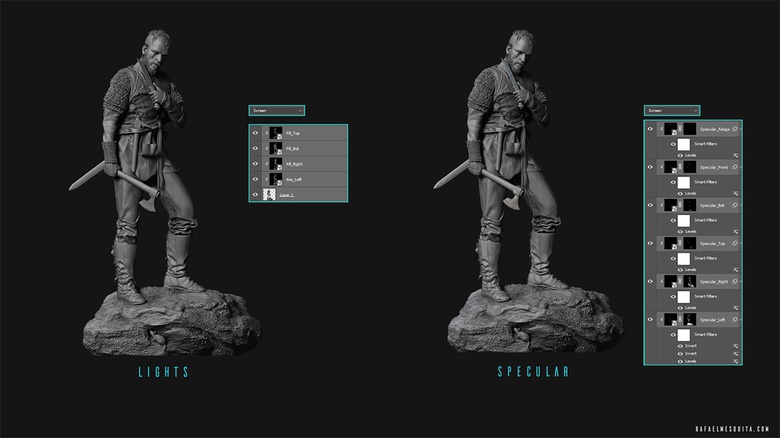 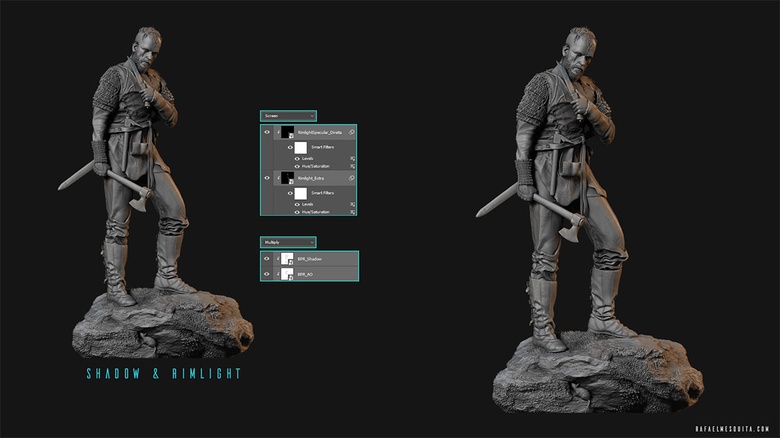 In the end it's nice to work with the background in a way that it can compose an image without drawing more attention than the character. Most of the time the final touches that I try to bring to the image are to gain more contrast, to bring more definition and better values. You can check the image to see some of the process that I use in the image to get some of these results, try not to use too many effects or you may end up losing some of the hard work you had in the modeling process. 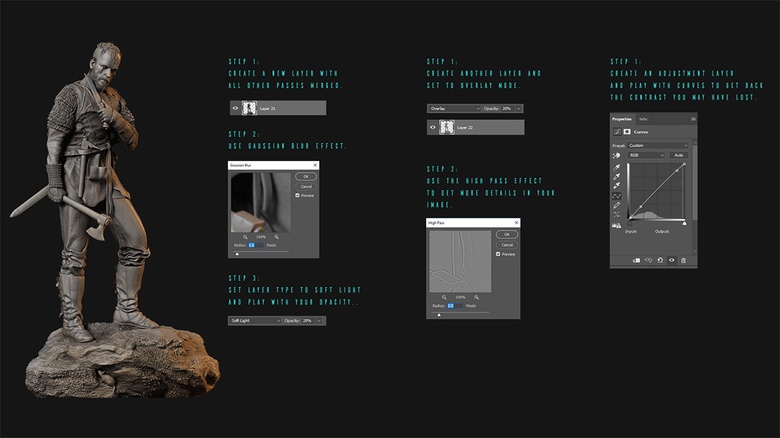 Some small steps to get contrast and values in your image

I always try to create more than one final image so I can show the characters at different angles, bringing more dynamic to the presentation. After it all it's a good idea to establish the pros and cons of making this project so you can improve on the next one! 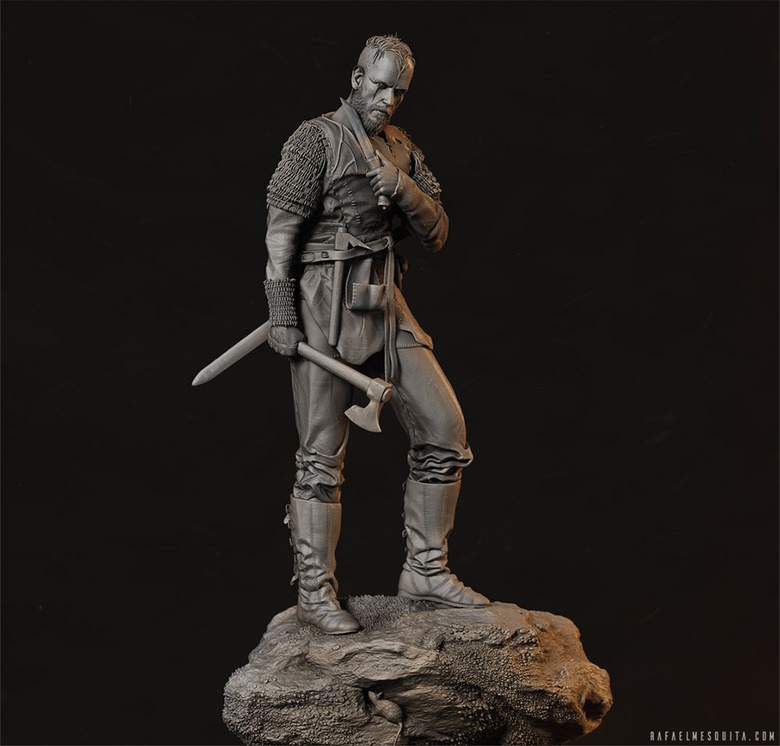