Sculpt a young “Dude” in ZBrush for different lighting setups

In this making of we will quickly go through the entire process of creating this piece. I used ZBrush for the entire modeling, Substance Painter for the texture creation, and finally Maya for all the grooming and rendering. The piece is based on a sketch/design from Cameron Mark, an amazing artist that you
can follow here.

I always start with a really simple blocking to figure out the main volumes and proportions. It is important to me to have all the elements present, even if it’s just a placeholder sphere.

Then I continue adding detail and polishing until I get closer to the result that I want. At this point the hair was going to be geometry, but later on I decided to do it with Xgen. As we will see in the next step, it was pretty useful to have the actual geometry to create the guides. 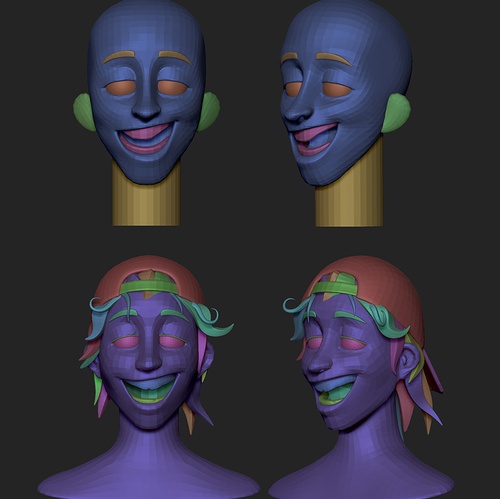 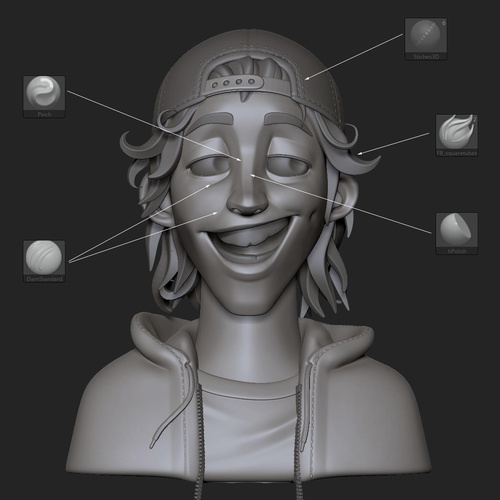 Some brushes I used in the model

Once in Maya I wanted to use the hair from ZBrush to generate the main guides for Xgen. To achieve that, first I had to remove all the caps on the hair tubes to be able to use the Tube Based Grooming tool. After that it was easy to get those guides and generate the main hair of the character.

Now that I had the hair created, it was looking to perfect and clean for what I wanted. This was the moment to use the modifiers that are available in Xgen to generate clumps and noise in the hair. I used some clumps modifiers, a cut one (to have different length on the hair) and finally a noise modifier to add extra chaos.

Next thing to add was the eyebrows of the character, for that purpose I used scalp geometry to generate hair from there, instead of painting a mask on the character. In this case the guides were placed and groomed manually. Also a little bit of noise was added with a modifier to add a more natural look to them. 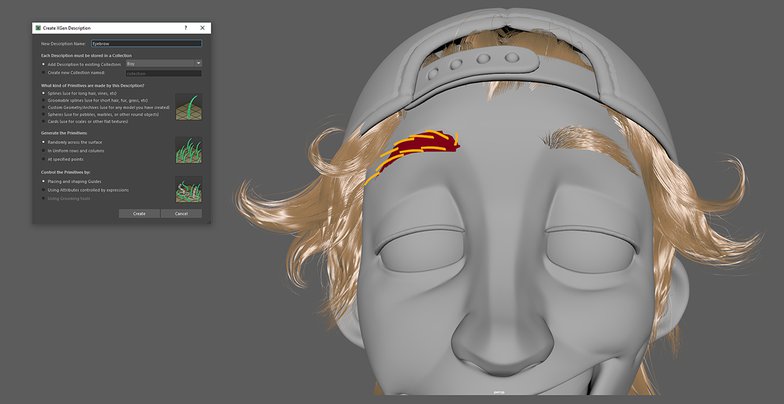 I wanted to add some extra detail in some parts of the model, like the baseball cap and the inside part of the hoodie. For that I created another couple of descriptions in Xgen, but now instead of generating the guides manually or with tubes, it was done with Groomable Splines. Playing with the fur density and modifiers like Coil and Noise, it was easy to add that extra layer of detail. 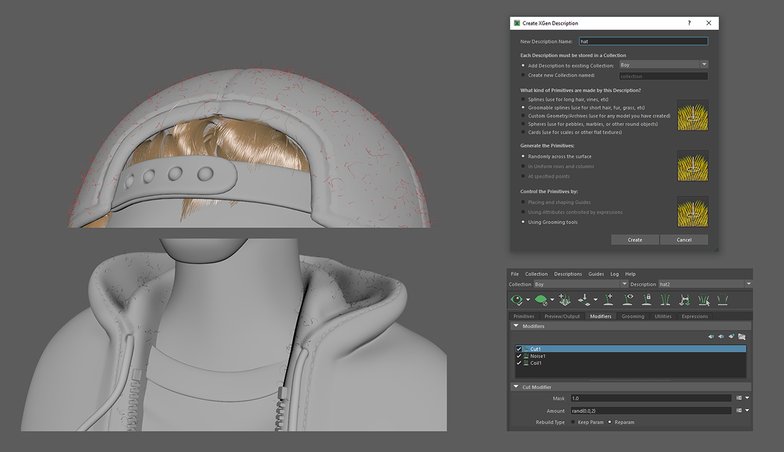 All the grooming is done!

After following all those steps I was happy with how the hair looked. At this point it was still using the default Xgen shader, but later on I changed it to the aiStandardHair from Arnold. It was time to move to the next step and prepare the model to be textured. 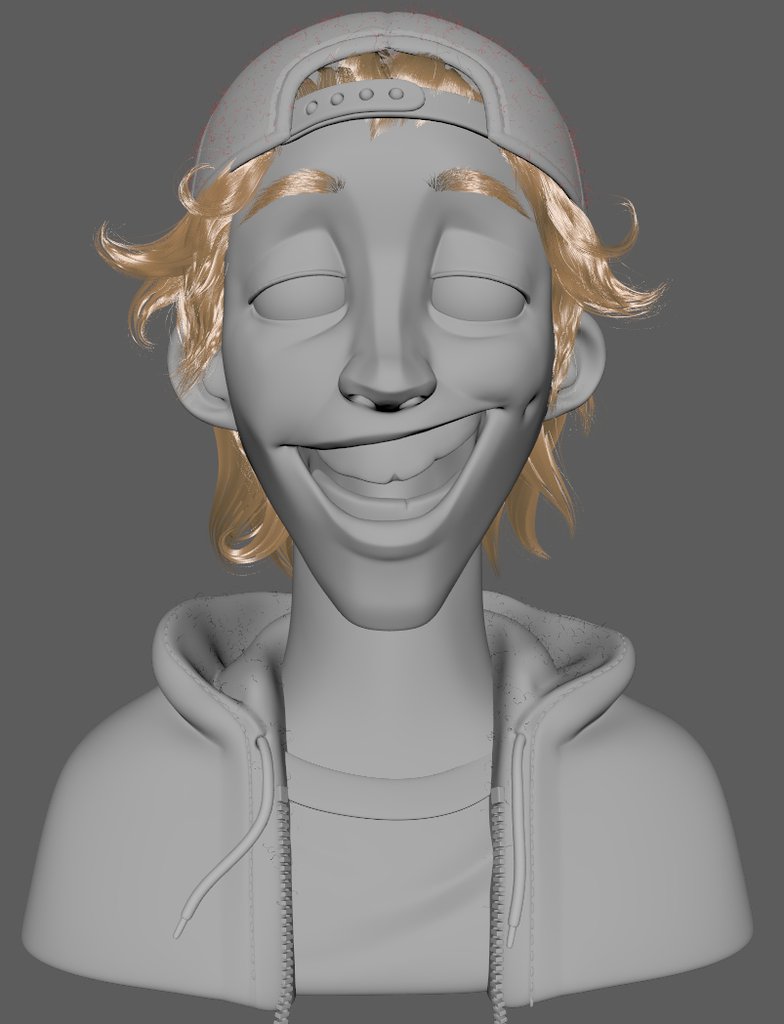 For the unwrap process, I used the “3D Cut and Sew UV tool” from Maya; it was the first time using it and it was a nice surprise. I was able to unwrap all the elements from the character in less time than I expected. 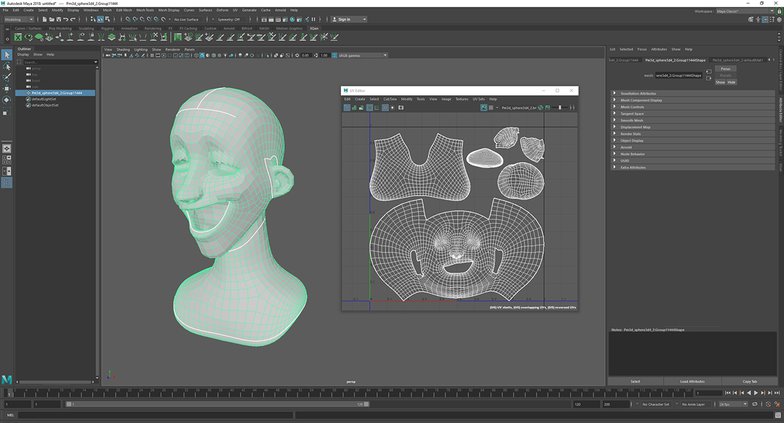 Once I had all the objects mapped it was time to start with the texture, for that purpose I changed to Substance Painter. I texture every object individually, generating the diffuse, metalness, roughness, and displacement maps that later on I was going to use in Arnold. I didn’t want a lot of detail on the textures, I was looking mainly to have plain colors, and get an extra layer of detail coming from the height map or the roughness map. 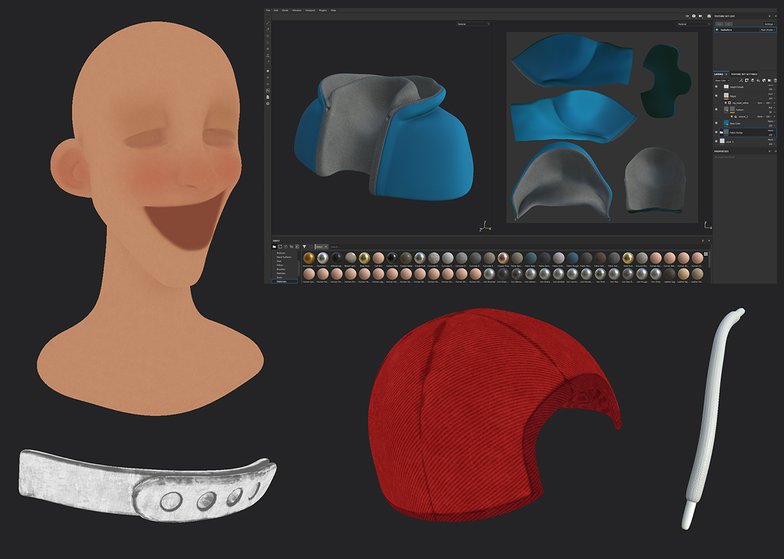 With all the textures ready it was time to create all the materials. I wanted to use Arnold for the render, so I used the aiStandardSurface shader for everything except for the hair; in that case I used the aiStandardHair shader. At this point I had an HDRI environment in the scene just to take quick renders and check the shading. I had to do minor adjustments back in Substance Designer on some maps. 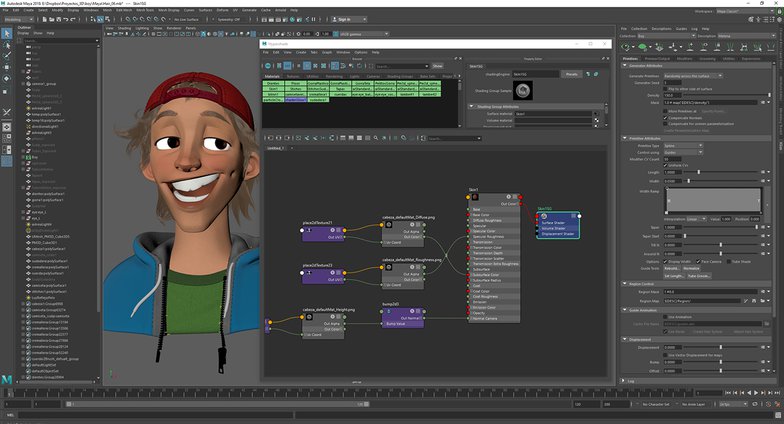 I had in mind to create a couple of setups for the lighting; this first one was really simple. I started placing the key light on the scene and then started adding the filling and rim lights if needed. In this case I use that directional key light, a backlight to have a little bit of rim on the hair, and a HDRI environment to fill the shadows. During this process I was still tweaking some materials, especially the hair and skin.

For this second setup I had in mind to make a night shoot, like if the character was in some kind of club or surrounded by neon lights. One of the biggest differences with the previous setup is the use of fog to add that club mood to the picture. I used 4 area lights with different colors, as in the previous setup, and started placing the keylight and the rest. And that’s it! This was the last step for the making of the Dude render.

I would like to thank Jonatan Catalan for his guidance during the creation of this piece. 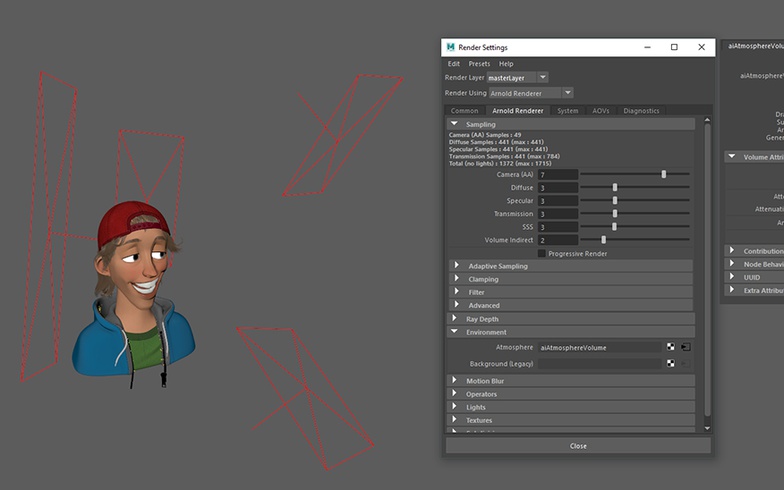 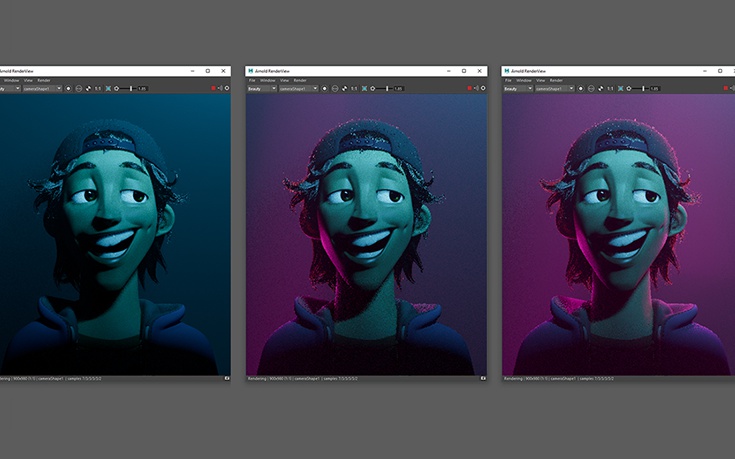