Recreate a stylized illustration in 3D

Hi, my name is Alsu Rakhimova and I am a student at Think Tank Training Centre specializing in 3D characters for games. My journey in 3D started a year ago when I first heard about the opportunities in this field from a friend of mine. I started studying 3D on a regular basis after my day job by following tutorials by Tobias Koepp, Yulia Sokolova , and many other talented artists on YouTube. After that, I decided to focus on 3D full time and enrolled in the Think Tank Training Centre Online program.

In this article, I will explain to you the main steps of creating my recent piece The “Swordfish Shack”, based on a beautiful illustration by Rebecca C. Chan, which was my Foundations term’s final project supervised by Darrell Abney. I will talk about the planning, modeling, texturing, lighting, and rendering stages.

From modeling to final render

The image has around 70 different objects and two stylized characters. Therefore, before starting the work, I had to clarify several questions including:

My answers to these questions were:

In addition to that, I devoted a day to gathering different references of each item in the illustration on Google and Pinterest. I needed the references to be able to model and texture the objects as realistic and detailed as possible. I organized all the images by item using PureRef. Having references also helped in the cases, when the object’s design was unclear. 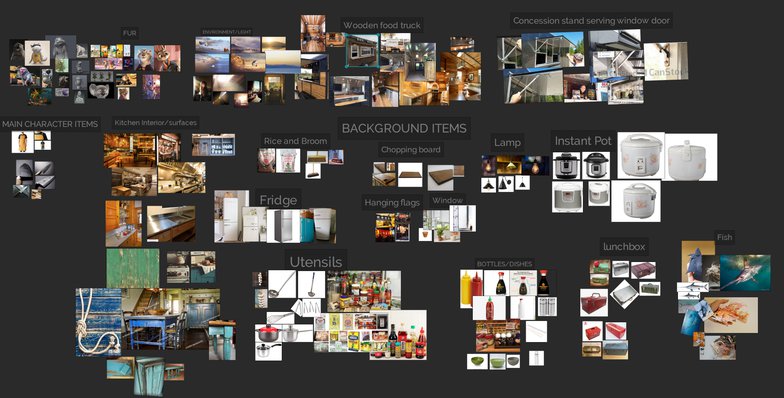 I gathered references for each item in the illustration

The first several days were devoted to creating very basic shapes in Maya that would later become detailed objects. These were just spheres and cubes of different sizes that were placed in similar positions as in the concept. I also created a new Camera and attached the original illustration to it (Attribute Editor > CameraShape > Environment > BackgroundColor > [choose your image]). While adding more objects, I kept comparing my project to the illustration by hiding and unhiding all the objects: creating a shortcut that hides all the objects at once helped a lot (please see this article on how to create the shortcuts in Maya). I was also adjusting the camera’s Focal Length and Angle to match the illustration. Tip: don’t be afraid to change the camera from time to time as you keep adding more objects. Make sure to lock your camera and save it as FBX file on your computer in case you accidentally move it.

At this stage, I already started playing with lighting. It helped me to understand how the light works in the illustration and what objects get more light and, therefore, require more attention in the upcoming stages.

The main challenge during the blockout stage was the camera alignment

After I was happy with my blockout, I started the modeling of every object in a separate Maya file. I placed every basic shape to the origin (0,0,0) to take advantage of the symmetry and also attached the reference image to the camera behind my object (View>Image Plane>Import Image). Though the illustration has many different items, some of them were quite similar to each other: bowls, boxes, carton plates, glass jars, etc. For these types of objects, it was enough to slightly deform the width and height using the Scale tool to create the new object.

After I modeled my characters, I decided to pose them right away instead of sculpting and texturing them in A-pose. Since the goal of the project was to render one frame, I decided that this strategy would save me time.

I decided to sculpt the fur in Mudbox using the standard brushes like Wax, Knife, Grab, and Crease. I was focusing on the silhouette (the back, the cheek fur) and tried to make the fur edges sharp and defined to create an illusion of cat fur. Later, I added whiskers in Maya using the curve tool and extruding a small circular face along that curve (please see this tutorial for more details). Later on, I also used the V-Ray Fur tool to add very small peach fuzz that was complimenting the look (Length: 0.3, Thickness: 0.005, Gravity: -1.5; Bend: 0.4). Tip: add V-Ray Fur at the last stage and switch it off during your test renders as it is quite “expensive” and takes a long time to render.

After I finished sculpting my objects, I baked the displacement maps using the tutorial by Akin Bilgig and exported these maps to Maya. 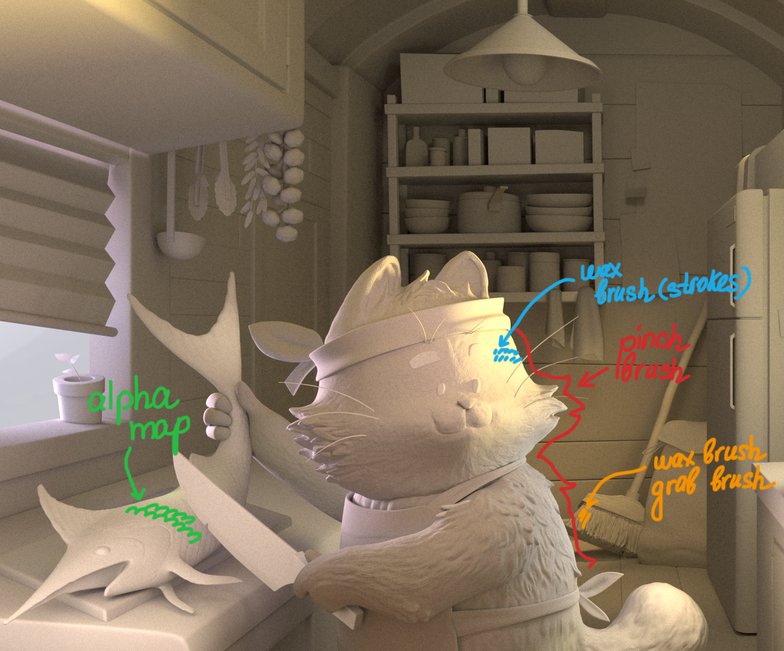 Texturing was one of the most important parts of the process that helped me to add more details to the objects. My general rule was to create Diffuse, Reflection, and Bump channels in Mari for every object. Thanks to the Bump channel, I did not have to sculpt the surface imperfections like scratches, cracks, etc. To save time, I textured several objects with similar material at once – I had several projects based on the material: raw wood, painted wood, cat fur, fish scales, metal objects, fabric, etc.

When the object was small and far away from the camera (small glass jars and utensils), I was using simple V-Ray materials and adjusted their properties (color, reflection, refraction, refraction IOR, etc.) to create the texture instead of doing that in Mari.

Since I had the references of real objects ready in my Pureref, I was trying to follow the real-life examples to picture the ageing of materials as realistically as possible (chipping paint on the drawers, scratches and splatters on the kitchen surfaces, spots on the apron, etc.).

For some objects, I was using real photos for the diffuse channel. For example, while texturing the fish, I projected the photo of a swordfish on my model and then adjusted the colors to match the concept. For the reflection channel, I added some green and yellow colors - to get the highlights to look different depending on the angle. I loaded these maps to a simple V-Ray material with 0.85 Reflection Glossiness, 1.6 Refraction IOR, and an Opacity map that made fins look semi-transparent at their edges. 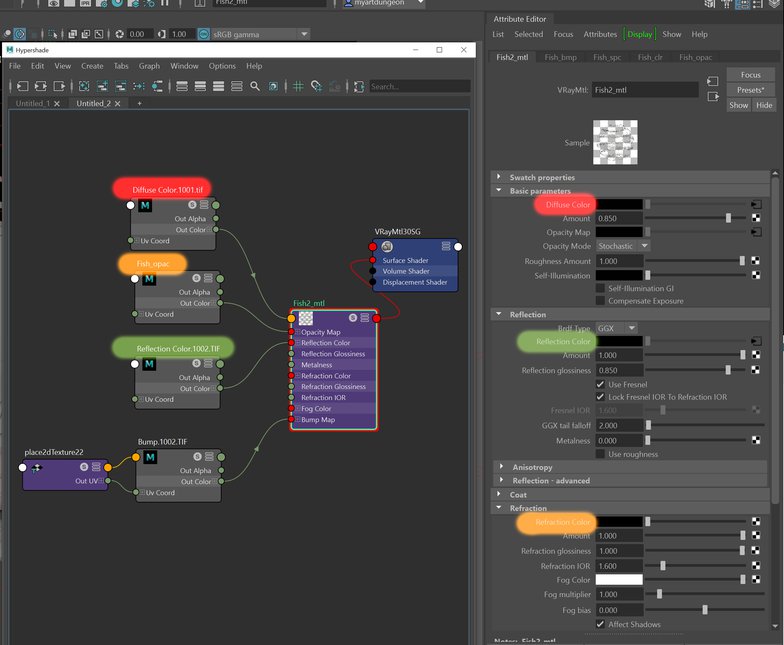 Example of Fish material in Maya Hypershade window: I plugged all the TIFF channels exported from Mari to a simple V-Ray material’s properties to create the Fish shader.

For the lighting, I was trying to combine the HDRI (which was playing the role of the sky light) with the supporting rectangular light sources. However, this strategy did not work out for me as the light was not matching the time of the day depicted in the concept. Therefore, I decided to rely solely on the rectangular lights. I was adjusting the light properties a lot: light’s color, directionality, the channel they affect, the objects they affect, etc.

For certain objects (soy sauce bottle, ceiling light), I created small artificial lights that affected only their reflection and not their diffuse. This helped me to create reflections of certain shapes and colors. I also had lights that affected only one object – this helped me to adjust the light in a way that was not ruining other parts of my scene. Adding artificial shadows (black planes on the screenshot below) helped as well. 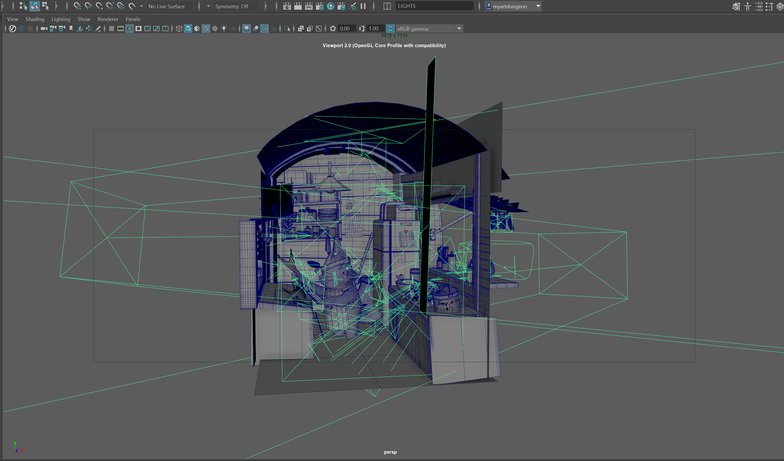 Beauty render before post-processing in Photoshop.

Atmosphere: In order to capture the so-called “God Rays” effect from the Concept, I assigned an “Environment Fog” property to one of my Rectangular Lights and adjusted the Fog’s properties (Fog Distance: 900, Fog density: 0.4, Fog height: 200) to get the desired effect. I exported this image to Photoshop as a “Screen” layer with 50% Opacity on top of my main Beauty Render layer.

Finally, I used Photoshop to add dust particles and smoke, and to color correct the image using Hue/Saturation and Brightness/Contrast adjustments. Masks were a big help in that process to adjust everything in a non-destructive way.

Final render. The timelapse video can be found on my Artstation account.

My mentor Darrell Abney and my family gave me honest feedback and suggestions that helped me a lot in improving this work.

Don’t be afraid if your workflow becomes non-linear: it’s okay to come back and fix some minor mistakes from earlier stages. Just try to not spend too much time on it. In some cases, you are the only person who will see these tiny mistakes