Before we get started 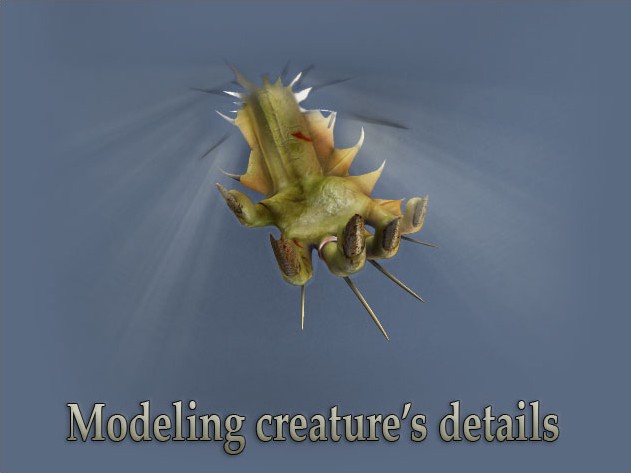 I have always believed that the smaller details are the ones that make the difference. Look at the dragon for example, it just won't be the same without all the spikes, fins and other details on it. Having said that, this tutorial isn't about making your model from scratch, its about taking your creature (dragon, serpent, orc, demon etc') and giving it personality with those details. I will go through all the major points of adding these details using my dragon model to demonstrate it, starting with how to setup the topology of your model to prepare it for the modeling and then move on to the modeling, starting with creating a basic spike/horn, creating fins of all sorts, modeling the bottom scales / spines, and ending up with using those techniques to create a dragon's wing. 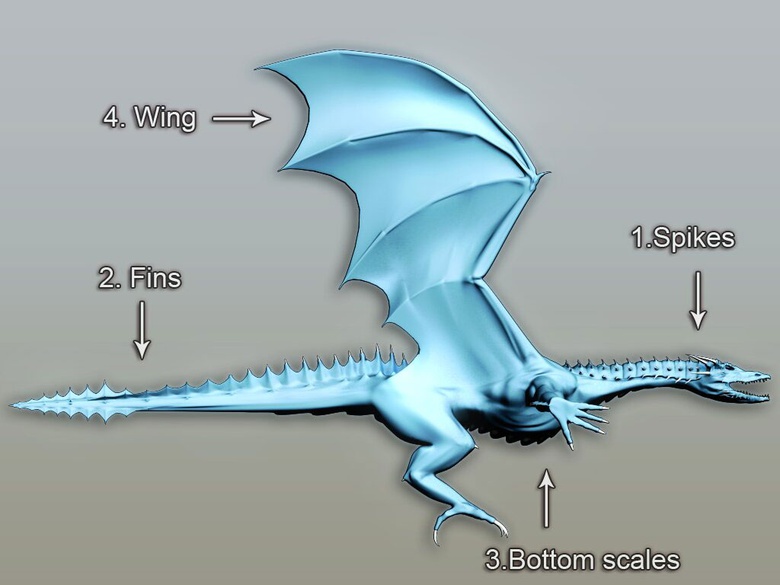 Before we get started

The point of this tutorial is to show you how to approach adding details to YOUR model, keep in mind that all the following steps are for demonstration and will probably require modifications on your models as each model is different. there is no right and wrong here (besides perhaps some basic rules of "correct clean modeling" which I will mention next) and I strongly suggest that you go through this tutorial just to get an idea on how to approach things and not to just clone each step as I show.

3 tips before we get started

1. This should be your basic guideline when you model anything: Try to use as LESS polygons as possible to get what you want, its important to keep everything under control. Have a dense mesh where you want lots of details, but be cheap on polygons where you don't. Always try to keep it all quads when you go from dense areas to flat areas because polygons that aren't quads usually don't. get smoothed well and don't. give you as much control over your model (like edge loops for example). when making changes in the model, keeping all the polygons 4 sided is sometimes as hard as solving a rubiks cube, keep in mind that 2 triangles can cancel each other (see example).

2. A few very useful shortcuts and tips when modeling:
While poly modeling, it is advised to often check how things look both before and after the smoothing. To do so quickly without getting out of the sub object mode, use the "show end result button". Things might get a little cluttered when you look at the end result so it is advised to set ISOLINE DISPLAY on your turbosmooth modifier, it will then only show you the edges of the base mode (see example 2A).
Display shortcuts -
"F2" - color fill selected polygons.
"F3" - wireframe mode.
"F4" - edged faces mode

Sub object shortcuts -
"1" - vertex mode
"2" - edge mode
"4" - Polygon mode
*Very useful - If you hold CONTROL while switching from one sub-object mode to another using the icons (not the shortcuts), the selection will get converted (see example 2B).

3. You do not have to worry about making the "right" amount of polygons (like when you extrude for example) to get what you want at the first attempt. It is always recommended to try and start with the minimal amount and if you decide to add more it should be easy when the model is clean. For example -if you made a spike and you now decided you wanna make it longer and with a more defined shape, you could select an edge and hit ring and then connect to add more edges and re-shape it. (see example 3A). When your model already has too much of a dense topology in a certain area and you are looking for a quick way to flatten / soften it, using relax + soft selection can work very well sometimes (see example 3B).
It is recommended to often give different ID's to polygon groups so that they could be selected easily with a single click.
You might also want to give a Multi sub object material to your object so that you could color those groups separately. (Note that in this tutorial I am only using 2 ID's but when Things get complex, you might wanna use more.

Setting up the topology

This is probably the most important part and it comes before we actually begin to model the details. The topology is the base on which the details are modeled upon. This is when we plan out the flow of the details that we will be modeling. As I mentioned above, you should make sure you don't. have too many polygons where you don't. need them, and the hardest part - you should keep everything in quads (as I am about to demonstrate again).

1. Start out with a simple quad surface.
2. First thing to do is to roughly change the flow of the polygons however you wish using the "cut tool".
3. Use target-weld to get rid of vertexes you don't. need. move the vertexes to form the flow you want.
4. Those steps resulted in many triangles, now its time to get rid of them. remember that 2 triangles can cancel each other.
5-6. Now that we have the topology ready, we can model the details in.

The next parts deal with how to actually model the details.
Â

Lets start with the actual modeling now.
We begin with modeling a basic spike.
As you could see later, this technique will serve us when we work on other types of details (such as the fins and the wing).

1. We start out with a simple quad surface. in this case, a single polygon should be enough to start from.
2. First make an extrusion upwards to make the skin around the spike itself.
3. Now extrude inwards to create the hole.
4. Make another extrusion and give the polygon ID2 so that it would appear differently and could be easily selected later.
5. Make an extrusion upwards.
6. Make another extrusion upwards and scale it down to make the spike sharper.
7-8. Move the top polygon to any side to give it an angle. Now you have a basic spike. you can always tweak it easily by selecting and moving edge loops, and you can always select edge rings, hit connect and add more complexity to it.

Tip - if you prepare your topology right, you don't. always have to make the spikes one by one. I've made the ones on the back of the neck of the dragon at once.
Â

Moving on to a more complex shape, now I'm going to go through the main steps of modeling the fins. Some steps here are pretty similar to the steps of the wing modeling
1. We start out with simple quad surface. This step starts after you prepared the topology on your model.
2. Select and extrude every few faces (minimal distance of 2 polygons between each extrusion) in the edge ring.
3. Make a few more extrusions and move them if you wish to give the fins a certain direction.
4. It is optional to use the top polygon to create a spike (as shown above).
5. Select the polygons between the extrusions (it is advised not to select the top parts).
6-7. Make one or more extrusions with a very low value and use Scale to narrow the distance.
You have 2 options for closing the fin8. Option one - Adjust the upper edges to form a smooth line. This way you keep everything quads but if you are making allot of fins it would mean going through each one and doing it by hand.
9-10. Option Two - This way is more automatic but results in some tri's: first convert your polygon selection to vertex holding control and switching to vertex mode through the icons (not the shortcut), get back to your polygon selection and delete them. get back to the vertexes and weld them.

Now, lets see how to model creature's bottom scales and spines.
In this part there's allot of room for your own creativity and experimenting. Try just to get the general idea here and not to clone every step because there is no right and wrong here and lots of different things can work to get different shapes. It is especially important this time to have everything ready ahead because in this step you are making every step to your entire model at once (and not locally).

1-2. Go to the relevant part of your model and make sure it is ready, try to make the gaps as even as you can and select the edge ring.
3. convert your selection to polygons (using control), get back to edges, apply chamfer and get back to polygon selection.
4. Extrude the polygons, scale them wider and pull them back slightly.
5-7. Select the edge ring, hit connect and pull the line slightly lower. go back to polygon selection, extrude and scale wider.
8. Extrude again, but this time change it to extrude by polygon to create 2 bulges on each part.
9. scale the polygons down.
10. select the long middle edge loop and use extrude edge.
11. select only the highest vertex on that edge in every part (try selecting from the front view if it allows it) and pull down.
12-13 select similar polygons on each part and extrude. It is recommended at this point to start saving sub selections by giving them different ID's so that they could be selected for further editing with a single click.
14. So now we have something basic that serves our goal.
15-17 But this could be pushed further and further by making more extrusions and moving more vertexes you continue to add more details and make it more and more unique.

This is the final part of this tutorial. It has little to do with preparing the topology of the model ahead this time because This can start from a single polygon (unless you wish to fully connect to wings to the body like I did with my dragon).

This part combines allot of the methods we covered in the earlier parts.

Note that I often tweak certain vertices's more than once as I go along.
1. After you decided where the wing comes from and prepared the polygon on the model, extrude it. 2-3. Make more extrusions as shown.
4-5. Extrude the "branches", make sure u make an equal amount of extrusions to each branch for the following steps
6. You might want to add a spike there.
7. Select the polygons between 2 branches, extrude with a value of 0 and scale to make them less wide.
8. Unselect the starting polygon of each branch so that you could Use Bridge to fill between the wings.
9-10. Delete the 4 polygons of the gap and fill the hole (ON BOTH SIDES OF THE WING) using create in polygon mode.
11. Check "show end result" to see that its smoothed properly.
12-17. Repeat the same between the other branches.
18-20. make the wings' skin rounder (you might wanna slightly use soft selection to do it quickly).
21. Now that you have a good clean solid base, Start adding more details and refining the details as you see fit. 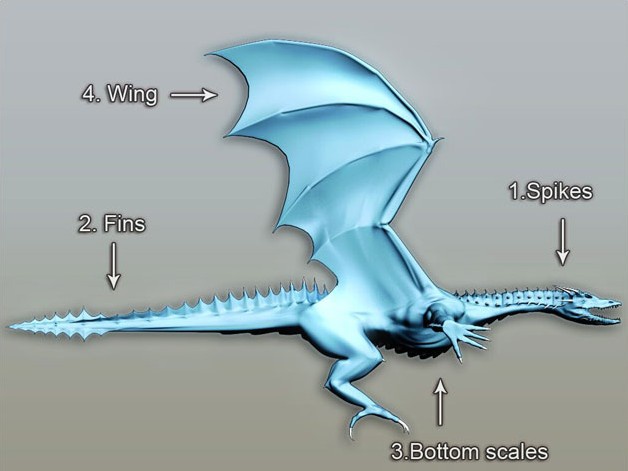