I've written this tutorial in response to a request for a tutorial on spline modelling a nose on Maxforums. It's been a while since I used surface tools as I've been useing mostly polymodelling lately. It touk me quite some time too creating this still slightly messy nose, and I'm sure if I would have used my familiar polymodelling technique demonstarted in my mouth modelling tutorial I would have cut my time at least in half. Still and this is the point I want to make, this might not be the quickest of techniques but it does teach you valuable things. It's my opinion that every modeller should at least have tried every one of the more popular techniques like NURBS, spline modelling, polymodelling and boxmodelling before sticking to one. This teaches you for one to see things from a different perspective, it forces you to rethink your strategy and it might even surprise you at times when you'll think of something you just couldn't see before.

Spline modelling is excellent in the way that it forces you to use a minimum of splines to create your shape, you are forced to think before you act. If you don't you'll end up with a mess of bezier curves that you just can't handle. Even more it will get extremly hard to get a smooth surface.

I hope this tutorial will learn both the spline modeller and other modellers a thing or two about modelling with splines but also about modelling in general. I don't want to stress this tutorial as being A NOSE TUTORIAL, it shouldn't really matter what you are modelling, what is important is that you study your subject first and once you think you know enough it is time to open your modelling tool.

I started with taking some pictures of my own face, A digital camera can be a very valuable tool for every modeller. Of course it's an expensive toy so you might just want to settle for a webcam, they come cheap and do wonders studying your own face.

I used a side view and a front view photo in the right and front viewports of Max. My 3th picture was one of the bottem side of my nose which I used just as a refernce to remind me how everything looked down there.

A beautiful nose so my girlfriend tells me. personally I might have created myself with a slightly different design but I guess we don't have much say in that do we. Now we modellers do can play God in our own limited way by shaping our models the way we want. So that at least softens the pain and frustration.
Ok down to Max:

In the side view I created my first line, I placed a number of points where you see red dots. Think about where you place these!! You don't want more dots then neseccary, less is better then to much.

Most of the ones I placed where needed for the curve the nose was making, at the dot marked with the red A my nose bone bumps out slightly so I choose to add enough points to make this visible in my model. 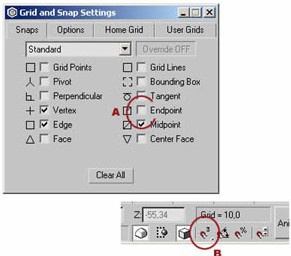 Soon you'll need to connect curves so you'll get a grid that forms the skeleton of your model. You do this in the perspective viewport and put 3d snap on (button marked with a B)

If you right click on the 3d snap button the grid and snap settings open and you can select different snap settings. I used snap to endpoint and deselected all the rest for this tutorial. You should read up on how to work with splines somewhere else as I will not go into depth on this subject. An excellent tutorial you can find on the website of my friend Erik Asorson.

Here you see how I created a second curve with corresponding verts to the first curve. See to it that they correspont as you will need to connect them later to make the overlapping skin or surface. Again try to feel how your subject is build, what is important and what is not. 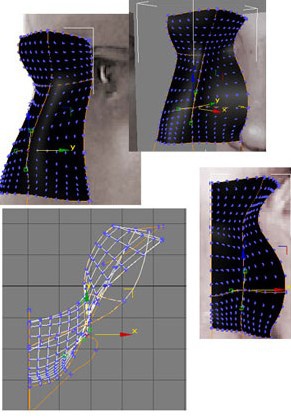 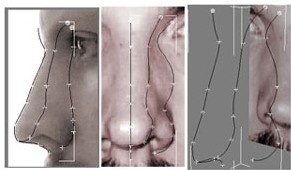 You see here how I created a 3th line (top), these 3 lines define the global shape of the nose, all we need to do is connect
all the points with curves so that quadpatches are formed. A quadpatch is a surface with 4 corner points. You can also create tripatches with 3 corner points but they are harder to smooth out and and most modellers avoid using them.

If you add a "surface" modifier on top of your modifier stack you can see the effect right away and start tweaking those bezier handles until everything is smooth.
I've seen tutorials that prefer to create everything in one viewport and afterwards dragging all points in the correct 3 dimentional position. This however is in my opinion a real headache, if you take it one step at a time and make everything smooth right after you created it you won't get frustrated and there's less chance you'll give up on your then seemingly hopeless mess. 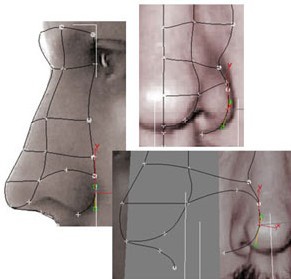 So far so good, I'm getting some good results as I go so I'm still relaxed and happy. Of course now comes a bit of a difficulty, the entire nastral thingie, baaahhh time to give up.
No just take it easy, get some food, a drink and again one step at a time, think before you act. You want a minimum of control points, that's important. You will also need the top viewport more often now to get a good view on those horizontal curves.

Follow the screenshots and find out how I create this nastral. 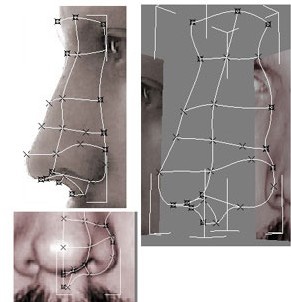 As I go I'm inserting more points, refining those curves. Don't mind about having to much ponts to create that surface, we'll deal with that later. Just always minimize that's all that is important.
This is not polymodelling and the biggest difference is that with bolymodelling you need a poly for every detail. Here however you have bezier curves that give you a LOT of control over that surface without needing much patches.

See how I create new lines and points to create the shape I need. 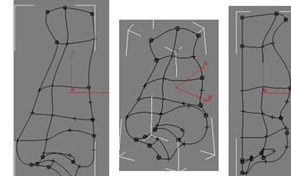 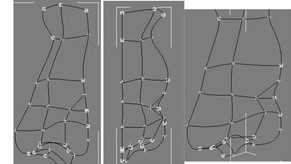 You'll notice in the left image that I create straight unsmoothed curves inbetween the controlpoints. I always do this because it's easy to smooth them out afterwards, however it is hard to create them making cureves right away as the curves are hard to control especially in the perspective view.

This is where one could use the Splinetools script. With it you can select part of a spline and smooth that instead of smoothing the points at the end of the splines segment.

The way I do this is create the segment as a straight curve, then convert the segment to a smooth curve and then, convert it to a bezier. Why go through the extra smooth step, well you'll see that when you do this you're bezier handle will be nicely along side your curve where else when you go from straigth to bezier you will have trouble finding your bezier handle. 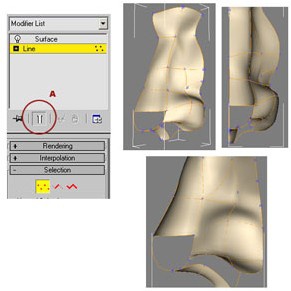 Note: sometimes the surface flips it's normals, or even just a few patch normals but not all. Don't worry about this, it will get back right when you close a few holes here and there.

TIP 2: use the Fuse button to get points to pack together as if welded but without actually welding them.

TIP 3: Use area selection to select groups of points instead of individual points. 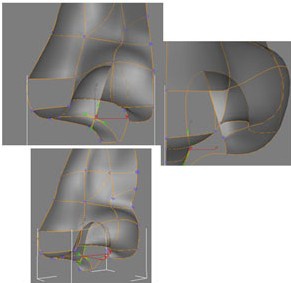 This might seem like a sudden jump forward but all I did was simply pull tht point that was there all along upwards making a cavety. I did a lot of teaking the bezier handles here to make it all look good with this minimal amount of points.

If you are wondering how I made the skin transparent, well it's a Max feature, no plugins required. Press Alt-X to do it !!
Â
You see I made a bit of a mess creating as much curves as I did above the nastral. I will clean this up later ! 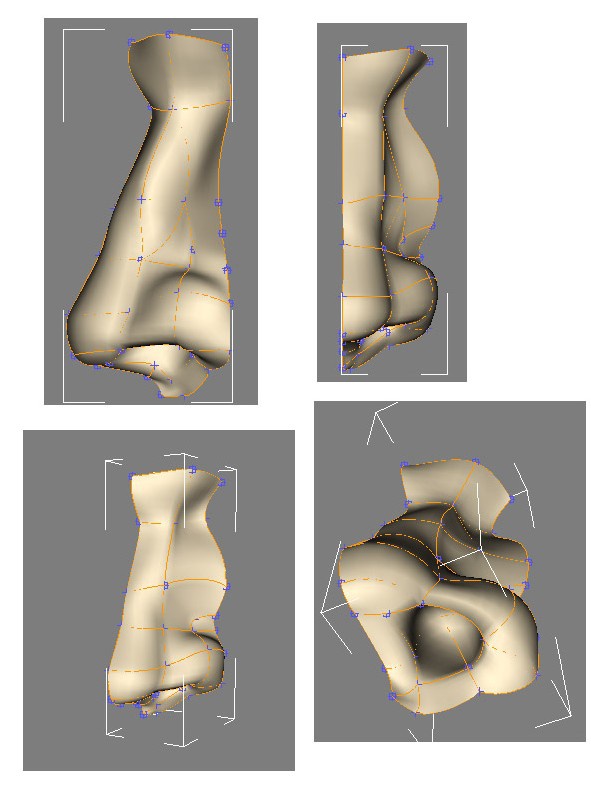 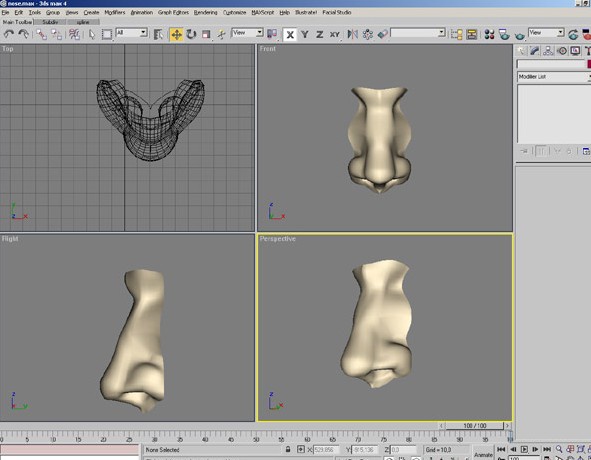 There are still quite a bit of things I would tweak better before actually call it finished. But for this tutorial this result will do.

I hope this was usefull, insightfull and maybe even fun to read, who knows. In case you want to contact me for questions remarks, or just a friendly chat you an reach me at or at david@artdwarf.com