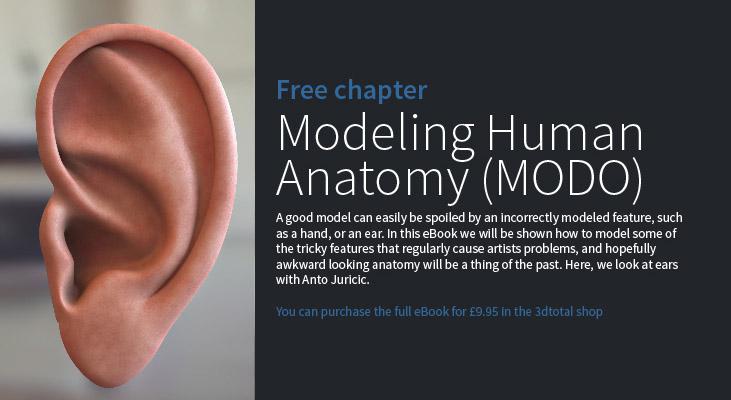 In this first part of this tutorial we will cover some basic techniques that will allow you to easily and efficiently model the human ear. Following step-by-step instructions won't be quite enough on their own to make this happen, but a true understanding of shapes and the relation between them can lead you to a successful model of an ear.

Unfortunately it's impossible to save artists from Latin names because learning these names can be truly helpful when it comes to modeling such complex shapes. Although the auricle is made up of 15 or more different parts, for the sake of simplicity I will cut it down to the most basic ones that form the primary and secondary shapes. The most expressive and longest part of the ear is the helix, which is the green part of Fig.01. As you can see it curves from the earlobe around the auricle and ends almost inside the center of it. 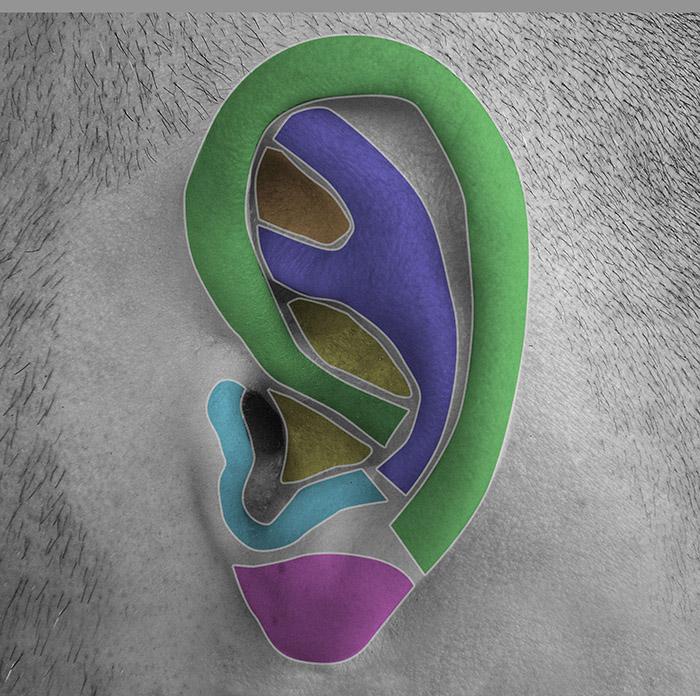 Next to it is the antihelix (blue area). This is cartilage that is Y shaped and ends at the upper helix. The superior and inferior crus is between the antihelix legs and is a triangular shaped cavity called the triangular fossa (orange).

Surrounded by the helix and antihelix is the superior concha (yellow), which is divided from its lower part – the inferior concha – by the end of the helix.

The bottom of this cavity is surrounded by the Tragus and anti-tragus (light blue).

At the bottom of the auricle is the lobe (pink), a soft cushion that hangs almost freely from the antitragus. There are a few parts that cover areas in between, but in order not to overload this tutorial with Latin names I have simplified the auricle into these six major parts. When modeling the ear most of the smaller parts will be generated by bridging edges between major parts.

I guess now it's time to do some modeling but before that we should do some planning. The plan is to make an image plane that we are going to use as a template for laying down polygons using the Pen tool in modo 401. So the next step is to lay down the blueprint for the polygons as you can see in Fig.02. 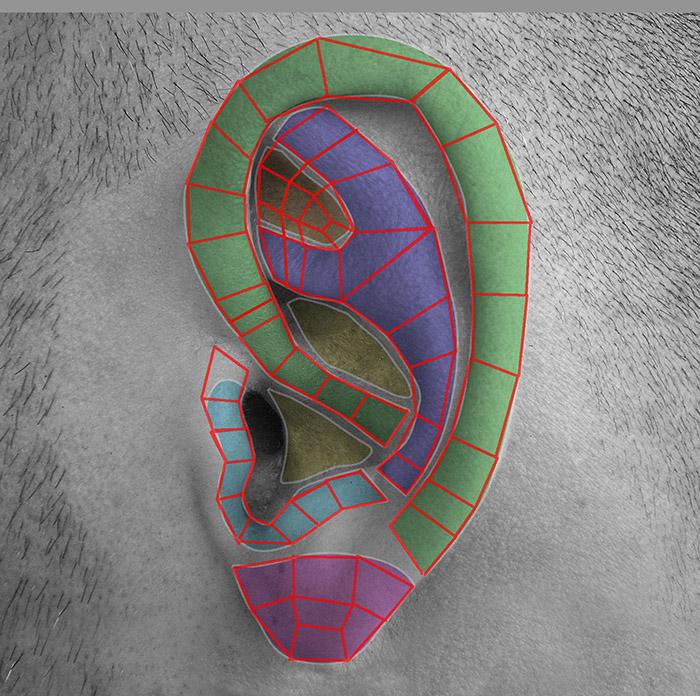 The trick is to make all the colored part of the auricle compatible in terms of edges so they can be connected by bridging edges or by merging vertices. If you are about to follow my instructions step-by-step I strongly suggest you make your own blueprint by imitating Fig.01. That way you will have better understanding of the auricle anatomy.

To set an image plane in modo 401 you have to make a new backdrop item and in the image selection, choose "load image" and load your blueprint. You will also have to set Projection Type to Left because we are working with the left ear. If you do this properly you will have your blueprint loaded as in Fig.03. 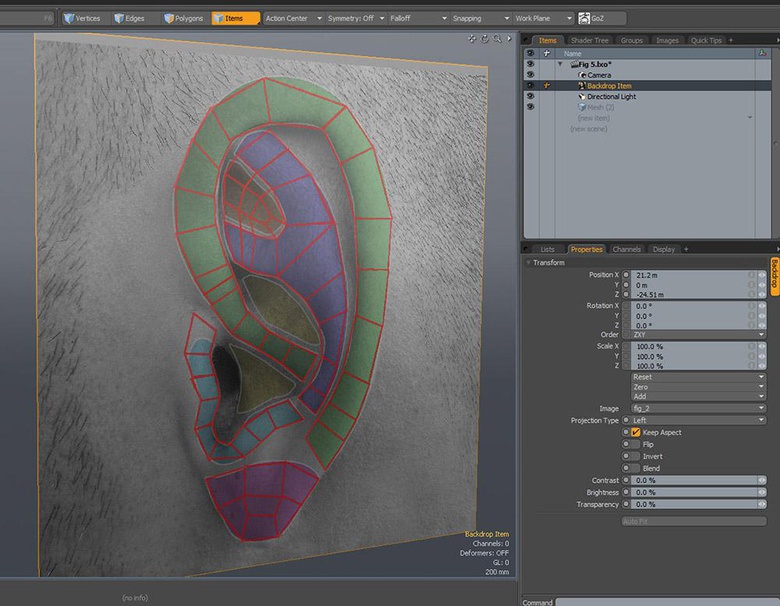 The next thing to select is your backdrop item and offset it on the X axis. That way the blueprint won't stand in your way when you model is in perspective view, but will still be visible in the viewport.

Modo 401 tip: You can drag and drop any image from your explorer directly into the viewport to make a new backdrop item.

Now the backdrop item is ready we need a new item; this time it's a mesh item. Again make a new item and choose "mesh". This layer will contain geometry for one of our six major auricle parts so let's make the first part. Since the backdrop is set to left projection, go to the left corner of the viewport and set the view to "left".

Now let's set the options for the Pen tool. On the left side of the modo interface you will find the modeling tools and under the Basic tab select the Pen tool. In the Pen options menu change the Type option to Polygon and check the Merge and Make Quads options (Fig.04).

Now you are ready to make some geometry, but before you jump into tracing out the polys on your backdrop I suggest you try some free runs with this tool to figure out how it responds. 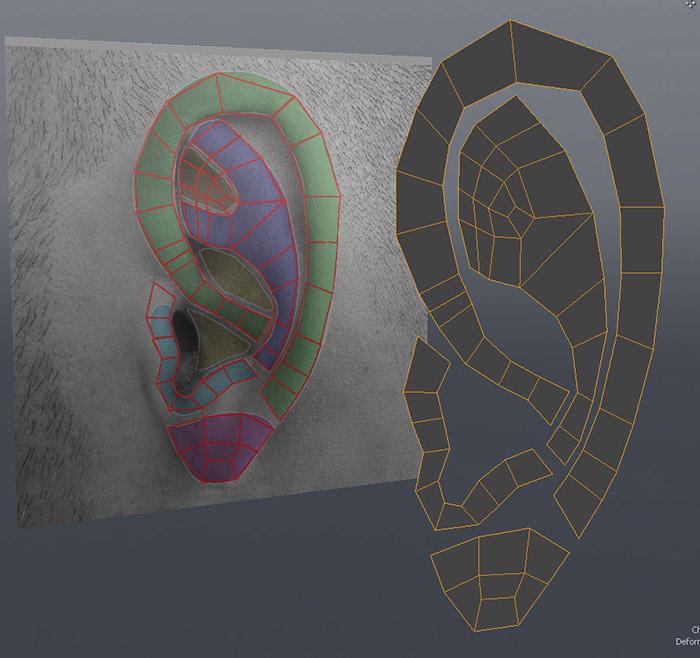 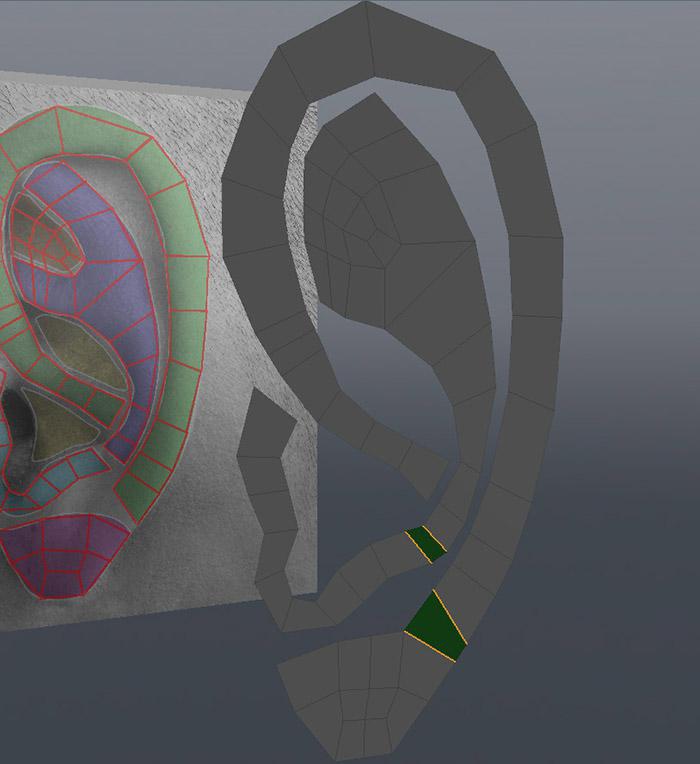 Modo 401 tip: If you hold down Ctrl and press 1 or 2 on the keyboard you will gain access to the viewport pie menu. From there you can quickly customize viewport settings and shading styles.

Now let's fill the gap between the helix and antihelix, and the gap between the tragus and helix using the same technique. Select the edges highlighted in yellow, as in Fig.07, and bridge the separated parts. The next thing to do is generated the geometry shown in green in Fig.07. 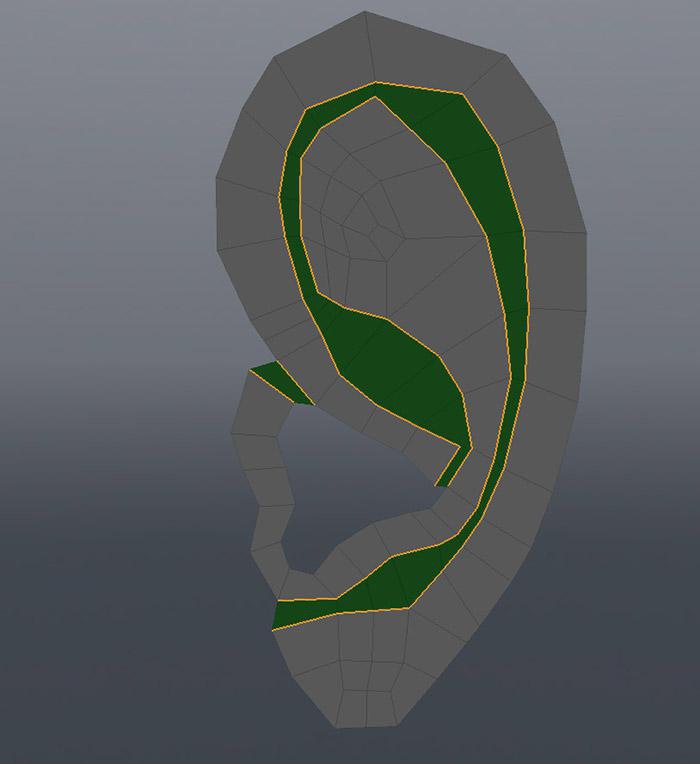 It's time to give the geometry some depth since until now our auricle model was flat on a Z axis.

Select the loop inside the hole that's left by double clicking on one of the edges in the loop. Now extend the edges along the X axis. To access the Extend tool go to the Edge tab and press Extend. You can also access the tool by pressing Z on the keyboard. Again I am marking edges with yellow and generating geometry in green.

Another way to reactivate the same tool again is to click on the extended edges while holding Shift; do so and reshape the selected border with scale handles to make the ear hole shape as illustrated on the second image in Fig.08. Extend this once again on the X axis to make the ear hole channel and offset it a bit in the Z axis. 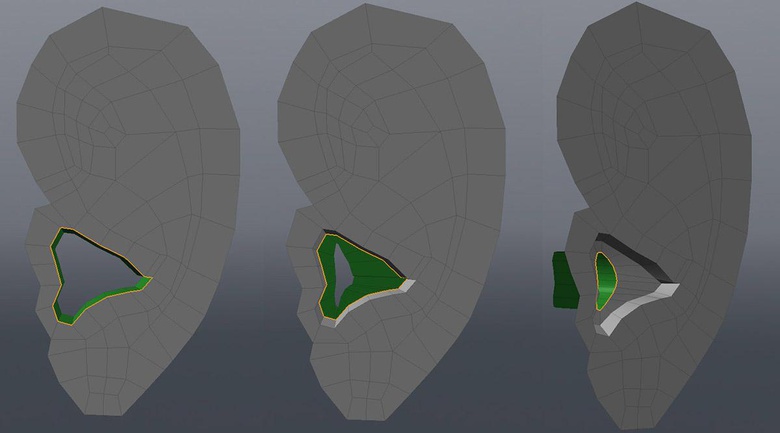 Modo 401 tip: Use Del, 1, 2, 3 etc., on the numerical keyboard to quickly change viewport from perspective to top, font or right view.

The next few steps are going to make this model really pop out so make sure to follow them correctly. First select the group of polygons that form the six auricle parts, as shown in the first image in Fig.09. Now press B on the keyboard to access the Bevel tool, extrude the polygons outward with the blue handle and push the inside by using the red handle.

After that you should have something similar to second image in Fig.09. For the next step select three edges at the center of the antihelix, helix and the ridge that separates these two, as shown in the third image of Fig.09. Now press Alt + C to access the Loop Slice tool and click on the viewport to activate the tool.

Now it's time to make the edges smooth. Maybe the best way to do that is to select the Smooth brush from the Sculpting menu and swipe it across the hard edges with a few gentle strokes, but for those who look for a one click solution here is more straightforward tool. Go to the Deform tab in the modo tools and select Smooth. Set Strength to 1,0 and Iterations to 10 and press Apply. You can also experiment with your own numbers or combine the two techniques mentioned above. Your result should look something like Fig.10. 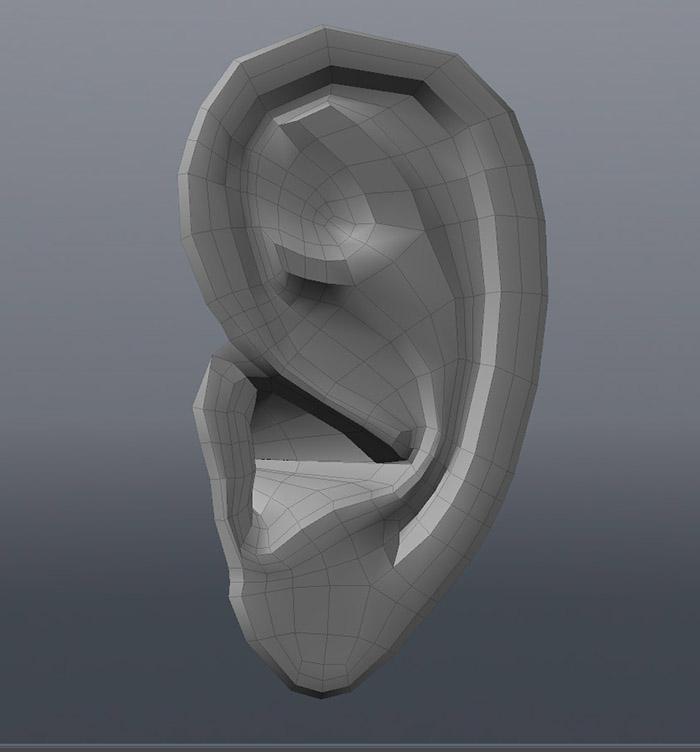 Now you have all necessary geometry for this frontal part of the auricle and it's time to reshape it into something more organic looking. Modo 401 sculpting tools are all you'll ever need for reshaping, proportioning and sculpting tasks. The sculpting process is not something that can be described step-by-step, but I will do my best to point out the most important moves. In order to do that I marked the areas that should be treated with the Smooth brush with blue, inflated areas with green and areas that should be moved with red. If you want to view your geometry in subdivision, press the Tab key. Take a look at the ear from the front perspective and pull out the middle part of the helix and antihelix.

Since the auricle is slightly rotated outwards in relation to the head you should demonstrate this by rotating it on its Y axis by about 20%. Now all that's left to do is build the back of the auricle. Follow the instructions shown in Fig.12 and select the edges highlighted in yellow to extend them. You should generate geometry that looks like the green polygons in Fig.11. 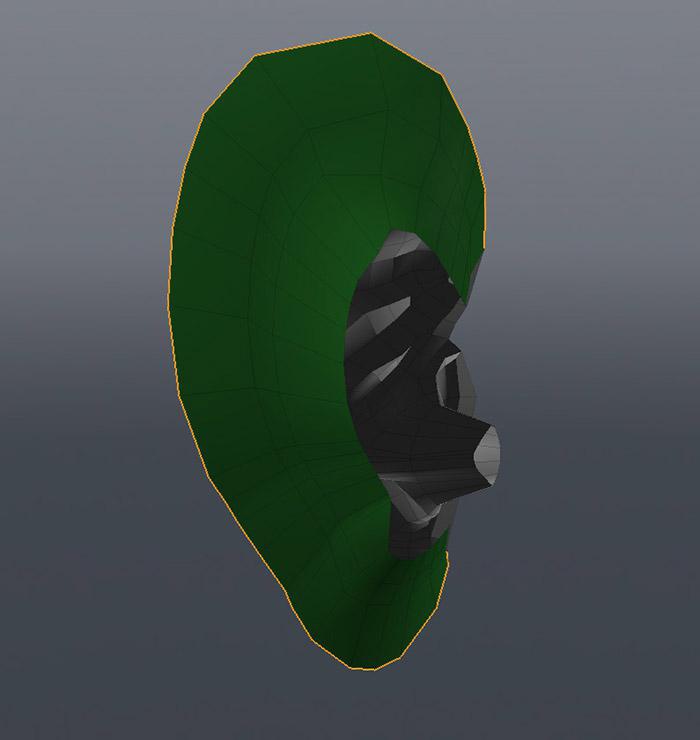 At the end feel free to upgrade this model as you like by adding more supportive edges or reshaping it with the modo 401 sculpting tools. Using the amazing render inside modo I managed to make a decent render in a couple of minutes (Fig.12). I hope that this tutorial will lead you to similar or better results and see you in the next chapter. 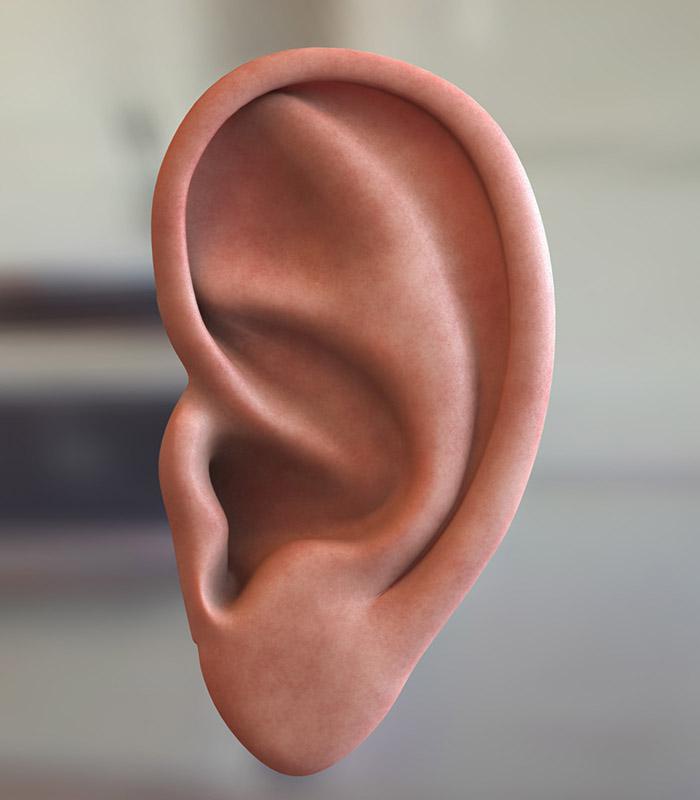