Cesar A. Verastegui Elizondo takes us through his 3ds Max, V-Ray, and Photoshop workflow for creating his sci-fi image, Hidden Portal…

Hello. My Name is Cesar A. Verastegui Elizondo, from Mexico, and I’ve been living and working in Miami for an arch-viz company since 2014. I wrote this making of to show the process I did for the ‘Hidden Portal” image, showcased in the 3dtotal gallery. This image was second in a challenge on a 3D challenge webpage. I hope this can bring you some new ideas and inspiration for creating new CG art.

I wanted to create a sci-fi environment, exterior, and some characters discovering and looking at a portal to another world, so I began by making some simple drawings and sketches of what I was looking for.

At the same time, I was gathering references from the internet of features that I’ll be modeling, like antennas, docks, handrails, characters, bases, and more. That helped me a lot with the design process and to know exactly what will be modeled. This, for me, is an organic process that goes back and forth, so you can have your own changes and modifications anytime and have fun, right? 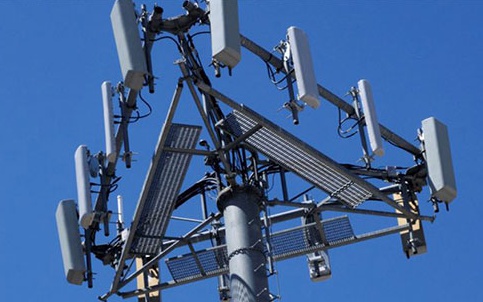 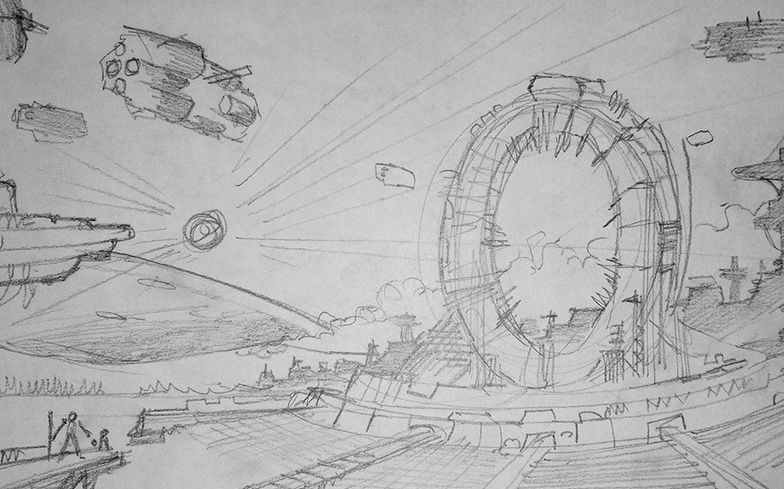 For a sunset shot, I looked for a picture with yellowish/orange tones from the internet, to use as a background. With this in mind, the concept and color of the image was easier to execute. You can find many images on the internet for this, so, the options are endless.

I create a camera in 3ds Max, and with the first models I was able to block a scene that was easy to handle, and later replaced if needed with more complex models. I checked the golden section to make it more equilibrated to the eye, and the viewport background is a great tool to do so. I also draw in Photoshop on top of a previous rough rendering, to see where to add or subtract elements for a very 2D perspective. 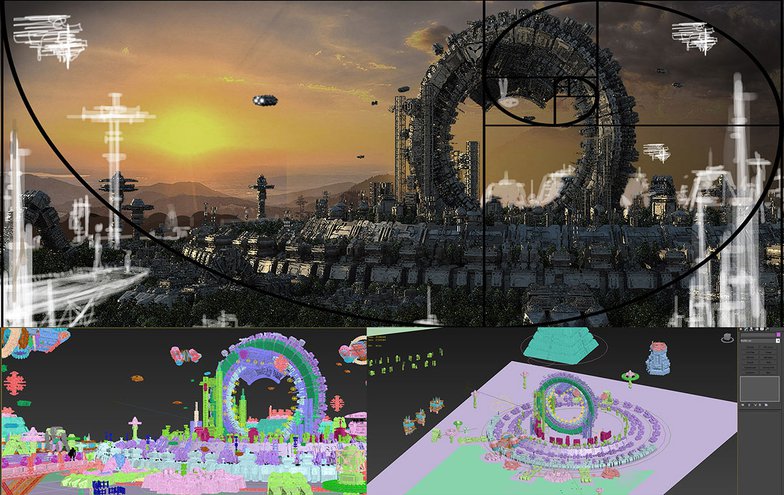 The modeling of the city was the heaviest load of this work. In 3ds Max, I created several variations of low-poly buildings from scratch. I knew it would be a heavy scene, so I tried to keep the poly count as low as possible. The foreground elements would be a little more advanced in this particular aspect. I create antennas, bases, walls, handrails, towers, panels… all of this from scratch, using basic and simple modeling techniques, primitives and modifiers.

Then I created a few variations in scale, form, symmetry, and so on. In some way, I created a small library for kitbashing and played with it, recombining, mixing, and more. I developed a sci-fi wall, which would be the Main Ring portal. I just had to be sure that would have enough polygons to be curved with a bend modifier, and would not look ugly segmented. I also created the rings of the city that would work as wall layers for the surroundings. This geometry would be bent too.

The same technique was used in the spaceships, and sci-fi pyramids and the rest of the assets you see in the scene. Extruding, bending, symmetry, beveling… many of the assets were recycled to form a new asset, rotated, scaled, and so on. The tubes, antennas, and handrails are just rendereable splines, with 3 or 4 segments – some profiles or shapes could be managed later as brushes in Photoshop, but I still wanted to have several in 3D. Organizing the file in layers, in this stage, is very important, so I was careful to name them correctly. Also, to have my selections ready for rendering and post-production. 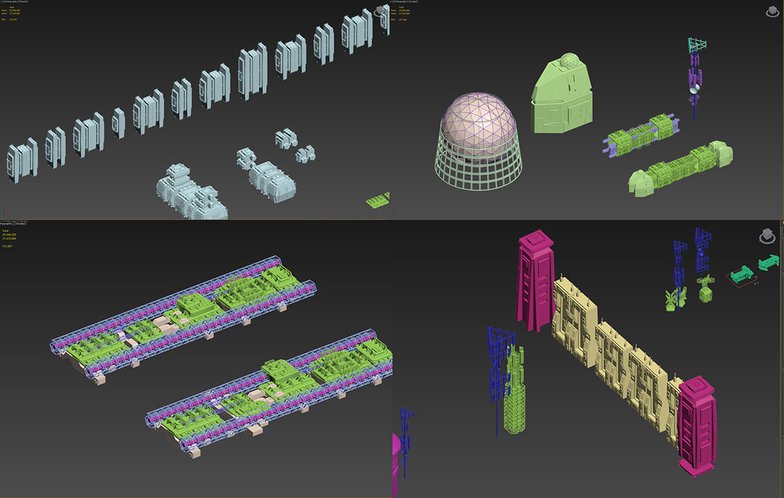 The big mecha on the left was an old model I created some time ago for another scene. It was fully textured, but I did not have the time to rig it. So, to do it fast, I created a biped figure and link the bones to the limbs of the mecha, and made some pose so it didn't look that rigid standing up. Then I just snapshot the geometry and moved it to position. When I saw it in the composition it did not work as expected, so I had to make it look good only for the camera... if you see it at another angle it looks off balance, but this is only the case in the angle of this making of.

The sci-fi balcony where he is standing had some more geometry, and a little bit of more attention to detail. The mecha  looked a little bit alone, so I added a soldier with a cape, to also show scale. The soldiers are literally biped models, with some geometry added suggesting an armature. I created some bipeds, changed its colors, loaded some animation on it, and snapshot the ones I thought could work, so I made like 6 variations of poses and positioned them by hand on top of the wall rings. They were really far, so the LOD could be super low and still work fine. 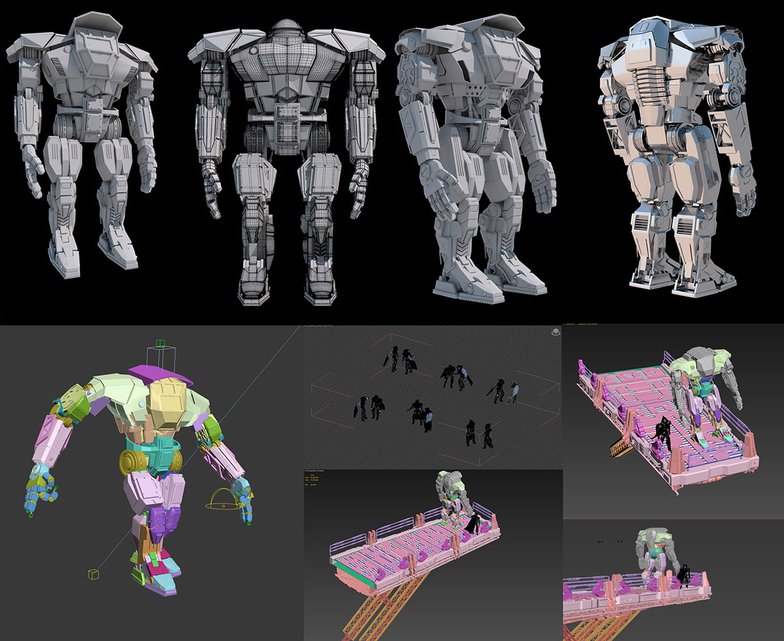 As the scene was growing in size, I continued to use the same technique of super basic modeling for all the assets. At the same time, I was doing a lot of rendering and testing, to see how the shaders reacted to a basic lighting. So I added sci-fi structures wherever I thought it was needed, and this brought some happy accidents here and there. I enjoyed this step a lot as I watched my library of assets growing. 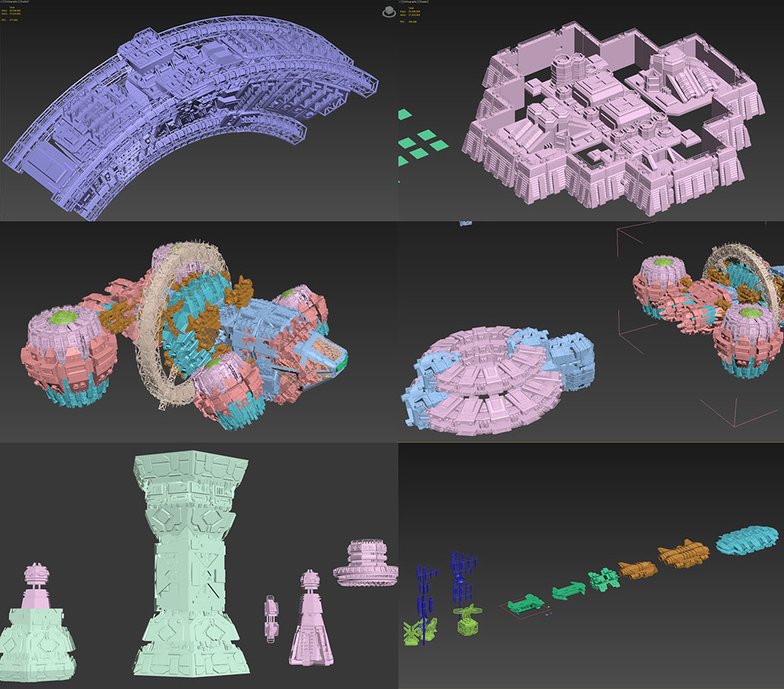 I used some trees from stock, planted some area planes on the floor where I wanted them, and distributed them as V-Ray proxies with a simple Multiscatter object. Also, I added some variations to the leaves in the same Multiscatter material. 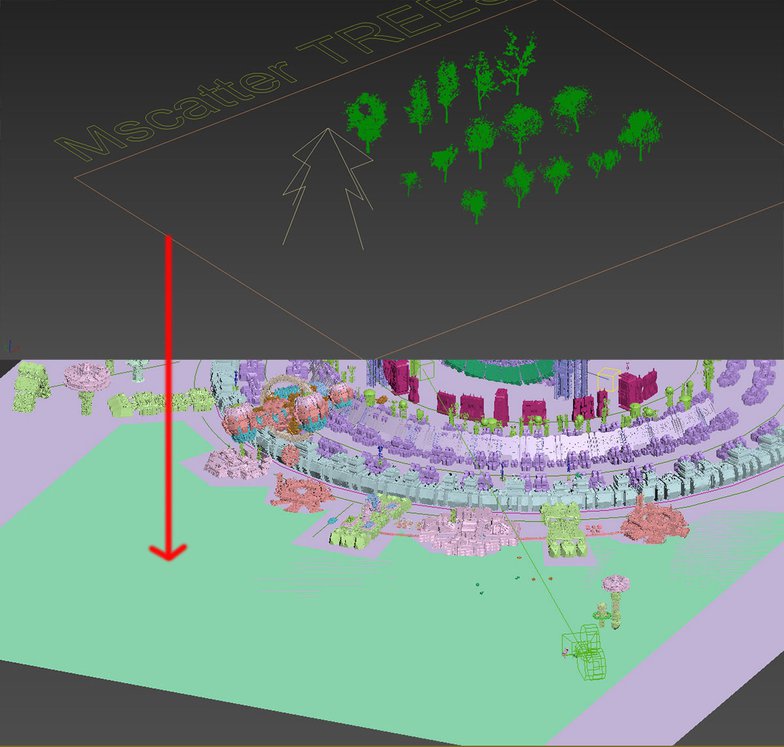 I created 6 metal shaders with slightly different diffuse maps, and with different id channels to each one. All the geometry had a box or planar mapping of very easy use. Later, I just added a multichannel modifier to make variations of what shader would be applied to which element, to give some randomness to the walls. This worked as planned, giving it some random diffuse maps and variation to the geo textures. In post, I would add more logos and details wherever I wanted later. 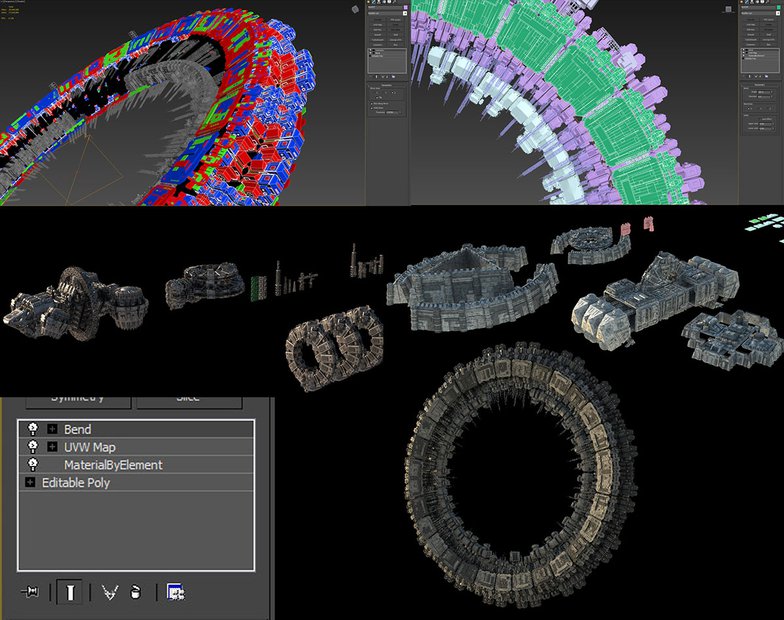 V-Ray was used for this image in a very simple lighting setup: just one Vraysun and a Vraysky. Also, I turned off the second bounce of the GI, so I have darker corners. I just had to emulate the background picture I was using, so I did this by positioning the sun against the image of the background as a base. I sent several renders to see how the light reacted with a grey override material. You can see the parameters I used for the full rendering size, and also the V-Ray elements created. You can see I used several Multi-matte elements, with the idea of adding a lot of smokes on the rings. I needed to have enough clean masks to work with. 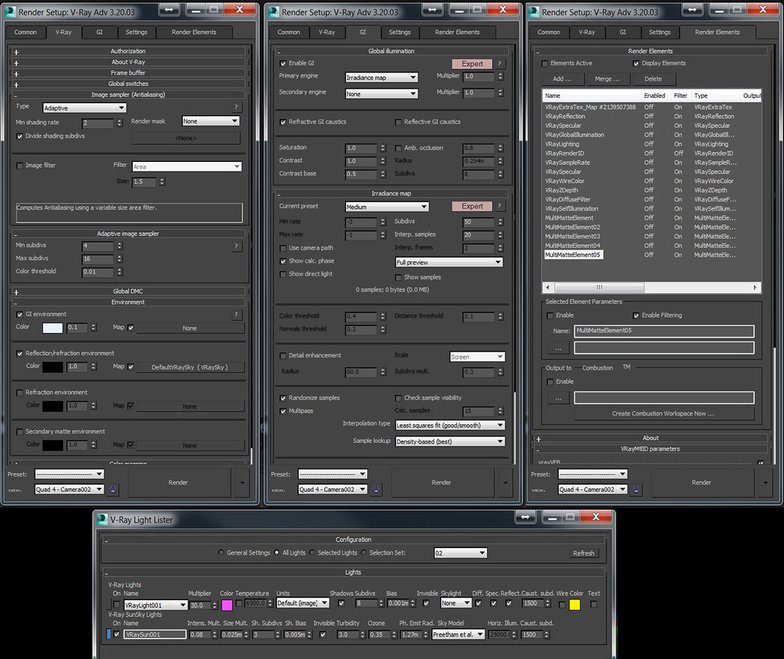 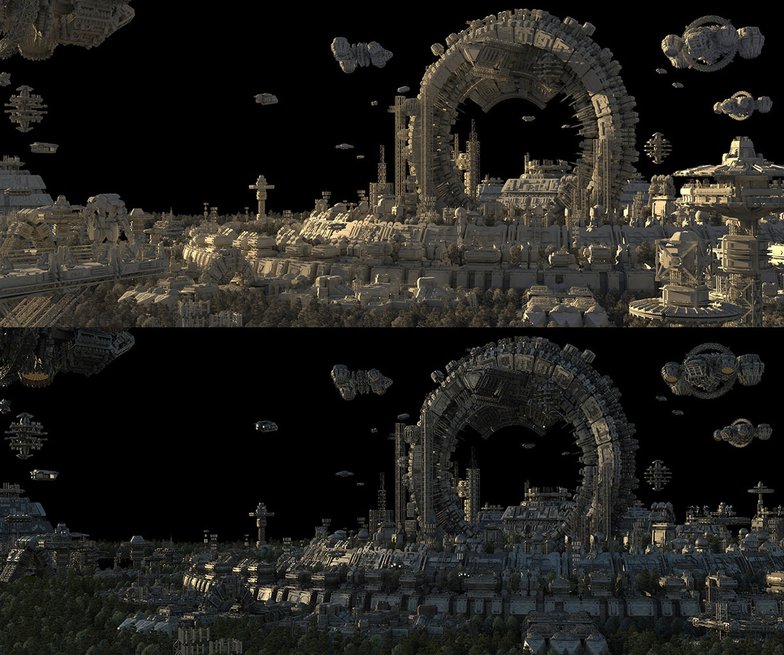 With this as a starting point, I started to assemble the Photoshop file. From the beginning I knew it would be a large one, so I did my best to keep it organized in groups, colors, and more. Here you can see my organization layers. Mostly the basic setup was the background, the render, the FX, and the final color corrections. Of course, as I added more details in texture here and there, the PSD file became more complex.

It’s good practice to keep disciplined and name and group the layers as you go, using no destructive adjustments, colors to categorize, and so on. After searching logo textures from the internet, I downloaded some that were free. Later, I cleaned them and put them where I thought they would look good to break a little bit the repetition. Then I put the layers on screen mode and then added some masks of dirt for noise and damage. The same with some smoke PNG files downloaded from a video – I took some frames of it and put them where I thought they would add depth to the image.

The portal lighting effect was a space image with the hues tweaked to make it look purple. I also rendered some ropes and rendereable splines for the lower part of the sci-fi balcony. These are roughly the main steps I took to create this image. I hope this inspires you to create more pieces for your own portfolio, and share them with the community. Thanks for reading and have a great day. 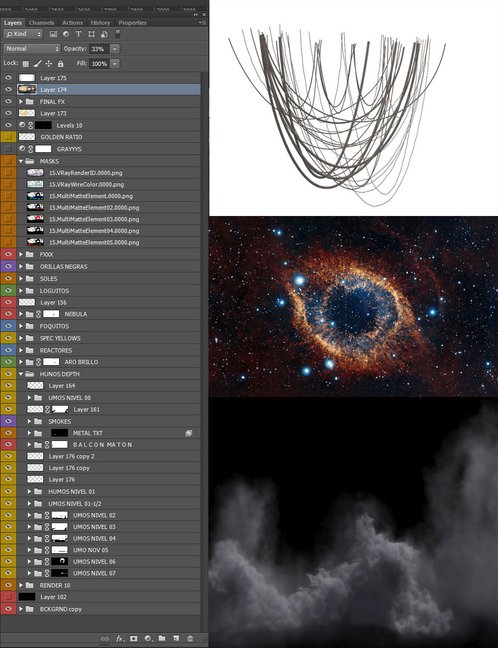