Model & texture lava on a burning character in ZBrush

Character artist Anda Deng takes us through the process for modeling the arm and face of his “Burning Desire” male character, and then the dripping lava, using ZBrush, Maya, Marmoset, and Substance Painter…

For this tutorial, I will explain how I approached creating his face, arm, and lava from the aspect of modeling and texturing. Then I will provide some top tips for being a better artist from my experience 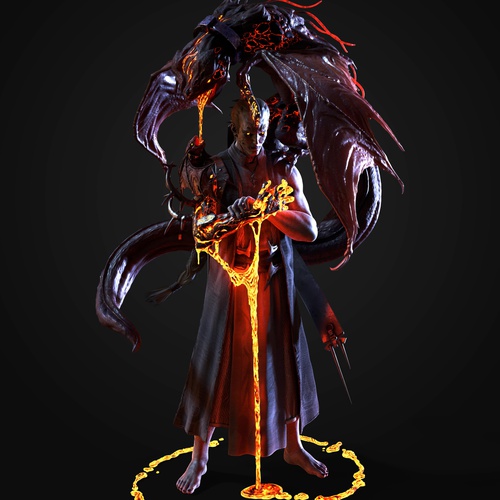 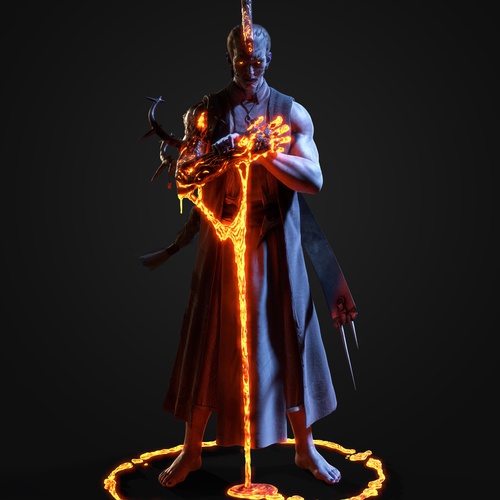 Making the head was very fun and also very challenging. I looked for a ton of references but eventually narrowed them down to just a few. When doing some 3D concept pieces, it’s always good to keep some basic principles in mind. You can try to Google “art principles” and you will see something like “balance,” “contrast,” “rhythm,” and so on. It’s basically to give primary, secondary, and tertiary forms to the design. I always use the rule “Thick Thin Dense Loose” to design my work.

Just a great tip for you that for any game asset, there need to have a lot more colors than what you actually see. One of the great examples is Kratos in “God of War 4.” If you get very close to see his face in game, you see a ton of color variants. However all these colors put together just make things look a lot better in the game engine.

Making the arm was the most interesting part of this entire artwork. My idea was to make the arm look like something that’s powerful and strong. I tried to make the arm model a hard shape and then applied some concrete alphas to break up the form. Modeling the lava was also a very straightforward process, but I always try to maintain the “Thick Thin Dense Loose” rule so that it would visually look better.

When it comes to making any textures, one crucial point is to make sure people can tell where the primary, secondary, and tertiary structures are. In other words, we need to make textures layer by layer instead of making everything evenly distributed.

I knew that a real-time renderer like Marmoset isn’t a good pick for something like lava that needs high fidelity in order to achieve its realism. In order to replicate the feeling of lava, instead of making it look like honey, I tried to do as much as I could on the texturing side and then bumped up the heat value to very high in Marmoset 4.

We know that we need to find references before we start making anything. However, it’s always a good habit to find random references everyday to keep yourself inspired and hungry.

You need to consider yourself as an artist instead of a tool user. Tool users follow workflows step by step, while artists create art by trying out all things.

Keep in mind that warm colors highlight things while cool colors make things appear less important. Trying to give more contrast between warm and cools may make your art stand out a lot more.