Most of my influences come from the 80s and maybe early 90s, often mixed with horror. So here I wanted to explore everyone’s (at one time or another) favorite cartoon; The Simpsons, and mix it with a kind of gritty 80s vibe. Actually, this is the second Simpsons horror piece I’ve done and you can check out the other one, featuring the Kwik-e-Mart in my portfolio (I also did a quick animation for it too).

So we’re looking at lots of 80s horror tropes like back-lit fog, rim light, more fog, zombies, and a grainy look, alongside mid-century architecture. Perfect. We’re going to start by jumping straight into 3D because in this instance, I knew I was going to use Moe’s Tavern as a location and it needed to be built. If you pretty much know exactly what’s going to be in the scene, it can allow you to forego the thumbnail process and just start modeling. You can then play with all kinds of camera angles and lenses and lighting scenarios which gives way more fidelity than thumbnailing, especially when defined and recognizable architecture is going to be in the scene. Let’s get started!

Obviously I needed to remind myself what Moe’s tavern looked like, so my research began there. I also wanted to see if there was any existing Simpsons zombie art available to see if that would generate some ideas. I actually found some kind of publications (comic?) titled Treehouse of Horror which had fairly well rendered illustrations on the cover. I’m not even sure if I gained much from collecting those but sometimes you’ll browse through your reference files and a tiny piece of one image will give you what you need, or maybe just the overall collection will instill something in your subconscious. I personally use Pure Ref to collect my reference so I can see it all in one place and zoom in to things, rearrange images into subject areas. It’s very efficient versus using a Windows folder and it’s free to use!

As an additional point, the research usually continues throughout the production process. As I started to block in the scene I realized that I had to research the whole street where Moe’s Tavern sits. But all the reference images looked too simplified/cartoony. To make it look realistic I had to research real places using Google street view. 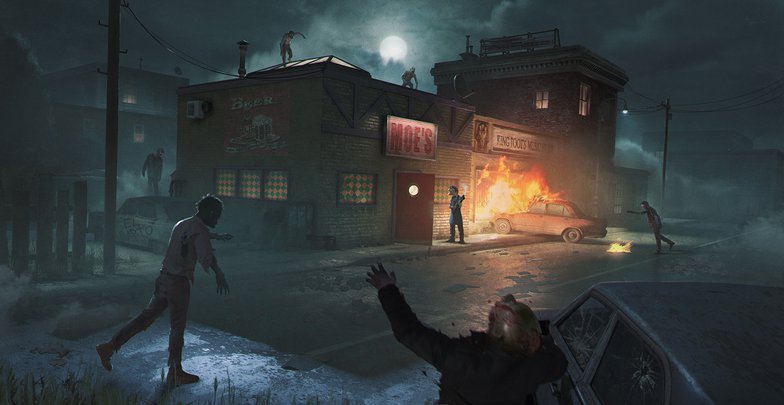 Surround yourself with relevant reference. You don’t have to use it all, but try to sort it efficiently so you’re not getting lost in it

So this is the first render I made after throwing in a few basic shapes and lighting it. Using the reference I tried to closely eyeball the size and shape of the buildings on that particular road as shown in various stills from the cartoon and maybe video games. Scale is one of the first things to get right so I always put a little dude in there. I always name him ‘dude’ and he’s about 6 feet tall.

At first I thought I’d just model Moe’s and go from there, but really you want to block in the rough geometry and start to quickly find a camera angle. Then you’ll know what to build and what to leave out. You never know, you could make a building in full 360 and only see two sides of it! 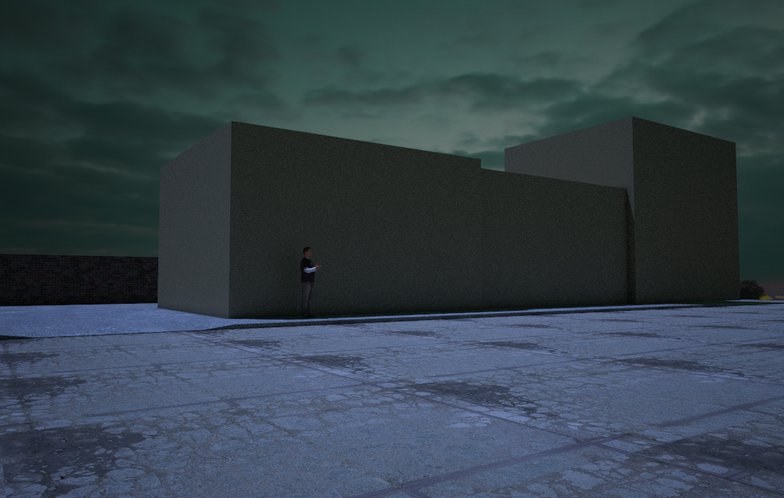 Now I’m starting to go between blocking in and checking angles, maybe adjusting some light here and there. It’s a slight juggling act to figure out what to build and what angle seems to work. Here I notice that the main block of buildings could stand out as a nice silhouette. I turn on the V-Ray Environment Fog now to also get an idea for atmosphere as that will affect the overall read. 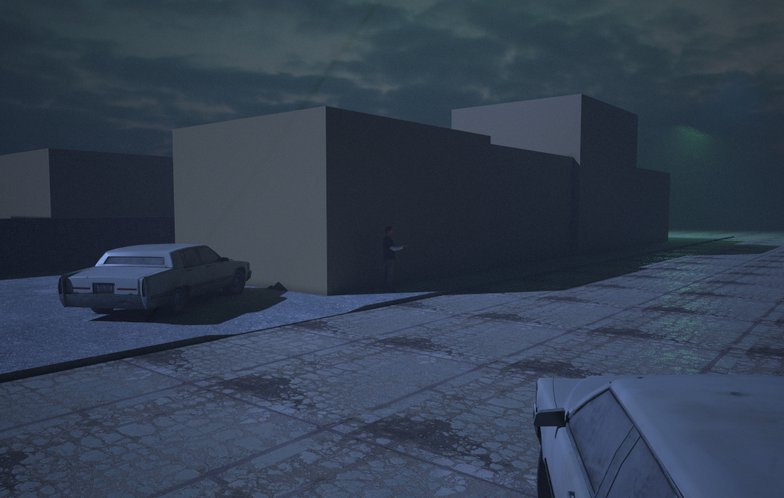 Starting to find the camera angle

Nailing down the read

So there are two very important elements that sort of overlap, and that’s composition and ‘read’ or readability. They’re both elusive and abstract and mastering them can drive you to madness as changing one little thing can influence the rest of the piece. Sometimes you make a change and can’t tell if it’s made things better or worse. I would say that composition is the harmonious flow of elements in the scene, and readability is how simple and comfortable an image looks either upon first glance, or in thumbnail form. That’s a bible’s worth of lectures and theory in two sentences!

Here I’m starting to lean towards the focal point being in the middle of the scene (where the ‘dude’ is), with lines pointing to it (e.g. the cars/characters) but the main silhouette being those four or five buildings. With that in mind I decided to back-light the buildings with a view to silhouetting the hell out of them with atmosphere. 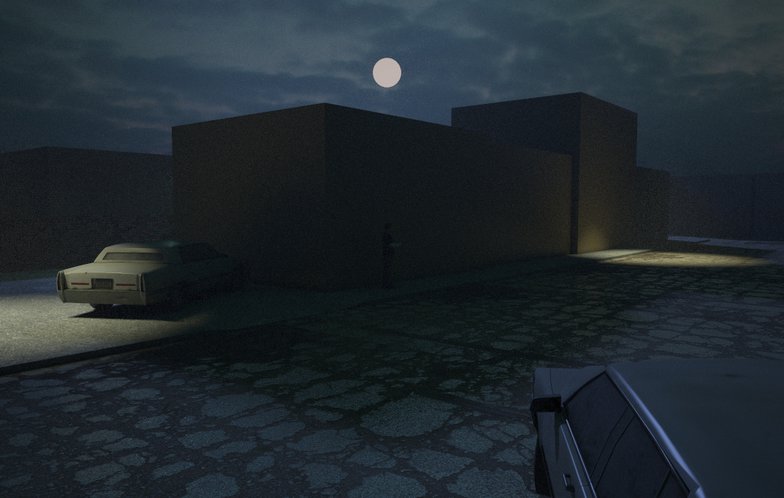 Getting on with the building

And so now we can relax pretty much. We’ve got the overall composition and read set up and now it’s about spending a good while cutting polys in the 3D software of your choice. It’s also about set dressing, so trying to go through your model library and through online download sites and filling up as many spots with free or cheap assets (unless your goal is to be a professional 3D modeler, in which case take the time to make your own and build your own kitbash library). I’m a concept artist so try to spend as little time modeling generic items as possible. I only model when something unique is needed. Also notice in this shot that I adjusted the aspect ratio to make it feel a little more cinematic. 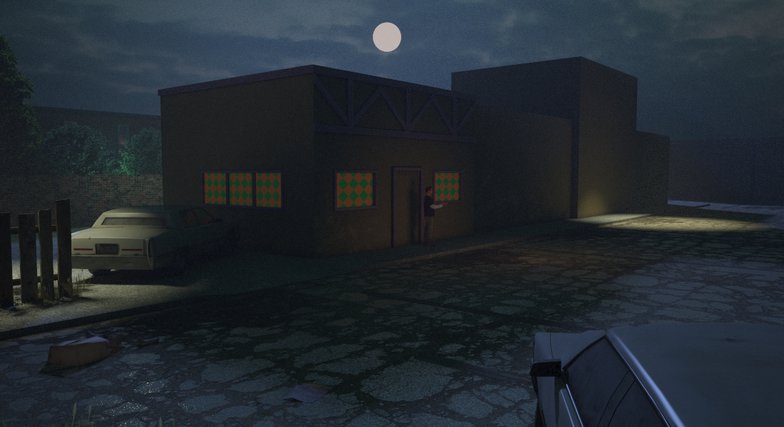 With much of the composition taken care of, we can put on some music and start modeling away

How far to go in 3D is always a struggle. Will we texture everything in Photoshop? Will we need to model every little detail in 3D? It’s a tough call and I’m never 100% confident where to draw the line. For this image, I took some inspiration from the artist Max Bedulenko who creates extremely detailed 3D sci-fi cities that are full 3D, and yet don’t quite look 3D. Having downloaded one of his PSDs recently via his Artstation store, I saw that he basically models everything, but then painstakingly paints over it all to make it look, not painterly as such, but just not quite so 3D. With that in mind I gave myself permission to add a few proper texture maps with reflection maps. I can over detail here but then lose the detail later with paint and atmosphere. You’ll notice the brick work stands out as an example of this. I downloaded a brick texture from textures.com and, as I tend to do with most of my reflection maps, increased the contrast to quite a high degree. 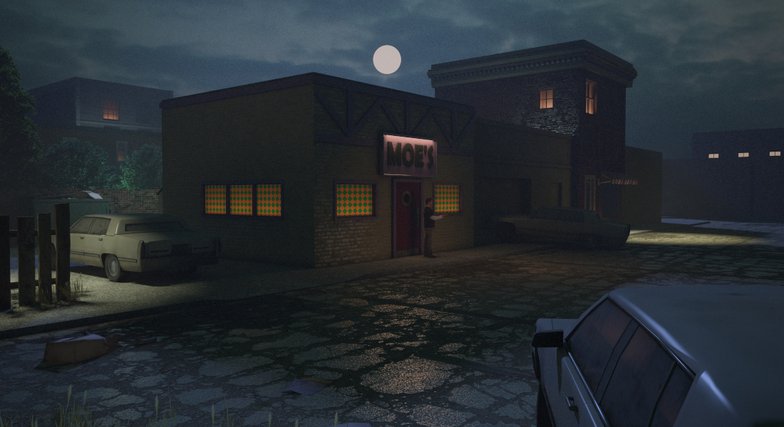 Figuring out how far to go in 3D

Getting some extra realism into the world

Just before this stage I was starting to look at the scene and felt uneasy at how ‘3D’ it felt. Like a really blocky 3D scene. I mean, Moe’s tavern, along with any building in the Simpson’s world is very basic and boxy. So I dug around in Google images and found that there was a bar in (I think) Texas that was made up to resemble Moe’s. It was likely a late 20th century building and had about half a century of wear and pipes/cables and dirt around it. So I took some queues from that bar (while taking screenshots in Google street view) and noticed all the tiny things I could dress up the scene with. Almost all of it could be downloaded via free download sites, my favorite of which is Sketchfab. So I added chimneys, air conditioners, better cars, a dumpster, pipes, garbage, you name it.

Compositionally speaking, at this stage I added a car going into the window of King Toot’s Music Store along with a strong light source there which would represent the light from a fire (which I’d add later on in post). This will help emphasize the focal point of Moe. 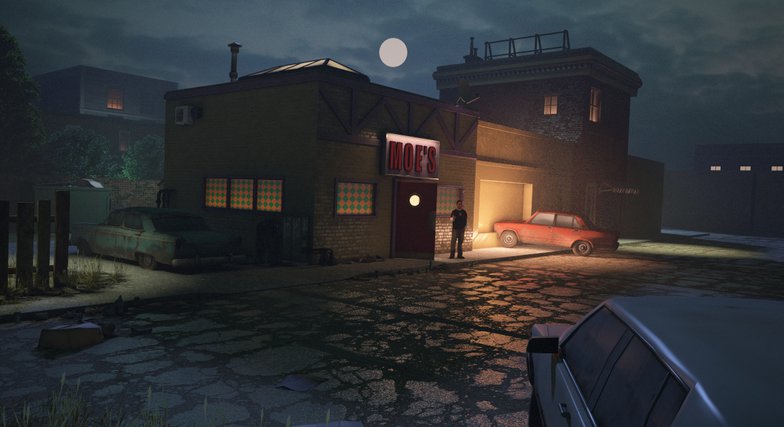 Now we’re at the final stages of 3D. For me, the biggest challenge of any scene is adding characters. If the scene is realistic, the characters have to be as realistic as you know how to make them. Ideally they’d be photos, but let’s face it, who can ever find the exact photo? So my technique is to bash whatever elements I can together out of 3D and pieces of photos. More on that later.

For now, I went into 3D-Coat as well as Daz Studio to set up some very basic poses with a view to using them as a somewhat rough guide to be photo-bashed over later. In 3D-Coat, I just used their default mannequin which is actually fairly easy to pose, especially for stiff-looking zombies.

Compositionally, note that they all point towards Moes, this adds a sense of danger and drama, but also pulls our attention to the focal point. 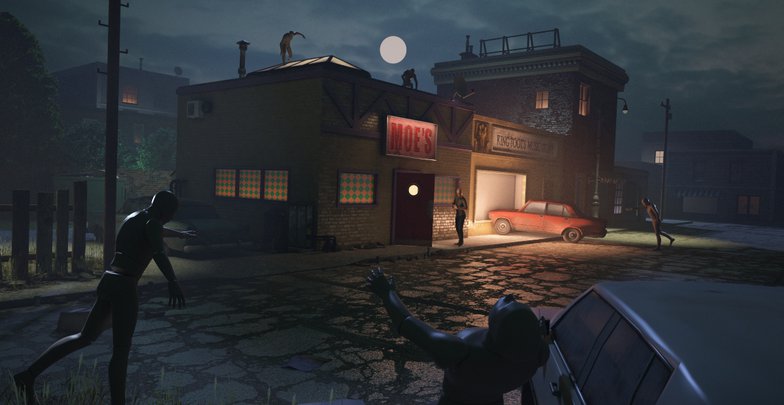 The addition of characters to finish off the composition

In an image like this with lots of layers, it’s very helpful to organize how the 3D components get out of the 3D software and into Photoshop. Sometimes I will render with fog turned on, but there are two downsides to this: firstly, you can lose control over the value structure. Often the fog will brighten up the sky and if you decided to turn the sky darker, you’re then burdened with darkening every other layer of buildings. Secondly, it just takes a ton of time if you’re using V-Ray. I want to render at 6k and with fog turned on, to get a clean render, would take 16 hours or more. So I decided to be brave and just manipulate the atmosphere in post. It’s actually not that difficult to do and gives you more control.

If you look at the image, I’ve shown all the different parts of the render that I outputted. You’ll also notice the object ID aka puzzle mat aka clown pass images which is super useful to wand-select objects once inside Photoshop. Okay, with all that done, the next step is to bring it all to life in Photoshop! 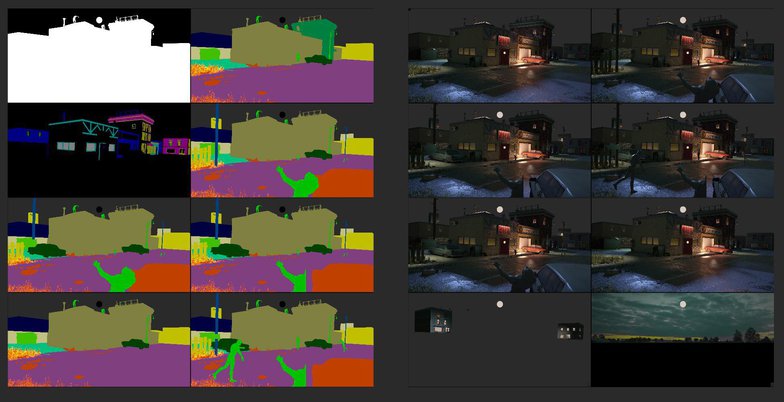 Getting all the right elements rendered will save you time later