Andy Walsh takes us through the modeling and painting process for creating a chilly scene from “A Christmas Carol” using 3ds Max, Photoshop, V-Ray, and DAZ 3D. In part three, use Daz 3D to create the Scrooge character, and paintover the 3D base in Photoshop…

Now we’re into the final phase of the project. This is where the piece can really come to life. Once again, we need to keep referring back to our initial goals and make sure we’re staying on course. The main hurdles are largely out of the way, with the exception of detailing out Scrooge himself, so for the most part we can relax and enjoy watching it come together.

I rendered the final image at 4,500 pixels. I had originally wanted to go to 6k but because of the displacement, and because my scene wasn’t 100% set up to render efficiently, it caused my whole PC to crash. Also the fog would really cane the render time so I had to scale back. I turned off the displacement and left it to render for about 15 hours. I then turned the displacement back on and rendered the snow in pieces. It’s really not necessary as snow can just be painted, but seeing as it was already in the scene and I liked it, I just wanted to let the 3D do all that for me. This is one of those many times where you have to make the call between 2D and 3D and it usually comes down to how long you have.

I also made sure to render out an object ID pass, as well as a materials ID pass, so I could select things more easily in Photoshop. Material IDs can be useful with glass for example. If you need to select window panes then you can just make all the glass in the scene have an ID and that’ll save you selecting each piece of glass later. I then bring all the renders into Photoshop and get my layers organized. I did not render a reflection pass or Z-depth, just the image itself to paint over. 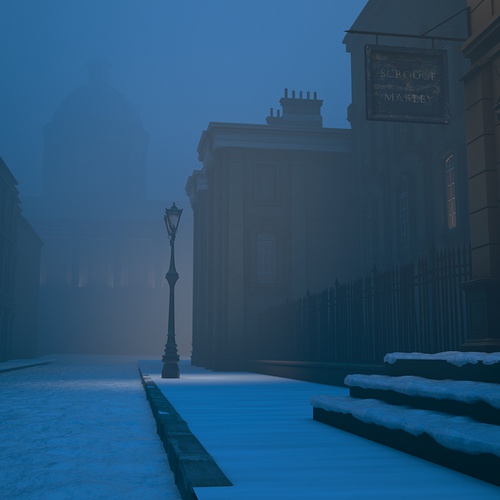 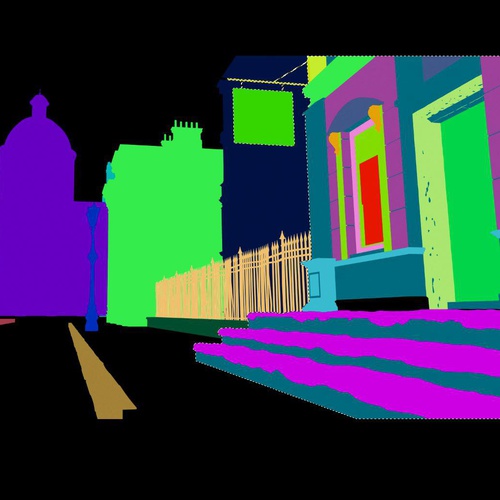 Preparing for the 2D workflow

If you look at the previous image showing the ID render pass you’ll see that I have used those IDs to select everything in the foreground building. After that I filled the selection with anything just so I had a mask for that entire building. I then inverted the selection and painted in some extra atmosphere behind it which I set to screen in layer blending mode. As you can see, given that I really wanted a strong foreground read, this helps a lot. I also started to paint out/blur/smudge some of the edges in the overall image. You want to get rid of the 3D-looking parts where possible, which is essentially any edges that are too fake-looking. 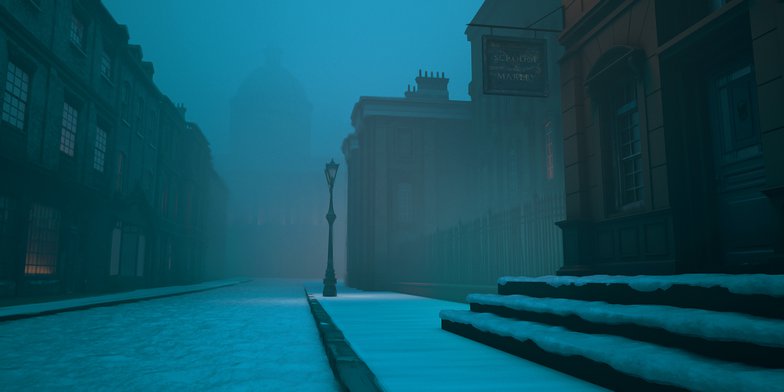 Making the foreground pop even more

This is probably the most fun part of the painting. You can’t go too wrong with snow, just put it where you like it. I used a solid opaque brush which was like a rounded-edge square and I would often lasso areas to give a flat bottom and use it as a ledge to dump my snow over. This stage really brought the painting to life and brought it out of the pure 3D realm. Once I made the blue-ish snow I put another layer on top, clipped to it, which was a Multiply layer. I then used a medium-blue soft brush to add shadow to the snow. This is a common procedure for me when doing snow. If it’s a day time scene I’ll add a second clipped layer for highlights. This can really create nice 3D painterly snow, especially if there’s a bit of noise to your brush. Okay, enough of the fun, back to work. 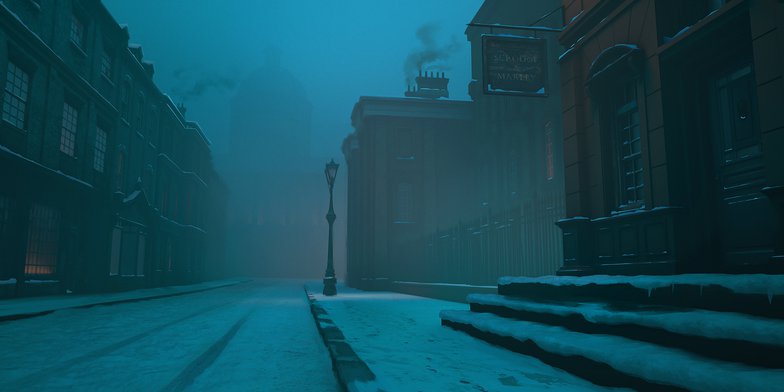 Just have fun with this stage!

This is a new process for me. As I’ve always struggled with characters, I used to say to myself, well, there’s going to be a dude there and so I’ll do what I know first i.e. the whole painting, and leave the dude until last. Well, I would get to the dude and find out that his placement disturbs the whole composition! So I advise to start early with your main reads and build around them, not vice versa! Daz Studio is great because it’s free and for cases like this, you can just use the stock Genesis models.

I just need a pose. I did actually try to paint him from scratch inside Photoshop but it was just a joke and with the environment being so clean, I couldn’t be careless with the main focal point now could I? He’s also walking down a step, so good luck drawing that realistically. Other options are to pose for it yourself in a photo and paint over that. Here you can see my posed Daz model inside Daz, and then how he looks on the actual steps in front of the building. 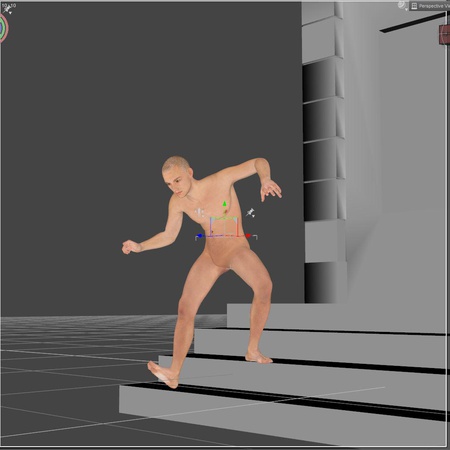 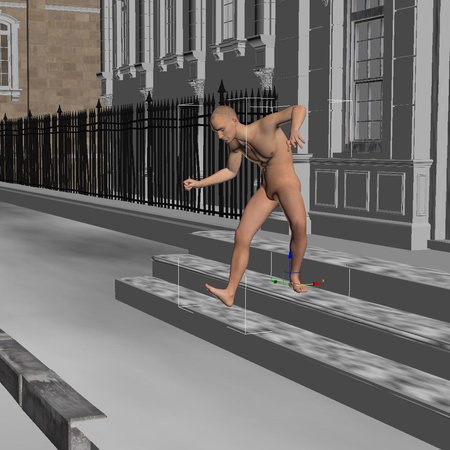 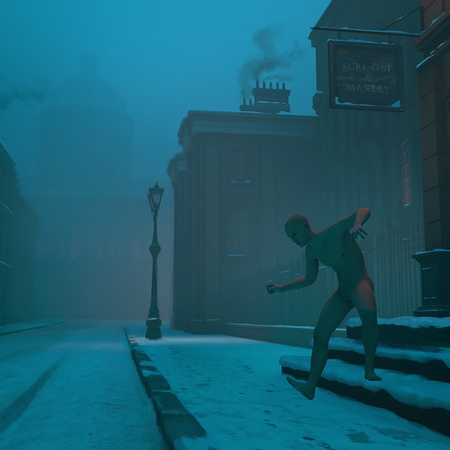 Next I started to draw over the character. I did a fair bit of research here but struck it lucky when searching for ‘scrooge’ in Google and I found a theatre production starring Tommy Steele where he looked quite a lot like what I had in mind. So I dragged images of him in costume into Photoshop and tried to mimic how he looked, including the fall of his scarf and gloves. So even though we’re hardly using the Daz model’s pixel information, we at least have perfect proportions and pose information, and those are the hardest things to do by hand. 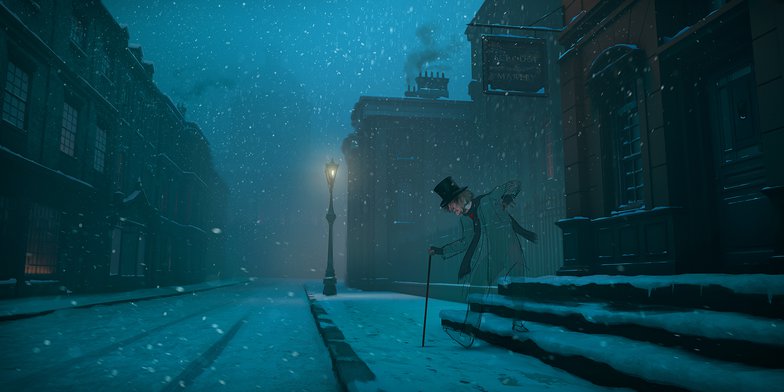 Use any means necessary to create your character

What’s great about this process is that you can Frankenstein parts of things together to make up a character. As long as you have a starting point it doesn’t quite matter how you achieve the final result. It’s all just pixels. For his sleeves I searched around for Victorian costume images or maybe old period photographs and copy and pasted a sleeve here, a pant-leg there, and then used the puppet warp to bend the arm or leg into place, then faded it right out so you can hardly see it. 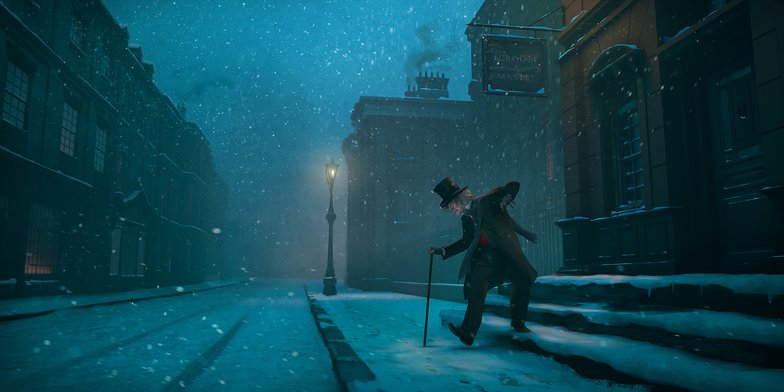 Breaking my own rules

So remember that part about focusing on your main reads as early as possible? Well at a certain stage during this painting, I thought, man, wouldn’t it be cool if there was some kind of pay off at the end of the street. What if there was a ghost? What if it was Jacob Marley’s ghost? And I started fussing and stressing over how that might look. Here’s my attempt, which never worked out. I kept looking at the image and feeling something I couldn’t put my finger on and, although I can’t say for 100-percent certainty, I think it’s because I was breaking my original rule of keeping a nice, simple read. If we put anything competitive in that space, it will confuse the viewer. And I just wanted to say that it’s this kind of decision making that has taken years for me to develop. I think once upon a time I’d release it with Marley in and call it done, but there’d be some nagging feeling in me. So keep it simple and don’t have more than one major read if you can help it or they will compete! 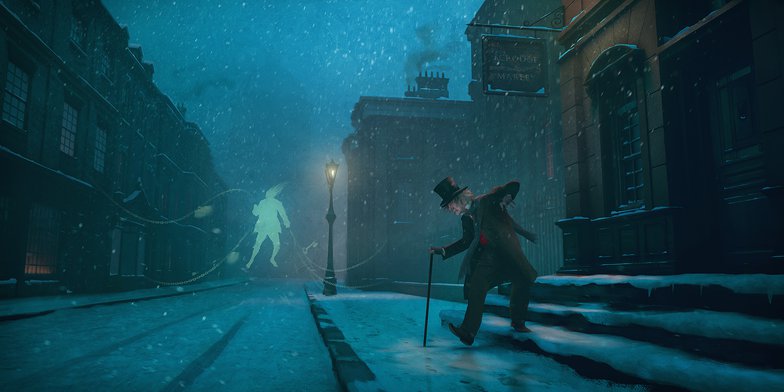 It’s so very subtle but bringing back the carriage and adding a little glowing clock face gives us a second and maybe third read, which our brain recognizes as hierarchically inferior to our main read and so allows us to go: one, two, three. Before, with the Marley idea we’d have gone: one-two-one-two-one-two until we were dizzy. This is a thing that has come up for me a few times, so take heed, lest the horrors of unbalanced compositions come to haunt you!

I’m very satisfied with the result of this painting. It’s a step forward for me in terms of learning to keep things simple and not let them get out of hand. Remember to plan from the start and try to stick to it unless you can improve upon it. It’s also nice to finally depict one of my favorite moments of one of my favorite stories of all time. Merry Christmas! 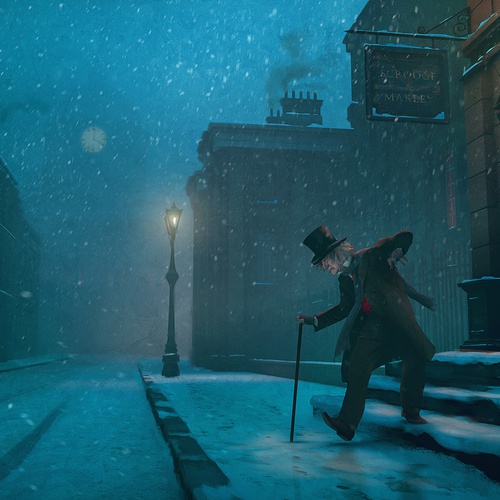 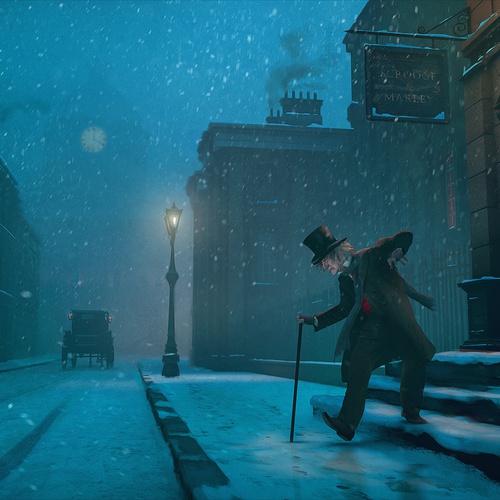 Now we have reached our goal! A simple read depicting a classic Christmas story moment