Andy Walsh takes us through the modeling and painting process for creating a chilly scene from “A Christmas Carol” using 3ds Max, Photoshop, V-Ray, and DAZ 3D. In part one, learn to thumbnail and study from references…

I’m a huge fan of the Victorian period. As someone who appreciates art and architecture, for me, this period was a perfect marriage between the two. As someone who also appreciates a darker and moodier flavor in their art, Dickens’ A Christmas Carol is pure artistic Nirvana for me. So every year I try to create that feeling in a Victorian-themed Christmas painting. When I was tasked to do this year’s Christmas painting as a tutorial for 3dtotal I decided to go straight to the source and depict Scrooge, in particular the scene in Stave One of A Christmas Carol that reads:

“It had not been light all day: and candles were flaring in the windows of the neighboring offices, like ruddy smears upon the palpable brown air. The fog came pouring in at every chink and keyhole, and was so dense without, that although the court was of the narrowest, the houses opposite were mere phantoms.”

Defining exactly what I want to create

It’s a good idea to have a reasonably solid goal in mind for a painting. Each step of the way you can be judging whether or not you’re staying true to that goal, or whether you’re wandering. It’s okay to wander, but you don’t want to make a habit of it because it’s a good idea, as an artist, to be able to make a decision about what you want to make, and then execute. Especially if you want to do work for clients. Once I decide roughly what I want to make, in this case depicting the scene from A Christmas Carol, I will almost always look for a few paintings from great artists, old/dead or young/alive, and use their work as inspiration to strive to make a painting that exceeds the quality of my current skill level.

I found two paintings, one by Raja Nandepu and one by Connor Sheehan. In the case of those two artists, they’re not the most famous artists in the world, but the two images I found were exactly the kind of clean and simple mood I wanted right from the get-go. And that was my mission – to create a very simple read with a muted palette. I often feel that my work gets a little complicated, and so this was my number one goal. Remember that because it comes up later. 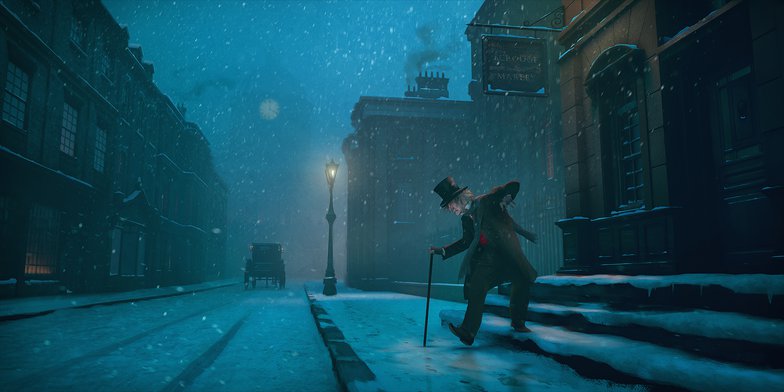 I pretty much knew I’d be using 3D for this piece so there’s something to be said for going straight in and getting your composition tests done within the software, but I thought I’d try sketching first to see what I could learn. The first thumbnail is often the worst as it’s the first roll of the dice, after which you can course-correct. As per my goal, I wanted a strong foreground read and then a foggy second read of the background. Nothing else. And I wanted to use that simplicity to get across the eerie stillness of the late afternoon/early evening setting. So I painted that, with Scrooge in the fore, and some large foreground buildings, letting everything else drop away. 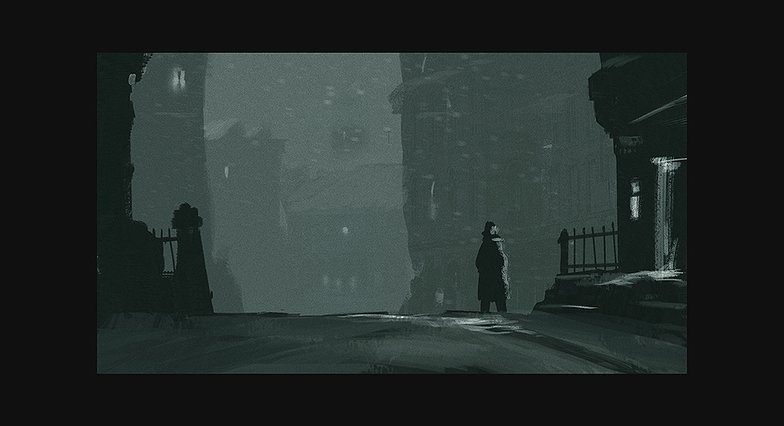 The first thumbnail is often the trickiest

The first thumbnail was a little too symmetrical and so I set about making this one with more of a large shape in the foreground. I used a big market stall to try this idea out. I wasn’t too happy with it though because I wanted there to be a real lack of life in the picture. I wanted Scrooge to feel alone on his walk home from the counting house. 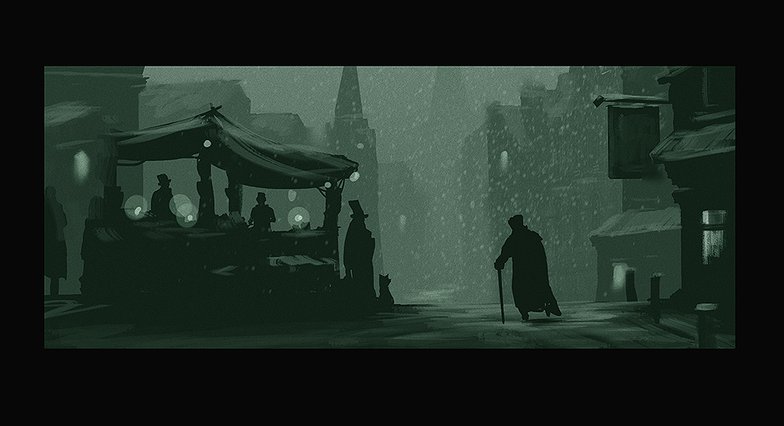 For this thumbnail I wanted the Scrooge and Marley building to be prominent in the foreground and for the street to fall linearly away from us into the fog. It’s just us and Scrooge against the bleak night. At this stage I felt I was getting a little closer compared to the other thumbnails. 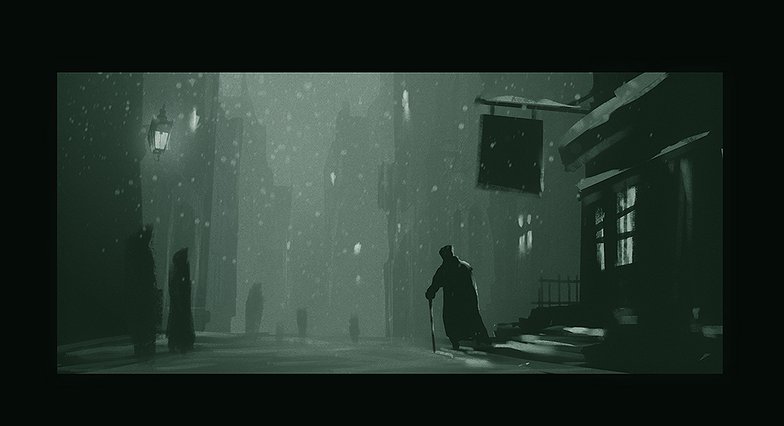 I wanted to get a little more intimacy here with Scrooge and his office right up close to us strongly in the foreground, and have the street be rolling away from us as though he’s on the top of a hill and we get to see the rooftops at eye-level. I wasn’t overly keen on this one as I was really missing the sense of towering lonely buildings. But hey, this is what the sketching process is about. We have to explore and find out what works. 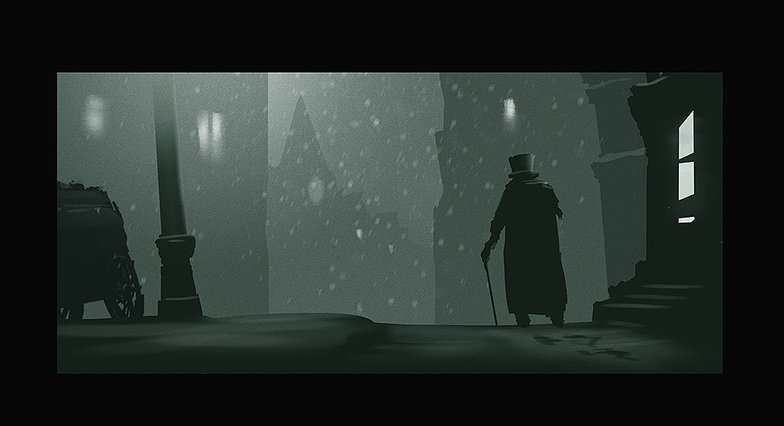 Where to go from here

At this stage I was now sure that I wanted to go the route of 3D. I knew it would cost me in time but I wasn’t setting out to make a timely piece here. This wasn’t going to be very client-friendly (no client wants to hear that it takes you a week to make a painting!) but here’s the other thing – in the next chapter I want to show you how it can be okay to take some extra time in 3D, because you can re-use the assets you made there for future work. More on that later.

It’s interesting to note that in the early stages of the 3D process I showed my wife what I had made to get some feedback. I find it’s good to show a non-artist your work because they can give you feedback on how the image is affecting them as a consumer of art versus showing your work to another artist who will often see things technically rather than emotionally. She noted that the sketches looked more exciting than the, admittedly early phase, 3D version. This put me in a bit of a pickle because I hated the idea that I may have picked the wrong path. But going back to what I said about making a very simple statement, I felt that the sketch style would be moving away from what I had in mind. I wanted a clean, almost solemn read. And I felt that 3D (plus a paint-over) would give me that, so I soldiered on.

Once I had a good idea of what needed to be created in 3D, I could start tailoring my research to those assets. Seeing as I have made a few Victorian pieces in my time, I have a good collection of images to choose from and don’t often have to look for much more in terms of photographs. The images included here are just a few from Google Street View and one picture I took myself from a town I lived in and grew up near called Chester. Google Street View is great because if you know which towns have a fairly good Victorian style (and most do if you know where to go) you can get some decent reference as long as you don’t mind some of the camera angles it gives.

I have street-view screenshots from Shrewsbury, Liverpool, Lincoln, Edinburgh, and various others. Other than that, I did want to see what London looked like in the Victorian era itself, so I did some digging to find some authentic period photos. And there’s a difference between looking up reference for a 3D modeling workflow versus a photo-bash workflow. The former is just for information to help you model, so it literally doesn’t matter where you get the images from or what size they are. In the latter, they’ll need to be of good quality and have roughly the right lighting, camera lens, and angle to match your scene’s lighting and perspective. 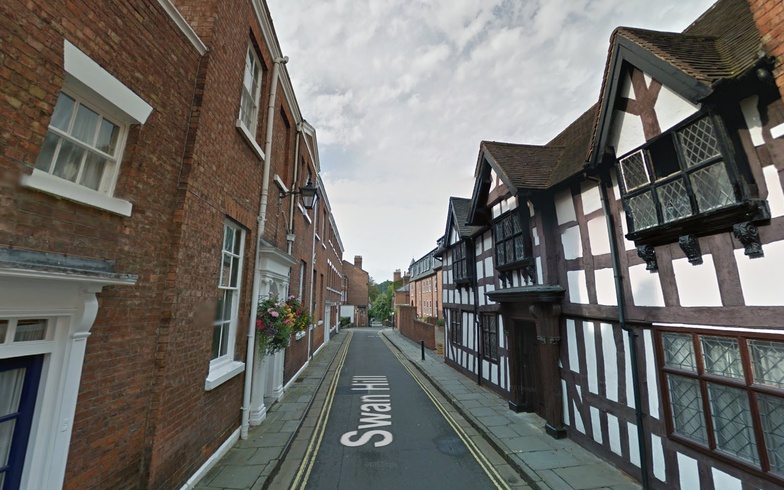 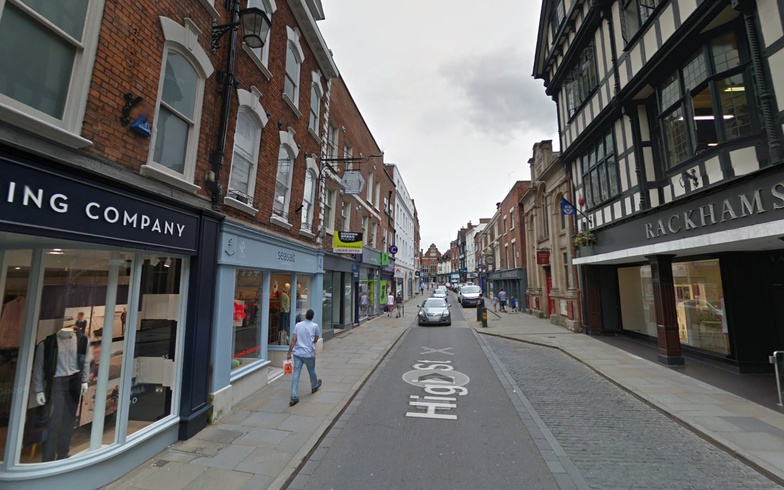 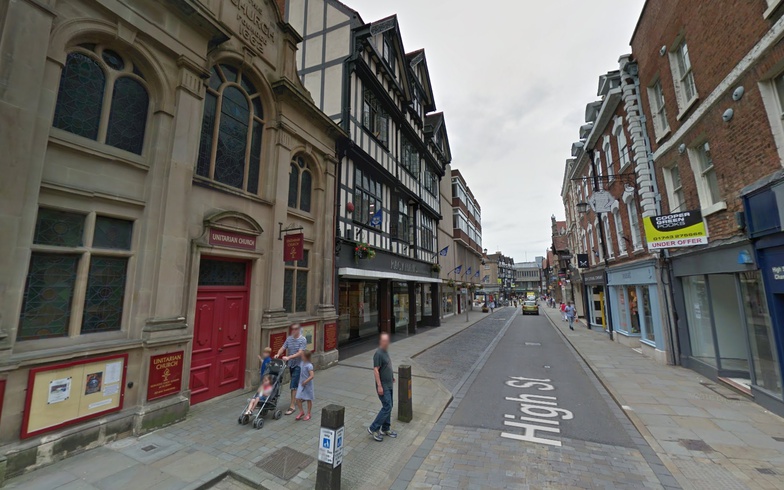 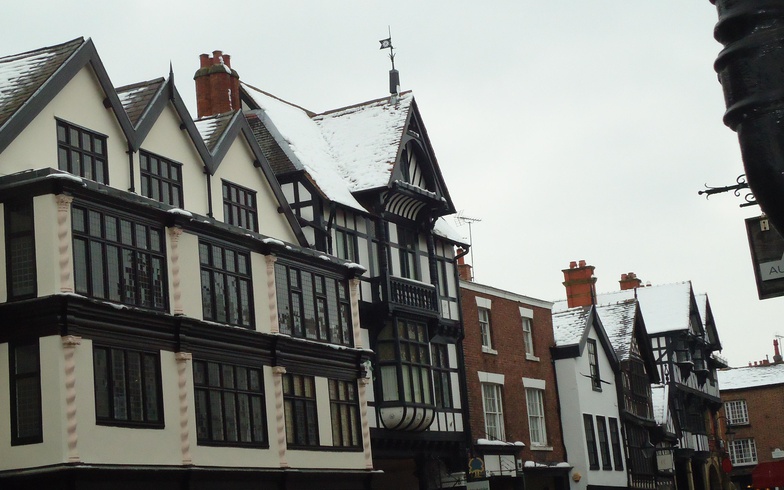 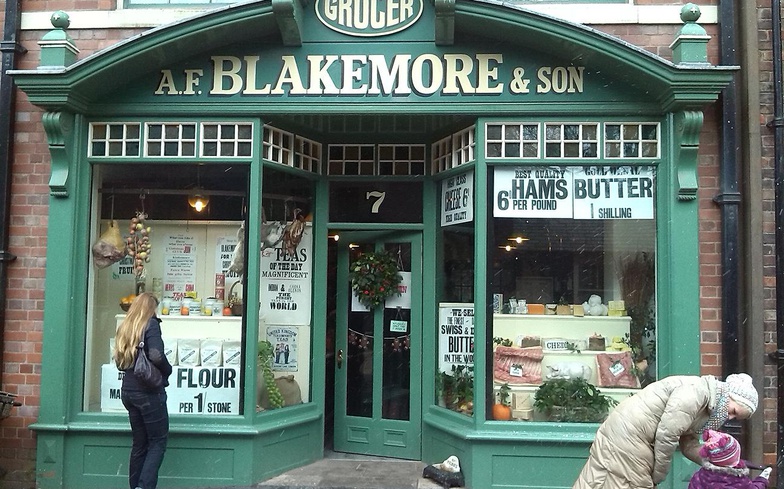 This step could be done either right before the 3D stage or during/after the very earliest stages of the 3D block in. Reason being that at some stage you will know exactly what needs to be detailed and at that stage you’ll want to further nail down your research. So initially it’s obvious that I’d want reference images of Victorian England, but once I knew the street layout I would need specific architectural elements to study, and one thing that came to mind was a game I played recently – Assassin’s Creed Syndicate.

It’s worth stating that studying a game isn’t quite as good as studying real life but so often, current Victorian-age buildings have been altered/updated (especially at the ground level) and it can be hard to find something truly Victorian. Also, while inside the game I could get up close and really look at the features of the buildings to get ideas. It’s not common to have a game with all the reference you need, but if you are making a period piece and there is a game that has recreated that time period in great detail, then it might be worth checking it out! 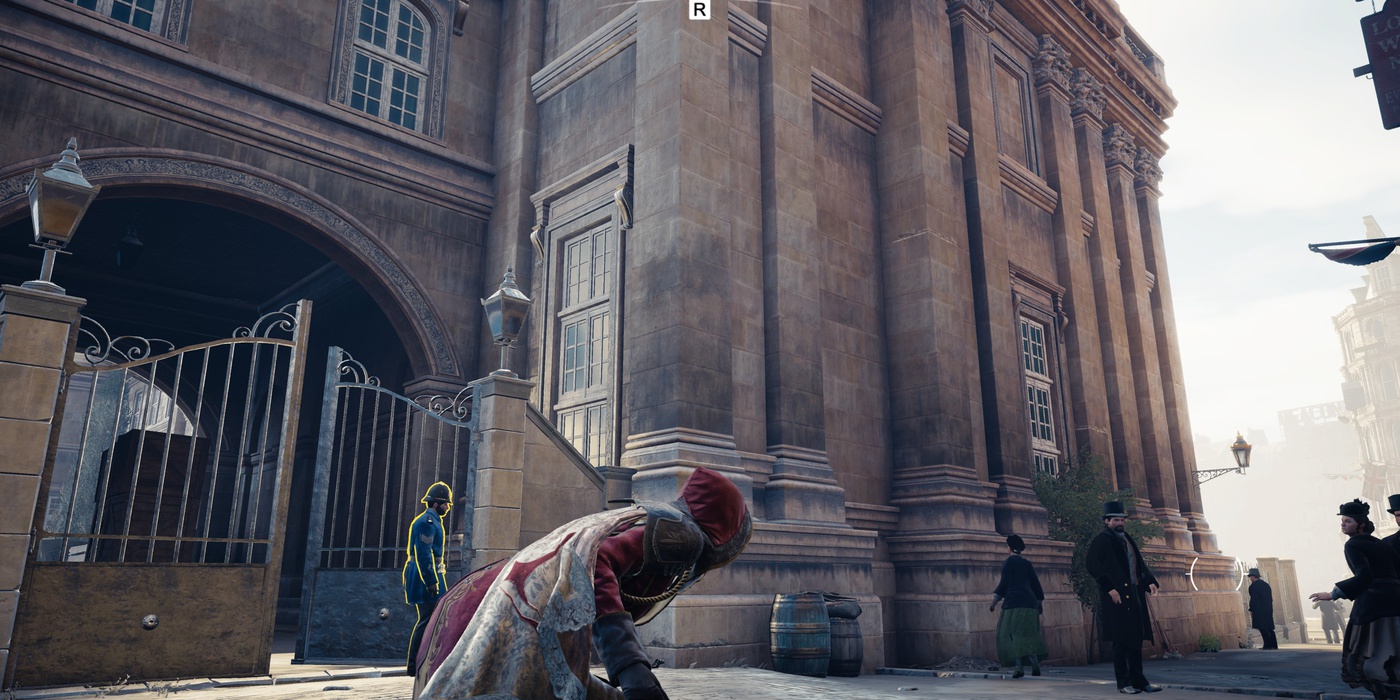 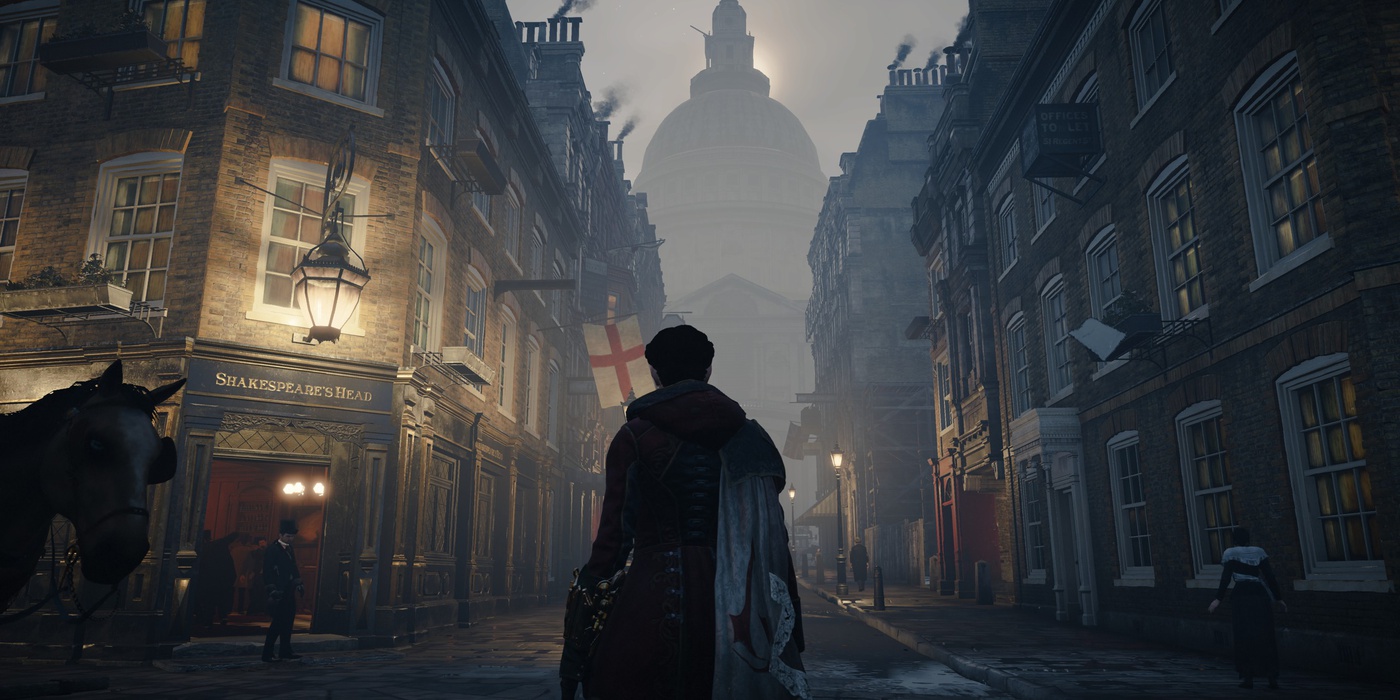