Helena Shin takes us through the Maya, Mari, Substance, and Marvelous Designer workflow behind her stunning redhead portrait “Emma, close your eyes”…

Hello everyone! I'm character artist, Helena Shin. In this tutorial we will look at the making of my latest creation work Emma, close your eyes. Starting from now, I'm going to take you through the character design, modeling, sculpting and texturing xyz, PBR texture, shading, and light. Okay, let's get started! 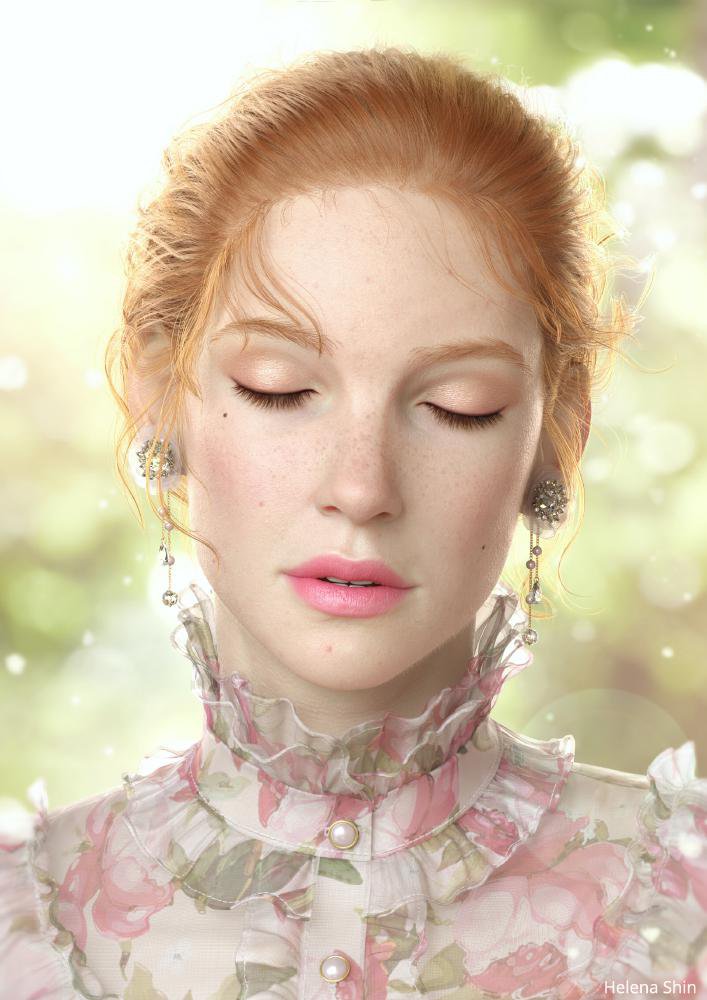 First of all, I mentioned in an artist interview with 3dtotal last year that "the mood of my next work will be like classical music or R&B." And a few months later I came up with the final image that I mentioned. I usually imagine the final image and then collect the reference pictures. First I thought of the final image that I wanted to create. After collecting a lot of photos, I choose only a few important ones. Then look at the selected photos and combine the parts which I like to design. 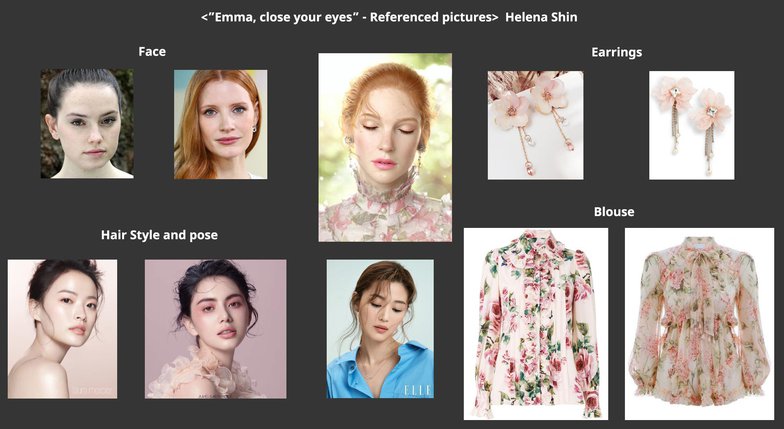 Emma's face and upper body were first created in Maya with a middle polygon. For the face, I modeled the skin flow of the symmetrical facial muscle. This is always very important and difficult for the modeler. This model was later exported to subdivision 2 from ZBrush for rendering after the sculpt.

Face and upper body were modeling in Maya

Base sculpting in ZBrush

First I did a very basic sculpting of this model in ZBrush, because Emma is in her 20s and has a soft-shaped face. And I usually don't use a special brush when I sculpt in ZBrush. My major brushes are Standard, Inflat, FormSoft, DamStandard, Move Topological, and the Move brush. And then I only set and sculpted the intensity, draw size, and focal shift options of the brush. 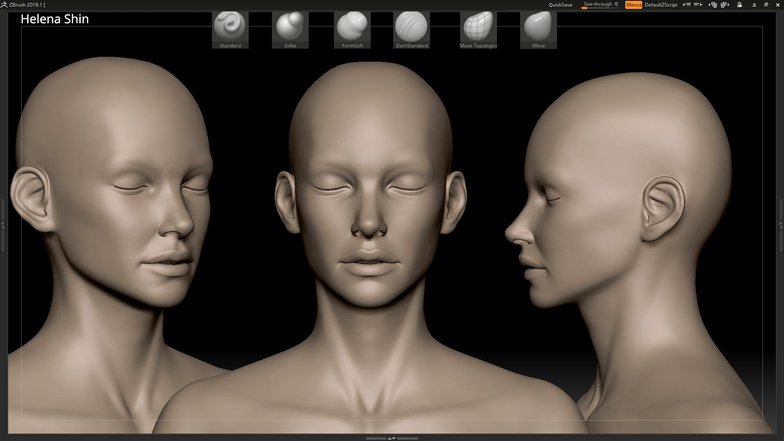 Sculpting and major brushes in ZBrush

I imported the sculpted high resolution mesh into Mari. For this face, I used the female 20s xyz map and combined the displace (secondary), tertiary, micro maps into the RGB channel in Photoshop before projecting in Mari. And after the projection was completed, the maps for each RGB channel were exported individually. 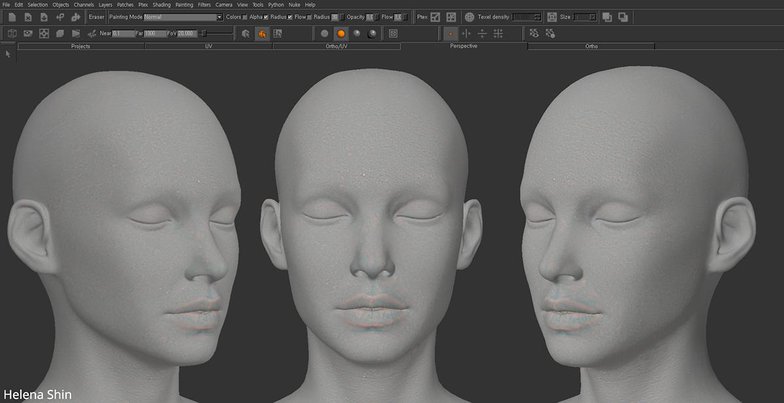 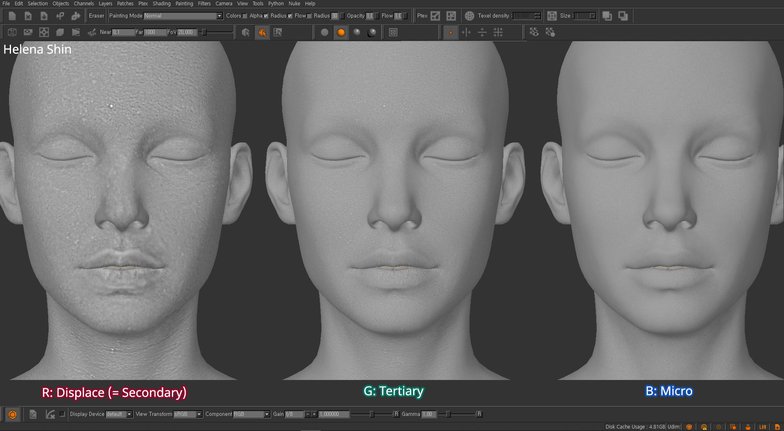 Apply the displacement maps in ZBrush

I imported the maps into alpha and applied DispMap in ZBrush. Also each of the displacement maps were applied on different layers, because it was able to control and adjust the intensity of each of the layers. After that, I created another layer to sculpt in some more details carefully, and I didn't sculpt too much. For the female skin case, it wasn't easy and it was difficult to control the maps and layers. The female has softer skin than the male. 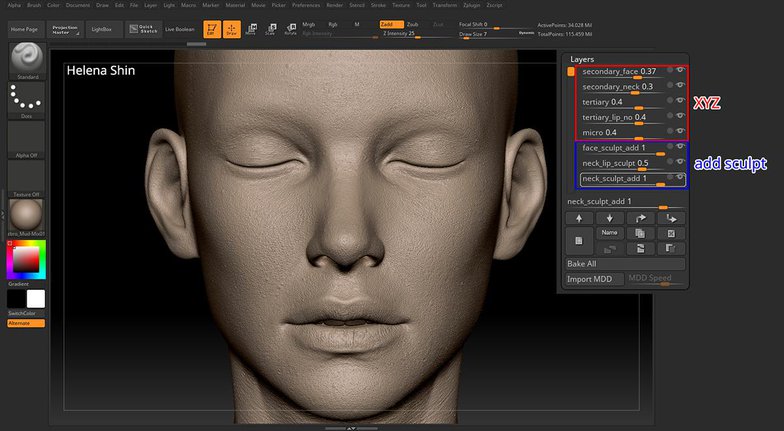 XYZ maps to apply displacement and layers in ZBrush 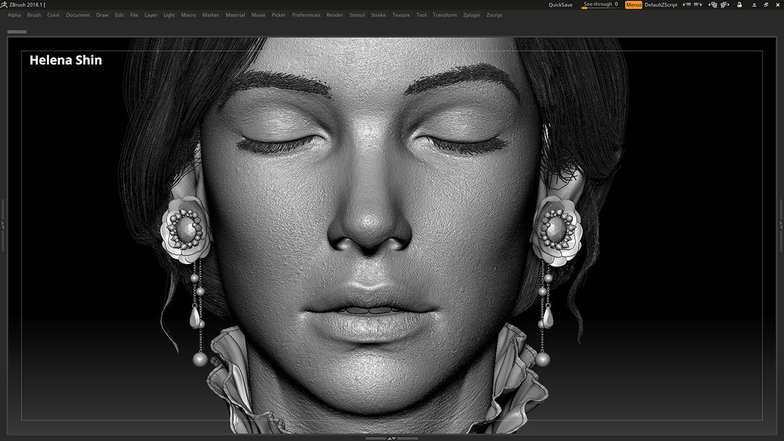 Applying the displacement maps in ZBrush

Emma's face was painted in Mari. I usually prefer to use Mari when I work on detail painting. Mari's best advantage is that it is compatible with Photoshop, and it can import and use the brushes of Photoshop from Mari. That's why I love it. To create PBR textures, each channel was created and worked with six PBR textures. These were Base Color, Subsurface Radius, Subsurface Weight, Metalness, Specular, and Roughness. In addition, most of the face was painted using Mari and later on, I worked on the details in Photoshop. 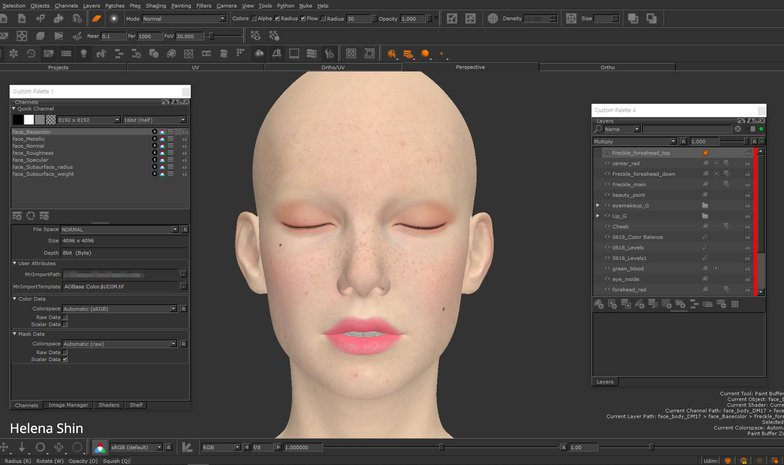 PBR channels and layers in Mari 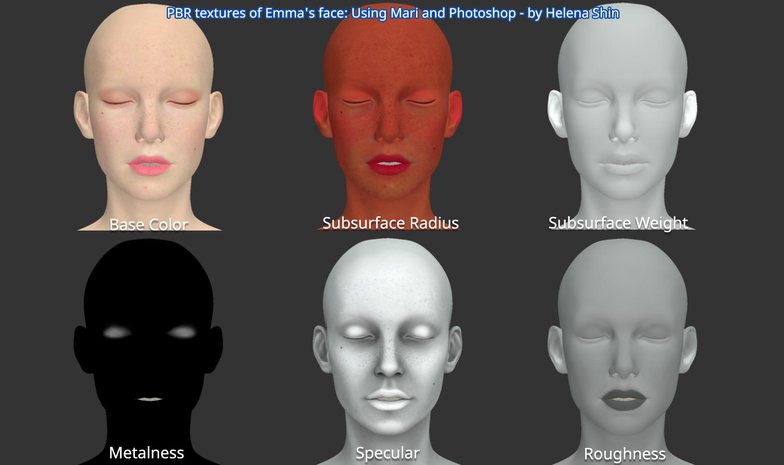 I used Arnold's Ai Shader in Maya to create a realistic skin look. I imported PBR textures and applied them on each of the nodes for Base Color, Subsurface Color, Metalness, Specular, Specular Roughness, Subsurface Weight, Subsurface Radius, and Displacement Shader. And I set Subsurface Scale to 0.1. You will need to adjust the subsurface scale depending on the size of the model. 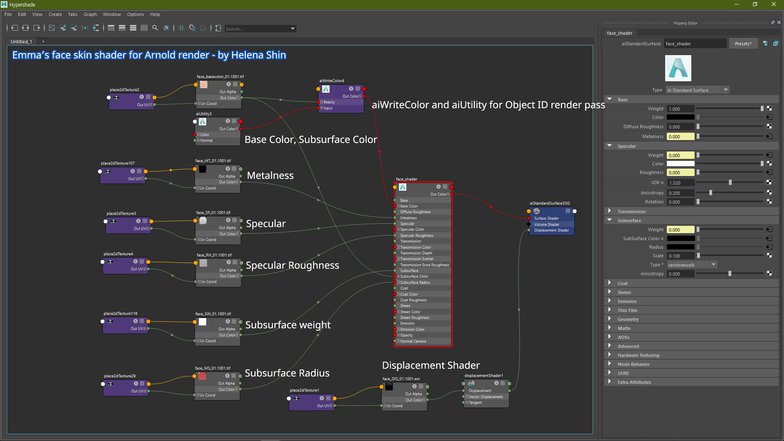 Modeling the blouse and corsage in Marvelous Designer 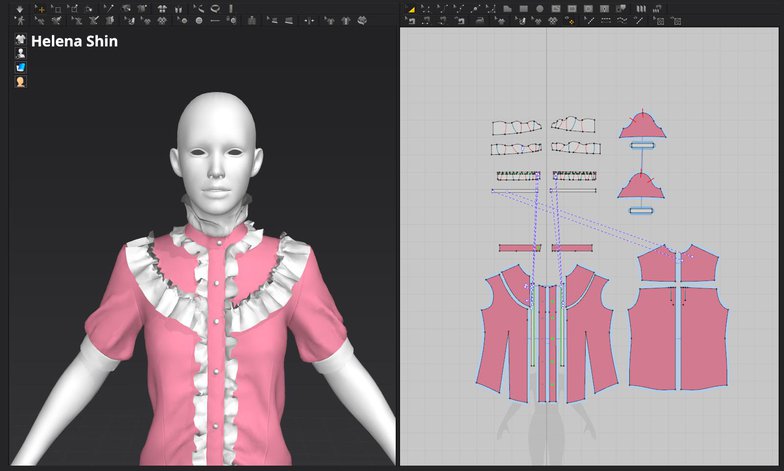 Modeling the blouse in Marvelous Designer 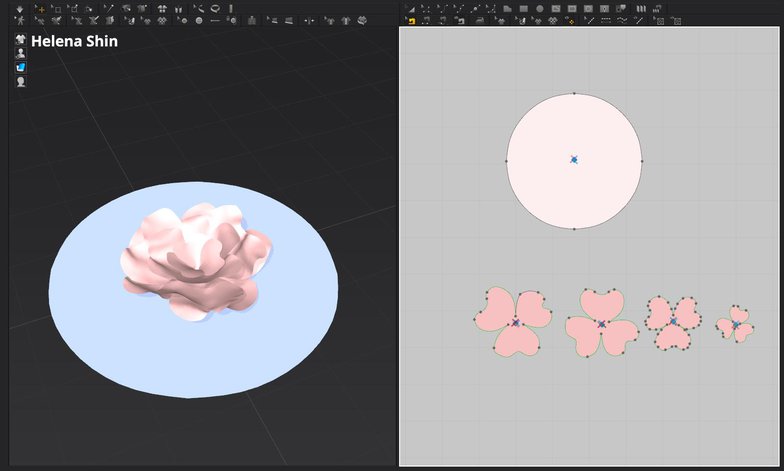 Modeling the corsage in Marvelous Designer

Sculpting a blouse and corsage in ZBrush

First I imported the blouse and corsage model into ZBrush created in Marvelous Designer. Topology using the flow of the cloth was done in Maya after applying to ZRemesher in ZBrush. Then I sculpted the wrinkles of cloth in detail with standard brush, and Dam Standard brush. And the earrings were created in Maya. And then, these models and the sculpted corsages were combined in ZBrush.

Sculpting a blouse and corsage in ZBrush

Upper body and earrings in ZBrush

I created the fabric material in Substance Designer using micro fabrics chiffon textures with displace, opacity, and normal maps for painting a blouse in Substance Painter. Especially, I worked on using Substance Designer for the first time because I was curious about it. After that, I imported the fabric material into Substance Painter then applied. I painted a base color for the blouse using a rose floral pattern. Also, I created specular, roughness, opacity, and normal as well. 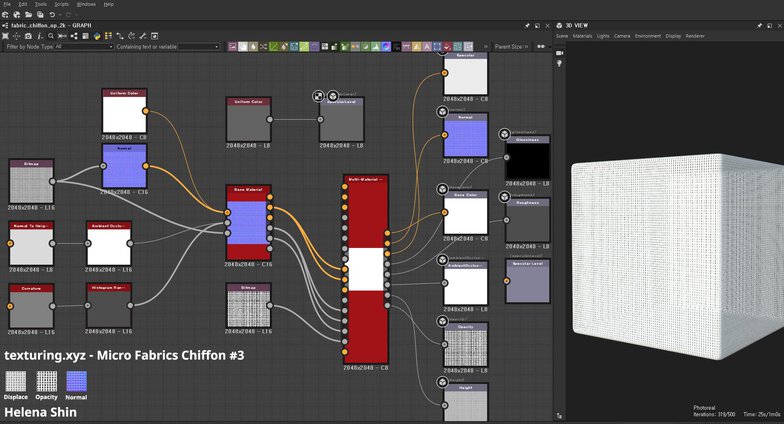 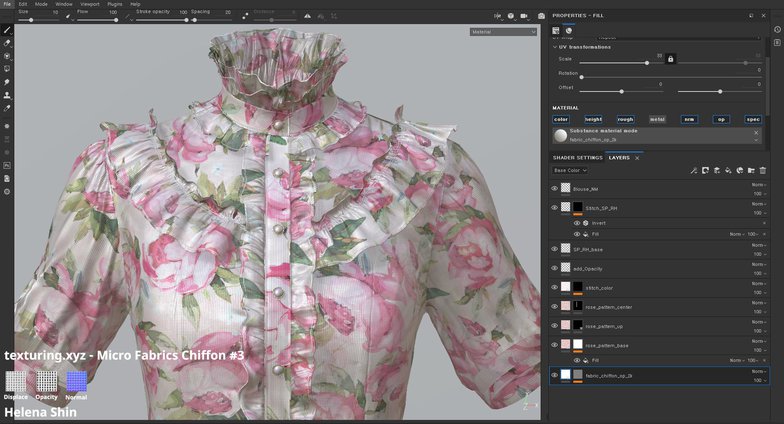 Texturing a blouse in Substance Painter

I imported the PBR textures of the chiffon blouse and applied them on the each of the nodes of Base Color, Specular, Specular Roughness, Transmission Weight, and Tangent Space Normals. Above all I used Transmission Weight map instead of Opacity map for the opaque soft texture of blouse. Also, I used a sheen layer which can be used to approximate microfiber, and cloth-like surfaces such as velvet and satin in varying roughness. 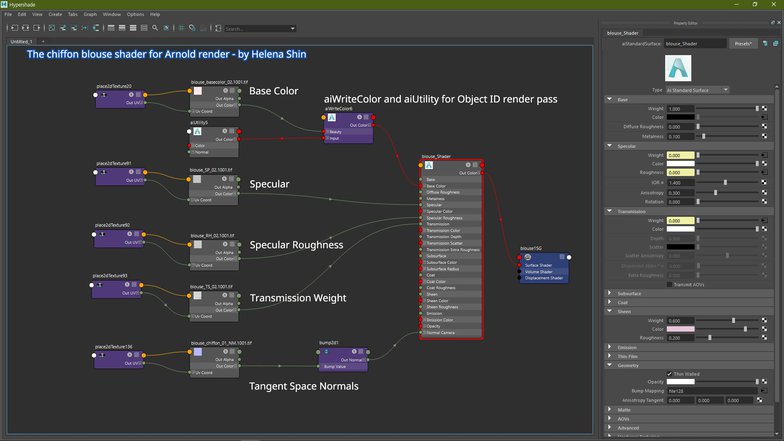 The chiffon blouse shading and nodes 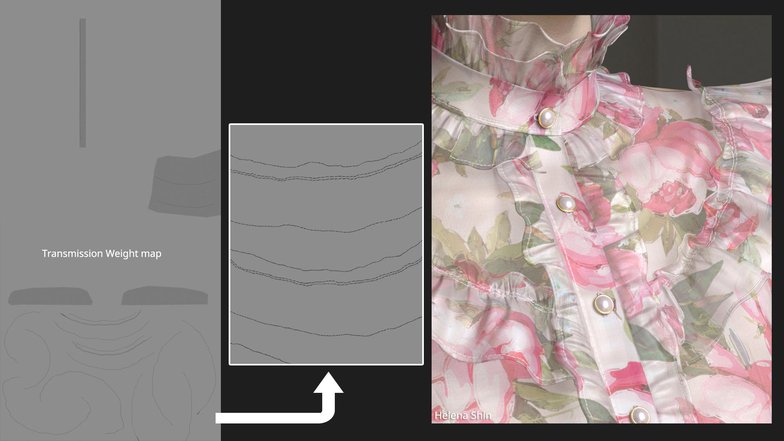 The Emma character was rigged for rendering and posing. The earrings were rigged to control the movement too, to naturally flow with the pose. I created Emma's hair using the XGen in Maya hair plugin. Then to create a beautiful atmosphere, the plane of the background and 2-point-lighting (Key light, Rim light) and Sky Dome light were set up for the rendering.