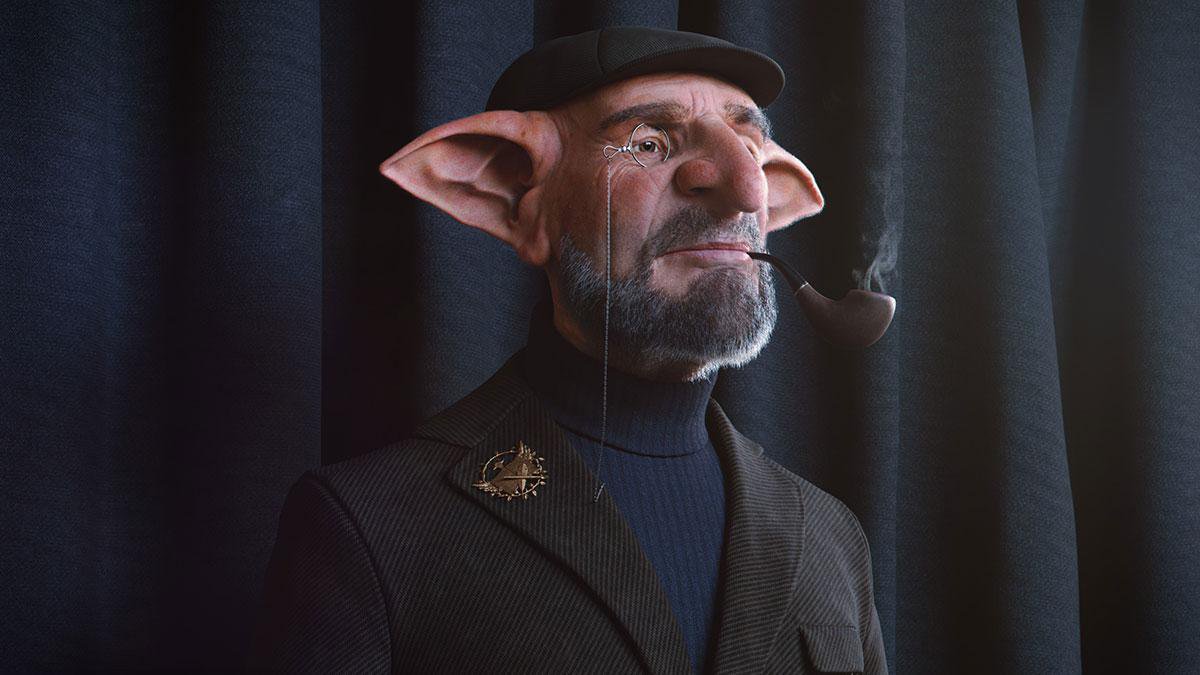 The idea for this project came after seeing the movie Fantastic Beasts and Where to Find Them. I was a huge fan of the Harry Potter franchise as a kid and the whole fantasy-magical world, so seeing the movie and the creatures they had created for it, brought me back to the days I was a little kid, and I got very inspired to do a piece like that.

So, right after seeing the movie in the cinema, I went back home and started to search for references to try to figure out what I would like to create. I had a vague Idea in my head but not clear enough to form a strong visual picture. So, I created a mood board to kick start my design process. 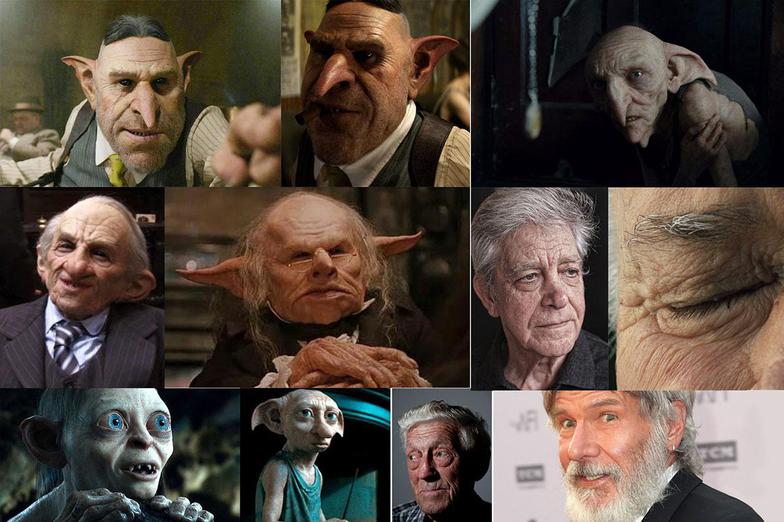 After that, I just started sculpting to see where the flow would take me. At the beginning, the shape of the head was very stylized, proportions very pushed, but I realized that to get the realistic look I needed to tone it down and go back to more realistic human proportions and shape of the head. I started with Dynamesh and a simple sphere, and I blocked out the initial shape. Once I was happy with the base sculpt, I decimated the mesh and exported to Maya for retopology. 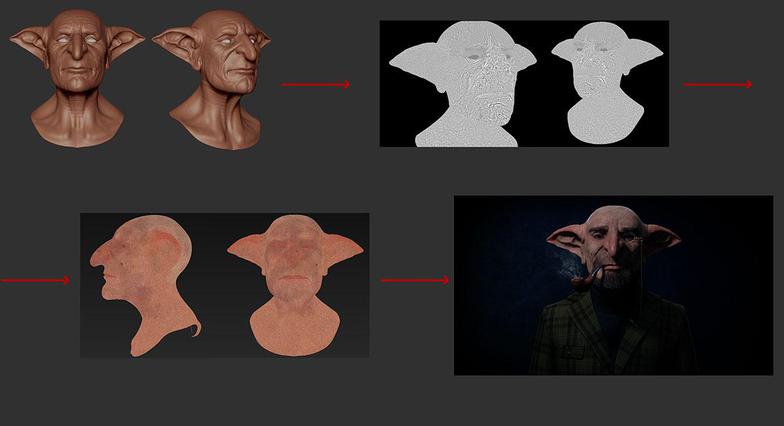 So the model was coming along nicely and I decided to model some clothing, add some props like the monocle and the pipe and started to block out the lighting and do test renders. But, after FMX 2017, I landed a job in Dublin, in Brown Bag Films. So, I had to leave my country and move to Dublin, and basically start over. It took me almost 5 months before one day on Instagram Kris Costa (Antropus) published his amazing model: Portrait of Dick Smith, and it reminded me that I need to go back and finish my old Goblin. 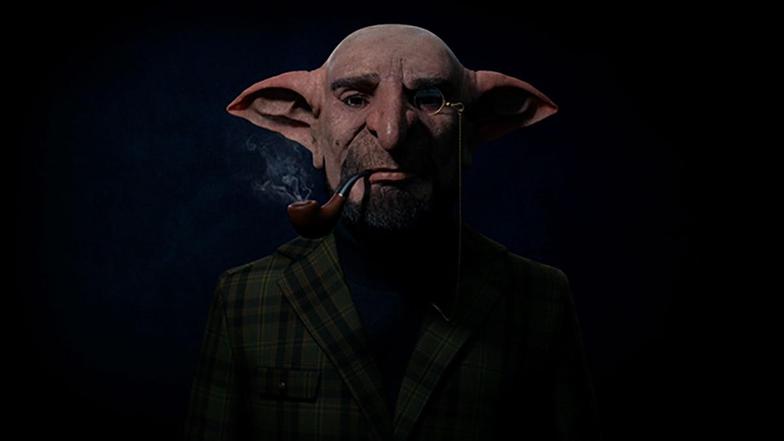 So, after seeing Kris’s model, I pretty much opened the last version I had, went to the lowest subdivision level, and deleted the higher subdivisions. I than took a skull from the default ZBrush project, extracted it and brought it into my scene. Once I placed the skull, I immediately realized the nose was too big, the eyes where too far apart, the overall skull shape was not working, and they all had to be fixed. After the first adjusting pass, I decided to scale up the body and clothes to have more realistic human proportions and I also added the hat. 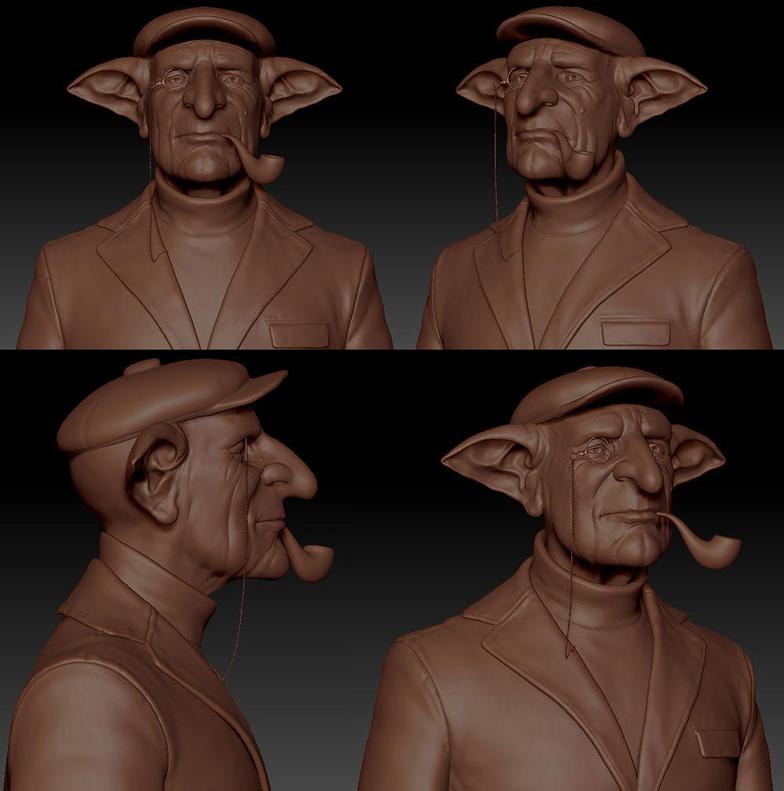 UDIM based UVs, and displacement painting

Since I wanted to do close up renders I decided to utilize UDIM workflow. To get the resolution I like, I decided to go with 5 UDIMs for the head, and use 8K textures per UDIM. From there, I took the model to Mari for displacement painting. I painted the displacement maps in Mari, but because of the exaggerated forms of the model some of the projections were a bit stretched or not aligned properly.

After the displacement painting in Mari I took the model to ZBrush and used the XYZ alphas to project details on the stretched areas of the model, fix seams as well as add blemishes, veins and other details. 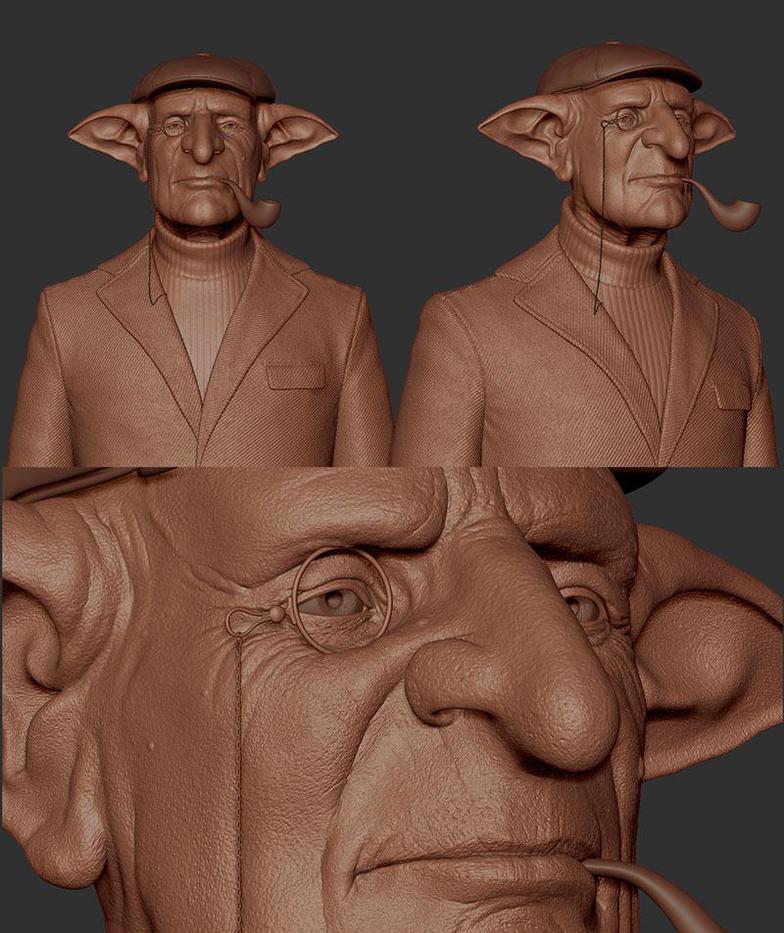 For the texturing part I switched gears to Autodesk Mudbox. I started with projecting polarized textures from XYZ textures collection, but because my model had a lot of custom details that give him character, I did a fair bit of hand painting on top to capture the skin tone that I wanted, and the details. After that, I painted the roughness map as well as the SSS map. Also in Mudbox.

For hair and fur I used Xgen. I broke down the various parts of the face to separate descriptions, and combined them under two collections. In order to work properly, Xgen requires Maya Project folder structure for your project, and it is very picky about it. To avoid a world of troubles, make sure to set up the project before starting to work with Xgen. I used a combination of Groomable splines and Guide workflow for various parts of the model. 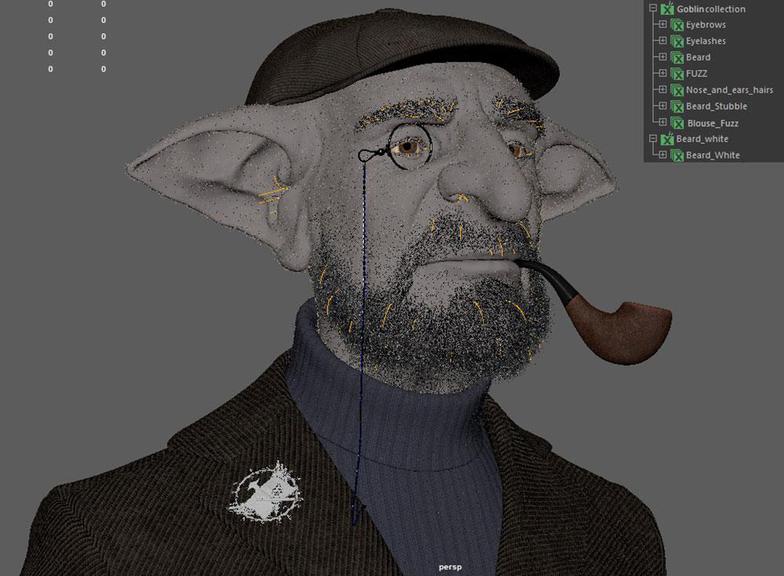 I wanted to keep the technology simple. One good HDRI light, and one or two additional lights for specific purposes like rim light, or fog light. I used a few different HDRI images from www.hdrihaven.com. All the HDRI images I use were 16K, and gave me incredible details in the lighting. The Image was rendered using Arnold 5, and to make sure that my textures and my model work correctly and are production-ready, I tested it in few different lighting scenarios and camera angles, including extreme close ups.