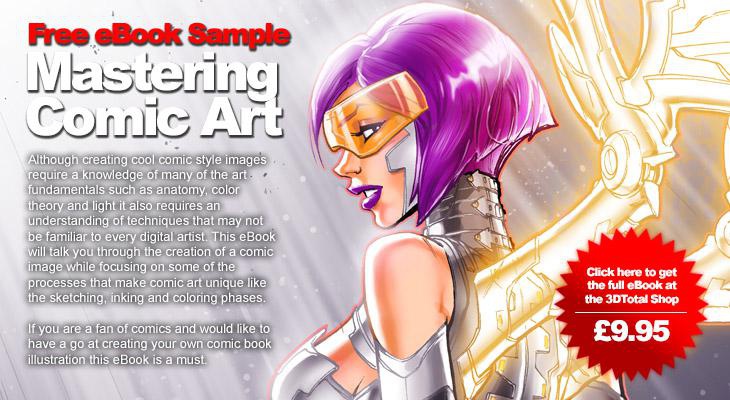 In designing a super-hero from scratch, I try to keep two essential guidelines in mind. Firstly, the costume must communicate everything you need to know about the character and his/her special abilities at a glance, and secondly, it needs to feel iconic. Superheroes, after all, are SUPER they've got god-like abilities and tend to embody some big concept or another (be it an elemental force, animal savagery, patriotism, death, etc.,) so the clothes really must convey the notion of being bigger-than-life.

In the case of "Tech Angel" here, I've created an interesting thematic mash-up by combining techy shapes and hard-energy holography with angelic wings and an all-white palette.

For me, this hits exactly the right notes for a super-heroine: sleek and sexy, but also very strong and appropriately geared for combat. I leave the shoulders, upper chest, and face bare to help draw the focus upward, which will help later during the coloring phase.

For any comic page, editors expect to see and sign off on layouts before an artist commits to final pencils. With a cover, you'll often provide several options and the editor will either choose a favorite or provide notes for a second go-around. Layouts should be simple gestural drawings around 2-3 inches tall, and the idea is to communicate pose and a general story - and that's it. Shading and detail would be a waste of time at this point and detract from the primary goal (Fig.01). 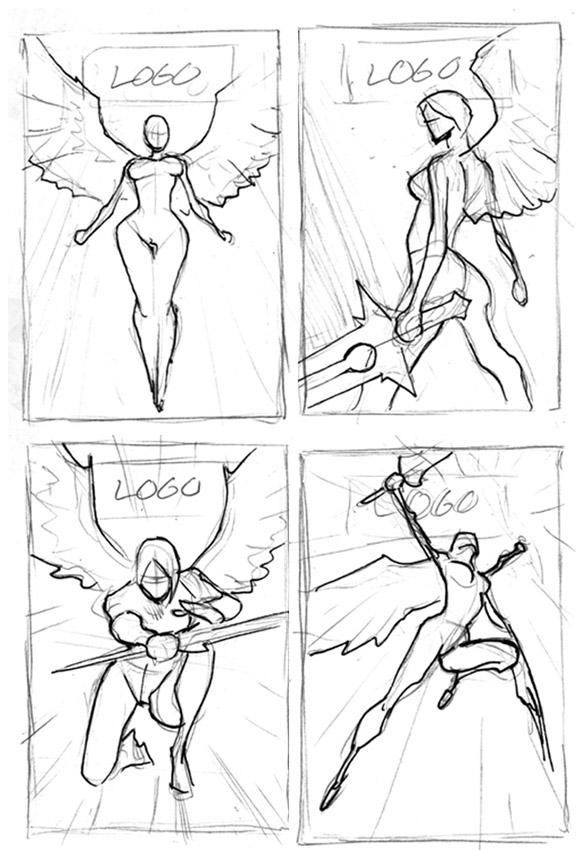 I'm treating this cover like a #1 issue, and because we're meeting this character for the first time, a portrait type of composition makes the most sense. I try out various ideas exploring warrior and angel poses, and, ultimately, my editor and I settle on #2. It's a sexy side/back shot, which will definitely help attract eyeballs on a crowded comic stand, and we get a nice close-up look at distinctive costume details like her wings and sword.

An intense light source (from heaven or a Tron-like computer environment perhaps?) fills out the background.

Incidentally, note that on each of these layouts I've taken into account where the logo will go. Never forget about the logo - treat it like part of the composition.

In the past, I used to begin each full-sized penciled piece by projecting the layout onto a blank page taped to the wall. Now that seems like a waste of time and overly-precious as well. Try to avoid crutches like these.

Rather, begin with loosely-drawn lines focusing only on recapturing the proportions and energy of the original layout. I look back and forth between sketch and full-sized image constantly to make sure the bouncy, organic quality remains intact. At some point during the process, I decide that the sword has better balance as a dual-blade, and I spend some time figuring out a convincing pose for her hand (Fig.02). 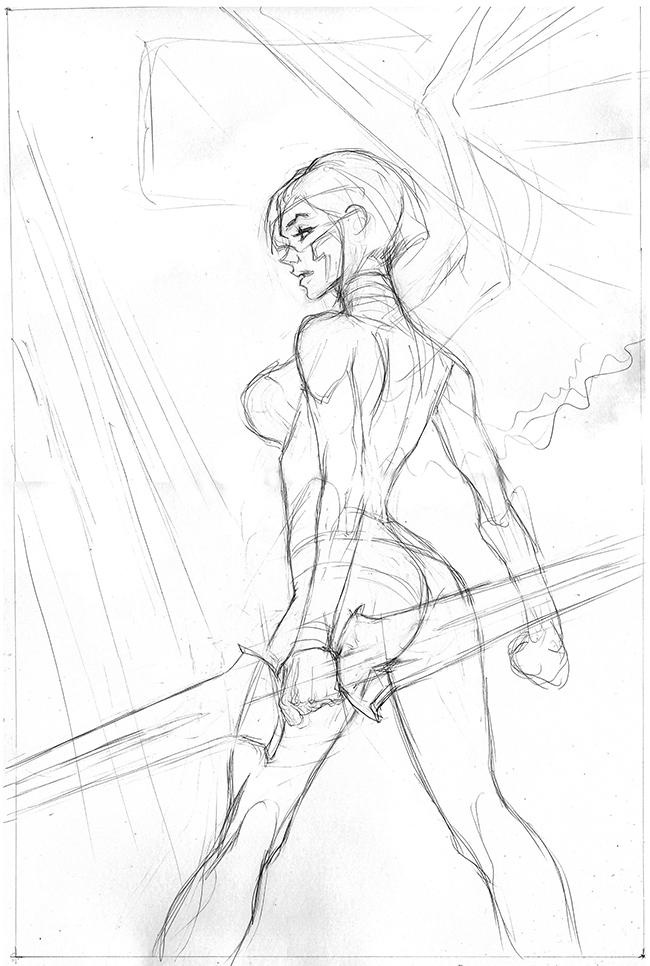 Do I use references for the pose of the body? Absolutely! In drawing a curvy female or ripped male, it's almost impossible to get all the nuances right without some real-life examples to draw from. I spent years worrying that this was somehow "cheating" and I'm here to tell you: get over it. Study anatomy carefully and begin each drawing on your own. When it's time to add details, use references to aid you. I have a large collection of photos categorized by viewing angle (front-on, profile, back, etc.,) and with a combination of these on my drawing table, I have the information I need to refine the character's form.

But I'm far from finished. Stepping back from the art, I see that I've made some significant errors in my proportions. This can happen sometimes when you're drawing at a large scale; because the top of the paper's tilted down and away from you, it's easy to overcompensate and draw things near the top too large. Held at an angle, the art looks fine, but seen straight-on, it's warped. And that's what's happened here; the head's too large and the neck is too long, especially given the low-angle we've got on this character (Fig.03). 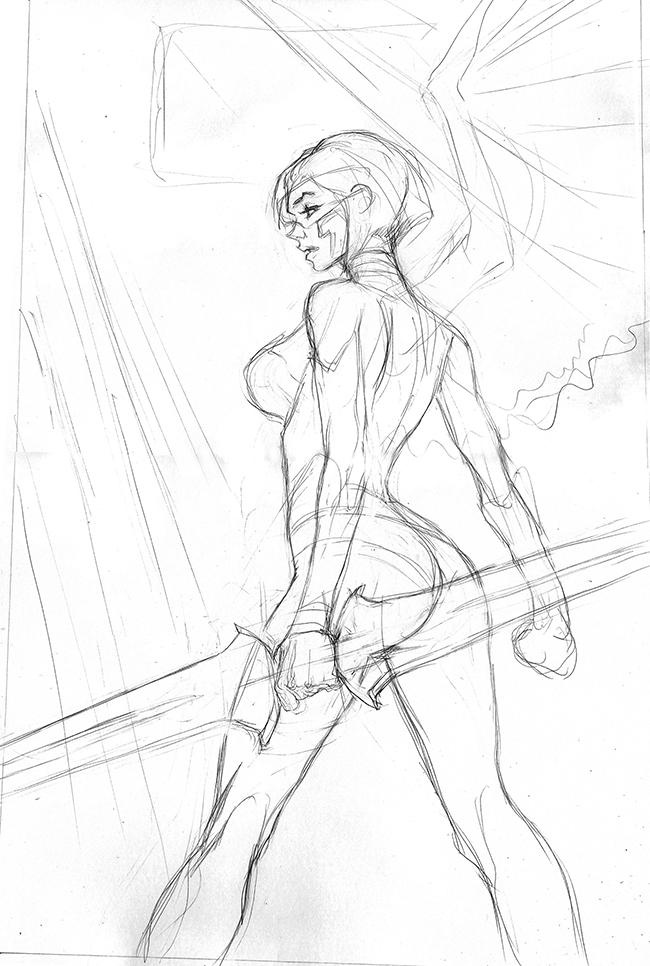 So I scan the image and bring it into Photoshop where I can easily transform the scaling and adjust the head. At the same time, I use Liquify to push a few other things, like her shoulder, into a more naturalistic position.

Another helpful trick at this point is to flip your canvas horizontally or likewise hold your drawing up to a mirror. Mistakes tend to jump out like sore thumbs when the image is viewed this way, and you should do it often. In Photoshop, I've mapped the flip command to the F5 key as an Action, and this greatly speeds up the process.

I make one last adjustment to the basic pose, by pulling her right leg outward a bit, and then I'm ready to start on her outfit. It might be tempting to add costuming details before this stage, but I wouldn't recommend it. Make absolutely sure that your pose is sound before continuing, or you may have to redo work later (Fig.04). 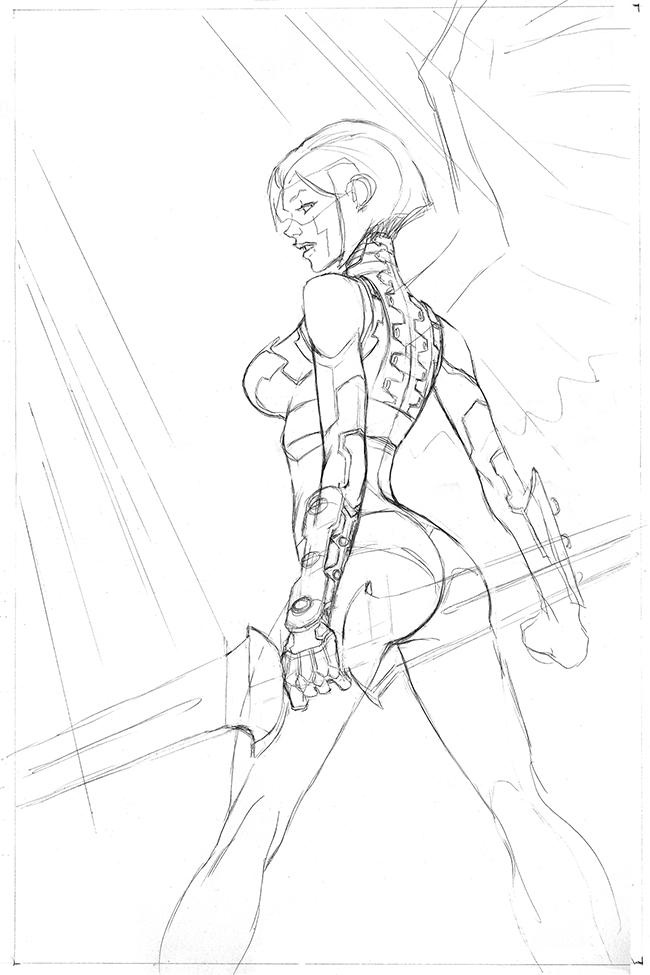 Using my original front-view design as inspiration, I begin to apply similar shapes to the character's back, designing as I go but informed by two useful rules of thumb: firstly that costume elements work best when they reflect and flow with the shape of the underlying anatomy and secondly, it helps to establish a visual "language" and stick to it. In this case, my design vocabulary consists of triangles, half-hexagons, and the occasional circle - all geometric forms, in other words. Organic lines would probably feel out of place on this tech-based character.

More surface details. I continue to use the hexagon motif established earlier, as I render the sword and leggings. Recently I've noticed that the hexagon - and particularly hexagon mesh patterns - have become an all too common visual shorthand for the sci-fi genre. I'm deliberately using the shape in a different way here, because I think the standard mesh thing's pretty played-out. If I use a texture overlay during the color phase, I'll definitely go with a different pattern (Fig.05). 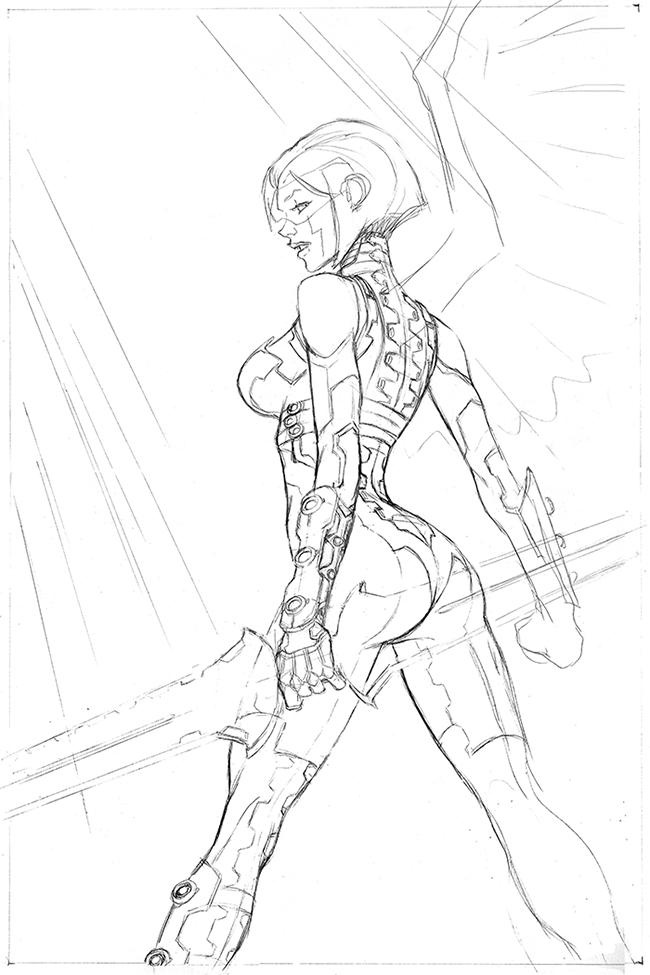 
Note that it helps to juxtapose areas of dense detail next to areas that are more sparse. This gives the eye a "breather" so to speak, as it moves around the form.

It also helps me focus the viewer's attention where I want it (which, in this case, is her *ahem* shapely behind).

All this time, I've been debating whether to interpret Tech Angel's wings as metal or hard light, and you can tell from the sketch that I originally had feather-like shapes in mind (Fig.06). 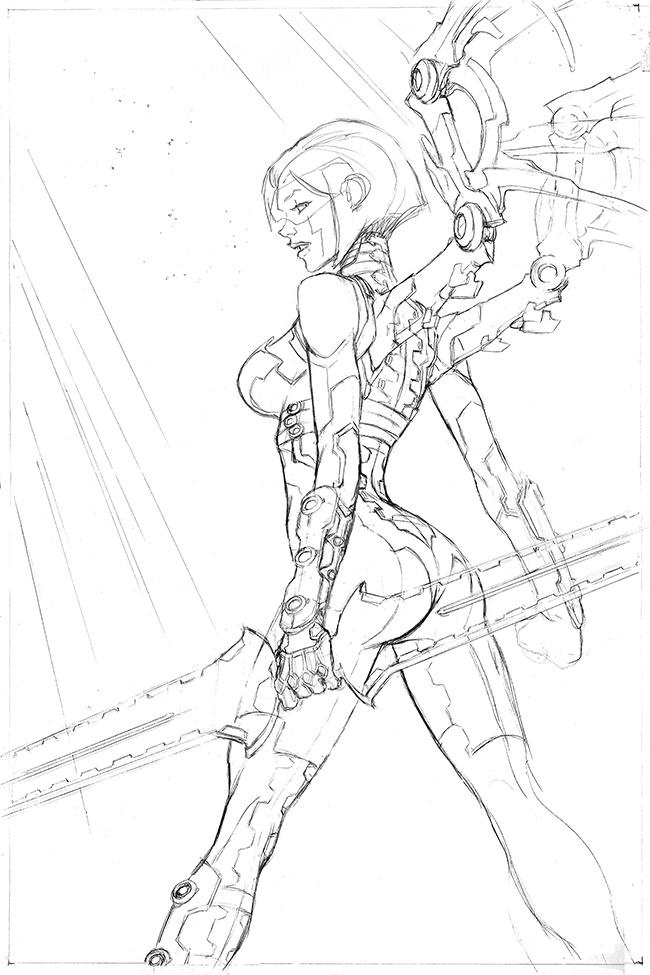 Well, at this point, I commit to complex, machine-like forms made of hard light, sort of combining the best of both worlds. I feel like the sword and wings are shaping up to be her coolest, most unique assets, and I want to put a literal spotlight on them. I complete the right leg and arm, but try to leave the line weight and level of detail a little lighter here to help sell the idea that they're further back in space. If you look at the left vs. right wing, you'll notice that I pulled the same trick there. This really helps complete the illusion that one object is closer than another.

All that remains is the face and head. Fortunately, I hit the expression just about right in the sketch phase, and all I really have to do at this point is tighten up the hair and some of the finer details. But because they're so critical let's discuss faces for a moment. For female characters, the important thing to remember is that "less is more." Even a single unnecessary line can age your character 10 years. This means that you have to nail the lines you do put down (Fig.07). 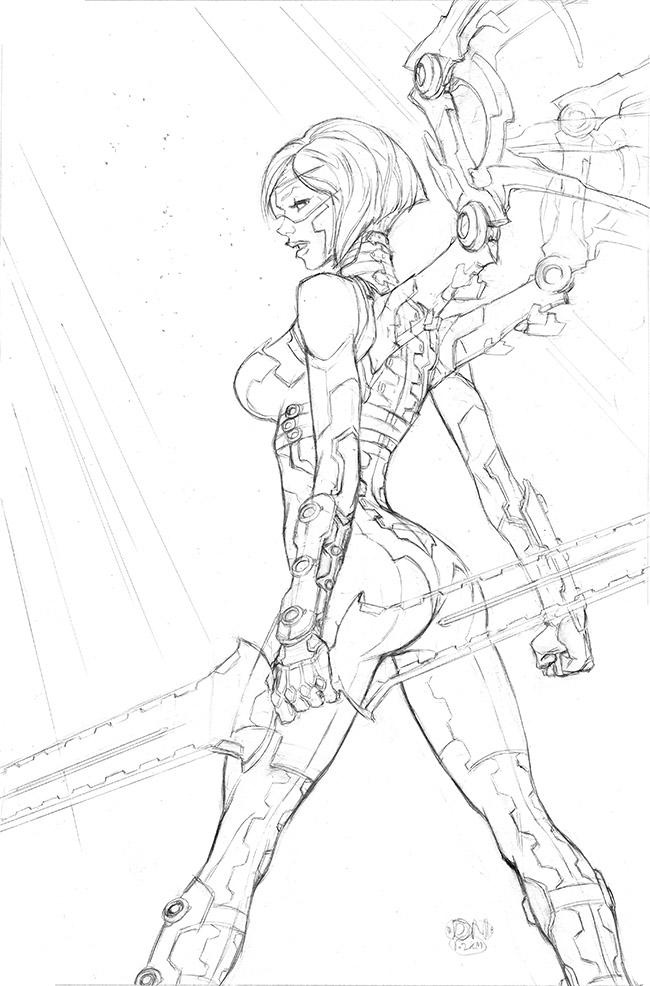 Another thing to keep in mind is that facial expression is one of only two key tools you've got (the other being body language) in communicating a character's state of mind, personality and intent. In this case, the "story" is about strength and, to a lesser extent, sex appeal. She looks back at the viewer as if to say: "Don't mess with me", but you could just as easily read it as: "Hey, eyes up here, buddy."

So there's a little built-in viewer interaction, and that's absolutely vital if you want to engage people. Other strategies for this might include a visual gag, pop culture reference, or just a metric ton of detail - in each case, you're asking the viewer to bring something to the table and to invest some thought in your art, and ultimately, that's what makes a cover memorable.