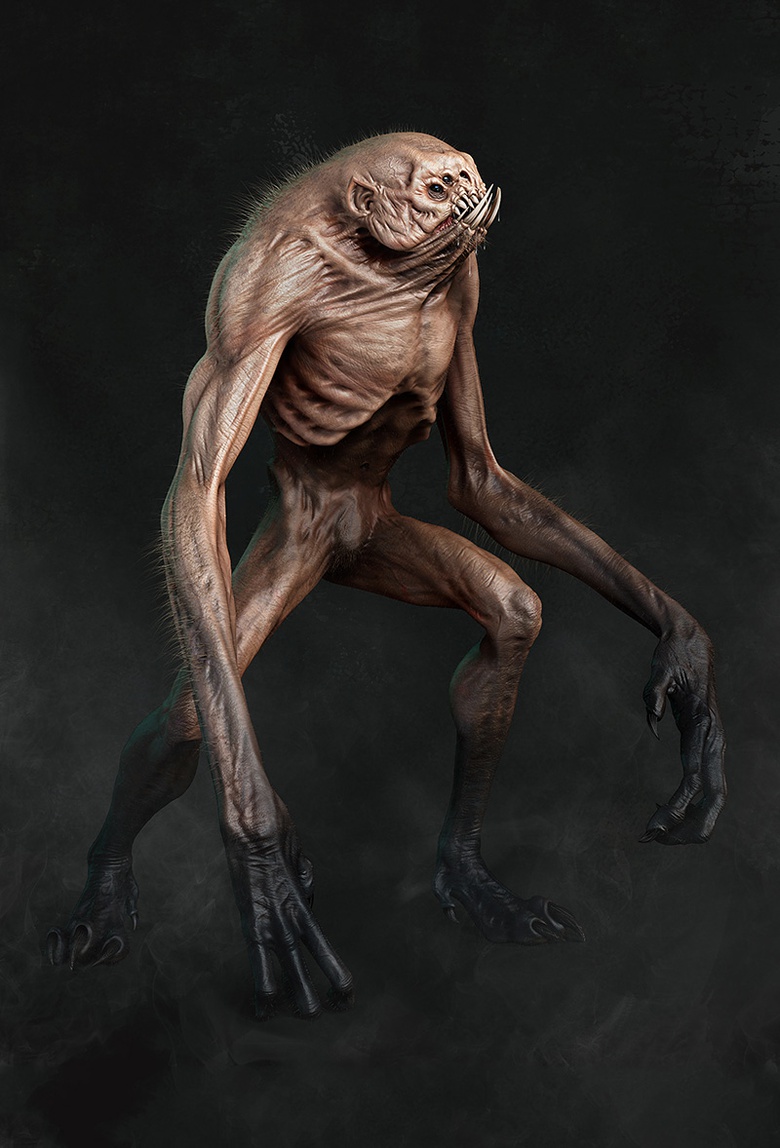 The very first step was to choose the concept. I wanted to practice my skills in ZBrush, so I set out to find something very organic, like a monster. After a long search, I found this very interesting concept by Jerad S. Marantz. 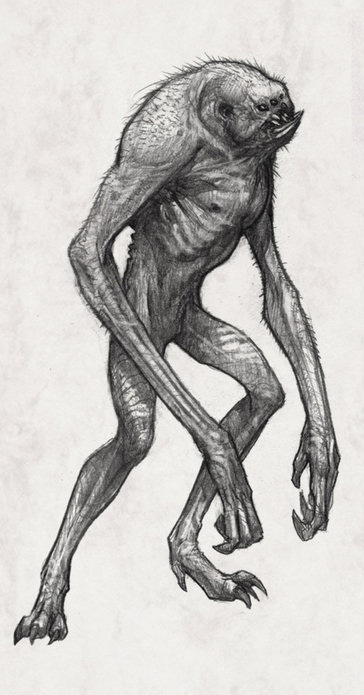 The concept sketch that inspired this image
© Jerad S. Marantz

Creating the base mesh

After choosing the concept, I created a base mesh to start the sculpture. I could have created the base mesh using the fantastic tool DynaMesh, but in this case, I created the entire base in 3ds Max. This base mesh only has the basic shape of the creature, without any detail. 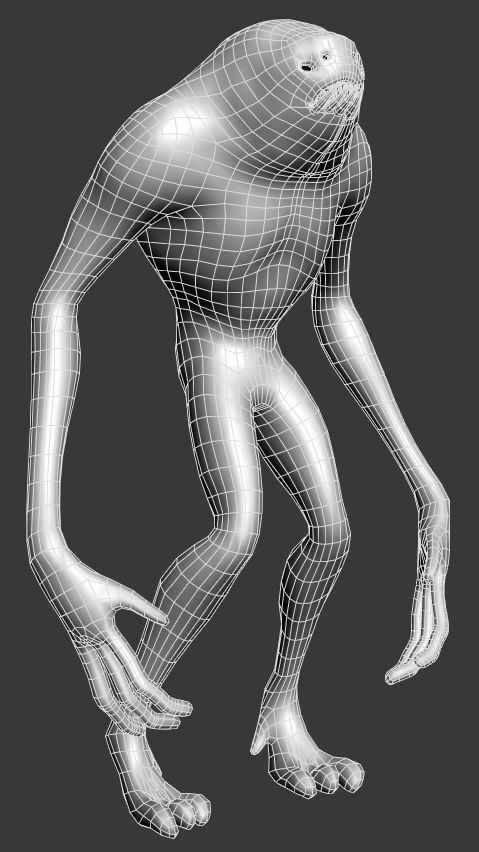 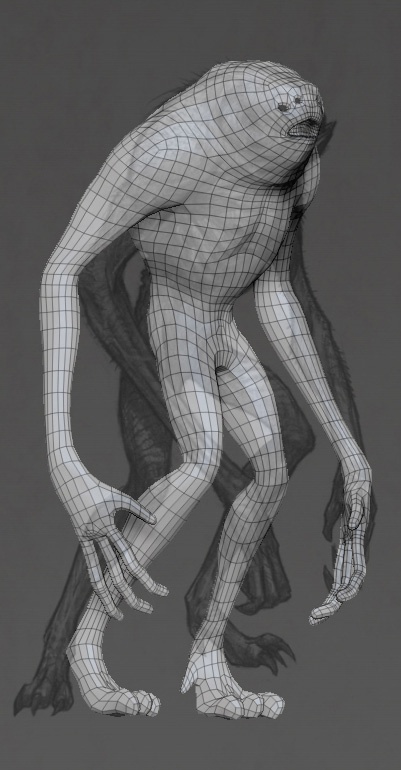 With the concept on the base mesh, it was then time to sculpt. At the beginning, I used the Move brush a lot, to get the right proportions of the creature. The process of sculpting doesn't have any secrets, you have only to pay attention to the proportions, anatomy and forms and keep working on it. In this step, I basically used the following brushes: Standard, DamStandard, Clay, Move and Inflate.

It is always good to work as much as possible in a lower subdivision level before dividing the mesh, because that way you have better control of the main forms and the mesh density. A lot of people divide the mesh multiple times at the beginning of the sculpting to add detail, and forget the most important element of the model, which is the basic shape. 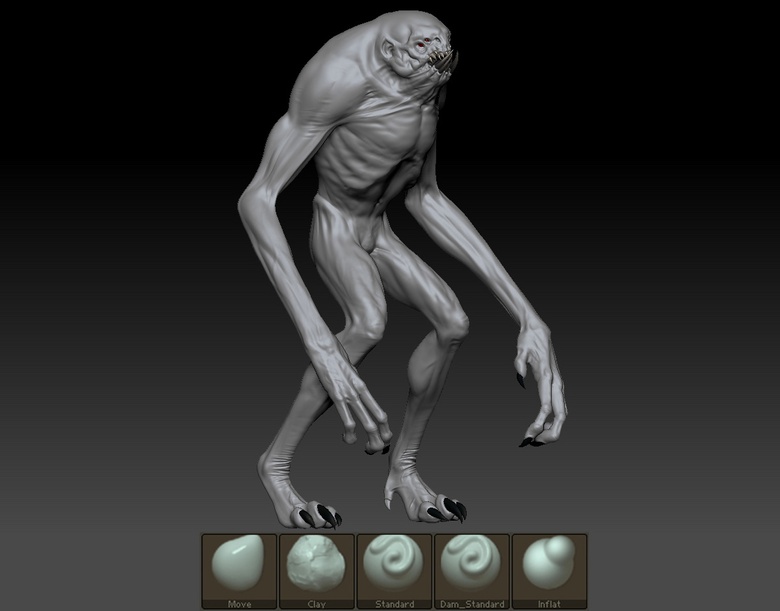 With a solid sculpture, and good proportions and anatomy, I started to add the details. At the beginning, I made larger details, like skin folds, veins and imperfections. To do that, I used mostly the DamStandard and the Standard brushes. In this step, it is important to break the symmetry of the model and to make it look as natural possible. Before going into the smaller details, I posed the character using the Transpose Master tool, which is very simple and powerful. 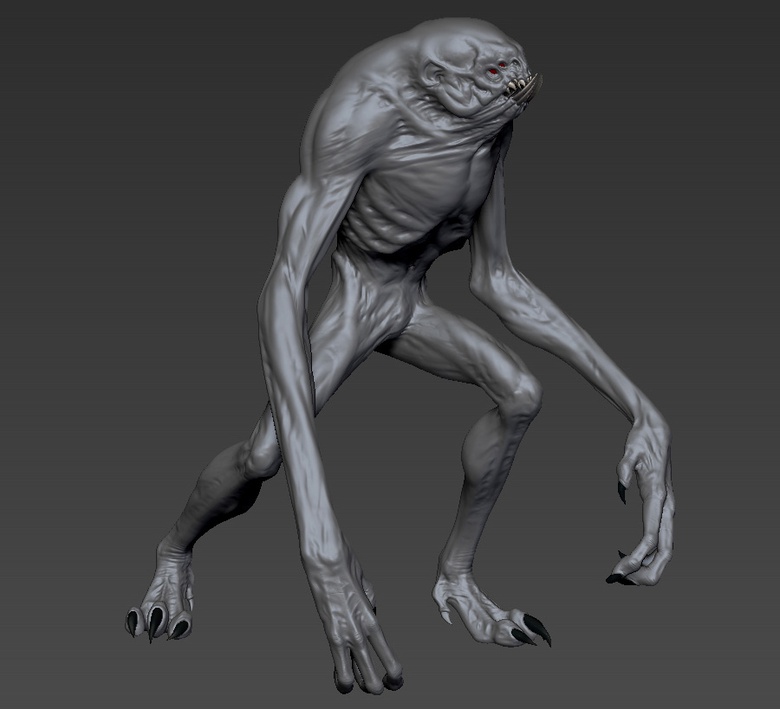 Adding key details to the skin before posing the creature

After I finished the main details of the character and posed it, it was time to create the smaller details, which give the final touches to the piece. In this step, I used the DamStandard brush again, but with a smaller size, and to make the pores and give the skin a nice texture, I used the Standard brush, with DragRect and some alphas. ZBrush comes with some great alphas, but sometimes I have to create my own using Photoshop. 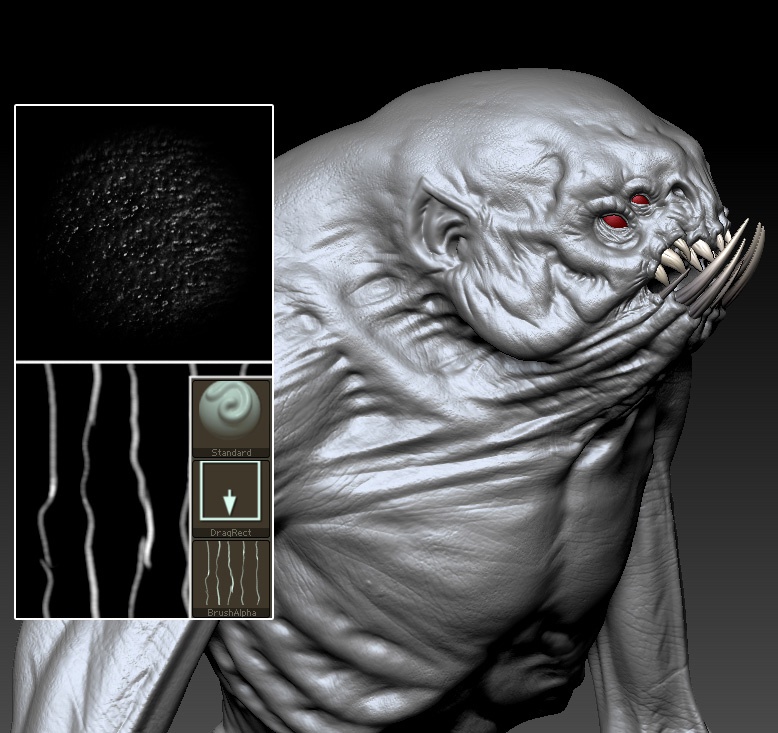 At the end, I had to do the hair. To do this, I used the Fibermesh tool in ZBrush. In this step, I painted masks in its arms and back, in order to have hair only in those regions. After playing around with the parameters from Fibermesh, I ended up with a good result. 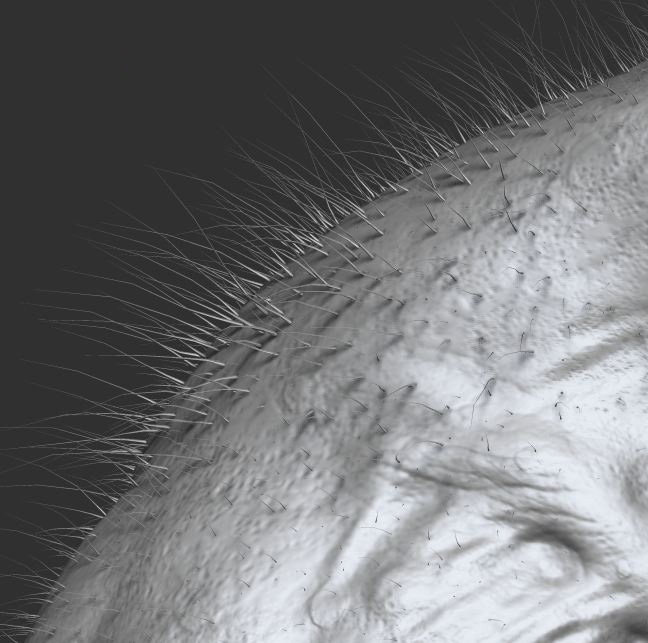 To make the texture, I searched for references of what color I should use, as the concept I chose was black and white. I ended up using a creature concept from the same artist as a reference.

In this model, I didn't use UVs, I used only Polypaint from ZBrush. I started by painting the basic colors, without worrying about the details. With the base painted, I started to add the details, like small veins, imperfections and spots. In this step, it is interesting to use the tool Projection Master to bring your model into Photoshop and add details with real photos and different layers and blending modes. Another great way to add details to your texture is to make a Mask by Cavity, which allows you to paint pores and wrinkles with a lot of precision. 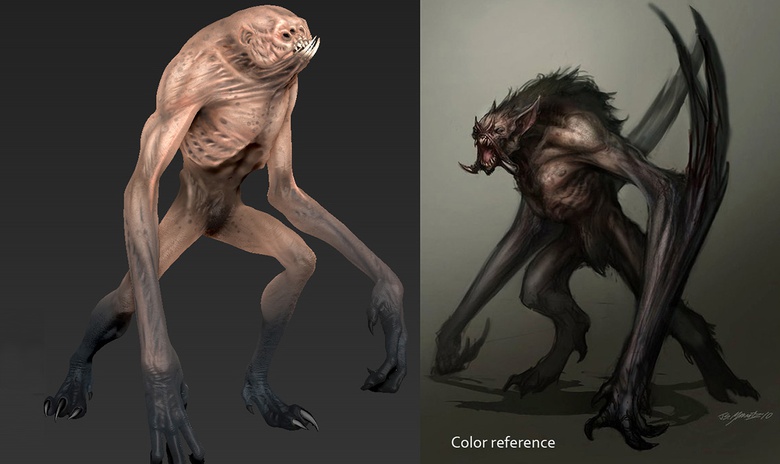 Being inspired by the work of Jerad Marantz in the color scheme
© Jerad S. Marantz

Finally it is time to render! In this case, it was the first render that I had done in ZBrush and I thought the final result was really interesting.

First, I chose the positioning of the camera and locked it using the ZAppLink. With the camera locked, it was time to illuminate the scene. It is possible to place multiple lights in ZBrush, but sometimes it doesn't work very well. In this case, I used the method of placing the default light in a determined position, like to the right of the model, then I rendered the scene (BPR render), and saved this render to use later as a pass. After that, I did that same process again multiple times and just placed the lights in a different position, before rendering and saving the render.

For this character, I used a simple custom material that I created by blending a Basic Material and a Skin Shade Material. To create reflexes, like in the eyes, I rendered passes using different materials, with reflexes on it. After doing this a few times, I had several render passes, with different lights and materials.

Experimenting with rendering in ZBrush

I used Photoshop to bring all of these images together. I used one of the images with a basic illumination on it as a base and put all the other images on the top of it, as different layers. As I wanted to have only the light of each render working on the base, I changed the blending mode of each layer to Screen.

For other passes, like Ambient Occlusion and Reflections, I had to use different blending modes. In this step, there is no rule. You can play with different layers, effects and passes until you get a good result. 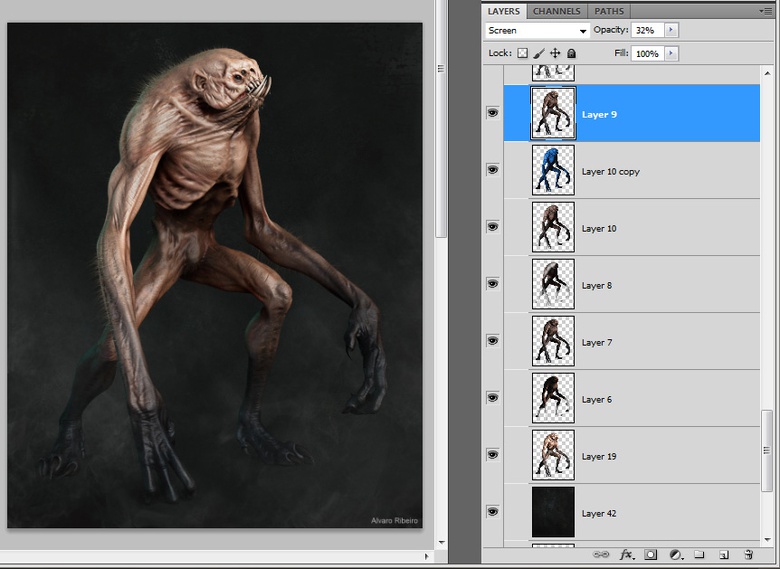 When the set of layers was done and my creature was lit with a good illumination, I did some basic post-production. I played with image contrast, color correction and fixed some issues. After that, I painted the creature's saliva with simple brushes. When the creature was finished, I only had to create a basic background and add some smoke to the scene!

That's it guys! This was the workflow that I used to create my creature in ZBrush. Certainly there are a lot of different ways to make this kind of work, you have only to test and adapt to one workflow that you like. I hope that you have enjoyed this overview! Thanks! 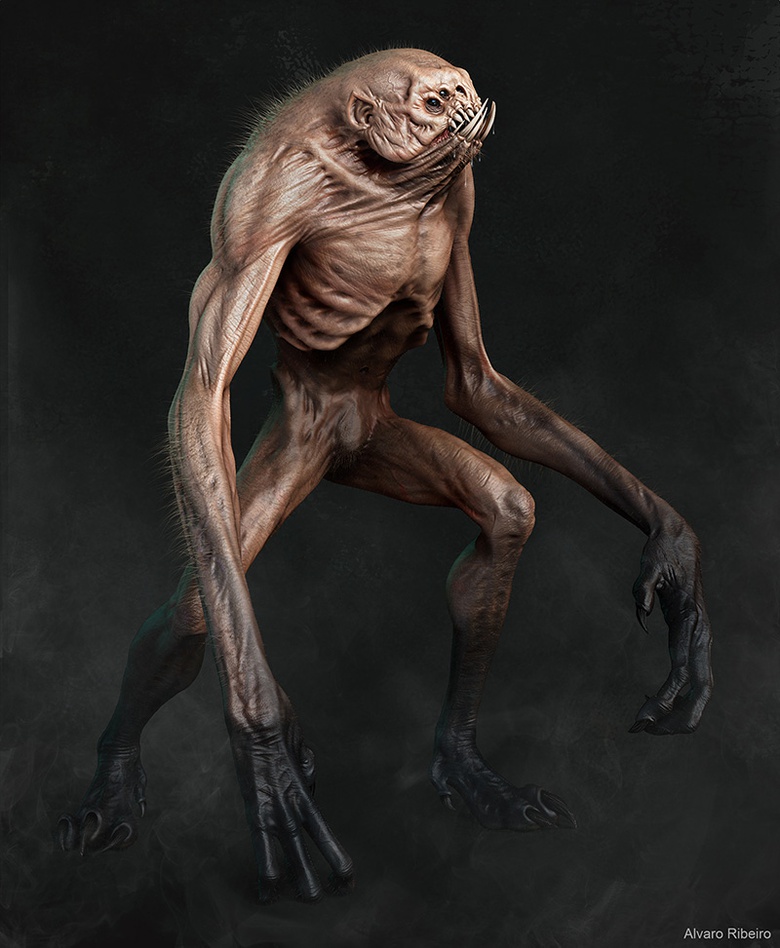 Using Photoshop for the final elements of post-production

Visit Alvaro Ribeiro's website for more
Jerad S. Merantz' concept was the inspiration for this work
Try our ZBrush eBooks and video training