Master MODO portraits: Perfect the geometry of a male head

3D artist Bert Heynderickx – aka Alberto Ezzy – shares how to import and clean scanned models into MODO, where the Smooth and Move brushes will take care of the hard clean-up work! 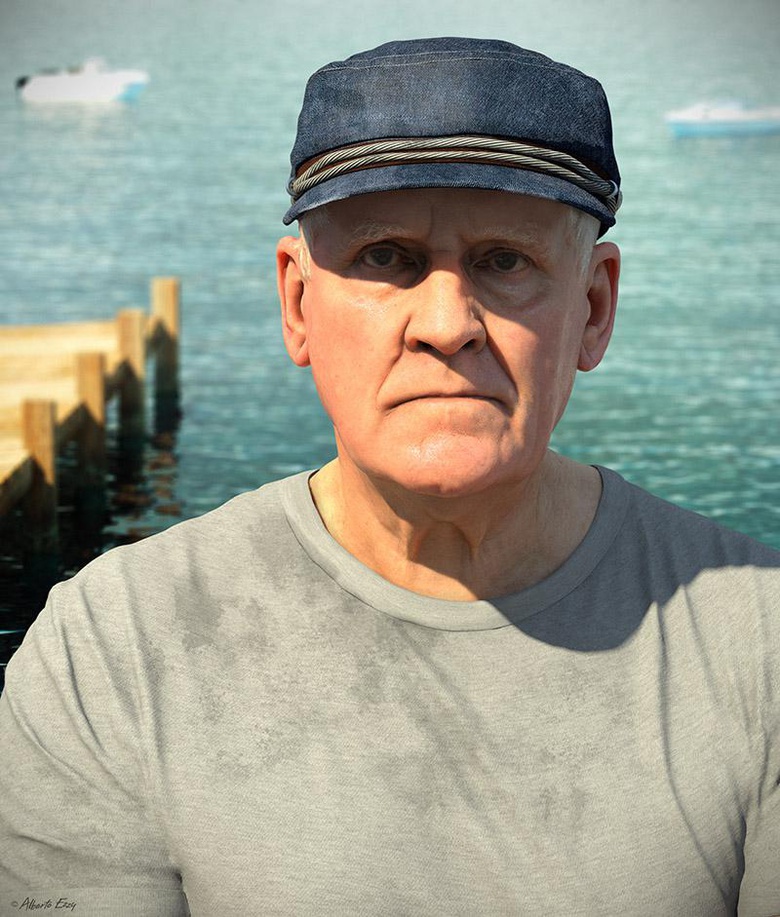 3D artist Bert Heynderickx – aka Alberto Ezzy – shares how to import and clean scanned models into MODO, where the Smooth and Move brushes will take care of the hard clean-up work!

In this first tutorial showing the creation of a male head portrait in MODO, I will reveal how to use the Sculpt Tools in MODO to clean up the geometry of scanned head data, as well as add and modify a hat model to perfectly fit the character. We'll also use the Retopology Tools in MODO to create the shirt edges.

The fisherman model featured in this tutorial is built from a combination of two separate scanned models from the talented team at Ten24. First there is the bust (the head and neck), and then there is the model of a complete man with clothes, of which I'll be using the shirt, as it has some really nice folds.

My modeling tool of choice for this project is MODO, which not only has all the tools I need for this job, but also makes using those tools a rewarding, fun, and exceptionally intuitive experience, in my opinion. I have used other 3D software in the past, but for this kind of work MODO, for me, is by far the best choice. If you haven't used MODO before, you can try MODO for free for 30 days!

When using and fine-tuning the skin shader, for example, I want to constantly check the result of the changes I make – and for that, MODO's Preview Renderer I find to be unsurpassed. I have personally found that, with other software, you can sometimes get abstract settings that you have to fiddle with to understand. While in MODO, you should see that the tools I will use for modeling, sculpting, retopology, shading and so on, are all top-notch – but also very intuitive to use.

The model used for this project is very dense and polygon-heavy, and the image maps are very large, so it was important for me to have a high-performance graphics card in tow. I am using the AMD FirePro™ W9000, which is perfectly suited to getting the job done. I have found that its large, dedicated memory (6GB) and huge amount of GPU cores (2048) allow for a smooth user experience when working on projects such as this. 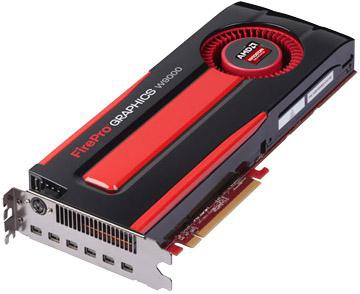 NOTE: When you import an OBJ file into MODO, make sure your Units are set correctly, so the model has the right size. For your information, I had to set my import units to millimeters to end up with a character of about 1.8 meters in height. 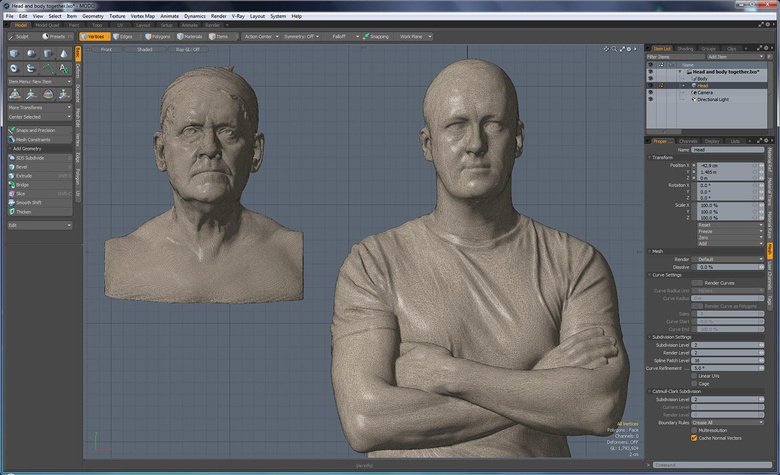 Make sure you select the right units, or you may end up with a giant!

Okay, so let's zoom in on the geometry of the scanned head now. As you can see, the model is wearing a cap, so the hair is already flattened as much as possible. But still, the geometry needs to be smoothed out to get exceptional results. This model is going to wear a hat in the final illustration, so I will only have to smooth out those parts that will be visible. 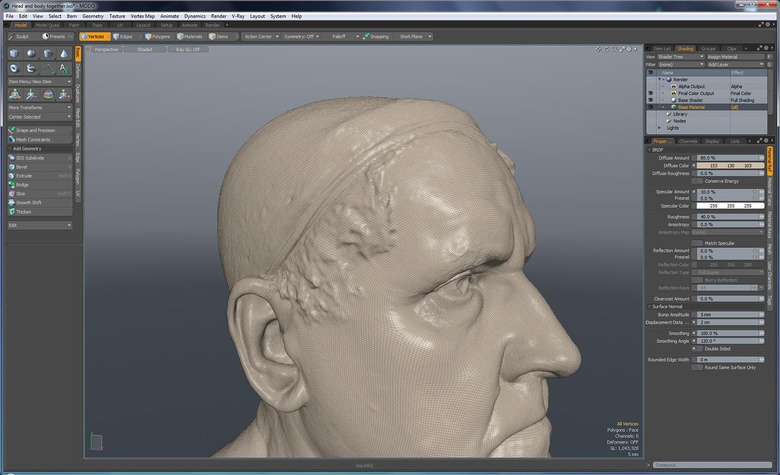 Step 3: Smoothly does it

Under the Paint Tab > Sculpt Tools, I choose the Smooth Tool to smooth out the hair strands that will be peeking from under the hat. The Smooth Tool evens out any bumpy, irregular surfaces. By averaging the positions of vertices under the brush tip, surface inconsistencies and detail will disappear.

When sculpting, I like to have 2 viewports open. The first is the Perspective View, where I move around and sculpt, and the second is my Camera View, where I can better analyze how my sculpting is affecting the entire model and final view. At this stage I also apply a Matcap shader that I find very well suited for sculpting (please refer to my Pro Tip at end of this tutorial). 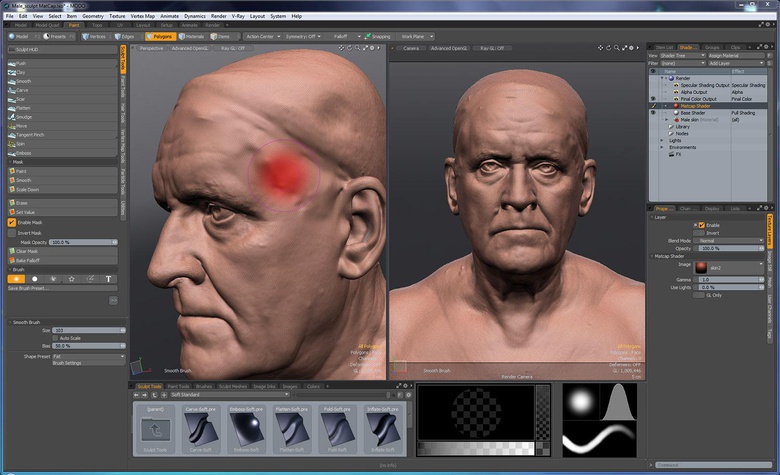 Since the shirt is not a separate part of the scanned model, I decided to cut out the head and position the shirt over the fisherman's neck. Also, because the head's geometry is all quads and the shirt's geometry is all tris, it's almost impossible to connect them! So instead I decide to create a border on the shirt that covers the transition of the two models.

This is also a good moment to create a UV map for the shirt, with the Unwrap Tool. Following this, I like to ‘soften' and regularize the map using the UV Relax Tool. 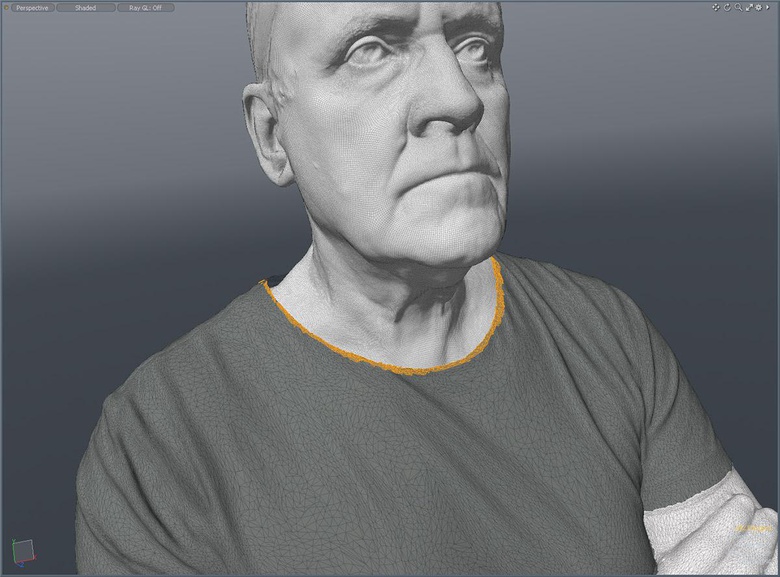 In 3D, guys can borrow one another's shirts in just a few clicks! 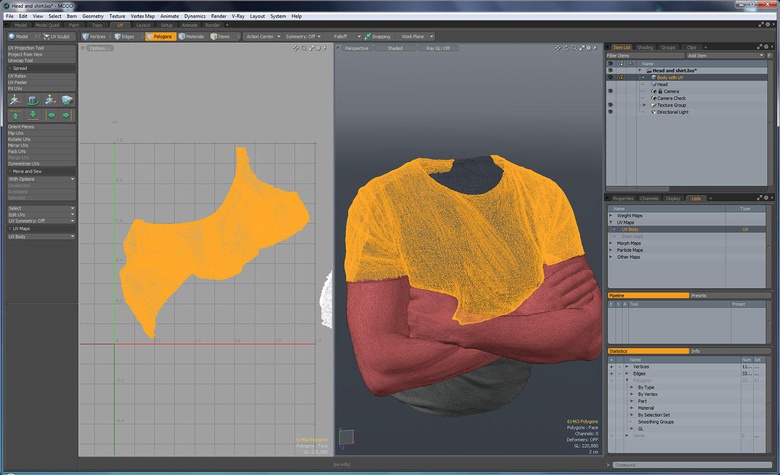 Step 5: Fitting shoulders under the clothing

After combining 2 different models, the curve of the neck and shoulders of the one model doesn't immediately match perfectly under the shirt of the other model, so I have to do some sculpting work here. Under the Paint Tab > Sculpt Tools, I simply choose the Move sculpt tool to gently and smoothly push skin parts under the shirt. The Move sculpt tool easily grabs the mesh inside the brush and drags the surface in the direction of the mouse or stylus. 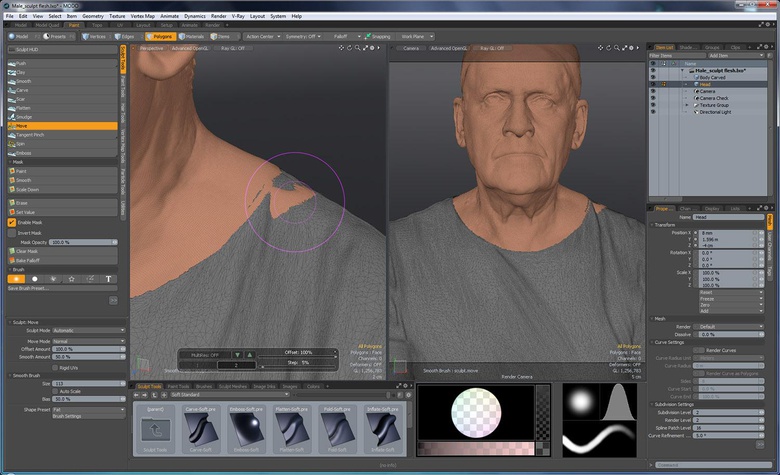 Be careful to ensure the shirt fits your model, or it will look awkward later on!

Under the Topo tab, I select the Pen Tool to create a row of polygons that neatly snaps to the underlying geometry of the neck and shirt. I start with large polygons that quickly give me a rough shape. When I'm happy with the base shape of the shirt border, I refine it using the Add Loop tool and the Polygon Subdivide tool (shortcut: Shift+D).

The Add Loop tool simply adds a continuous edge through a series of polygons and the Subdivide tool splits selected polygons into four smaller ones. Now it's really important to use the Smooth Retopology tool to let every new detail ‘snap' to the underlying geometry once again. 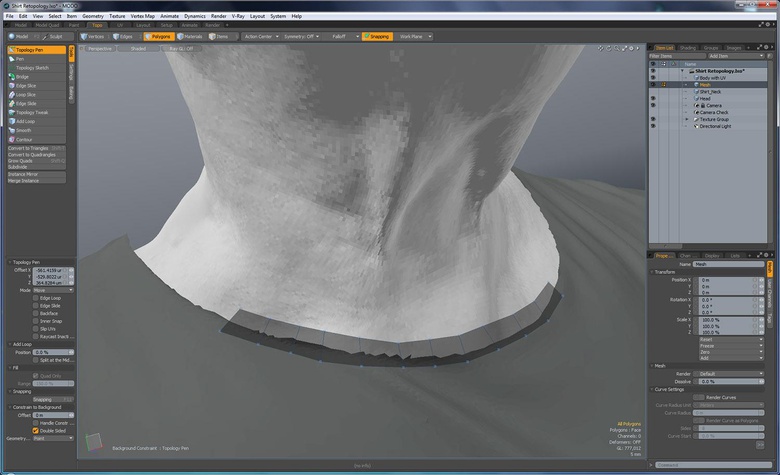 I find the Retopology tools in MODO a pleasure to use! 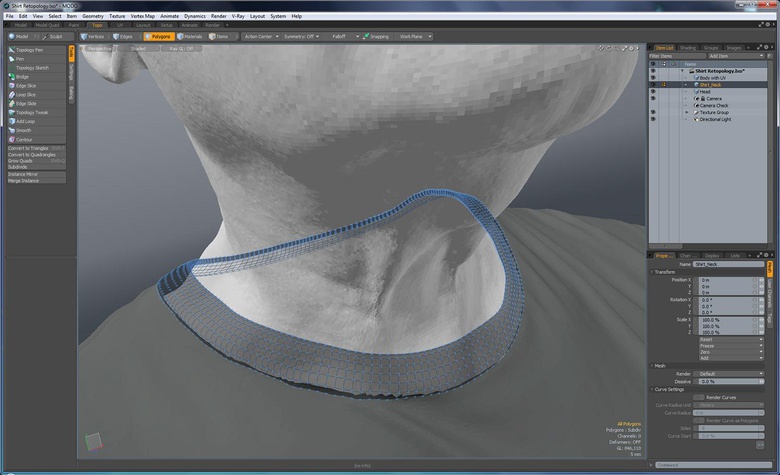 The Topo Smooth tool is ideal for snapping to underlying geometry

Step 7: Fitting a hat to the model's head

The hat is a model that I purchased from Turbosquid for a different project, but I felt it had the right look I was going for with this character so I decided to use it here. At first, it didn't fit the head model at all! So, under the Paint Tab > Sculpt Tools, I choose the Move Tool to gently and smoothly move parts to kind of mould the hat around the head.

Again, I keep the 2 viewports set up so I can have a clear view of what I'm doing. 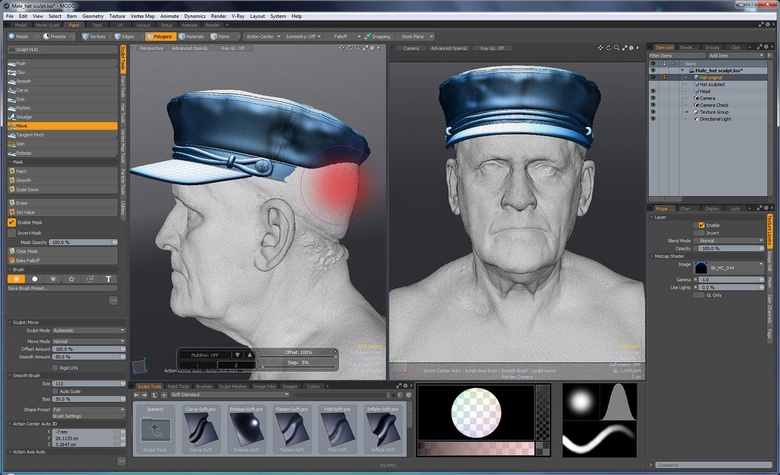 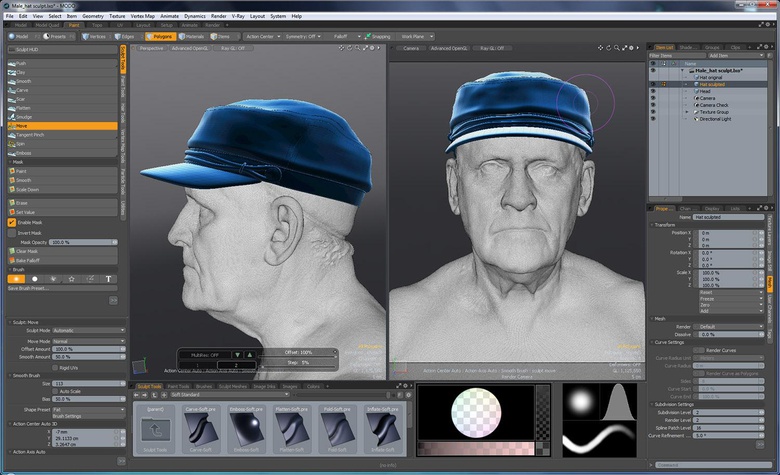 Et voila! From a Lieutenant in the desert to a Greek fisherman!

Human eyes are about 24mm in diameter. So here, I make 2 spheres of that size and position them accordingly. I also choose to assign a Material to them by pressing the shortcut key M, and assigning a unique name to the material. That material will have a very slight amount of reflection. And that's all there is to it! The rest of the eyeball doesn't have to be modeled because it's already scanned. And the different image maps and SSS we will apply in the Skin shader will provide a very convincing-looking eye. 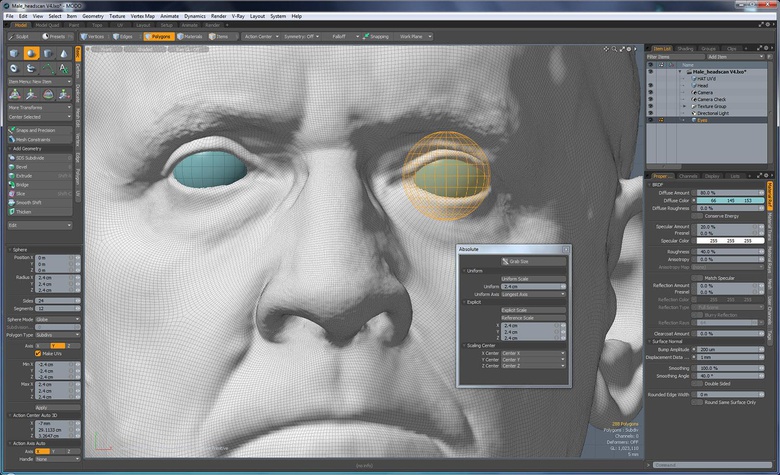 Eyes. These are not yet windows to his soul, but we'll get there!

First of all, I tried this technique for the lashes: I selected a row of edges, converted them to a curve, and duplicated one lash along that curve. But I didn't like the result. To improve things, I place, duplicate, rotate, and scale them all manually. They are barely visible in the end result, but sometimes it's these little details that make all the difference when it comes to capturing a believable human character. 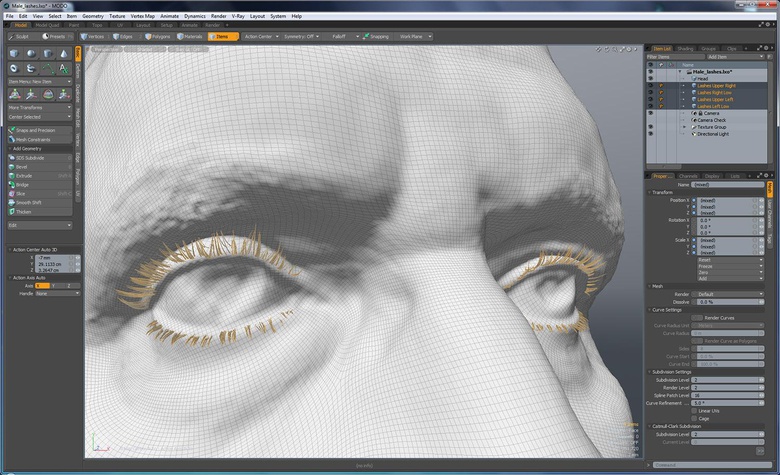 I really wish there was a ‘make lashes' button! They are a lot of work...

Background elements to frame the fisherman character include a water plane, underlying ground, a few boats, and a wooden pier. The pier is modeled with basic Primitives such as cubes and cylinders.

A bit of variation and deformation can then be added with tools such as Bend, which deforms geometry in a curved manner. And don't worry: things will become more visually appealing at the texturing stage, which we'll tackle in the next tutorial – coming soon! 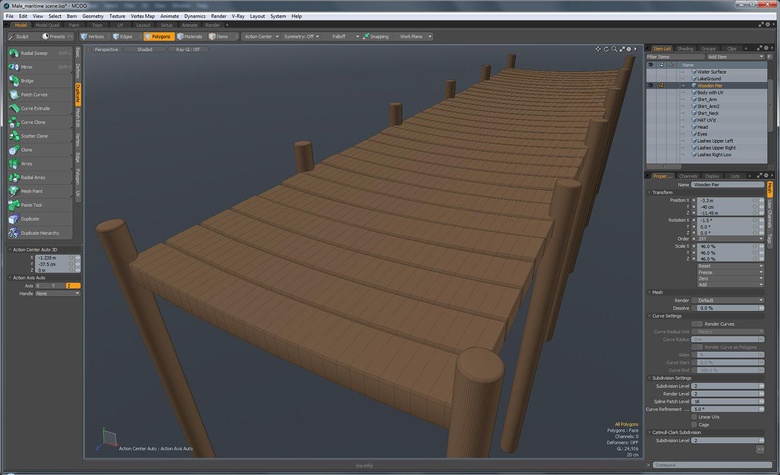 This is the wooden pier, waiting to become a background asset, which will be shot out of focus

This concludes the geometry/modeling part of this tutorial series. In the next installment we'll take a look at the creation of the different image maps that we will apply as textures for the skin, hat and shirt. Stay tuned!

To get a good representation of the geometry in the viewport, set the Smoothing Angle of the material of the head higher, then the usual 40°. I used 120°! 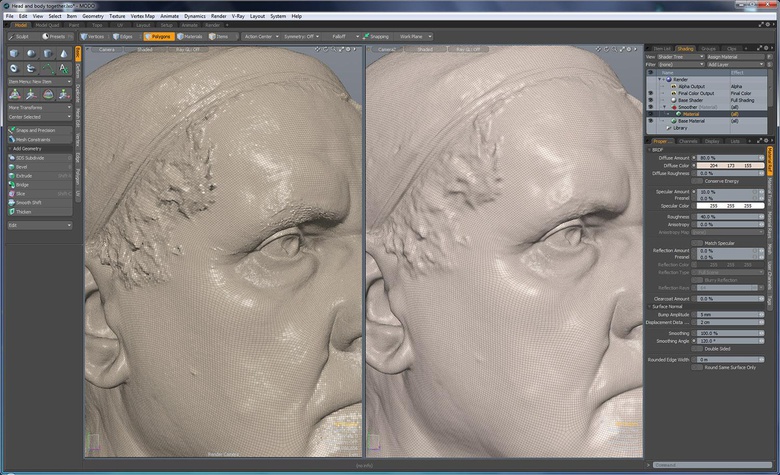 Top tip 2: How to apply a Matcap Shader

First, choose from the list of Matcap presets in the Preset Browser Palette. Then go to the Shader Tree and Add Layer/Special/Matcap Shader. Make sure it is placed above the Base Shader! Then you can choose your preset in the Image drop-down list. I like the Skin2 preset. You also have to be in Advanced OpenGL mode to see the result.

This is where the Matcap Shader should be positioned in the