3D Artist Bert Heynderickx - aka Alberto Ezzy - discusses the lighting setup of this stunning 3D female portrait, as well as how different Render Outputs can be applied in post-production 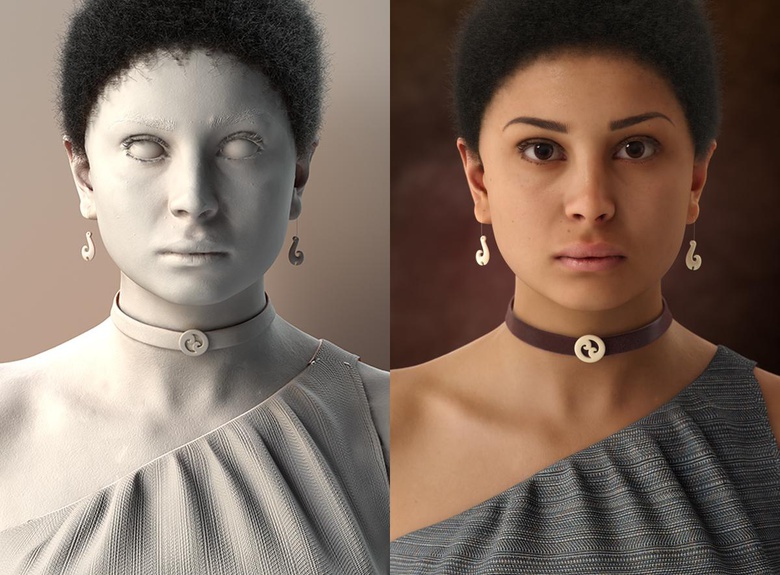 In this part of the tutorial series, we'll take a look at the lighting, Render Outputs and post work to finalize a 3D portrait

3D Artist Bert Heynderickx - aka Alberto Ezzy - discusses the lighting setup of this stunning 3D female portrait, as well as how different Render Outputs can be applied in post-production

In the first part of this mini-series, we began with a look at the creation of a female portrait, 'My Kiwi Friend', in MODO. We then went on to discover how to create the various image maps needed to texture the female model, using MARI for the most part, with a little Photoshop as well. Then in the third part we looked at how to import those previously made image maps into MODO's Shader Tree, as well as the Hair and Fur settings.

So in this instalment, we're going to take a look at the scene setup now, lighting by Area lights, as well as using a custom HDRI map. We'll also see how different Render Outputs from MODO can come in handy in Photoshop. As with all the previous parts, I am using an AMD FirePro™ W9000 for the workflow featured, which I personally find to be a great solution for high-res character creation. 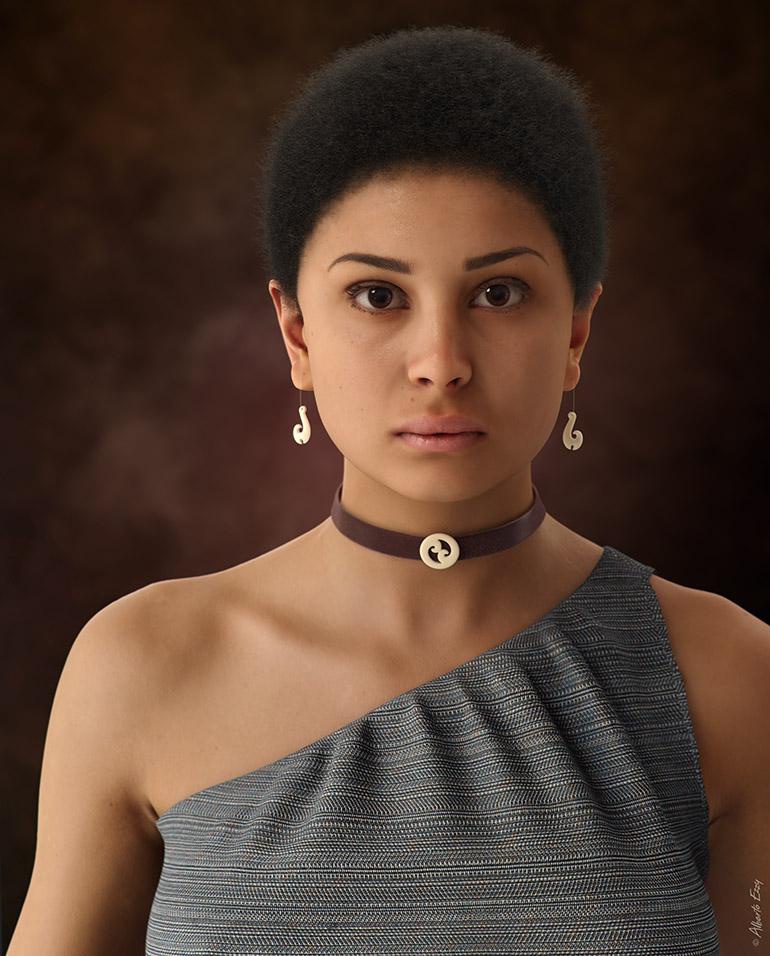 I'm using a camera with a focal length of 80mm. Let's have a look at the simple scene setup: 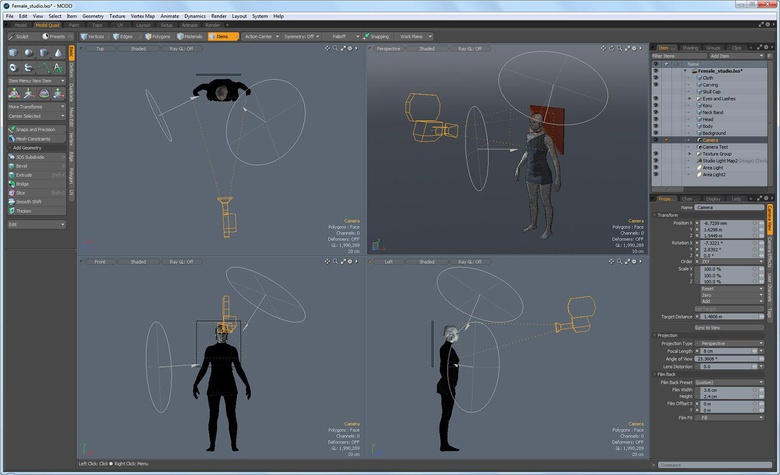 This setup seems deceptively simple, but there's a lot more lighting going on by the custom HDRI!

My main Area Light on the left has a radiance of 3.0 W/srm2. The fill Area light on the right (and closer to the top) is set to 0.6 W/srm2. The Area light type is similar to a studio soft box style light, often used in professional photography because of the soft shadows they produce. These are excellent for creating photorealistic lighting effects, as they create a very natural light emission and smooth shading.

Let's isolate these two lights and see how they contribute to the lighting of this scene: 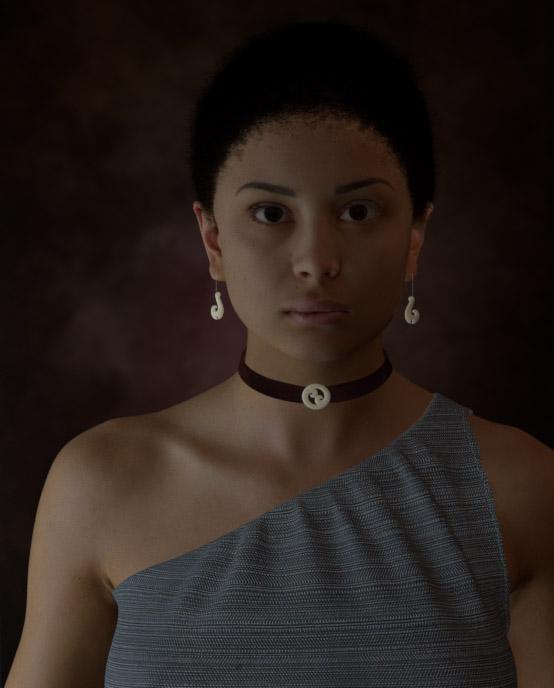 Step 3: Reflection in the eyes

I had a specific point in mind for the highlights of the eyes. A great tool to handle this job effortlessly was the HDR Light Studio software (please see my Top Tip at the end of this tutorial). In Reflection LightPaint Mode, it lets you click on your 3D model in the MODO viewport to move the active light to a new location that will be reflected in that part of your 3D model. Amazing stuff! It's mostly used for product and automotive shots, but I also like to use it in this kind of portrait shot, too. 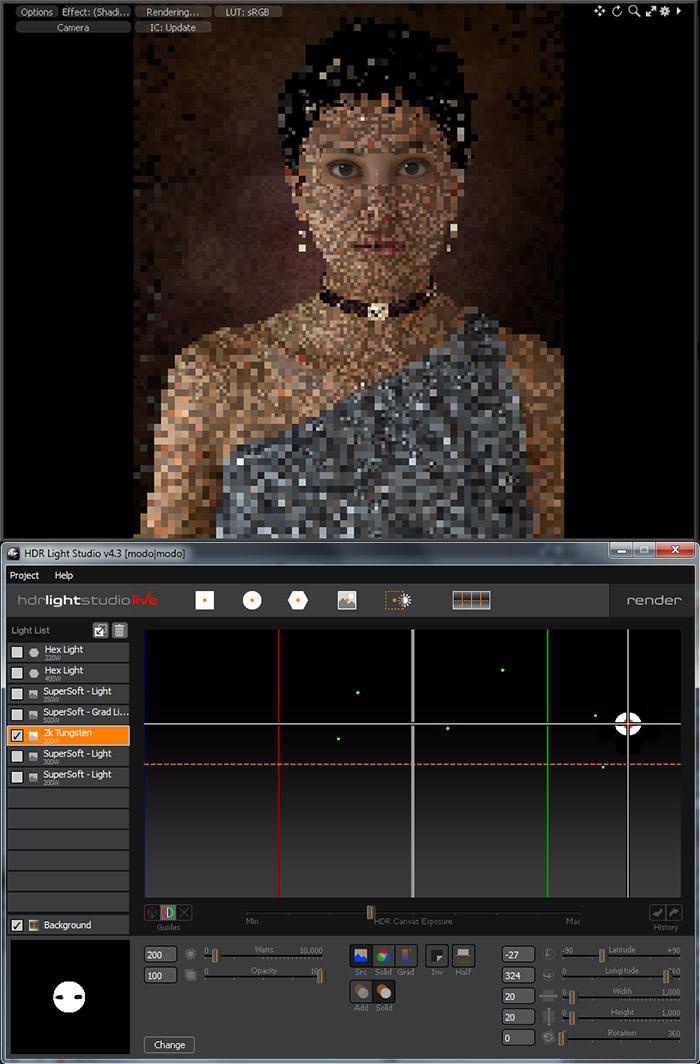 Now in Illumination LightPaint Mode, I place some soft boxes that will nicely light the left arm and bring out the anatomy of the upper body. Visually, I also like to play with a very subtle warm side, and an opposing cold side in the image, so I place two colored lights (blue and yellow) accordingly. HDR Light Studio helped me to place these - I simply clicked in the viewport where I wanted the illumination to be. 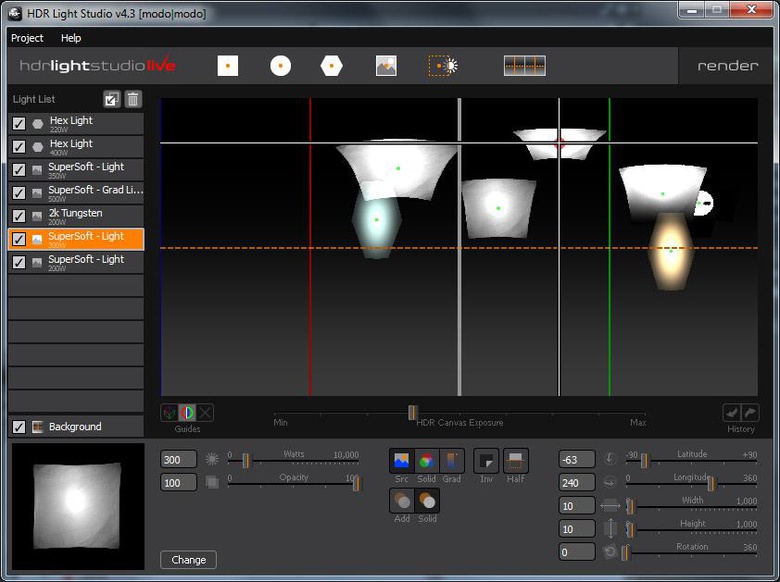 The Depth output is useful for calculating depth of field in an external application. When Remap Pixel Values is enabled, users can alternately define a Maximum Depth distance. I enabled this feature and entered a distance of 1.55m. This gives me a nice map that I will use in Photoshop to create a subtle depth-of-field effect. 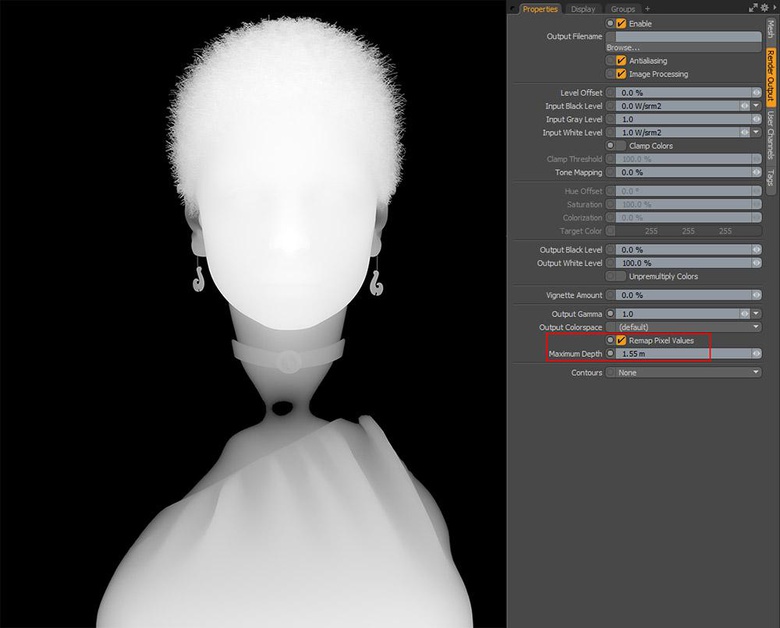 There is an important Render Output found under Add Layer > Render Outputs > Lighting > Illumination (Direct). It generates a channel exclusive to the illumination in a scene from all direct light items, such as the Area lights in this scene, independent of all other illumination types and surfacing attributes. I like to use it with Soft Light blending mode on top of my Final Color Output. 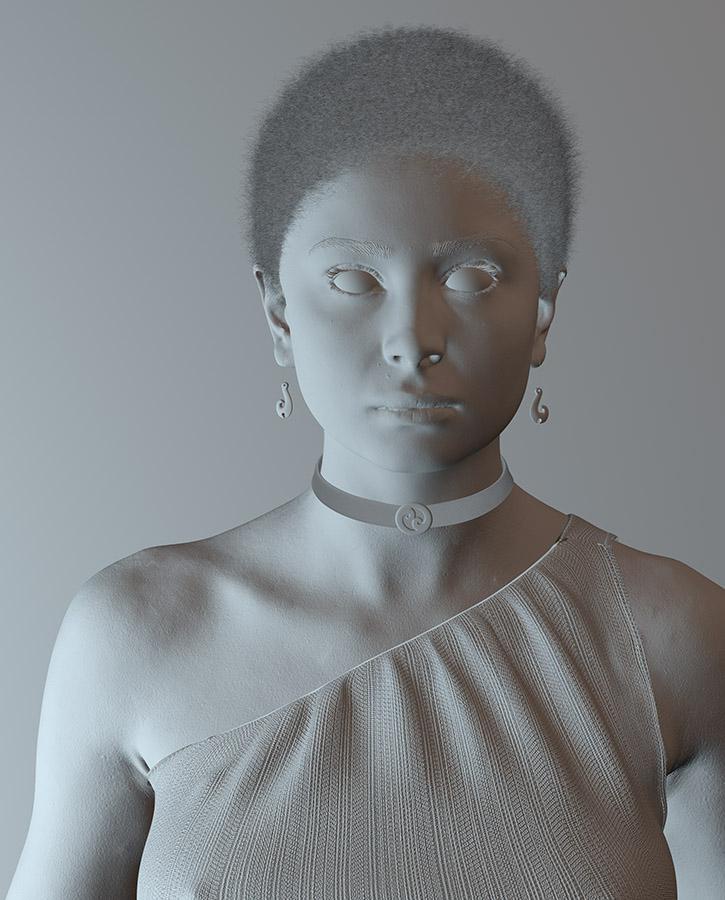 This Render Output is found directly under the previous one. Its output generates an image exclusive to the illumination in a scene from all indirect sources, such as image-based lighting and luminous polygons, independent of all other illumination types and surfacing attributes. Next I will show you how I use these Render Outputs in the final Photoshop composition. 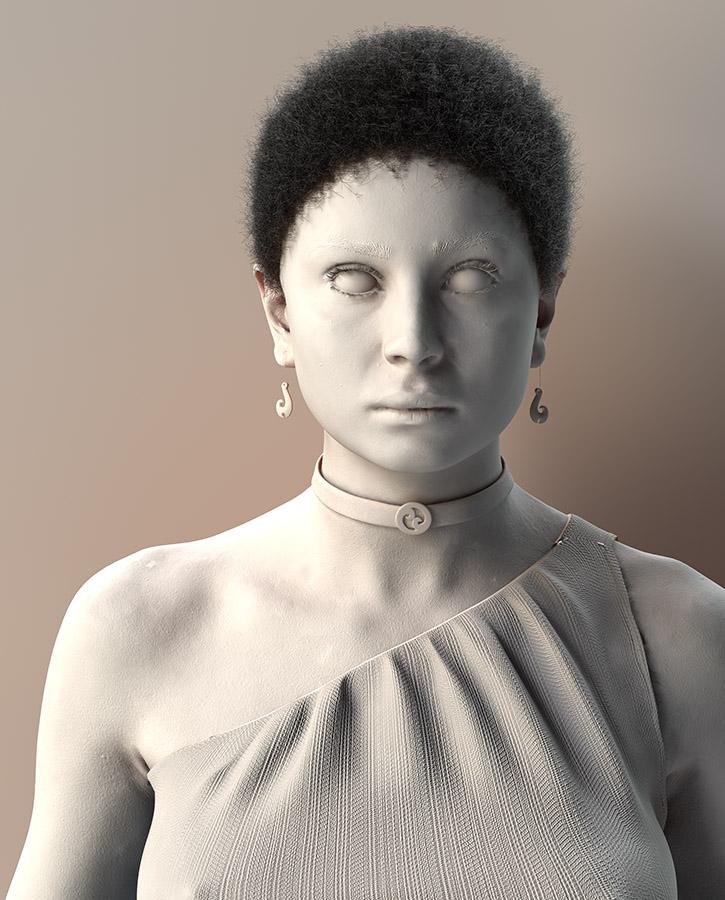 It looks like there is some voodoo going on here, but it's just another Render Output from MODO!

We begin the post-production with the Final Color Output. Take it into Photoshop now for some fine-tuning... 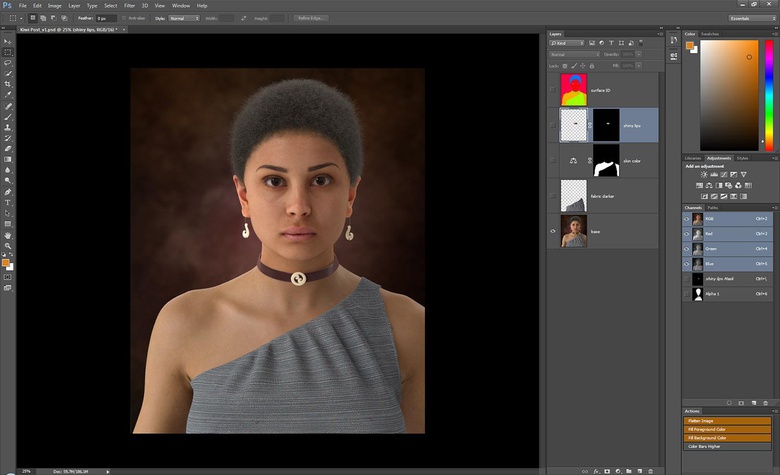 Before I evaluate the final result, I always try to take some time away from a project, so as to approach any post work with a clear mind

First of all, I find the cloth fabric has come out a bit too light, so I'm going to darken it here. This is where the Surface ID comes in handy. I select a little piece of the color of the cloth part and then choose Select > Similar. Then I select my base render layer and hit Ctrl/Command and the J shortcut key. This creates a new layer on top with a copy of this selection. I give this layer a Soft Light blending mode.

Next, I address the color difference between the face skin and body skin. Again, I use the Surface ID render output to select the body skin part and use that as a mask for a Color Balance layer.

I then realize that /My Kiwi Friend/'s lips should be a touch shinier. So I do a quick Region render in MODO of only the lips region with a higher specular amount setting, and lay that on top in Photoshop. 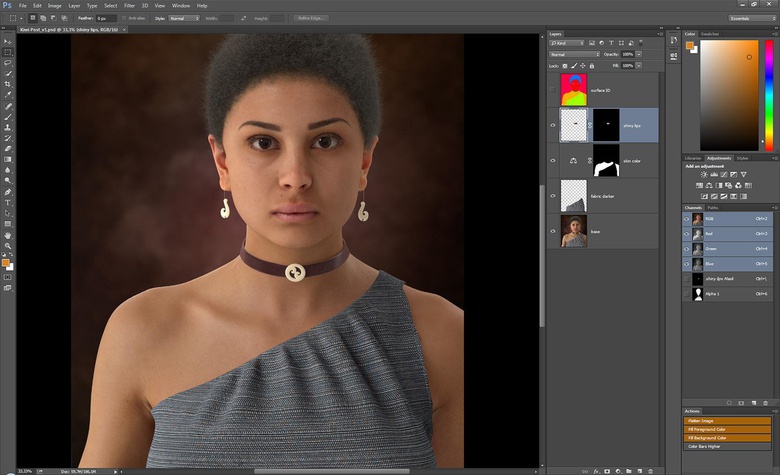 Next I use my other Render Outputs to take this image to the next level. First, the Ambient Occlusion is applied at 33%, set to Multiply. Then I mask out the parts of the face that I find a bit too dark.

I then apply the AO again, but only where the cloth meets the skin, which is also done with a mask. Next the two illumination outputs (direct and indirect) are applied at 22% with a Soft Light blending mode. This technique gives the image an attractive richness when it comes to the lighting. 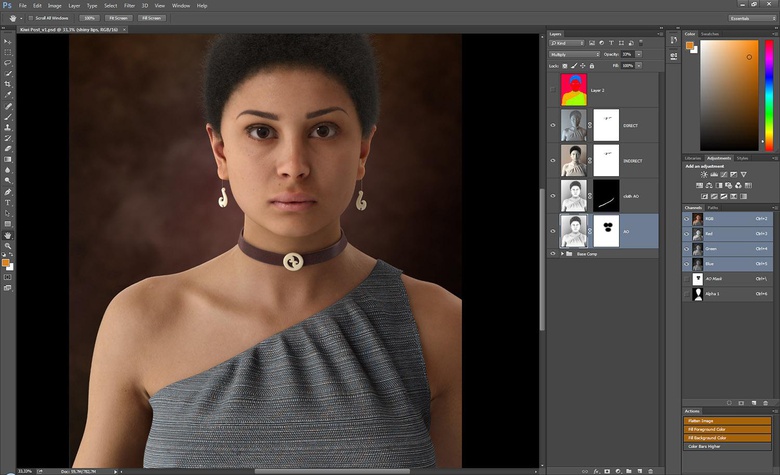 I just love this part… everything comes together

I apply a subtle depth-of-field (DOF) effect by using my Depth render output with the Lens Blur filter. I then jump to Magic Bullet Looks to apply a subtle Chromatic Aberration effect.

Finally, I like to add a Max Diffusion filter, which is a combination of Contrast/Saturation/Curves/Diffusion effects. This output from Magic Bullet Looks is quite extreme, so I apply it at only 10% with the Soft Light blending mode, but it does give a beautiful warmth to the final image. 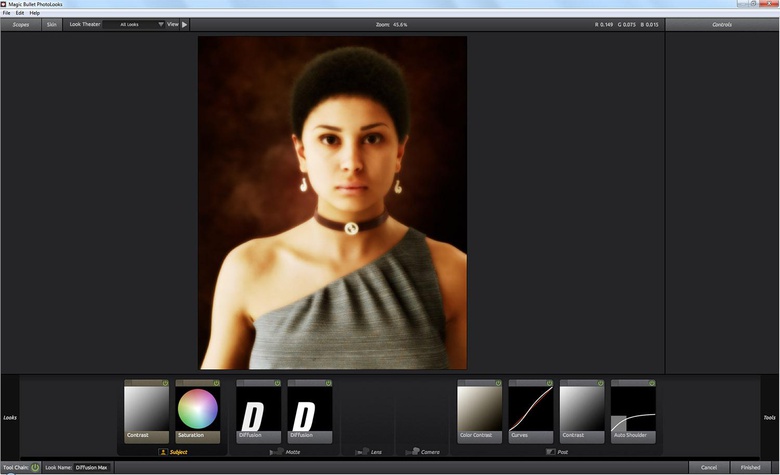 Magic Bullet Looks has a great set of Presets, but you're free to create your own Looks from scratch with a wide range of controls! 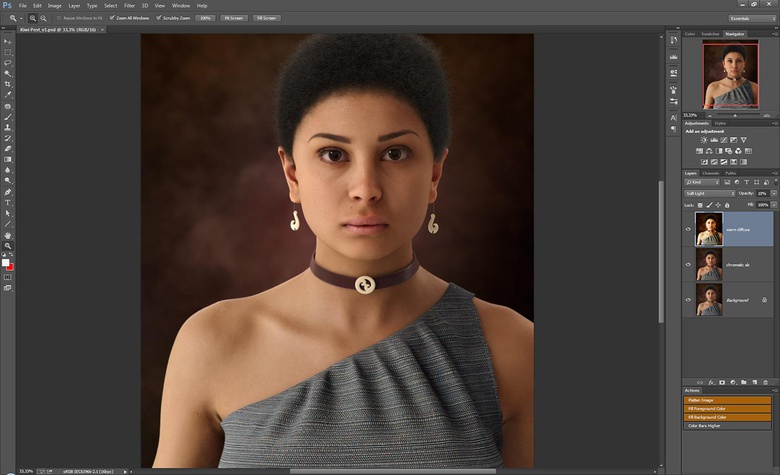 Subtlety is key in post work. A layer opacity of 10% might seem low, but here it does the trick

Using HDR Light Studio, you can light your shots by placing light and reflections directly onto the 3D view – with a dynamic HDRI map generated on the fly. This revolutionary lighting technique allows 3D artists to light their shots faster, and produces stunning final renders.

To complete this tutorial series, here is a video covering all the stages we have looked at over the last 4 tutorials. My Kiwi Friend has been created entirely using an AMD FirePro™ W9000 graphics card.