Discover top MARI tricks! 3D Artist Bert Heynderickx - aka Alberto Ezzy - reveals the creation of perfect image maps needed for texturing the skin of the face and body, as well as cloth 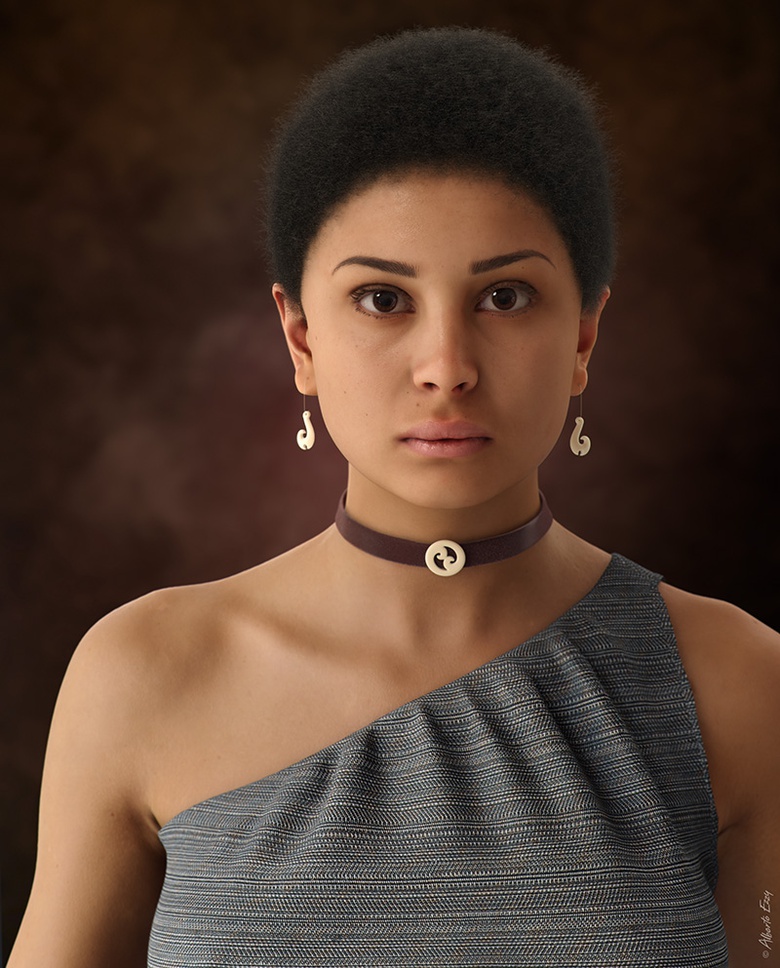 In this part of the tutorial series, we'll take a look at creating image maps for this female 3D portrait

Discover top MARI tricks! 3D Artist Bert Heynderickx - aka Alberto Ezzy - reveals the creation of perfect image maps needed for texturing the skin of the face and body, as well as cloth

Read the first part of this tutorial: Improve your geometry in MODO

In the last chapter, we began our look at the creation of a female portrait, 'My Kiwi Friend', in MODO. In this instalment, we'll discover how to create the various image maps needed to texture our female model, using MARI for the most part, with a little Photoshop as well. I'm continuing work on this figure using an AMD FirePro™ W9000 for the workflow featured, which I personally find very responsive and a pleasure to work with when dealing with high-res character creation.

TIP: As with The Fisherman portrait, some aspects of the creation process will be similar, so be sure to check out my earlier free tutorials for more in-depth tips and tricks.

To start this part of the tutorial, I want to show you the diffuse image map that came with the head model used for this project from Ten24: 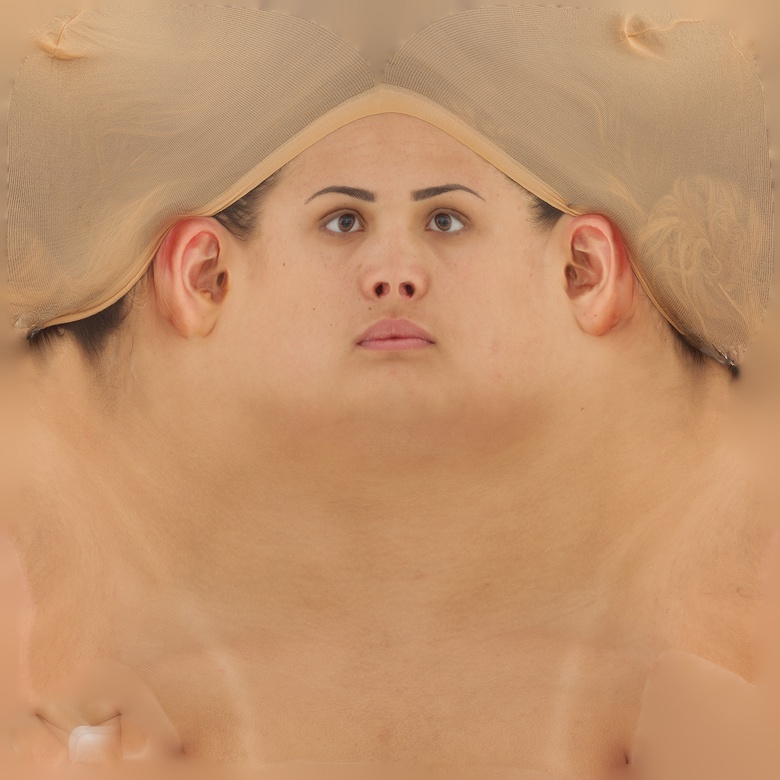 Using a state-of-the-art, optical 3D-scanning rig, Ten24 is able to capture full-color, 360-degree head scans with a 3D point accuracy of up to 0.1 mm

Before we derive the other maps from this one, it's important that the cap border is painted over so that it's no longer visible. So let's jump into MARI now to do that...

With the OBJ model loaded, I right-click on my Base Color layer and choose Import > Import into layer and select the base image map. To be able to import images into MARI, the file has to have a certain naming convention. So you will want to rename it to something like 'Skin.color.1001.tif'.
I can then select the Clone Stamp and clone the skin over the cap border and hair. 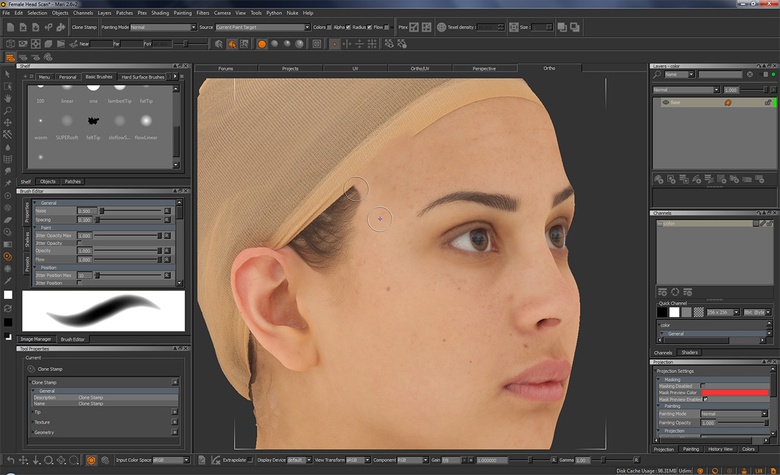 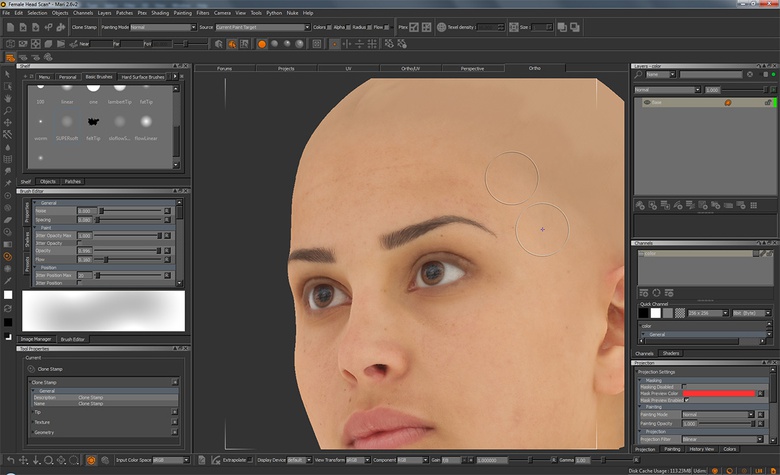 We now have a clean canvas to grow hair from...

Step 2: Correct the reflections in the eyes

The only other things that I found needed to be changed from the scan were the eyes. This is because they reflect all the DSLR cameras used to capture the 3D portrait - which are of course needed to capture all the details, but they don't fit the scene that I want to place my 3D model into. So I instead look for an image of dark brown neutral irises, and lay them over the old ones. You can see the difference here: 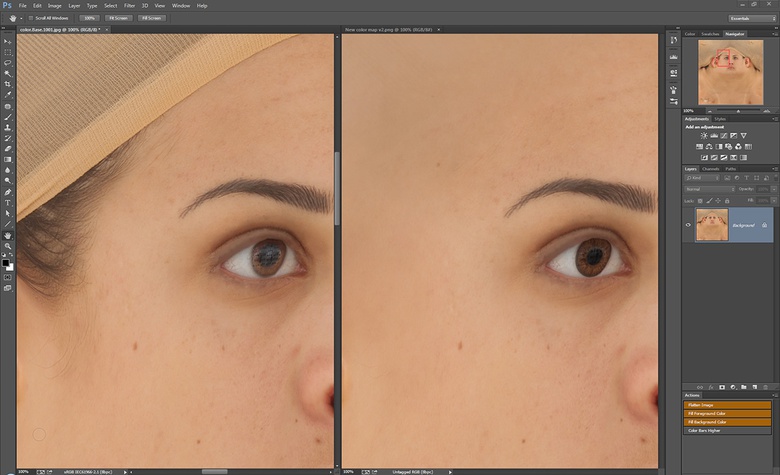 The eyes of the base image map before and after retouching

To make the other face image maps of ‘My Kiwi Friend' in MARI, I recommend reading part 2 of The Fisherman tutorial for an in-depth guide, as the process is exactly the same for both portraits. Here you can see an overview of the different maps needed for the Skin Shader in MODO: 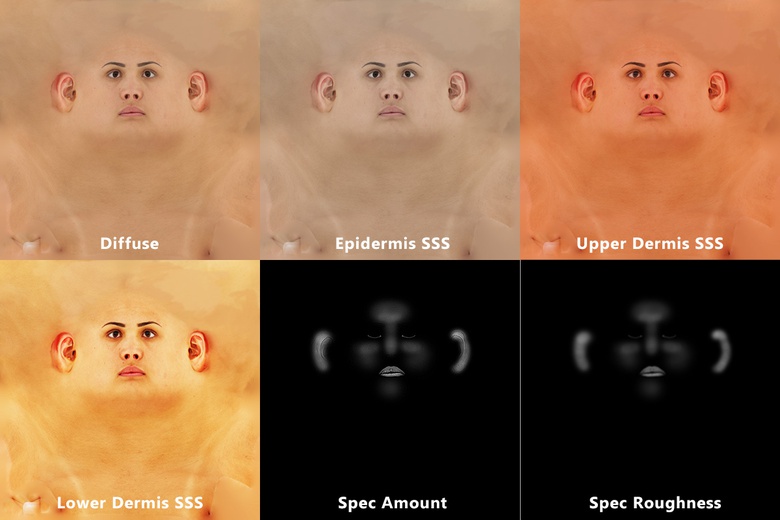 Rather than focusing on the head - as we did in The Fisherman tutorial - let's take a look at the image maps for the body model here, which is separate from the head, as I showed you last week.

To keep things organized, I copy the Color Channel in MARI and rename it ‘epidermis'. Now I need to desaturate the base Diffuse Color map. So I add an Adjustment Layer and choose HSL (Hue-Saturation-Light). I lower the Saturation to about 0.650. Next I add a Layer Mask and, with black selected as the color, I paint a mask to recover a bit of Saturation on some fleshier parts of the body. This helps to get some variation and avoids it coming out looking too flat. I like to use the Super soft Brush Preset for this kind of work.

The only thing left to do now is to export this result as a flattened image map for use in MODO. So right-click on the ‘epidermis' channel and choose Export Flattened/Export Current Channel Flattened. 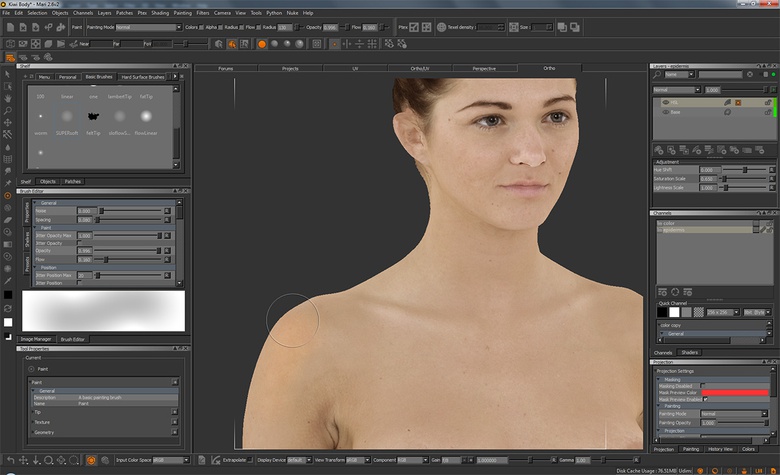 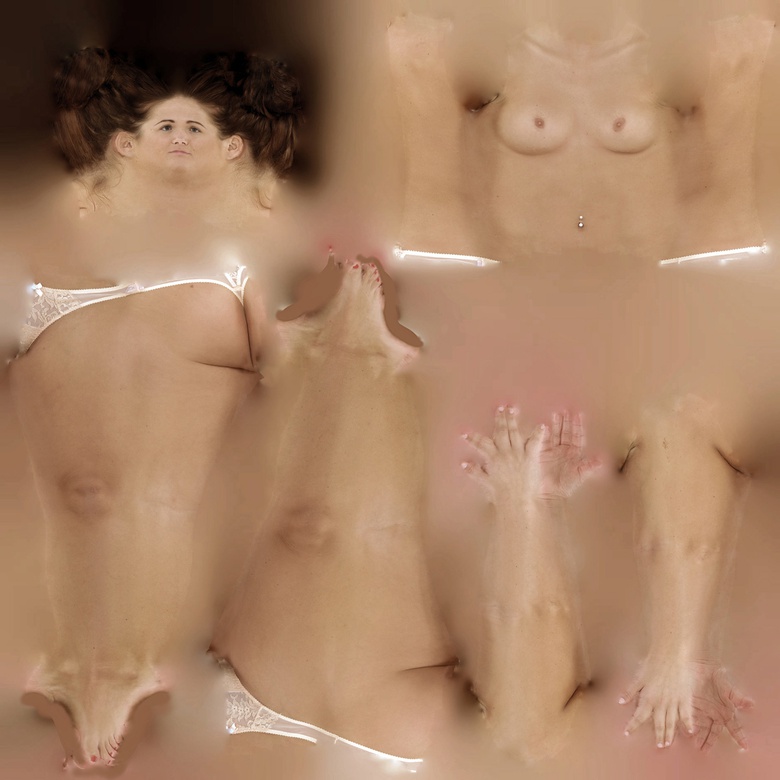 The Epidermis SS Color Map for the body exported from MARI

Next, let's make the image map for the Lower Dermal layer. I copy the Color Channel, which holds our base, and rename it ‘lower dermis'. This map has to have some quite increased contrast. This is achieved by first adding a Contrast Layer and increasing the value to about 1.700. The levels of this result are slightly changed with a Levels Adjustment Layer. Then I simply export again. 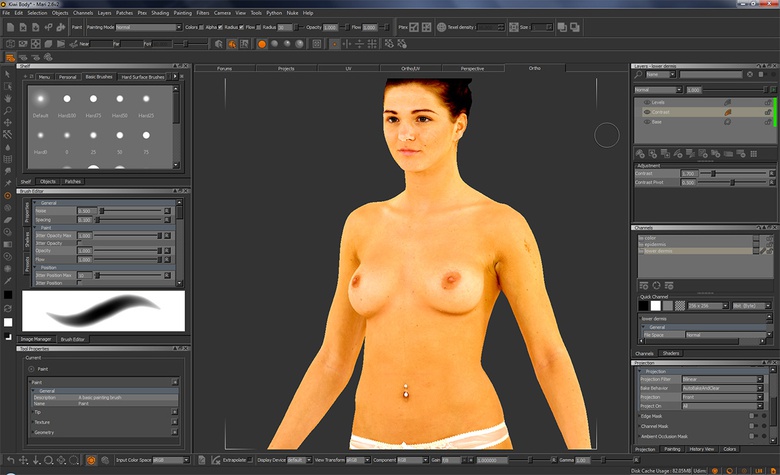 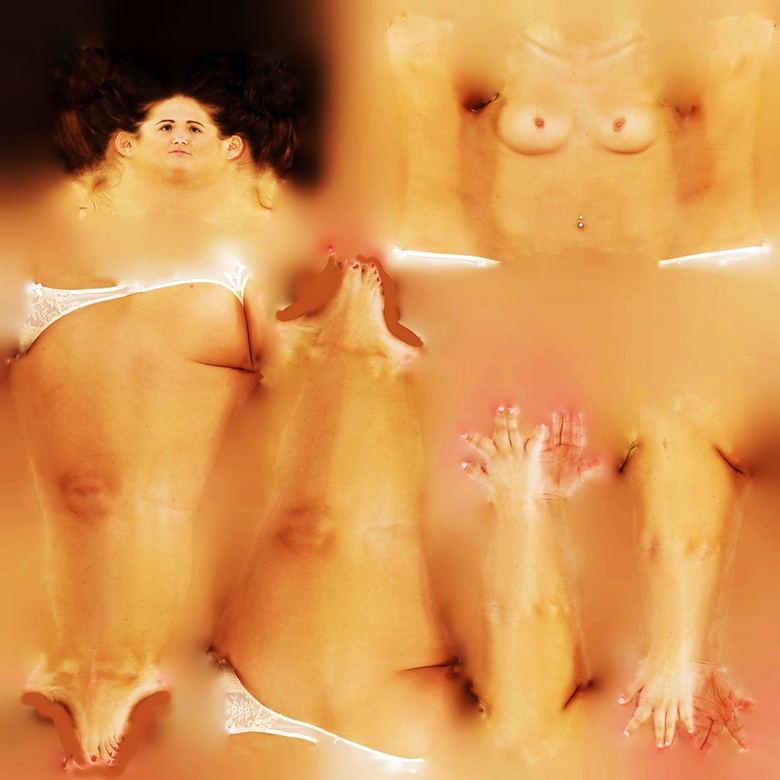 I copy the Color Channel in MARI and rename it ‘upper dermis'. This map has to have a nice fleshy pink tone and some increased contrast. To add some contrast to the base Diffuse Color map, I add a Contrast Adjustment Layer and set it to about 1.350. Next I lighten the map a bit with a HSL Adjustment Layer at 1.200 for the Lightness Scale slider.

I then add a fourth layer and change the Foreground Color to a fleshy pink and fill the layer with Patch/Fill/Foreground. I set this color layer to Multiply at 0.500 to combine it with the underlying layers. Then I export again. 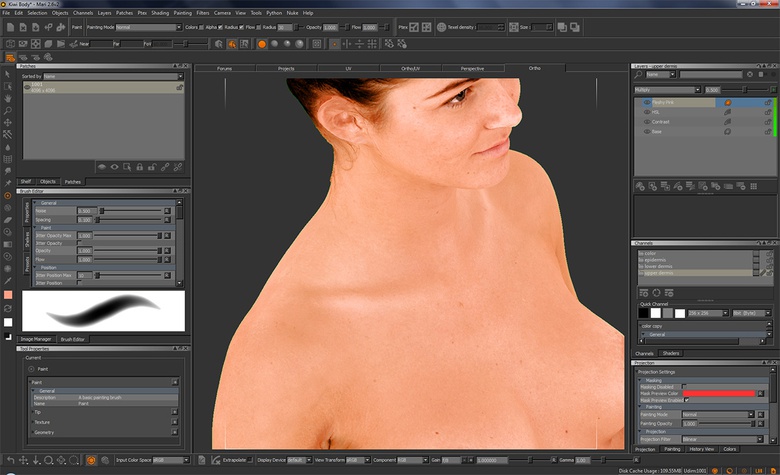 The upper dermis map gets a fleshy pink tint 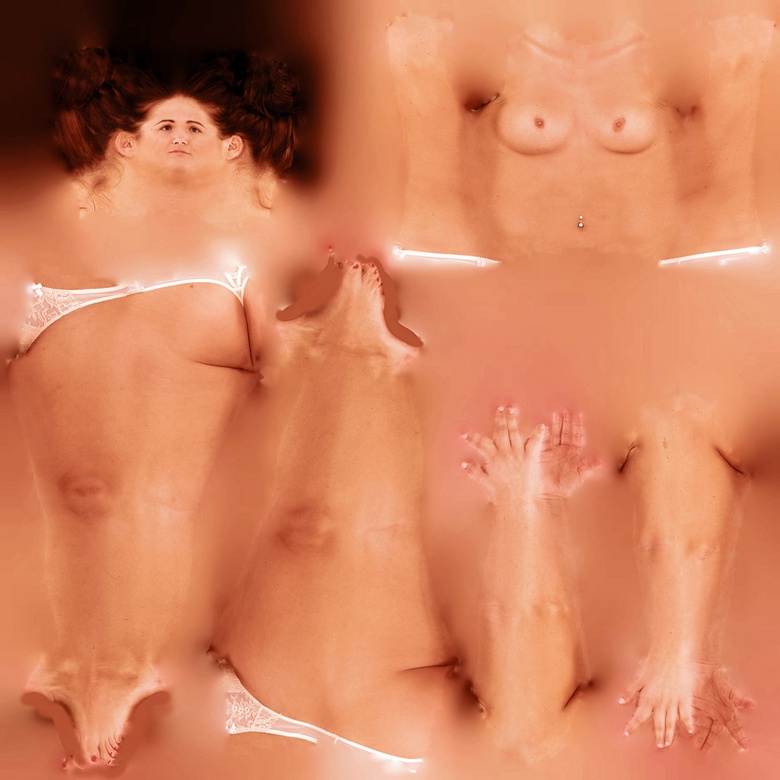 We'll next make the Bump map. A few weeks ago, we created a bump map for The Fisherman's skin. So let me show you now another approach that also works a treat!

On a desaturated version of the base color map, I apply a High Pass Filter with a value of around 10 (Filter > Other > High Pass). Next I apply a very extreme Curve Layer to bring out all the details, and a Levels Layer to increase the Lightness (please refer to the screengrab below for my specific settings). 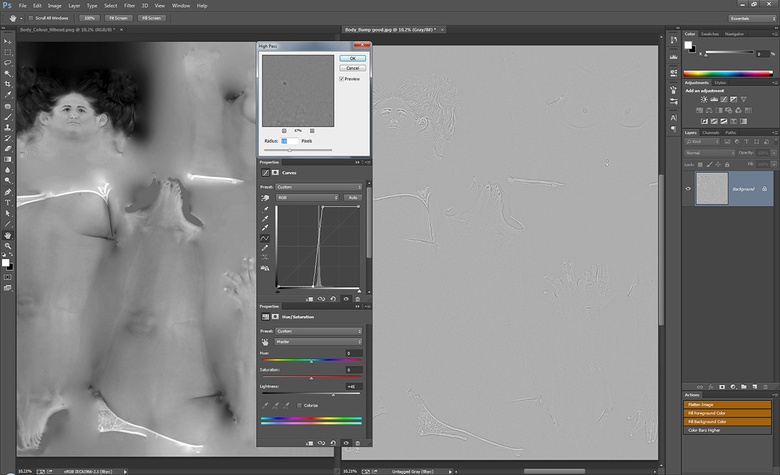 A scanned model from Ten24 is delivered as an OBJ and a ZTL file. From the ZTL file, you can extract a Normal map in ZBrush, and export it for use in MODO. This Normal map has all the fine detail that was originally scanned, such as pores and irregularities in the skin. When we apply the Normal map together with the Bump map later on, we will get some really intricate skin details!

Because the specularity of the body is very even - as opposed to the face - I don't see the need to create a special map for this. We will drive the overall specularity later on in MODO within the Skin Material... 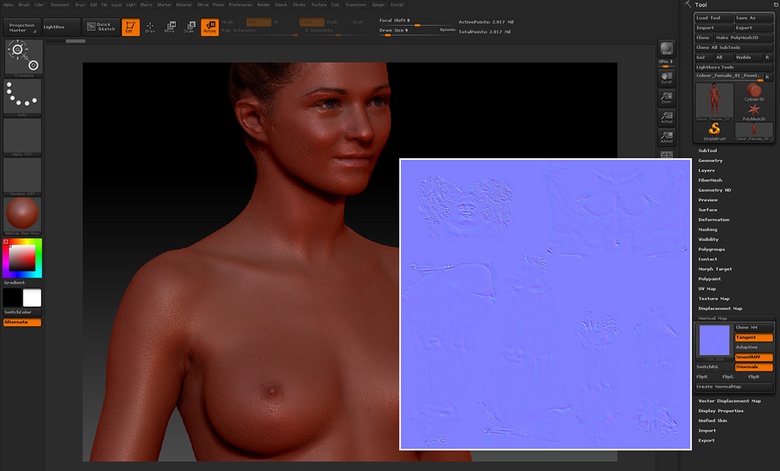 For the Normal map, we take a quick trip to ZBrush

We also need a map to control the density of the hair in MODO, because I don't want the transition along the hair line to be too harsh. So let's create a map that will make the hair less dense along this hair line. To do this, I jump back into MARI and paint a grayscale density map. 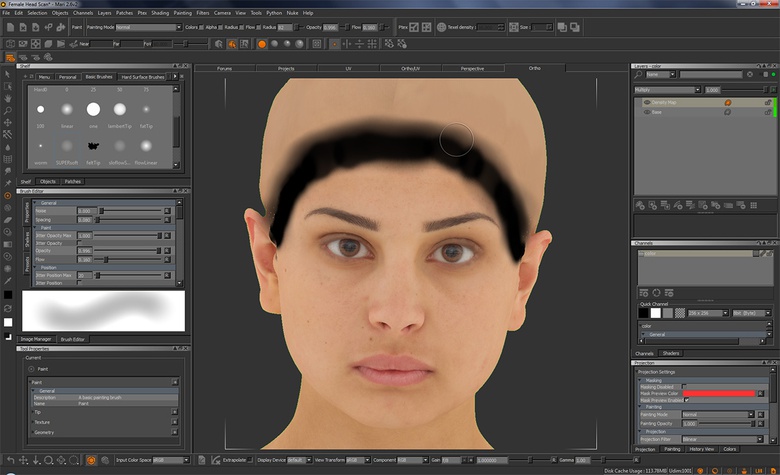 Painting in MARI gives an excellent 3D feel and feedback!

The cloth texture maps took quite a few tests before they felt right. First I tried a warm brownish color, but it felt more 'Safari' than 'Kiwi'. Next I tried more Maori line art as a print on top of a fabric texture, but that was too visually distracting... I ended up with a subtle combination of these two tileable fabric textures (please refer to the Top Tip at the end of this tutorial). 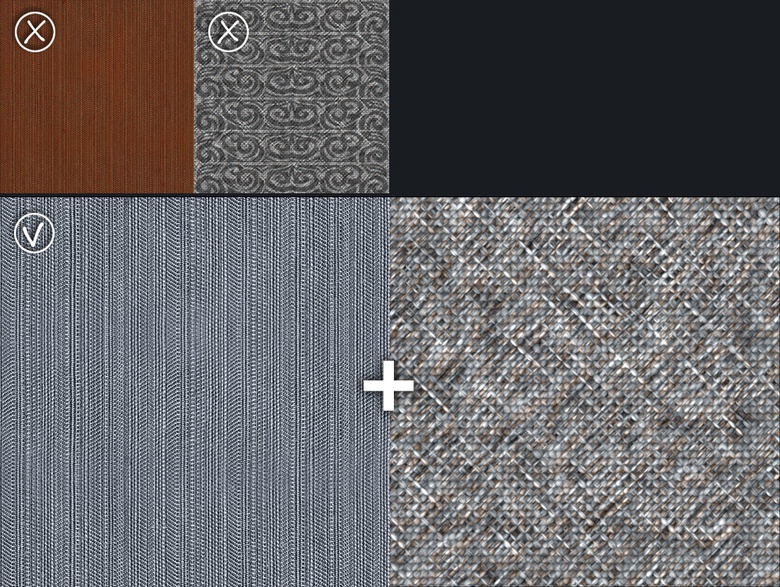 And that's it for this part! We have 2 parts left to take us to the final render, so stay tuned for the next instalment, coming soon.

AMD FirePro cards have varying amounts of raw horse power and memory fitted to them. Some applications like to use lots of compute power - like NUKE, for example, which can do graphics processing and compute functions like visual effects, deburr , depth of field, and so on. As long as there is a reasonable amount of GPU memory then it's good using the GPU to do the compute!

MARI, on the other hand, wants to keep as much information in the GPU memory with big materials and textures all stored in the GPU memory, so that you can edit them quickly. Whenever an application has to go back to system memory there is a "round robin" of a few milliseconds that can slow the feel, so The Foundry makes use of the GPU memory well to counter this!

There are times when there is no choice but to go to the system memory, so this is where having a fast bus or connection from the main board to the GPU is important! All FirePro cards come with PCI-Express Gen3 connections to make sure you achieve the fastest connection possible. Of course, having faster RAM on the GPU when accessing the information helps, so from the middle range up, AMD employs GDDR5 memory - the quickest available to do this!

How do you pick the right graphics card?

Well, the higher the numbers, the faster the GPU, and the more memory you have. The AMD FirePro W7100 is a great new card as it has a fast new GPU, reasonably large GPU GDDR5 memory, with 8GB with PCI-E Gen 3. It's not the top of the range, but comes at a very reasonable cost. 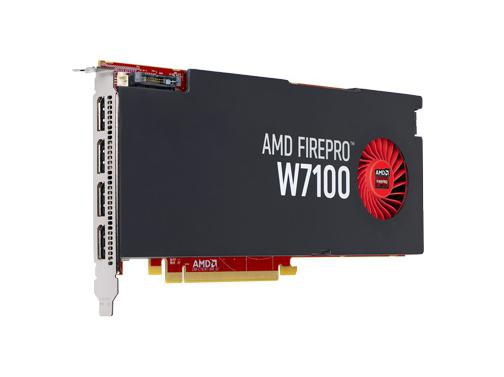 I wanted to share a great little resource with you for creating nice tileable patterns and textures. I always visit webtreats.mysitemyway.com - it's a fantastic resource that I always check out when it comes to this kind of work!