Making Of 'The Nature of Man' 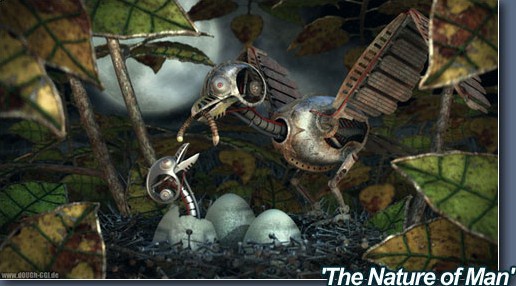 This scene was made using Lightwave for modelling, Photoshop was used for the textures, background image and post work. FPrime was used for final rendering.

My intention for this image was to make a very natural scene, but with artificial objects and characters. So I decided to make a scene, where a robotic bird feeds his robotic child with a robotic worm. They sit in a nest made of screws and nails. The surrounding plants are made of metal, too - painted in green tones to look "real". 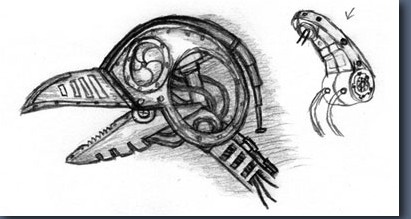 First I drew all the parts of the metal-bird on paper. That one bird serves as the big bird, and as the child. My drawing is usually not very precise when made for myself. It is just detailed enough to focus on the difficult parts of my object. Because my object consist of many independent parts, it was also necessary to get an idea of how the parts are attached to each another later.

Modelling was quite boring, because there was not much of a challenge besides getting finished in time. I mostly use the point by point method, the resulting low poly model is converted into subpatched version. Then it is refined and details are added.
I started modelling with the head, created the sides of the head first. Very few four-sided polygons were needed to shape the side. "Thicken"- plugin was used to turn the flat shape into a thick surface. An UV-Texture was applied for easier texturing. After subpatching, low poly bolts where placed along the edges of the sides.

All the parts were made the same way - first the big parts, then parts to connect the several big parts and to close the holes - then the smaller parts inside like cables, springs and other stuff. Some parts were made by solid modelling, but not only the small, almost unseen parts. The wings of the bird consisted of simple solid forms, too.

After the bird was completed I made the nest. I had no Idea how to make it look real, so I had to experiment a bit. I made one screw and one nail with the use of very few polys. Then I made points in the shape of a nest with the Spray Points tool. I tried to use particles to clone these nails and screws, but found it to circumstantial. I ended up reducing the points to a very low level, then using the modellers tool "Point Clone Plus" to get a very nice result.

This object was then cloned and rotated in Layout to make the nest denser. The final nest consisted of three copies of the object.

The rest of the holes were closed by a simple textured form representing the nest. The transparency was controlled via an alpha-map. The Texture was created in Photoshop - a rendered image of the nest was duplicated to make a seamless texture. 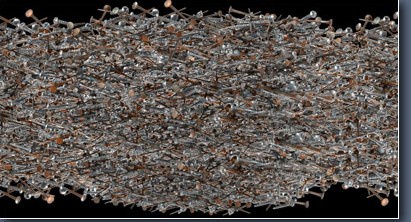 The plants were easy. One leaf was modelled, a UV-texture was added, the leaf was cloned along a branch, then they got different materials (3 different leaf typed were used). To make it look irregular, the leaves were modified a bit, stretched and bend in different directions.The complete branch was then cloned in Layout and placed on the bigger branches. Single-Leafs were cloned and placed in front of the camera and behind the nest.

At first I textured the bigger parts - the side-parts of the head, the bill and the side-parts of the body. I used self made photos of rusty metal objects (from a metal cargo-container), rusty textures from various sources and mixed them together in Photoshop. The Textures for the leaves were composed with pictures from real leafs, painted and composed with pictures from rust. I used only one color-map, and one bump-map which served as a specular-map as well. The bump-map was the black and white color-map with different contrast (mostly because of timesaving). 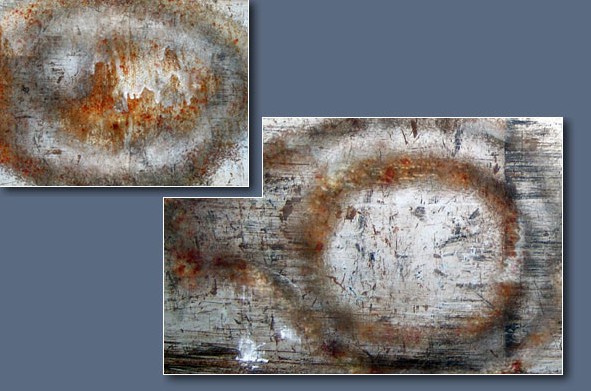 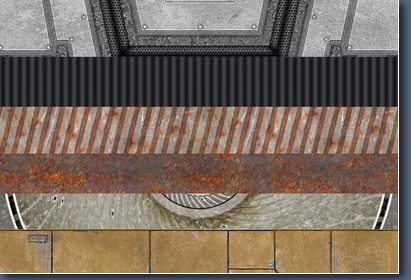 In some materials the specularity is controlled with a gradient with the input-parameter set to bump. All other parts of the objects, the wings, legs, eyes and so on were textured with the images of the "Total Textures v7". When you have a lot of materials in a scene - mine had over 50 different materials - it is a big help not to create every texture on your own.
Additionally to the images, procedural maps where used on almost every material to make it look old and rusty.

At first I made a test render with fprime. For this image, I painted the background in Photoshop. Everything had to be very blurry since I wanted to use DOF. An Image of the moon was composed with some of the space-images from Total Textures, painted clouds, painted sticks and a photo of the wood.
This background image was used for the final render. Rendered with radiosity, the image served as illumination for the foreground. Two lights were used to simulate the spotlight for the camera and to lighten up the birds and the nest.
It was important to use the finished background-image for the render because of the DOF. If the color of the background while rendering is different from the background-color in the final image, the blurry parts from the foreground can have ugly edges that are difficult to remove.

The final image was composed in Photoshop. Colors were changed, and filters were added. Some more details were added, too.

I hope this was of any interest for you. If you have any question, feel free to contact me via my homepage.