Making Of 'The Fallout'

This character was inspired by a creation of Jeff Simpson. You can check his original concept here: http://www.surrealsushi.com/fallout.html. The first time I saw this image, I stopped and stood there watching it for a while. Its details and atmosphere really attracted me, so I instantly knew I had to create a 3D version of this guy.

It also caught my attention because it reminded me of the past when I loved watching Mad Max, and also reminded me of more recent post-apocalyptic movies like The Book of Eli.

I wanted to achieve the mood of the worlds within these movies in the final character: old, worn and destroyed, with scarce objects that the character could grab during his journey through a desert world.

There were seven main stages for this character:

1. Sketching in ZBrush
2. Retopologizing in Max
3. UVs in Max
4. Sculpting details in ZBrush
5. Textures in Photoshop and Mudbox
6. Posing and rendering in Max
7. Compositing in Photoshop

I started sketching the whole character in ZBrush. The main reason for this was to have the proportions, posture and pose set right. It also meant I could have slightly detailed props, which I could export to Max and then remodel/retopologize them with proper edge loops when needed.

First I posed and sculpted the desired body proportions and posture I wanted using the SuperAverageMan model that comes with ZBrush (Fig.01).

After that, there were basically two ways of modeling props: one, using ZBrush's Extract function (Fig.02) and two, using base models imported from Max (Fig.03). The exceptions to this were the head that I modeled from a DynaMesh sphere, the knife that I started from ZBrush's ShadowBox and the pockets, which I made from a box. 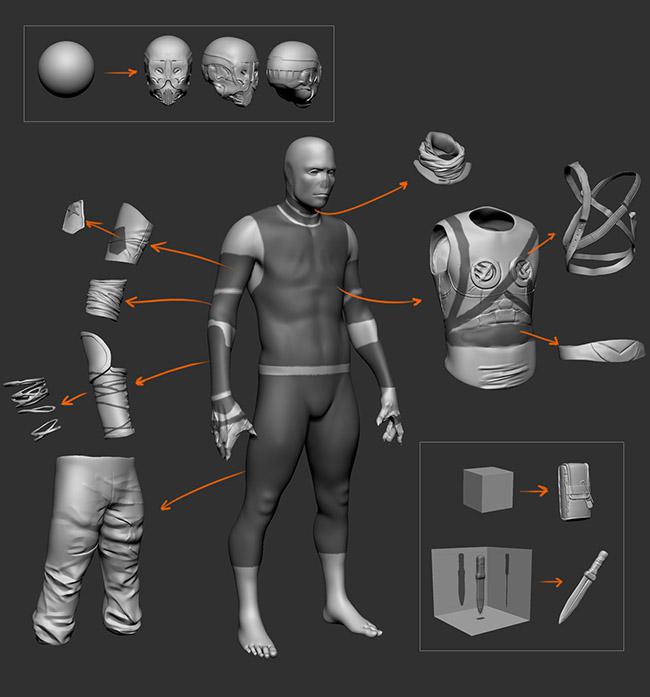 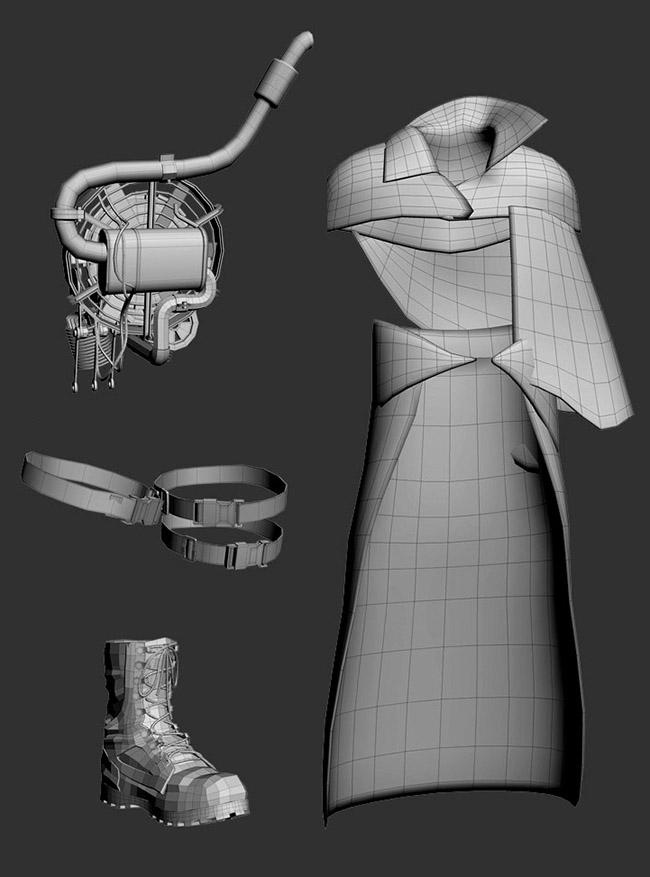 And here it is all together, with all the props detailed enough and ready to be decimated and exported as OBJs for later retopology in Max (Fig.04). 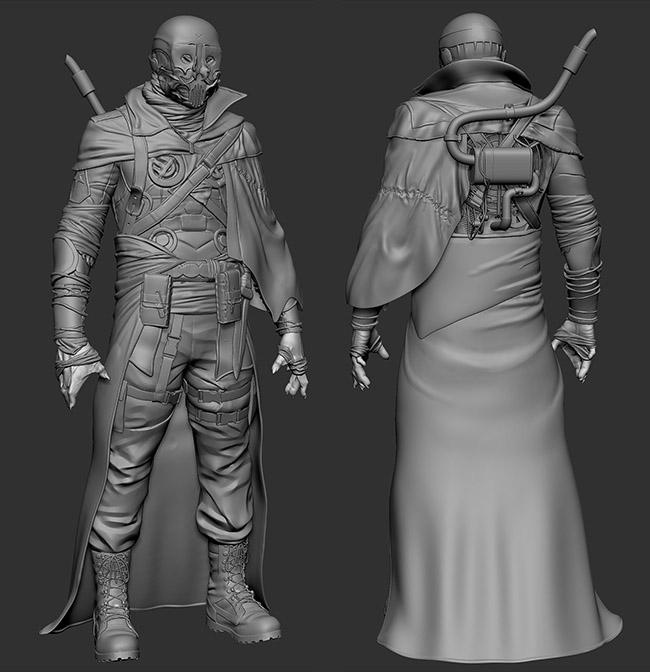 I wanted this character to be of a cinematic level, ready for rigging and animation, so I retopologized him using Max. First I decimated the whole character and exported it as an OBJ from ZBrush, and then I started modeling over the decimated surface using Max's Graphite Modeling tools (Fig.05).

Some more examples can be seen in Fig.06.


Of course this process is used only when it's convenient and easier to model this way rather than modeling from scratch in Max, but a lot of the props were still just modeled the old box modeling way.

And here's the full character already retopologized and ready for UVs (Fig.07 - 09).

The third step was to have its UVs ready. I worked on all that in Max and at the end I separated him into eight UV shells: head, cloths, torso, arms, legs, boots, props and engine (Fig.10). Each one was meant to have a 4k texture.

With the character already modeled and UVs ready, I then exported each of the eight parts as OBJs back into ZBrush, and created a ZTL file for each one for later ZBrush detailing.

Here is where I put some more specific details I wanted for the character, like scratches, rust and prints on the metal; stitches and wear on the leathers; veins and wrinkles on the skin, etc. There are some details I prefer doing later while texturing, like tears (using opacity maps), leather wrinkles (using bump maps) and cloth bumps, etc. I think it's easier and faster to create these kinds of details later rather than sculpting them in ZBrush. The following images show some ZBrush sculpting examples I did for this guy. Head scratches and prints on the metal (Fig.11). 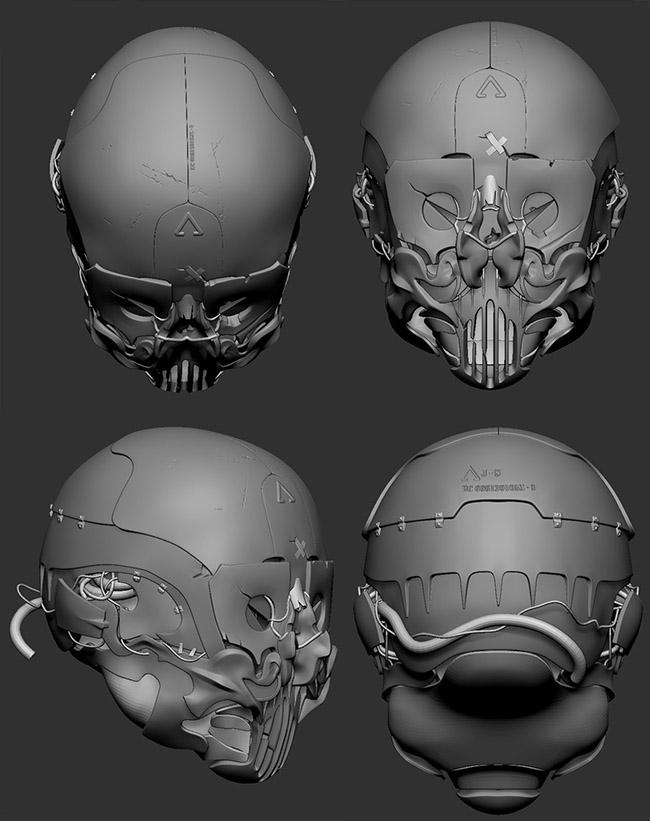 Skin wrinkles and veins, leather and clothing details for the arms (Fig.13). 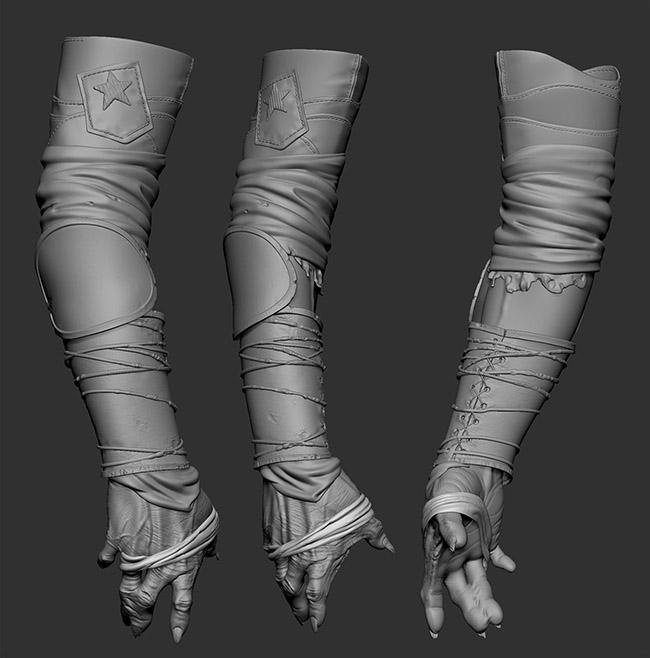 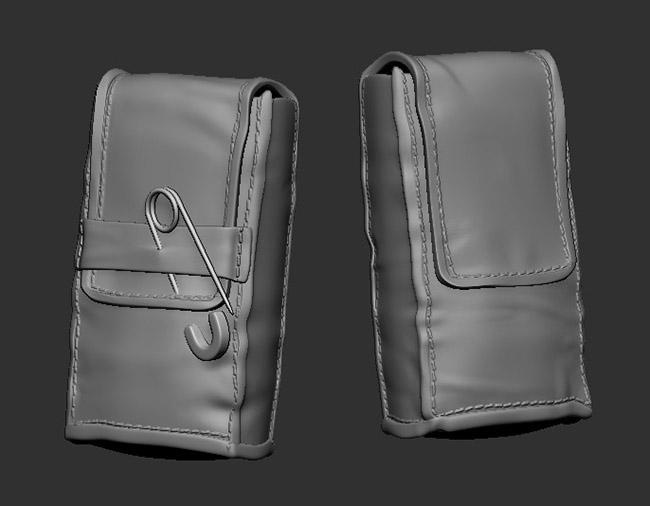 Textures in Photoshop and Mudbox

After sculpting the details, I exported the normal maps from ZBrush to be used later, and started texturing each UV shell in Photoshop and Mudbox.

Below you can see all the UV shells made for this character, from left to right: head, cloths, chest, arms, legs, boots, props and engine. Each one has a 4k sized texture (Fig.16). 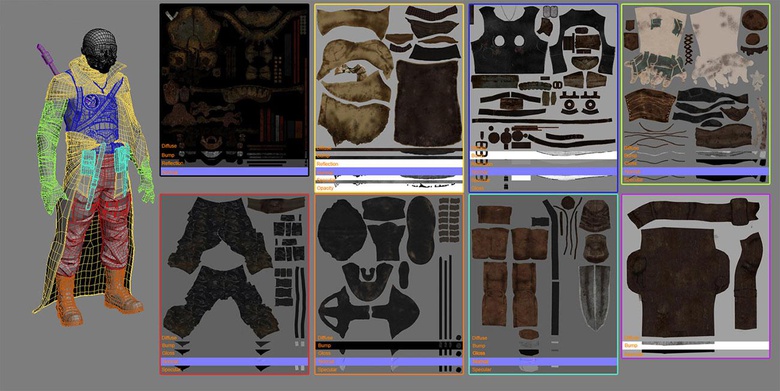 I used a lot of references such as leather coats and vests, rusted and painted metal, worn army boots and pants, stitched and torn leathers, crowbars, etc. Most of the base textures I got from CGTextures.com and for specific details I hand-painted them using Mudbox. For example, the skin tattoos, leather scratches and dirt for the arms and chest (Fig.17 - 18). 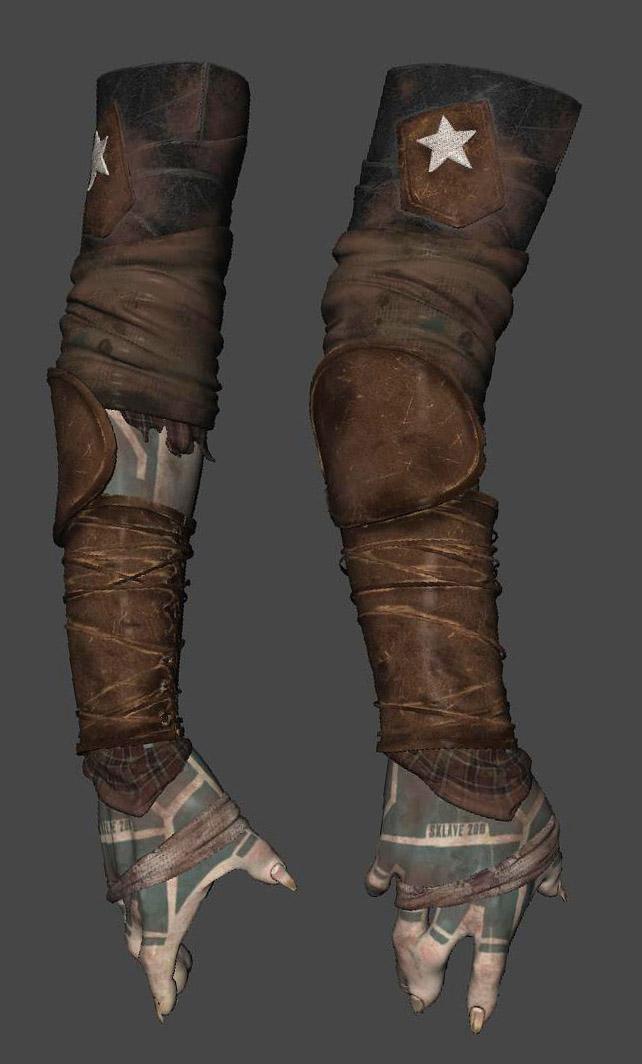 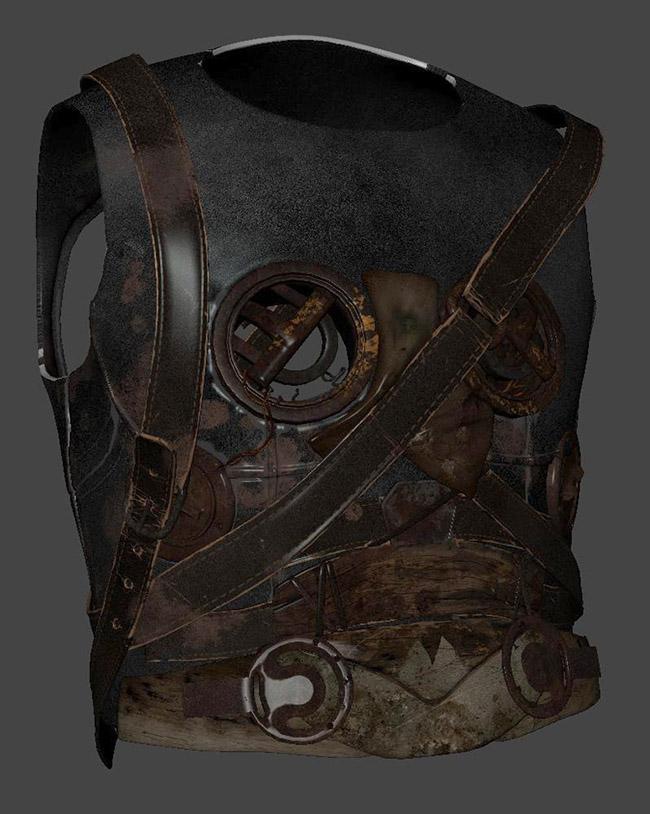 I also used Mudbox to paint opacity maps to make some tears in the cloth and leather. It's cool to paint those because you can see transparency working in real-time (Fig.19). 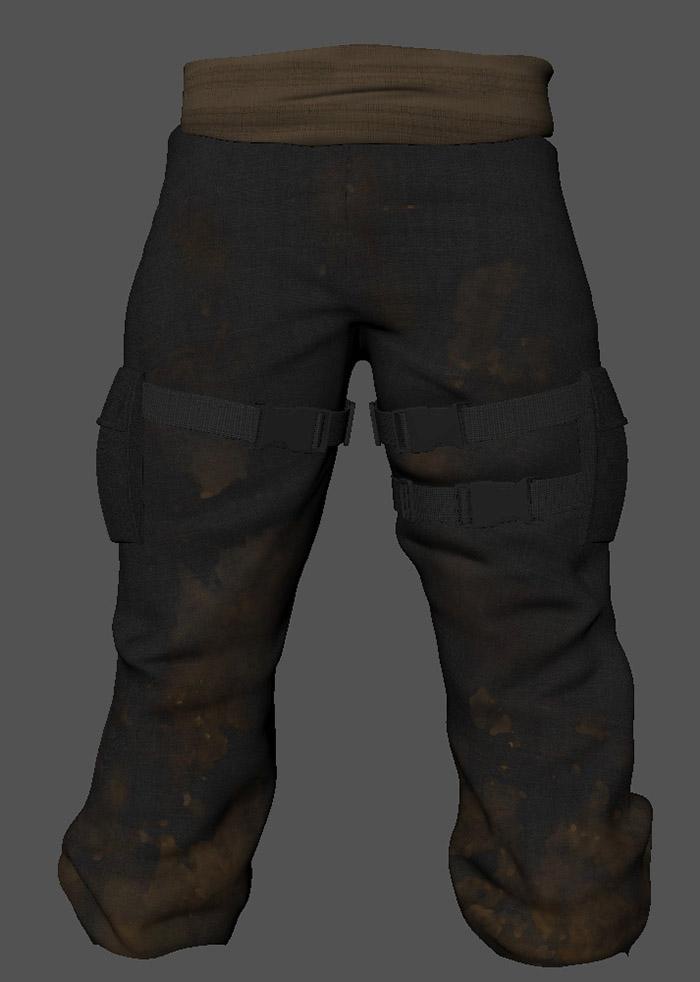 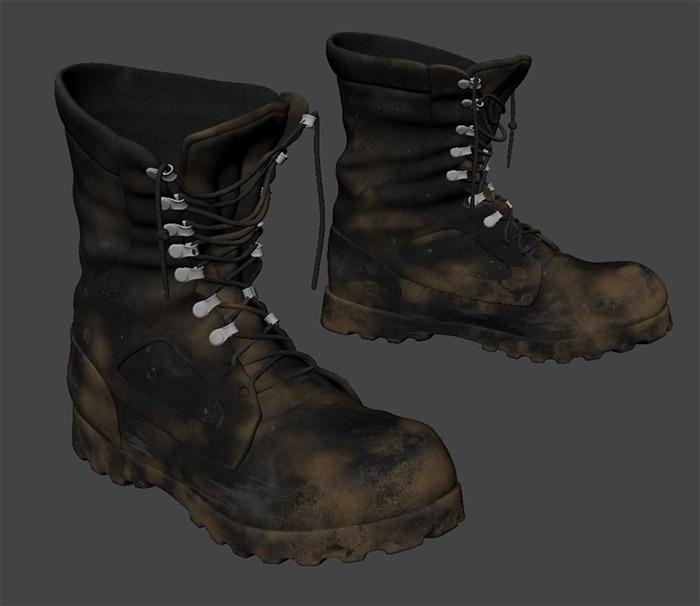 As soon as I was creating the diffuse maps, I was using them to create reflection, specular, gloss, and bump maps.

Posing and Rendering in Max

Once I had finally textured the character, I rigged and posed him using the CAT System in Max. For the render I used mental ray and added two main lights, one as the main front light and one back light for the silhouette, both mr Sky Portal lights (Fig.22). 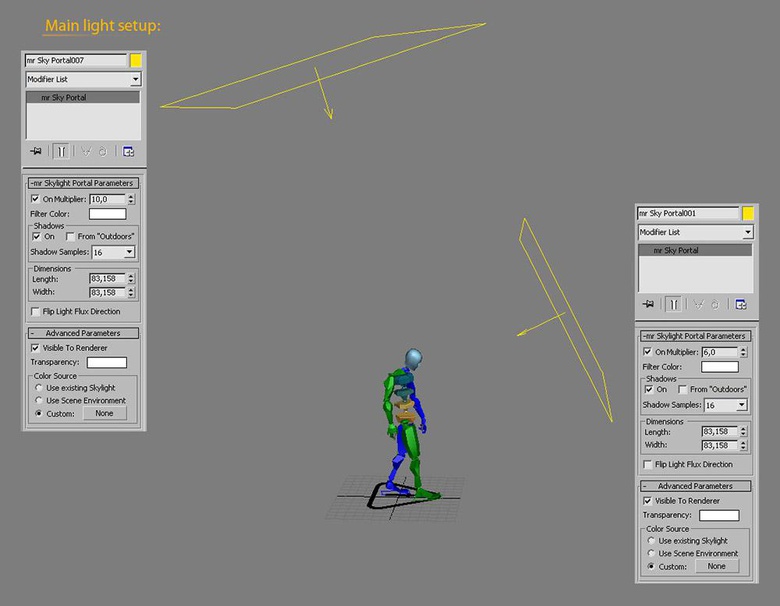 I also made a simple ground for it, as you can see on the final image, with some grass and tiny rocks, and rendered it together with the character.

Besides the main render pass, I did some other passes to help me with the final compositing. I did a contact shadow pass using matte shadow, two rim lights (left and right) to highlight the silhouette even more, a mask and a depth of field pass (Fig.23), which I used together with the Lens Blur filter in Photoshop to add depth to the final composited scene. 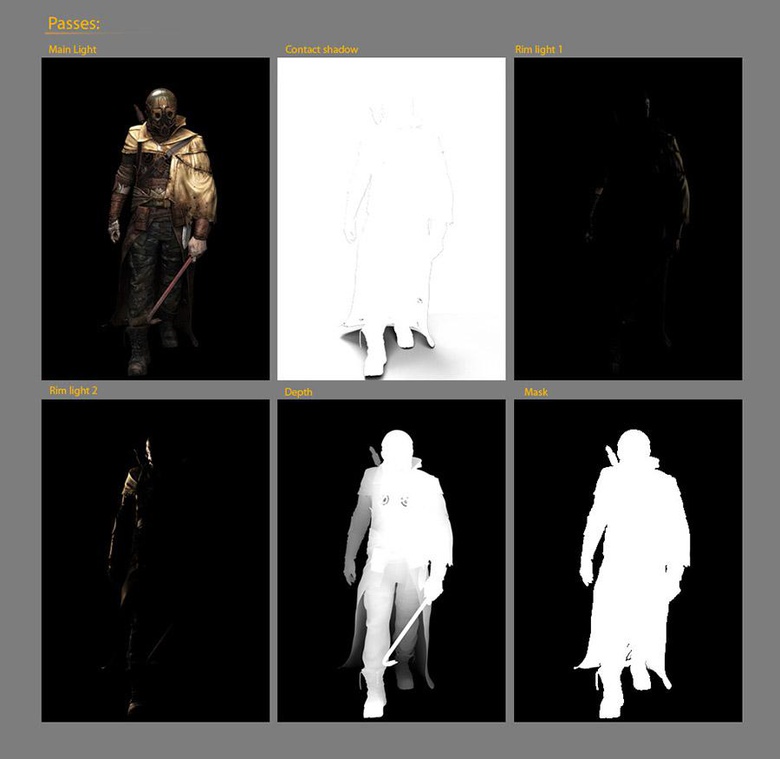 This character was like a real 3D course for me. It helped me realize the stages I'm slower at in a production pipeline, so I can work on them, and it made me think up faster and better ways of doing things. I can't wait to finish a new piece and keep improving my techniques.

I hope you all enjoyed this tutorial and feel free to email me with any questions. Keep working with your passion! All the best, Bruno.