Making Of 'The Diner' 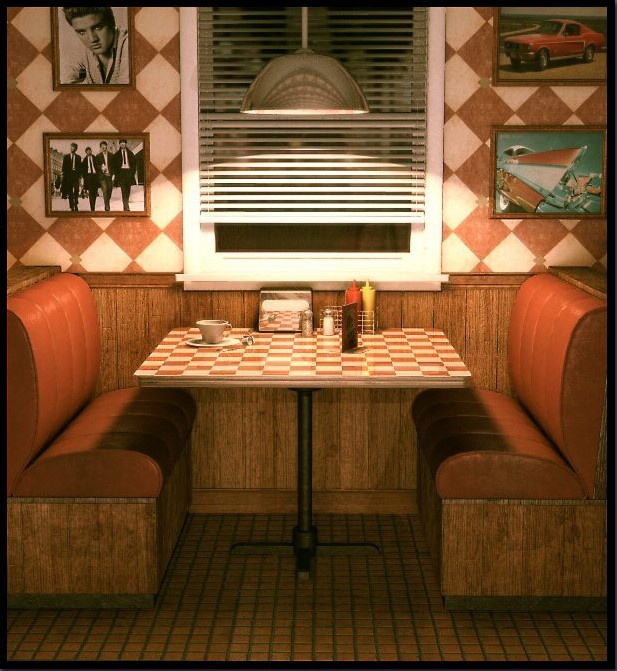 In this tutorial i will give a basic overview on how i made the image "Diner". We will start the journey with modeling, then
texturing, and finally i will explain the lighting setup. Lets begin!

The modeling in the Diner image is really pretty basic. Most of the objects in the scene are derived from rectangles and cylinders. I used a lot of beveling for the stuff on the table like the ketchup and mustard bottles, and
the coffee cup. 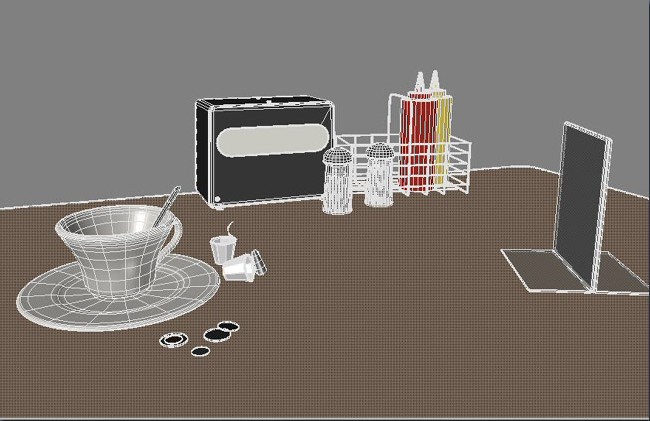 The booth cushions were really the hardest thing to model in the whole scene. I started off by making a spline in the shape of the cushions.

I then put that spline in the background layer, and in a new layer i make some polygons that follow the shape of the spline.
Â 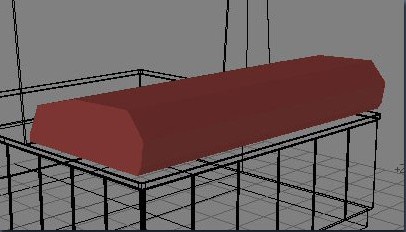 Then, when I hit tab to subpatch it, it fits the shape! After that I extrude the polys out to make the length of the cushion. Then I smooth shift the ends to keep the corners sharp when I hit tab.
Â 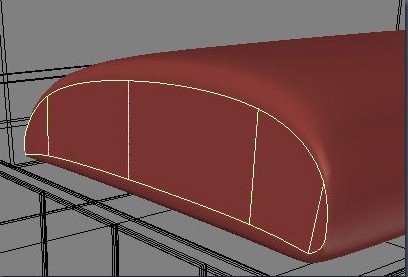 For the seams in the cushions, all I did was use the knife tool to cut a small segment in the cushion (below) and then smooth shift it down. (farther below)
Â
Now were done with the modeling...time to put some textures on this baby!

I have a library of different textures that i've gotten from the internet. I used a lot of those in this image, and also had to go online and find some new ones. All the wood in the render is made by applying the same wood texture image and using cubic projection. 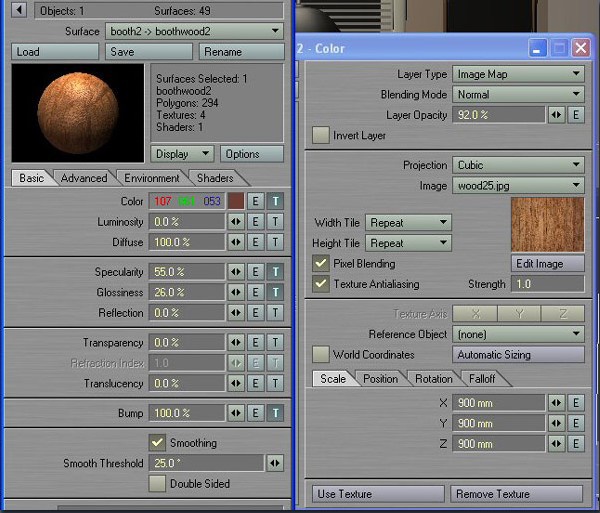 I then added some color variations using the turbulance procedural. I did this in the specular layer and the glossiness layer as well. This added some variation in the specular highlights that gave a touch of realism to the surface. For the bump, I just copied the texture from the color layer and used it in the bump layer. The floor is the same idea, but I used a seamless image map of a tile floor 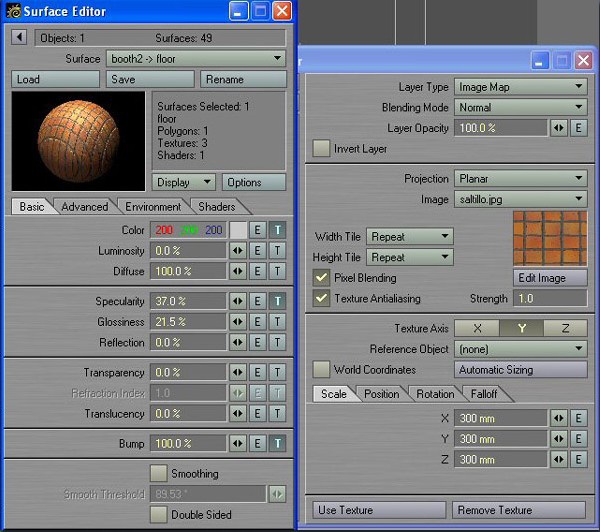 ...still adding the variations in specular and glossiness layers. For the red booth cushions I first picked the right color of red, then added some darker color turbulance to the color channel with a small scale to break up the color. 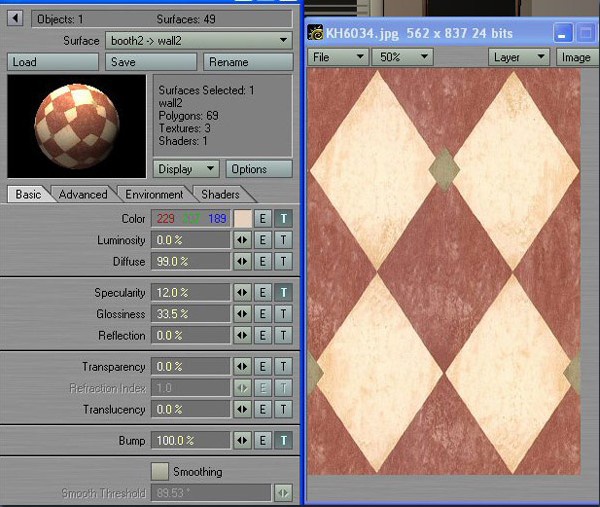 I added a few more layers of different colors, to simulate grease marks, and everyday wear and tear. I then copied those layers and put them in the specular and glossiness layers. Some small bump was added to give it some more variations. The wallpaper is just an image I got online, and I cropped in in psp to make it seamless.(texture4) Same with the pictures on the wall. The table top is just a procedural checker texture. So you can see that my texture setup was really pretty simple. You dont always have to paint and combine a bunch of image maps to get good surfaces. On to the lighting!

Before I set up the lights, I had to decide what my main light source was going to be. Since this was a night time shot, I decided to light the room using the overhead hanging lamp. First thing I did was put a spotlight up into the lamp. 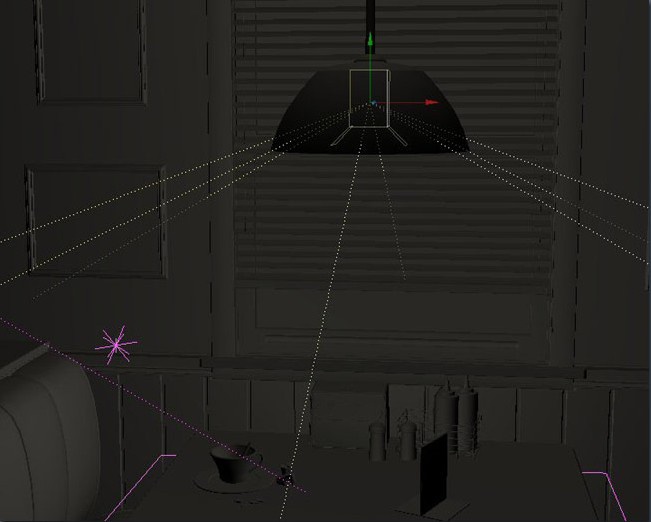 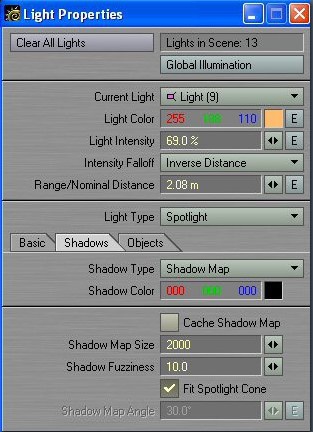 I then set the cone angle wide enough to cover most of the table. I gave the light an orange color, and set the intensity falloff to inverse distance. I decided to shadow map the shadows to give nice soft edges.

Next I added an area light overhead pointing down onto the table. 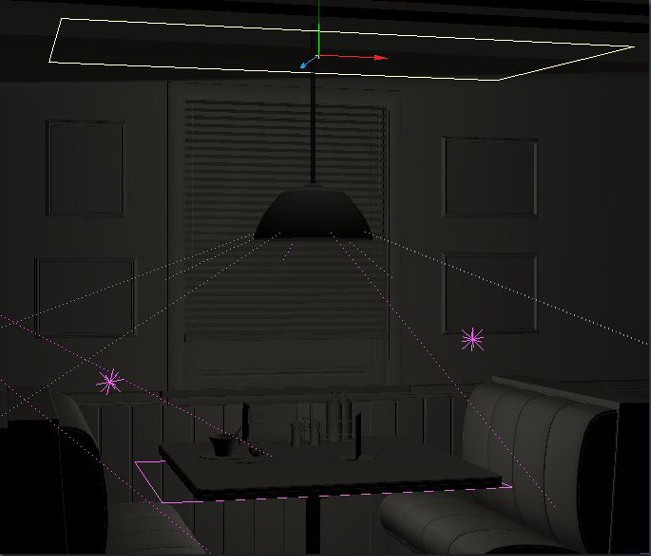 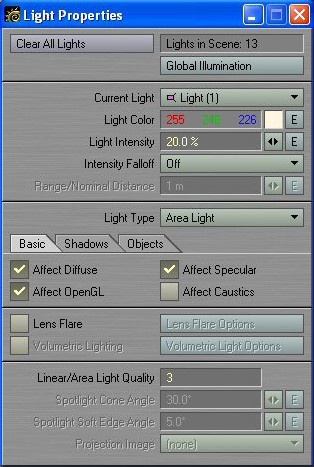 That light has an intensity of 20% and is a pale yellow color. This light helped fill in some areas that did not get hit by the spotlights rays.

After adding that light, the area underneath the table was still too dark so I added another area light directly under the table top pointing towards the floor.
Â 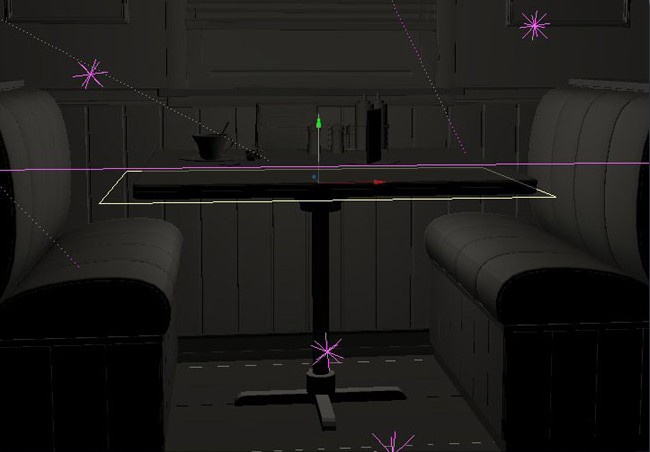 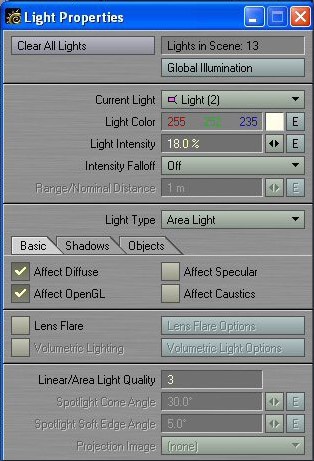 This light has an intensity of 18%. I still needed one more light to illuminate the side of the booth, so i added one more area light directly to the side. (below) 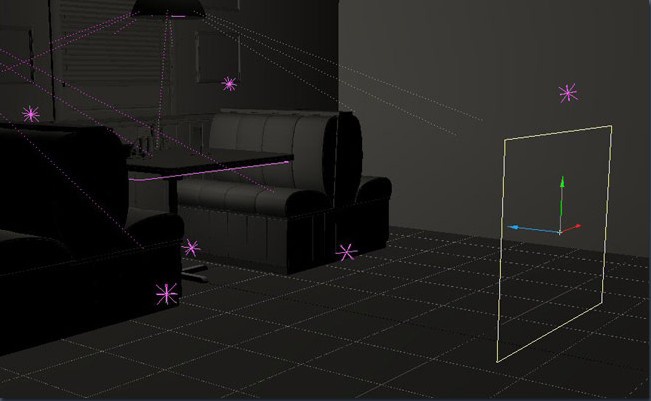 I then used interpolated radiosity to help fill in some areas and create some soft shadows. 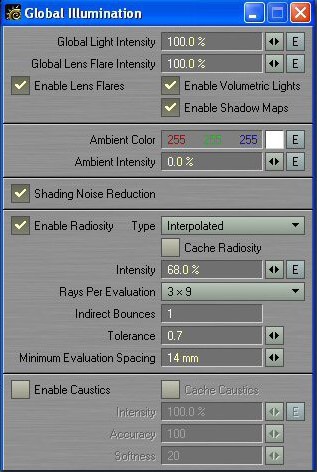 I used an intensity of 68%, 1 bounce, 3x9 RPE, .7 tolerance, and 14mm spacing. Sometimes using radiosity with area lights can create noise in the shadows, so i turned on shading noise reduction to smooth out the shadows. 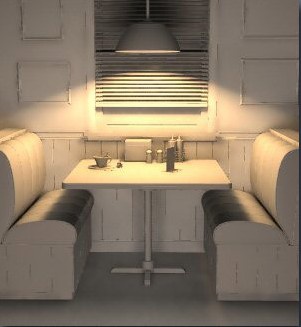 Â
For the final touches, i did a little bit of adjusting in psp....lowered the color saturation, played with the brightness and contrast, and messed with the histogram. Hopefully this overview has helped you realize how this image was made and maybe you learned a little something along the way!