Making Of 'The Antagonist'

Hi! Welcome to this 'Making Of', where I will try my best to explain the choices I made during the creation of 'The Antagonist'.

The goal for this picture was to create a piece called 'The Antagonist', with a horror and science-fiction setting.Â  I already knew I wanted to create a female character with a huge and weird mask.

I started by doing fast sketches to explore new ideas (Fig01 - Fig04). At this stage, I usually listen to some good, inspiring music and just draw until my pages are filled.Â  Appropriate music really helps me to get in the mood of a drawing (it's hard to draw a twisted antagonist while listening to some pop rubbish!)Â  I also search for inspiration related to the subject in some of my many art books.Â  I can spend from 20 minutes to 3 or 4 hours sketching.Â  It really depends on my mood and the level of details I want for each sketch. 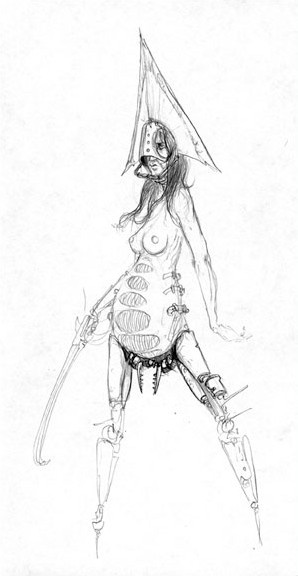 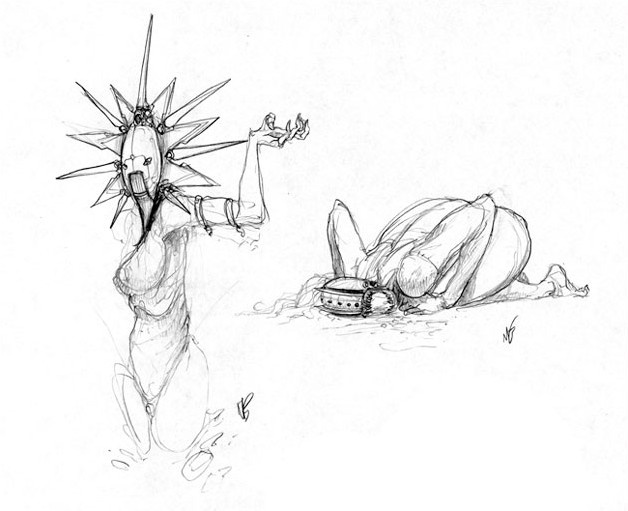 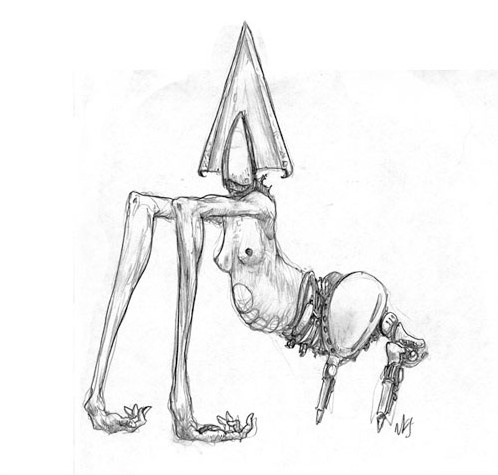 To get the twisted look I was aiming for, I tried to incorporate Freudian symbols into the design; the duality between Thanatos (the death drive, represented by a painful metal mask) and Eros (the life drive; the woman's naked body).Â  After I was done, I scanned in the one I was most satisfied with and started to tweak it in Photoshop (Fig05). 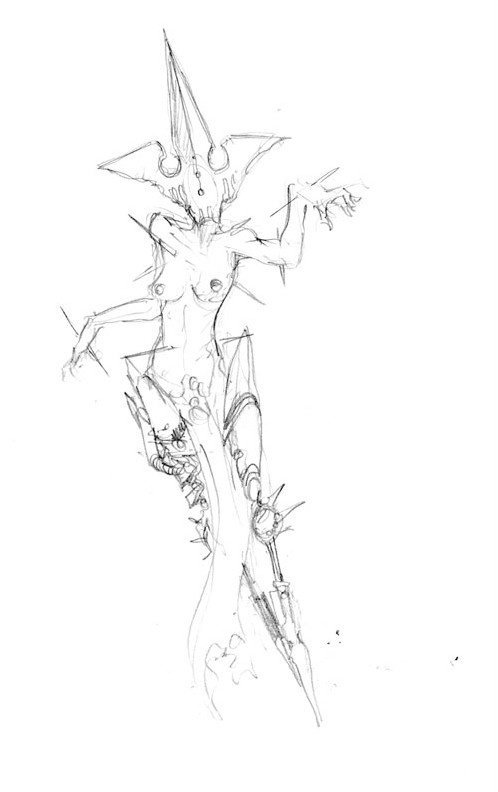 I increased the size of the sketch to be able to draw small details.Â  I usually work at 3000 pixels, because I want to be able to draw little details without crashing my not-so-fast computer.Â  After the initial size adjustments, I re-drew some parts of the sketch until I was satisfied.Â  Sometimes the digital version ends up being very different from the original, but I consider it all part of the artistic process.Â  I don't condemn myself to follow my pencil sketch, line by line.

After that, I put the sketch on Multiply mode and created a layer under it.Â  I threw in some rough colours to set the atmosphere.Â  I wanted it to be cold, lifeless and surreal, so I chose a dark teal for the background and the mechanical body, and gold for the mask and some robotic parts.Â  I played with the Color Balance (Ctrl + B) to add a little bit more green everywhere and I created a new layer above just to get rid of the line art.Â  I then set up my light source and rendered the lighting.Â  I didn't waste time with details; I focused more on the overall look (Fig06).

Now I started to refine the picture.Â  I threw some rusty textures in to add grittiness to the image.Â  I usually put them on a separate layer, on Overlay mode.Â  This helps a lot to create interesting shapes.Â  I also played with my huge collection of custom brushes.Â  Custom brushes can really speed your process, but just make sure that you're not dependent on them!Â  I also amplified the contrast and added a dramatic aspect to the lighting.Â  I added more blood on the mask to re-enforce the horror aspect, and to give a sense of inherent danger (Fig07 & Fig08). 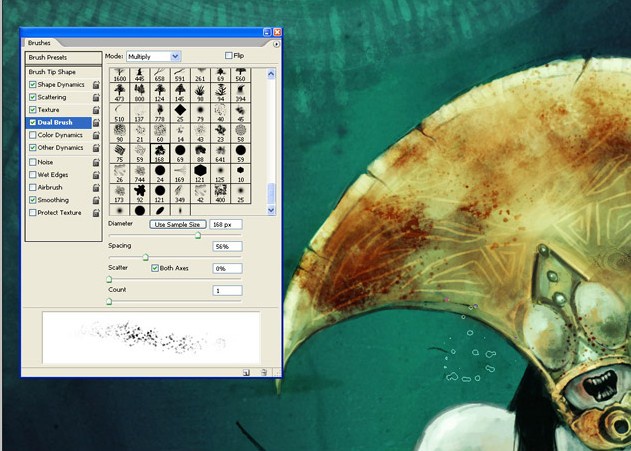 At this point I frequently flip the picture to make sure I have a fresh look on it.Â  I still wasn't sure of the exact look I wanted for the mask and I continually made changes to it.Â  I kept them on separate layers to be able to come back with different versions until I chose one permanently.Â  I decided, finally, that I didn't want any part of the face visible.Â
A faceless antagonist would look colder and less human; you can imagine anything under a strange and sharp helmet!Â  I added long and serpentine-like hair in the background, connecting with the Antagonist, to add a little creepiness (Fig09 & Fig10) 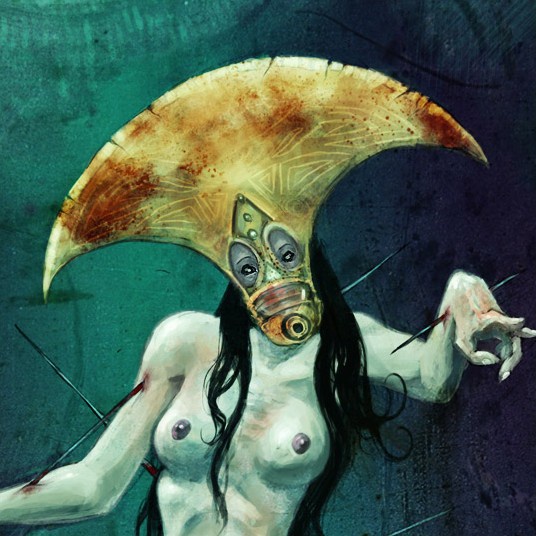 Now it's my favourite part - the details!Â  I added runes and industrial lines on the legs and I reworked the breast of the antagonist.Â  I used references to get it right (with a purely artistic eye) and to lose the 'fake' look.Â  I added gold repetition on the lower part of the image to balance it.Â  I tweaked the colours again.Â  I added another draped garment slightly higher than the first one to get rid of the hard demarcation between the organic and mechanic halves of the body.Â  I realised that the long spike going through her left arm and her hand wasn't logical, so I painted over and corrected it. (Fig11, Fig12 & Fig13). 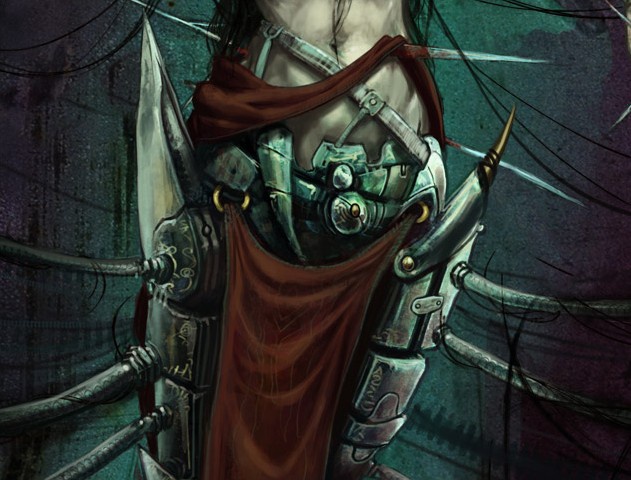 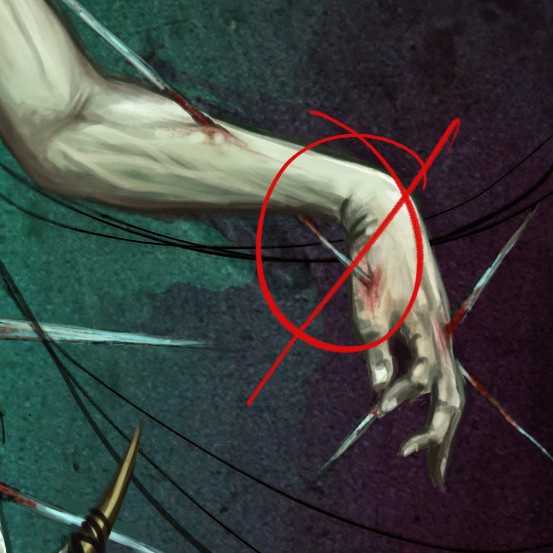 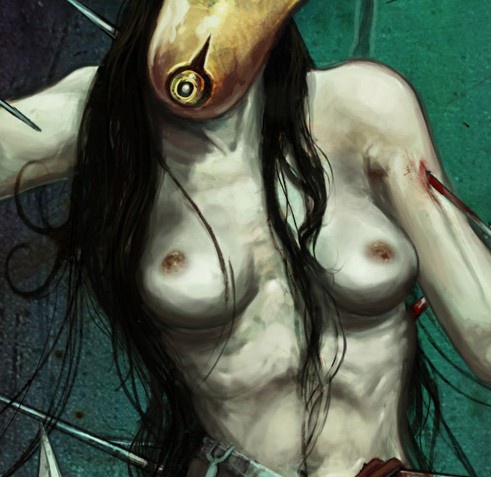