Making Of Slashcorch the Slayer

In the making of Slashcorch the Slayer I will explain how I come up with the idea for this fantasy creature and finish it up with the touch of fur and hair. 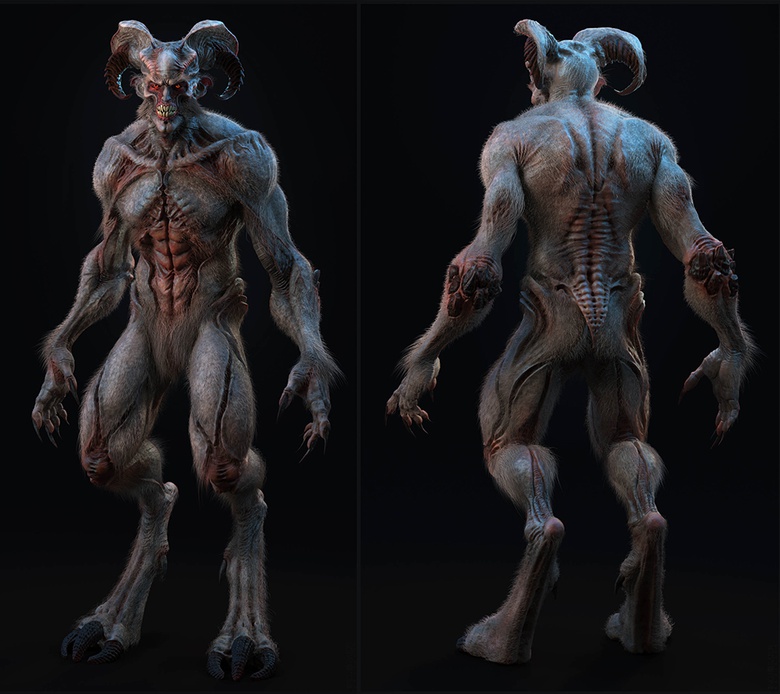 In the making of Slashcorch the Slayer I will explain how I come up with the idea for this fantasy creature and finish it up with the touch of fur and hair.

The first rough thought was captured as a ZBrush quick sketch quite awhile ago. Later it was modified and finalized to the current design. I gathered lots of references based on my original rough sketch, such as werewolves, Krampus, Sasquatch and lots of alien creatures. Using these I tried to blend them to come up with this design. The intention was not to create completely furry creature but rather with a little fur to give soft feel, along with muscles and veins. Part of the job was getting used to Houdini fur. 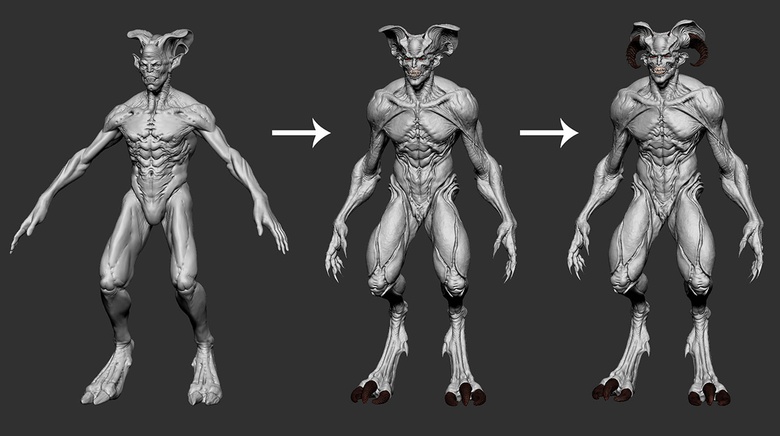 With a very rough idea I started the sketching process in ZBrush using Dynamesh128 project from LightBox. 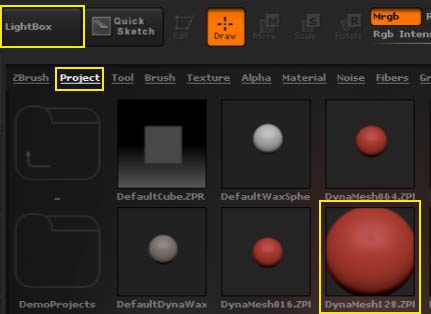 First I tried to shape a ribcage, from there I mask neck and arm area and invert the mask. Then I used the TransPose Move tool to pull out the head and arm portion for later sculpting. For the leg I used CurveTube brush. As it is already DynaMesh all I had to do Ctrl>Drag to blend the tube with the body. To get the right shape I used Move and Clay Buildup for form building and Dam_Standard for relief and sharper detail. 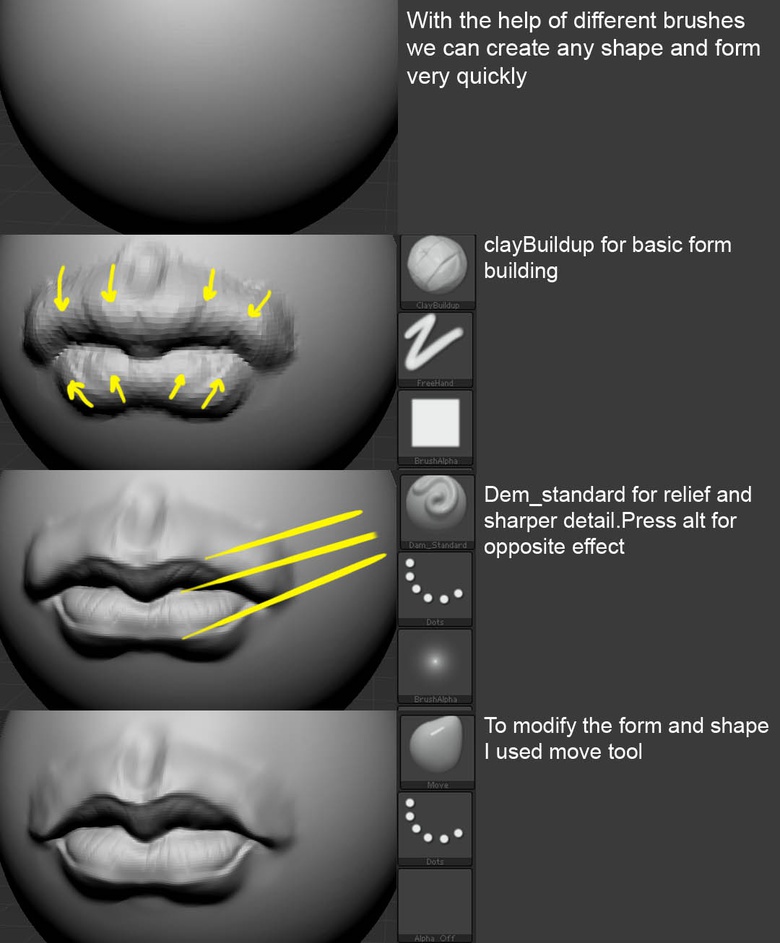 From Dynamesh128 Sphere I try to reach certain look of a character using TransPose, Move, Clay Buildup, Dam_Standard and Standard brushes with the help of masking. Once I was happy with the basic shape, I added the Inflate brush into the process to change or make the shapes more appealing. 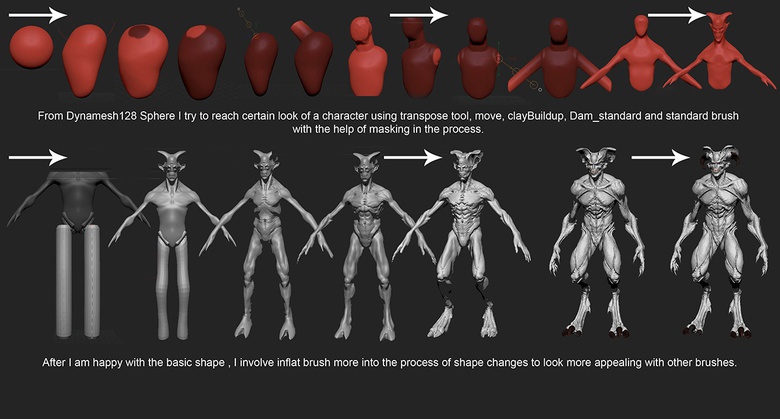 With the final design done I take the mesh into Maya, match it to the real world scale and start retopology. With the help of Maya tools and ZBrush's ZRemesher tool I finish the retopology process. Edge loops around the eye area, mouth and different joints were maintained in a way so that model can deform perfectly while animating. 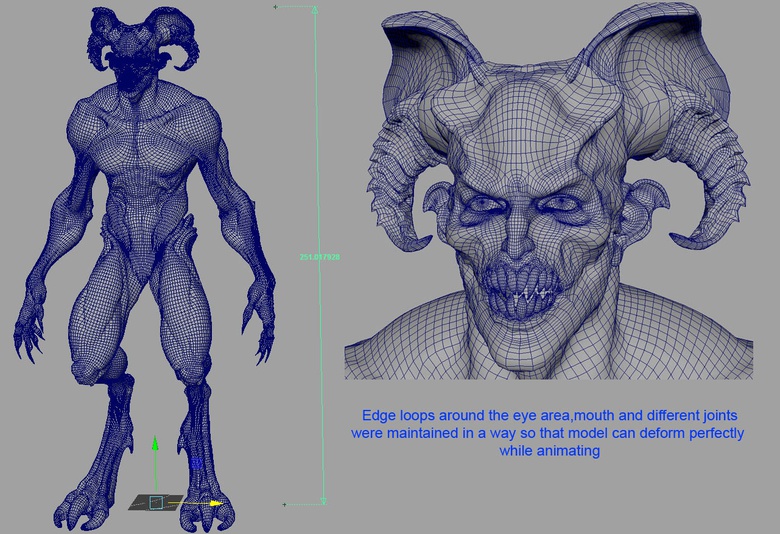 I did all the UV seams in Maya and imported it back to ZBrush to unfold the UV using ZBrush's UV master while enabling Polygroups. However, before that I made the Polygroups in ZBrush based on Maya's UV seam. With the unfold done, I arranged (in Maya) it into four UDIMs with some UV changes.

Now this model is ready for skin detailing. 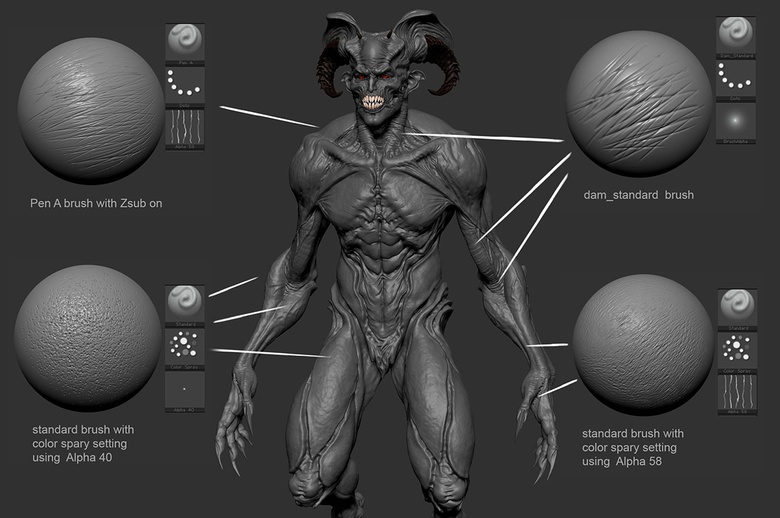 Smooth brushes play an important role for creating texture and details including blending the brush strokes. For example the Smoothpeaks brush can smooth a stroke's relief details keeping the indent detail intact. Also try to vary Z intensity while using it. 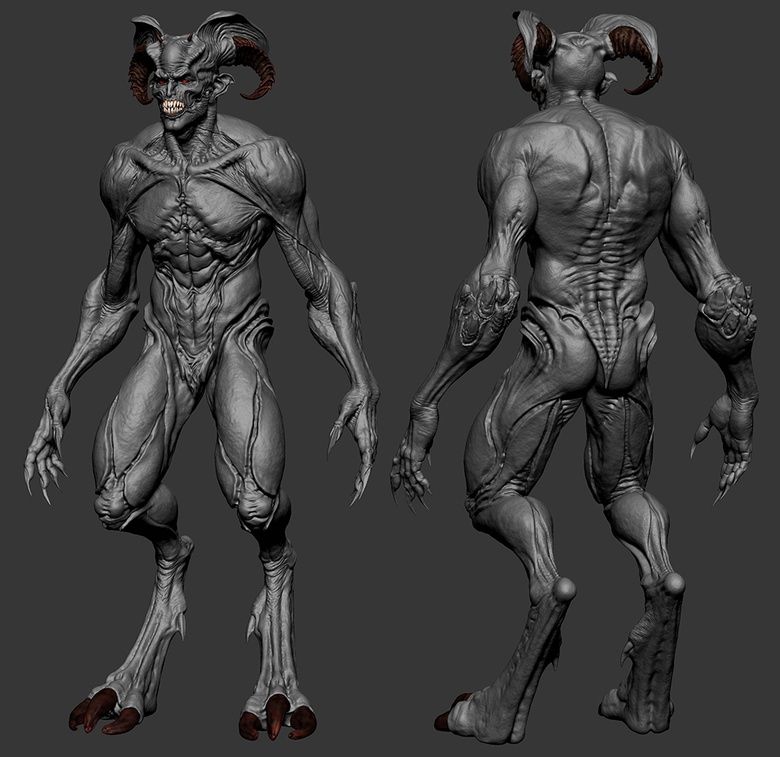 This creature has four UDIMs so I follow a special workflow to output any map from ZBrush. I have to create polygroups based on these UDIMs (UV Tiles). From Polygroups rollout press UV Groups. Now every time we output any map, we have to show only one of these Polygroup at a time.

At this point I was more concerned about displacement. I output all the displacement maps using following settings. 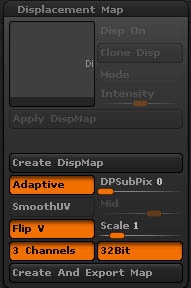 With the help of a special workflow for UDIM in ZBrush, I output all the maps. I wanted to check all my Displacement details so I exported all the mesh into Houdini 14. Did a basic lighting to check the Displacement and also created Mantra-PBR.
I Assigned the Houdini's Material Shader Builder to the body and did a special network to use the four UDIMs displacement maps with the shader. You have to double click this shader and get into it to create all nodes. 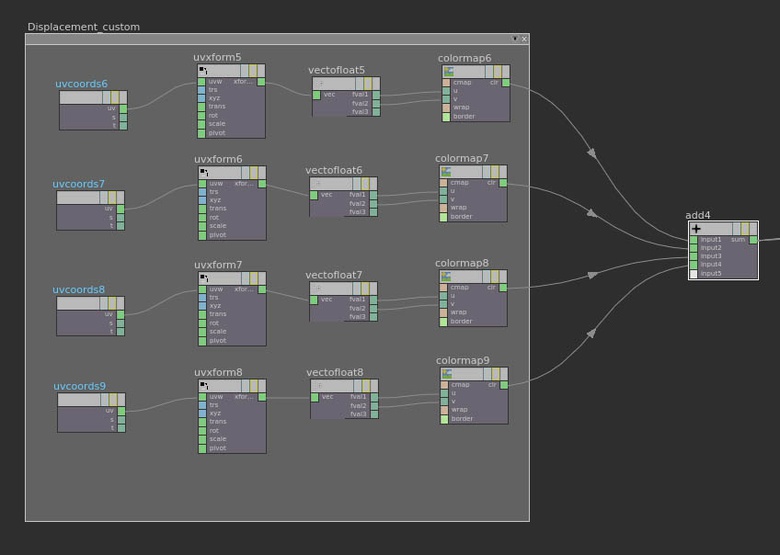 As I have maintained the scale of the model – which is based on real world scale – I will have less trouble to get the Displacement and detail which I already achieved in ZBrush. Here is a test render with displacement only.

Body texturing was done with brushes using various masking feature that ZBrush provides. While texturing I used ZBrush's skinShade4 shader, using Standard brush with color spray setting and Alpha 58 or custom alpha I pick different color for different places and start painting. This way I get the vibrant color effect from the brush. 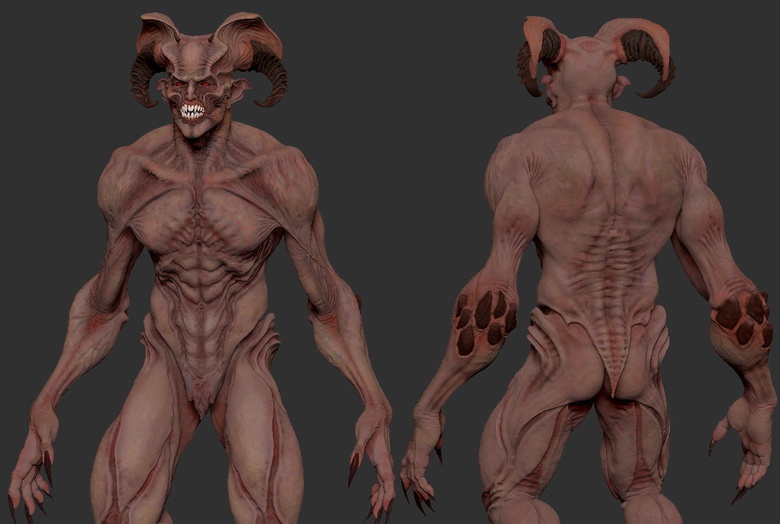 Bake the PolyPaint into texture and bring back to Photoshop. Made different color variation of the same texture and reveal each other using layer mask in different places. 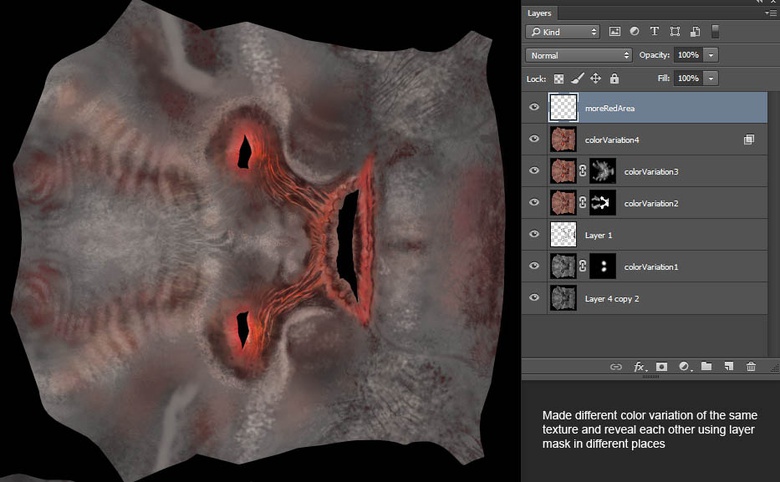 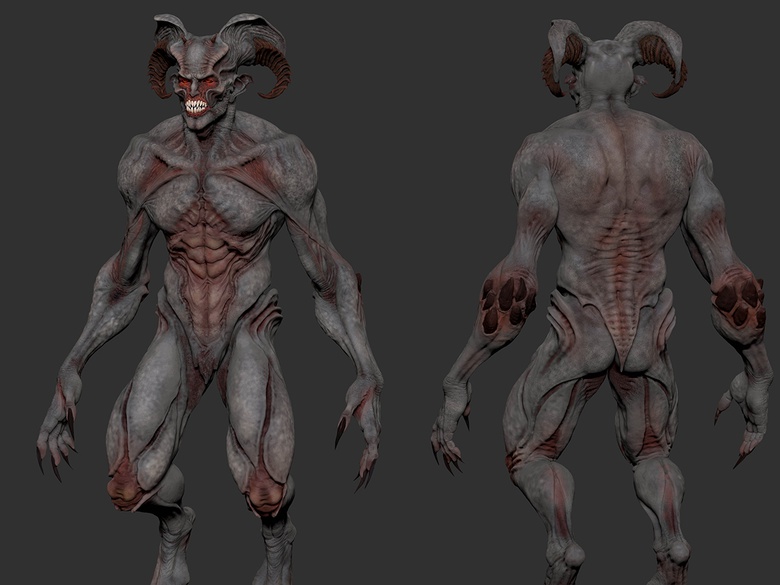 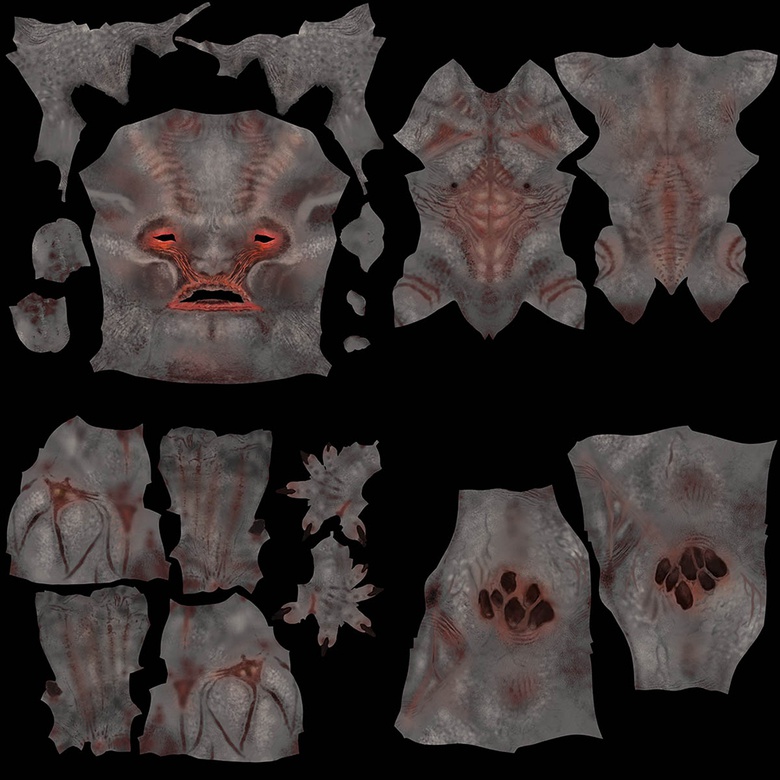 Specular map was made using mask by cavity feature in ZBrush and combination of displacement map. 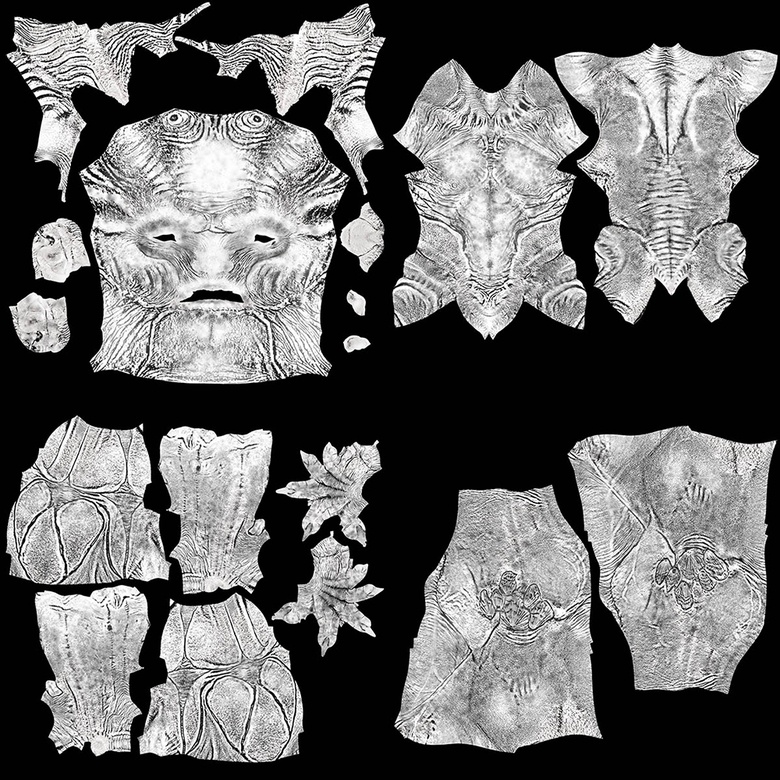 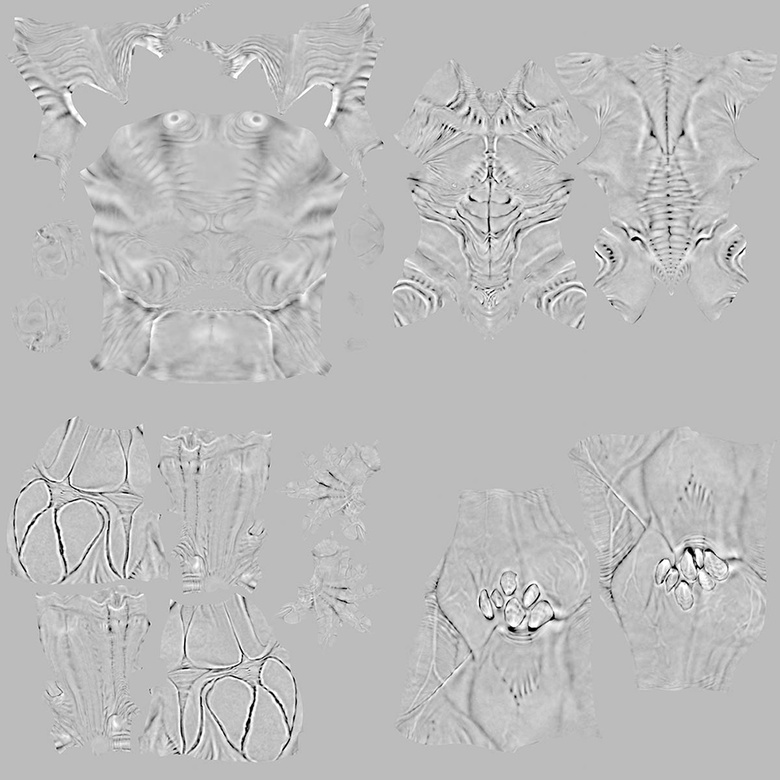 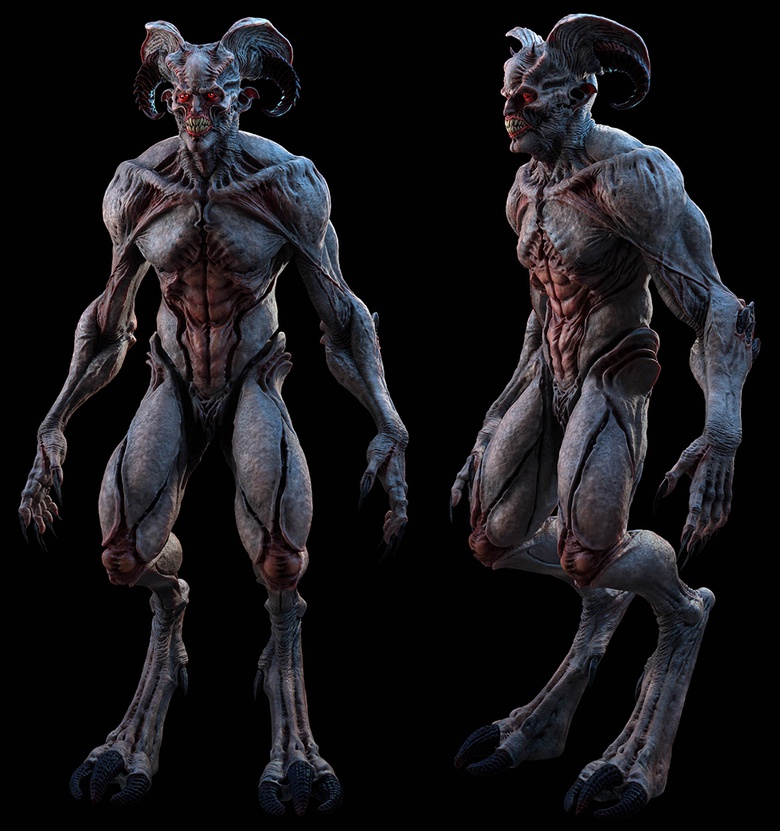 I used seven area lights. All the area lights attenuation is on and sampling quality is increased to 5 for quality render. And one environment light with HDRi was used for light distribution from all angles. This gives a global Illumination effect.

For the skin I created a custom shader in the following way. 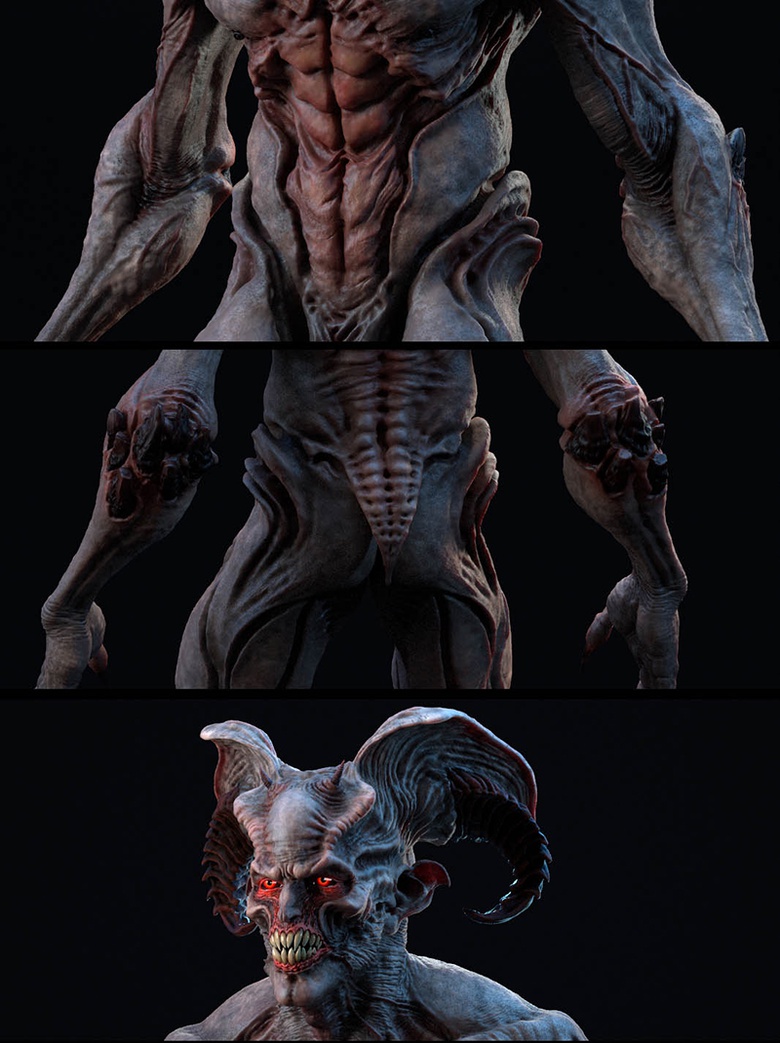 Some close-up renders to check SSS

In Houdini 14 I used a custom setup for creating the fur for this creature. In this setup I can specify the area where I want fur, using paint node and scatter line at that area. And connect it to Curve Groom for further modification. Finally I use it as a guide for the Fur node. 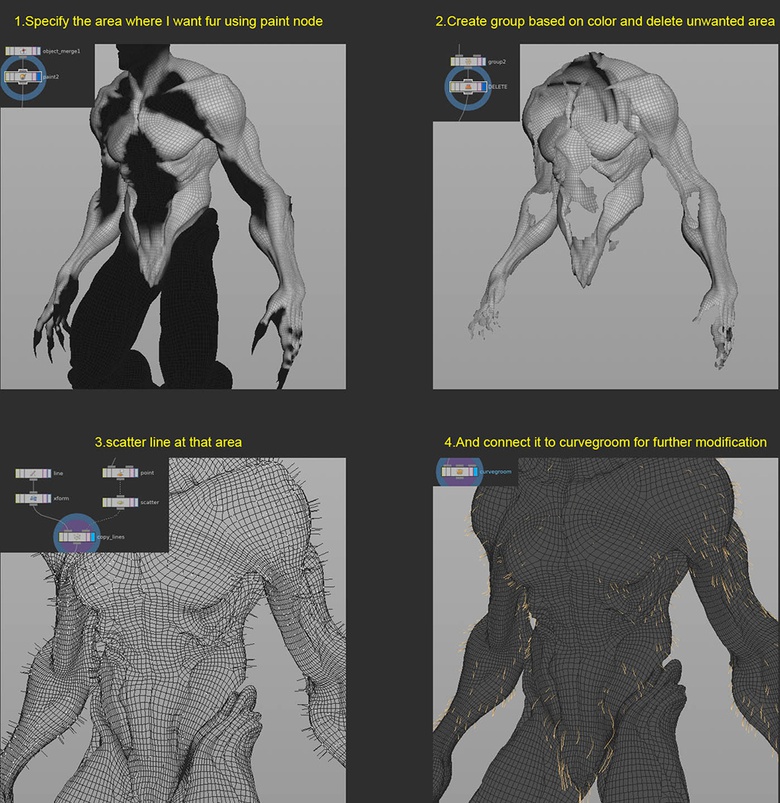 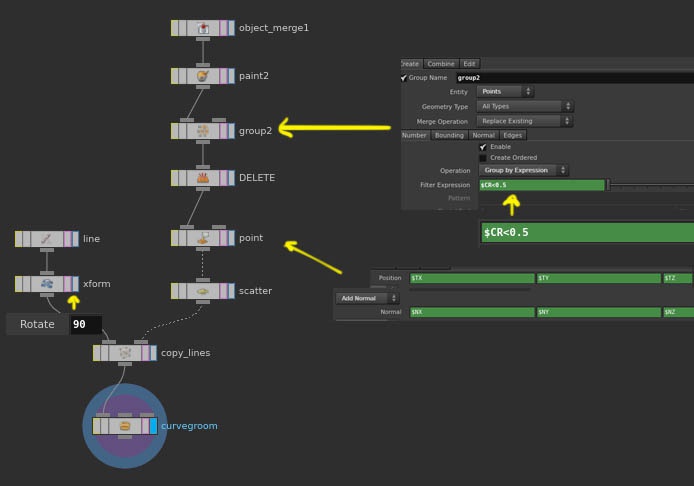 To create a fur node go to the skin tab and choose the mesh_OUT as skin mesh, (which are low res mesh compared to rendered mesh) and Curve Groom as guide. I hide the guides I created before and set the fur parameter 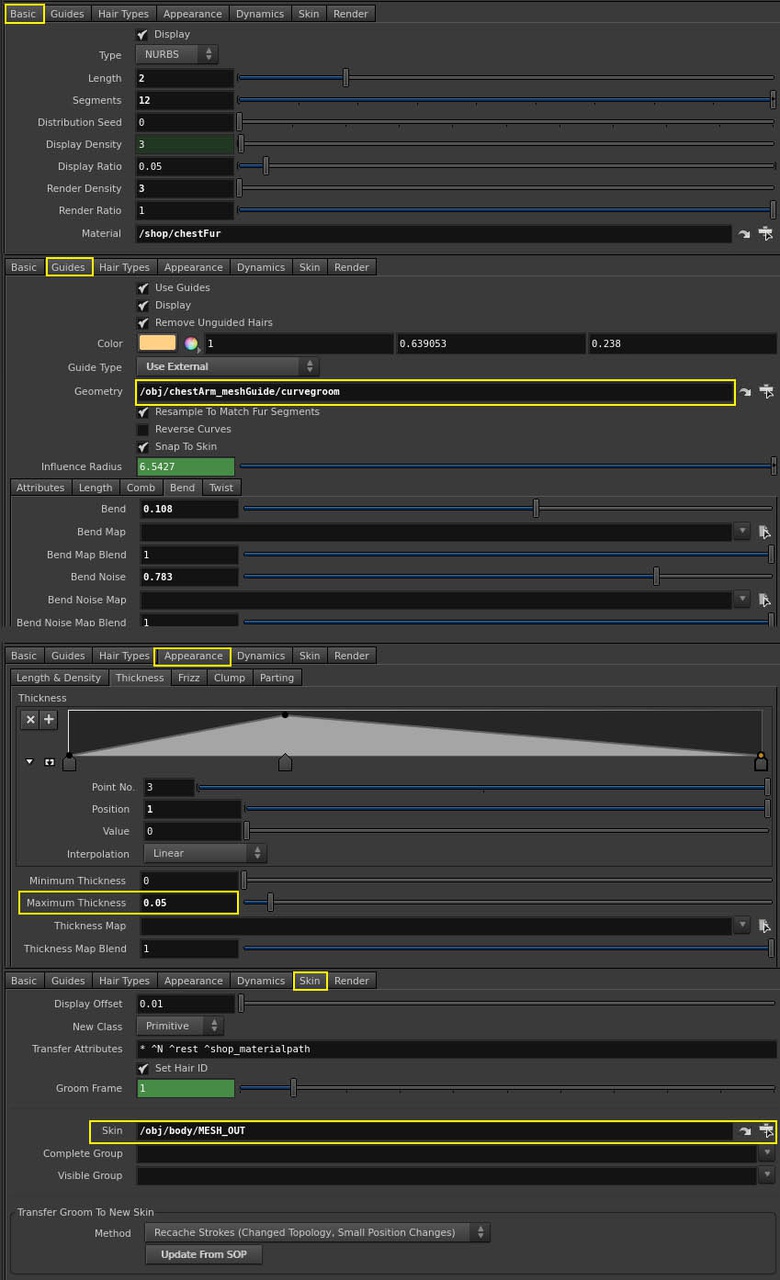 To color the fur I used Mantra Surface shader and used the color map as diffuse color. 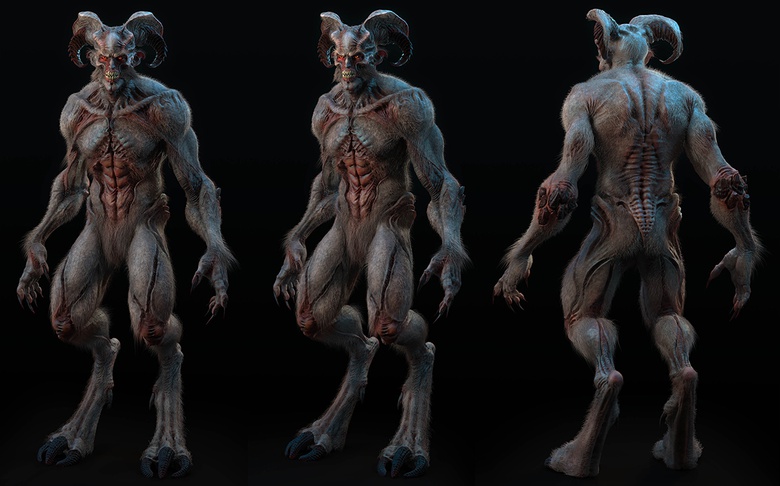 MultiPass setup is done very simplly in Houdini 14. Select the Mantra node under OUT network view and go to the extra image planes tab. Do the following setting. 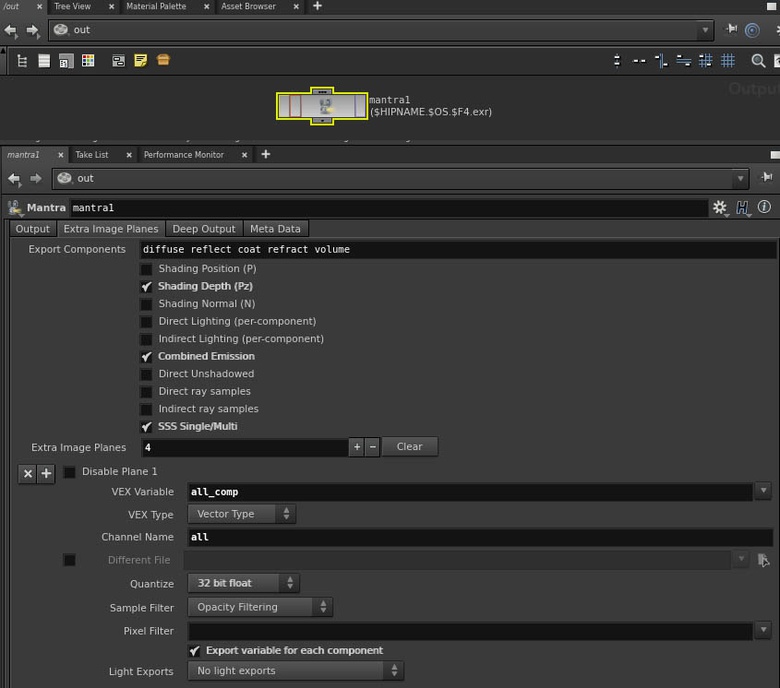 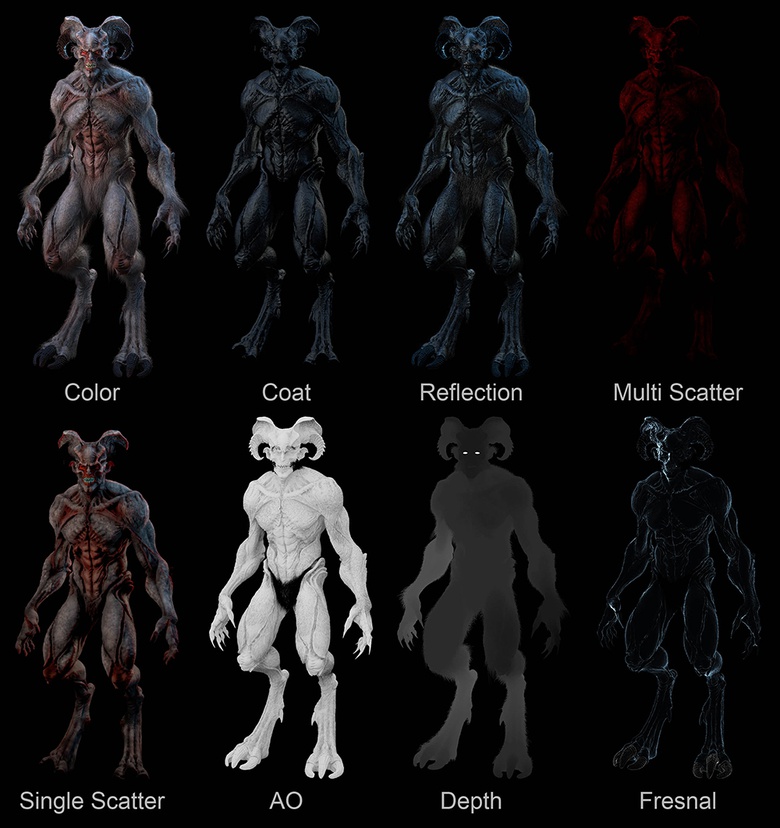 For Ambient Occlusion and Fresnel pass I created extra node network under each shader. 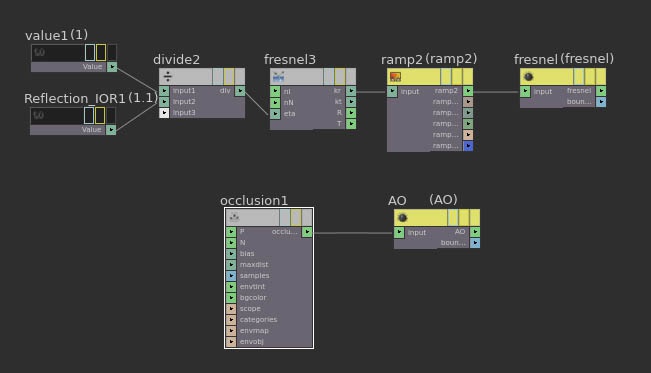 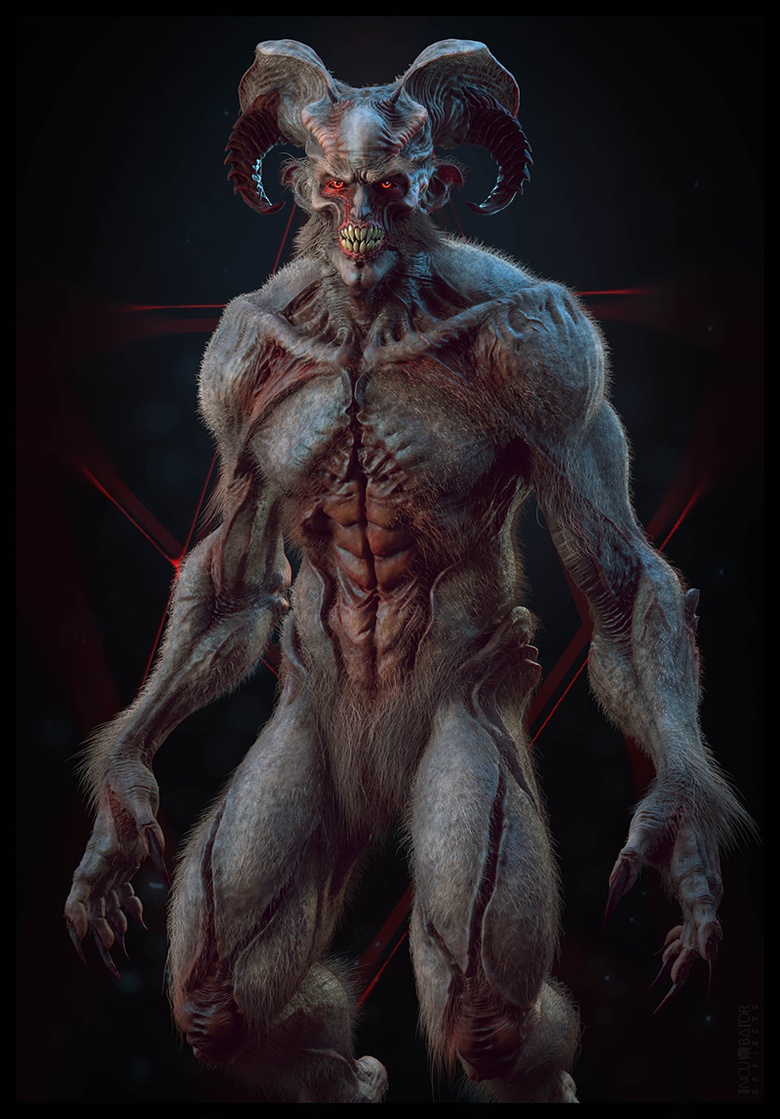