Seth started a while ago with some sketches. I don't normally spend too much time in the design phase, I normally have most of it in place in my head and just draw it out to see if what I envision in my head is gonna look remotely cool in the end.

After that I just tackle the modelling head on. I usually add TONS more detail than my sketches show, but that's a good thing. In this case I started with the Mechanical Skeleton that would underlie Seth's "Shell" 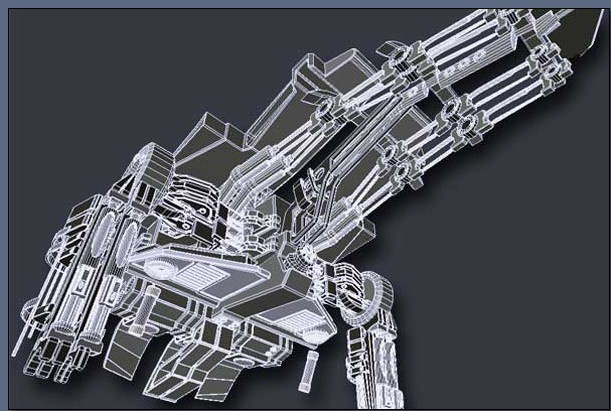 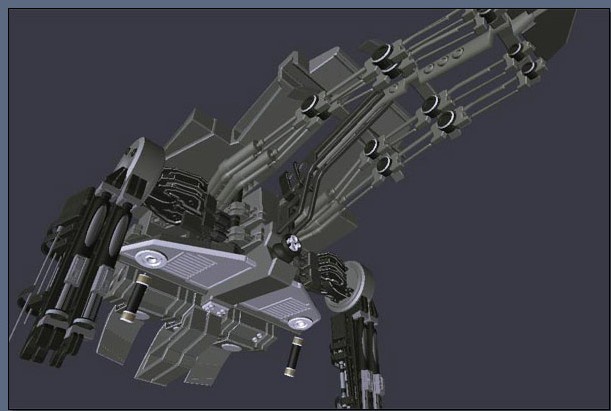 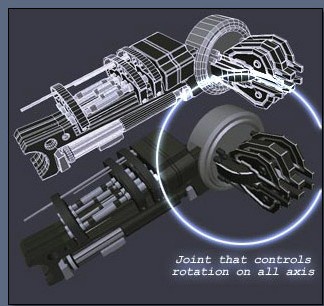 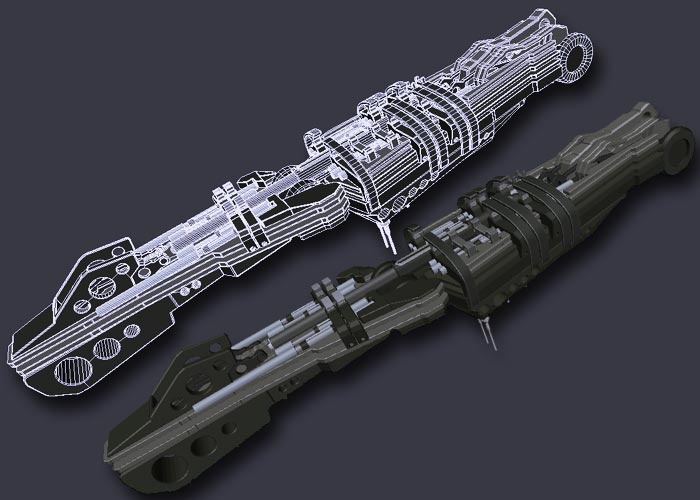 Next I moved on to modelling his legs, there are three parts to his legs, Upper, Middle and Lower, the Uppermost section is actually part of the mainbody above. It is also attached to the joint that controls, rotation on all axis, so his leg can move freely if needed.

The Rest of his legs, Middle and Lower Sections. I use quite a lot of duplication in my modelling, to add lots of detail. I duplicate and an object modify it slighty and the fir it into my model. Sometime I start off with a clear idea of what I want and then think, hey wouldn't it be cool if, and then add that. I also use beveling to no end. 90 degree edges in my book suck ass, just about everything in real life has a bevel to some degree. Beveling is also beautiful for picking up highlights and adding detail without really much work. USE IT !! But rather be subtle than obtuse, large bevels can look crappy and fake, best left to being used in American Footbal Logos *grin*, also, now I am not sue how this works in other 3D packages, but as I work through modelling, everything gets surfaces, not textured or coloured, given names for later surfacing, it might seem like a lot of work building, naming, building, naming, beveling, naming etc etc, but believe me ... it's worth it. Also don't worry about colour when modelling, in fact use bright green, pinks, blue, so you can see what you have given a surface name to and so that you can disinguish between them. If I had a buck for everytime someone gasps in horror when they come by and look at this multicoloured fashion sensless model I am working on....... well I'd be rich.

Next it was the feet. I wanted to have a hard sorta armour looking shell. Not exposed mechanics. Here's also some texturing for the feet that I did. I love texturing, and spend quite a bit of time on it. Love to make it look dirty, worn and used. 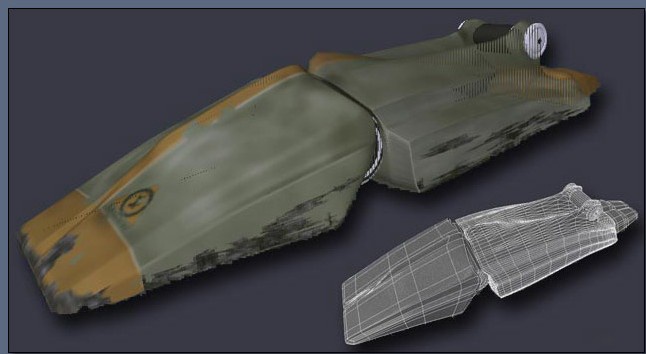 Below are the maps I used for his feet. First the Texture Map, the Colour of his feet. I first paint the overall colour, in this case the beige on a layer in photoshop. Then on another layer I design the paintwork, then I create the underlying metal on another layer, add the decals on another, and then a screw it all up, erasing parts of a layer here to reveal exposed metal, adding dirt and smudges, scratches. I always use different layers for everything, it makes it so much easier to changeor add things, and for creating and manipulating my bump, spec and reflection maps.

I am sure I don't have to explain how bump, spec and reflection maps work, but just in case the whiter areas define areas that will be highly relfective, specular and in the case of bump maps raised, the opposite applies for dark areas.

I always paint my textures at very high resolutions, always higher than broadcast quality, so if you needed a full frame shot of his foot for example you could have one and the textures would hold up. The foot textures were created at a resolution of 1000x1200 (and that's quite small for my texture work).

Next I moved onto the Main Outer Casing, His Body Armour. I spent quite a bit of time on this. Wanted it to have almost an organic feel to it. Someone on a newsgroup put it best I think, and called them Cockroach plates, which is just what I wanted.

I then set about texturing the amour, this was the area where most of my detailed texturing would be done. I knew exactly what I wanted, what type of metal it should look like and what kind of wear and tear I wanted.

I started with the same procedure, lay down the initial colour, the painted on the orange paint, added text and fine details and then started to add wear and tear. You'll notice that around the scratches, there is always a fine white line, this is something I love adding, also added to the bump map it adds a little raise before the dent into where the scratch is and looks beautiful when rendered, and easy way to do this is use you layers in photoshop. Paint the scratches solid black on a seperate layer, when done select the black using colour range, and then delete the layer with your beige colour using this selection, then still keeping that selection active, create a new layer and expand the selection by 1 or 2 pixels and fill it with white, go back to the solid black layer, reselect it using colour range again, and then select the new solid white layer you just created and delete the middle of the white scratched using your selection, you now have a nice white outline which you can use for bumps, specs and textures around your scratches.

If you don't follow all that ask nicely and maybe I'll send you a .PSD with the layers so you can see what I mean. 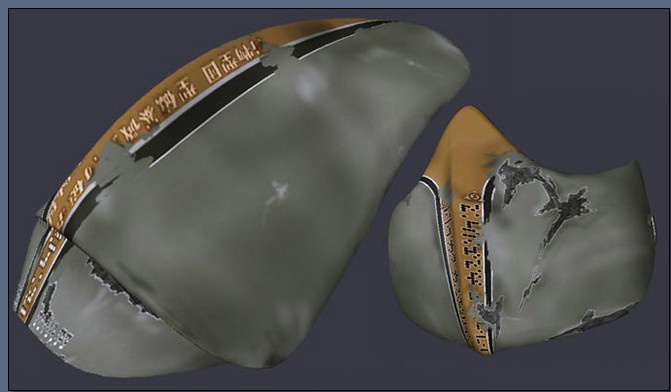 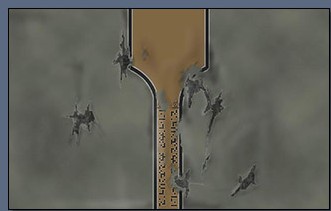 This is the map for the front mask armour, Above Right.

Below are the Bump Specular and Reflection maps for the Front Mask. I find that what I do more than often for dents and scratches is, the scratches are lower than the paint section, i.e. darker on the bump map, but they reveal scratched metal underneath so this is shinier than the matte paint used as coating, so it's lighter than the surrounding colour in the spec and reflection maps. 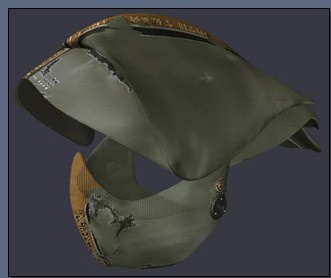 Last but not least, I created his optics (Below). Initially I had thought of a human i.e. organic eye, but then thought that would make it look almost comedic so I changed my mind and went for more mechanical industrial design. This is where duplication is king, and is very effective, well I think so at least.

Anyway, that's all for now. Please if you have any further questions or requests mail me at

And last but DEFINATELY not least here's a final render. Using Radiosity. 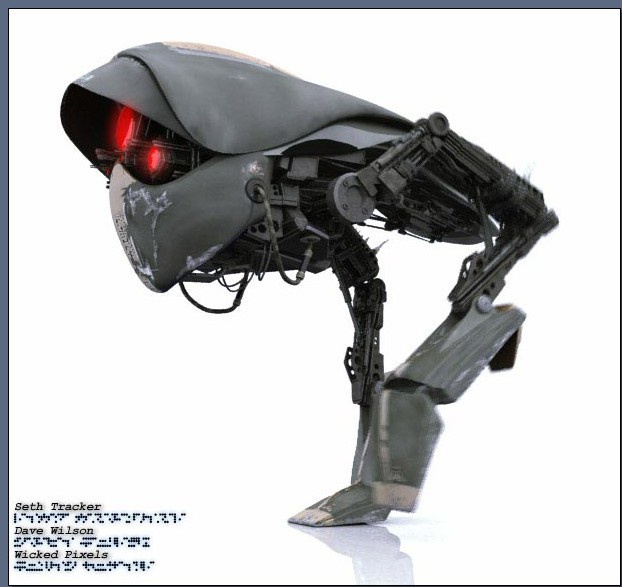