Making Of 'Self Portrait' 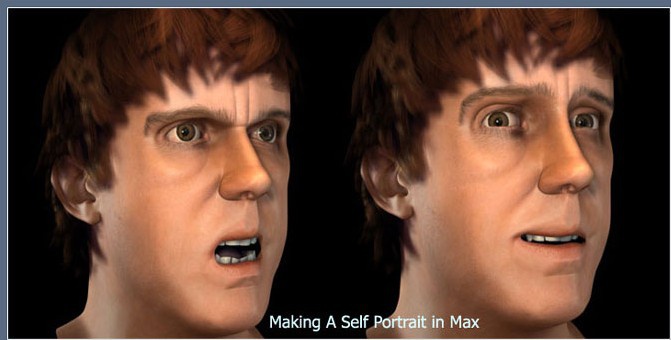 1. The self portrait seen here was a project that I undertook to try and acheive a level of realism I had never done before. From the initial modelling to the final touch ups the project was very much a learning experience. I might also add that I have have a BFA in painting. I belive anyone making, or interested in making figurative 3d art would greatly benefit from traditional training. Anyway, this tutorial is more of an overview of the the whole process of building a self portrait. Though I do explain some of the basics in the different phases of modelling and texturing. Every artist has there own approach to doing things. And so this tutorial will probably be different than others. Even so I believe exploring as much as you can and trying many different methods of doing things will only make one stronger. Also for newbies that are looking for the very basics of the UI in max make good use of the Max Help. Therein you will find very in depth explanations of who the specific tools of the interface work.

And now the tutorial! 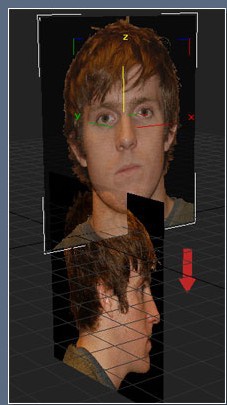 2. To start with I had a photographer friend of mine take two digital photos of my face with a 6 mega pixel camera. These photos proved very resourceful for the photogrammetry process that followed. Photogrammetry is basically the process of using 2d photos projected onto 3d planes as a reference for polygonal modelling. Some artists will make spline drawings of the defining lines of a photographed or painted reference. Then they will build the model based on those spline drawings. Again, every artist has there own way of doing things. For this project I did all of the modelling using the actual photos as my reference. These pictures would later be the jumping off point for much of the texture work. I will get into that later. 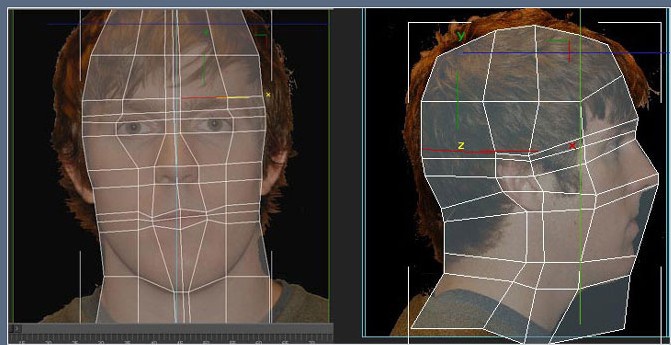 3. To begin the modelling procedure I created two planes in the front and side view to line up perfectly with the photos. I then used sub-object operations to move the lines making up these planes to trace the dominant parts of my face. If you are starting with planes like I have "edge chamfering" is one of the cleanest ways to add segments to the planes. I would select one or two edges all the way accross the plane. Then I would chamfer them to create two or four new edges. I could then use the standard transform tool to move those new edges around. Once this was done I had a 3-dimensional blueprint of all of the peculiarities of my face. This proved a very effective starting point for all of the modelling. 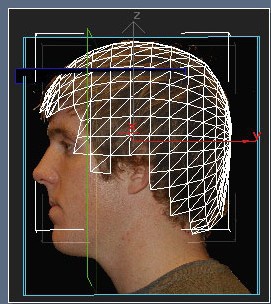 4. I then created a sphere that I roughly modelled to fit the shape of my hair. This was also the easiest way to begin to define the shape of the cranium. This mock up hair piece would later be replaced by the actual hair model. I will explain this later. 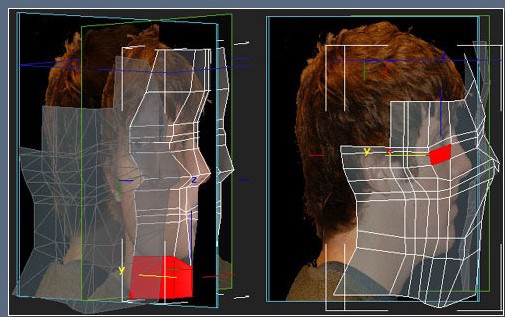 5. Once I had this general reference for the shape of my head I began to become more intricate with the sub-object operations on the face to further define its shape. I simply cut in lines where I needed them to define all of the major contours. In conjunction with adding segments I pulled, pushed, rotated, and scaled all of these polygons to form very closely to the defining structures of the head. This process was the bulk of the modelling job. However, I will refrain from going any further in depth here. I think that if I do I would be delving into an entirely different tutorial. 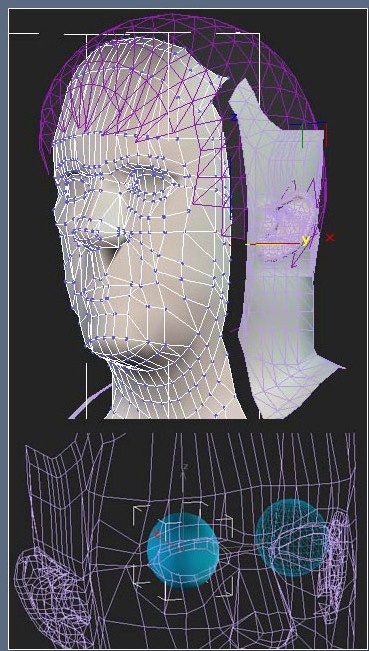 6. After I was pleased with the structure of the model of the face I welded together all of the verts that needed welding. The head was then one mesh. Up until now I was working on the different parts of the face separately as I started with two planes instead of a box. Finally, after creating spheres the size of the eyeballs and placing them where the eyes are I cut out the polygons around the eyes. 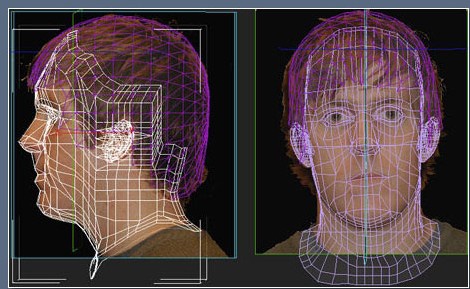 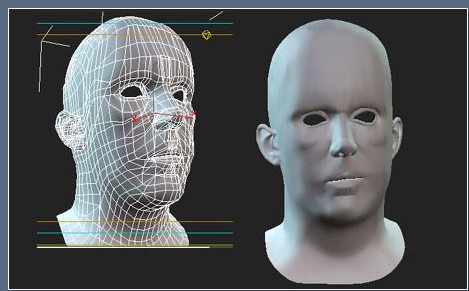 7. A mesh smooth modifier was added to the stack with two iterations in the render. (the lower right hand head in this picture is what the final model came out looking like with one iteration on the mesh smooth level of the stack). 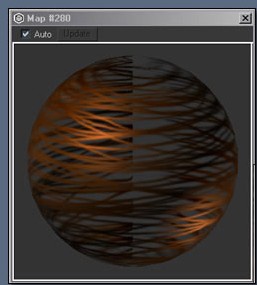 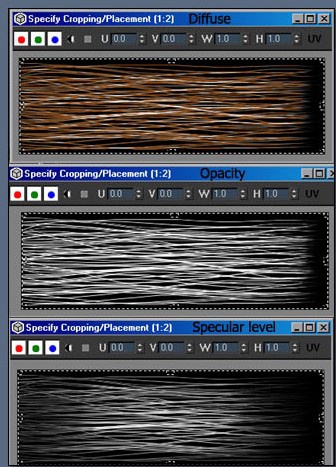 8. The hair was made using aplha channels in conjunction with color maps on planes. To start with I created a plane. Then in Photoshop I drew strands of brown hair for my diffuse map. I then copied this image. Using color selections I whited in the positive space and blacked out the negative space. This black and white copy was used for the opacity channel in the material. For those of you who do not know, an alpha channel is a way for 3dmax to interpret opacity and transparency within maps. 100% white equals total opacity and 100% black equals total transparency. I then created a variation of this black and white opacity map for the specular level slot. This is important even if you don't plan on having very much spec on your hair. If you don't have a spec map that mimics the alpha channels the edges of the geometry will show up. This was exactly the process used for creating both the eyebrows and the eyelashes. 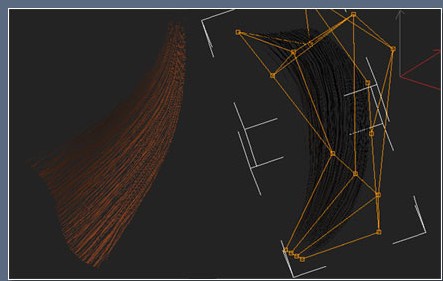 9. Once I had a good look for the hair on the flat plane I added an FFD box modifier to it for the manipulation of its shape. You can see here what one of the clumps of hair ended up looking like. I actually created several variations of clumps of hair as different shapes were needed for various parts for the head. 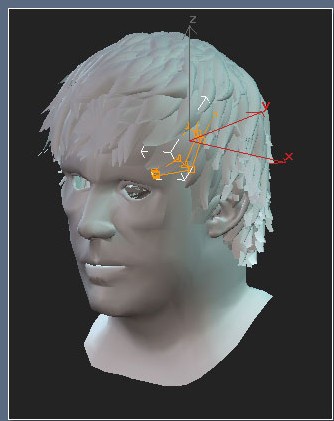 10. You can see here how the final sculpture looked after I had manipulated all of the hair clumps and positioned them on the head. 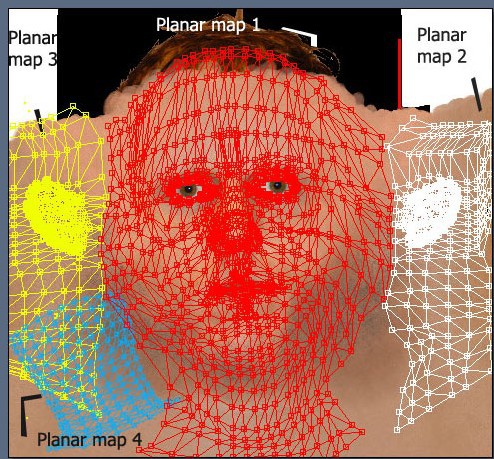 11. The skin texture was the hardest part of the whole project. I do not think I was successful in creating realistic skin, but non the less I am pleased with what came about.

I used the uvw unwrap modifier to put the texture on the model. By creating several Planar maps( one for the front, one for the back, and one for each side of the face) I was able to pull the uvw coordinates around to fit the model almost exactly. Some people create a checkered map for quick real time uvw coordinate placement accuracy. This is an effective way for the most part to get your planar maps lining up pretty closely. However, when you are dealing with human anatomy and skin tones, which have many many intricate details you have to take your mapping job to the next level. This meant a long process of pulling a couple of uvw coordinates and then rendering after each adjustment to see if there was any noticable line between the planar maps. It was basically just common sense and anal retentive work. 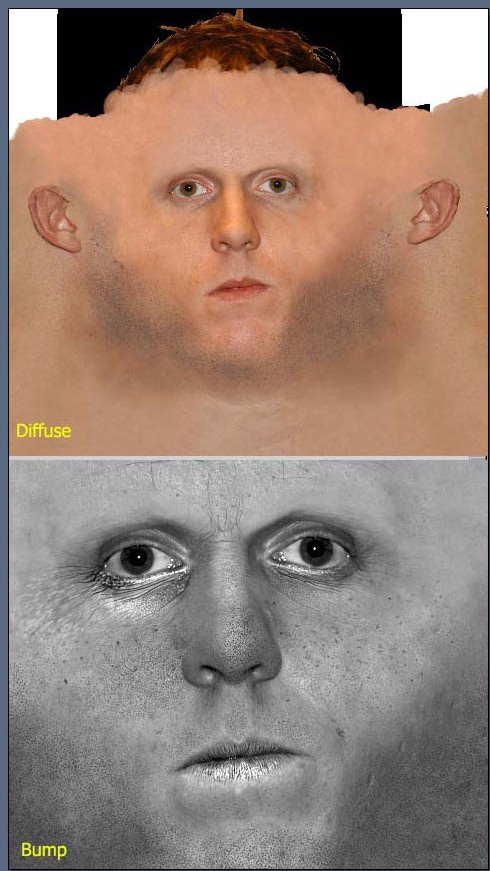 12. For the diffuse channel I created a texture from the photos that my friend had taken. Carefully using the clone tool and painting in details where needed proved sufficient. The Bump map actually took the longest time to create. As seen above it was a black and white derivative of the diffuse map. The most intricate painting took place on this map. Using slightly feathered brushes to create a tiny amount of falloff of each brush stroke translated into the bumps channel with the most realistic effect. Also, I found that when possible painting in the lighter tones on a darkground, as opposed to the vice versa had the most realistic outcome. The specularity map was almost identical to the bump map.

13. This map was used for a very slight self illumination. It created the illusion of sub surfuce layers of the skin. You have to be careful with self illumination maps though, because if they are too strong the skin will appear to be glowing. 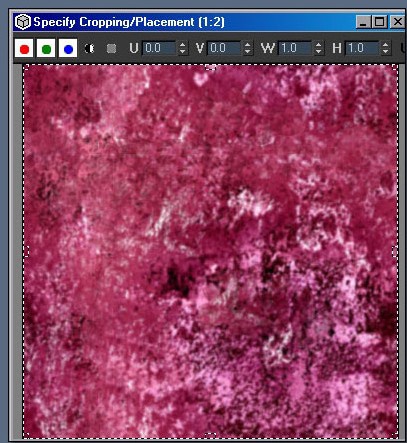 14. Once these maps where created they where layered and manipulated within a Standard type material with a Multi Layer shader. You can see here that I layered a lot of the same maps on top of one another, namely the specualar and glossy channels. This was done basically to control the area on the map where the two layers of the multi layer shaders spec levels would appear. You can also see that I created a mix map within the self illumination channel. This mix map actually contained the same map twice (the self illumination map shown above). A mix map, if you do not know, is a type of map that allows you to mix two bitmaps together at whatever percentage you wish. In this case I altered the RGB outputs of one of the self illumination maps so that it was relatively green in tint. The other map remained the redish purple tint you see in the picture above. If you did not know, red and green are complimenting colors. When placed next to or on top of one another they create a visual buzz. At the same time they neutralize one another and appear somewhat grey. This, in conjunction with a slightly greenish self illumination (within the Multi Layer Shader basic parameters rollout) created a livelyness to the skin. You can also see here how the specular levels where treated within the Multi Layer Shader Basic Parameters rollout. There is a slight anisotropy to give the overall highlight a slight oval shape that mimics the shape of the head. The first Specular layer was given a high glossiness and an orangish tint. This was to pick up the very hot spots of the highlights. The second Specular layer was much broader as the glossiness was only set to 40 giving the face an over all sheen. Again here I used complimenting tints of color as the second specular layer was tinted slightly blue. The effect here is extremely subtle but effective.

15. In the end I was very pleased with what came about. I hope that this tutorial, an over view of the process of how I created a self portrait serves you somehow. Bye.