Welcome! My name is TamÃ¡s GyermÃ¡n and this is a short description about one of my images, Rallypoint - Outer Rim.

The inspiration for this image came from two great sci-fi films: Chronicles of Riddick and Homeworld. I tried to imagine how to create a sci-fi fleet that would suit the Necro Armada and the Turanic raiders. I wanted my fleet to look as if it was travelling across space and collecting what it finds, almost as if they were space pirates. Stargate also influenced my designs. When I had all of this in my mind I could start creating my fleet.

I wanted to create a group of images that showed the fleet in different environments, but unfortunately I didn't have time to complete the set. But I have created two images: Get my fleet off the orbit and this image, Rallypoint (Fig.01). 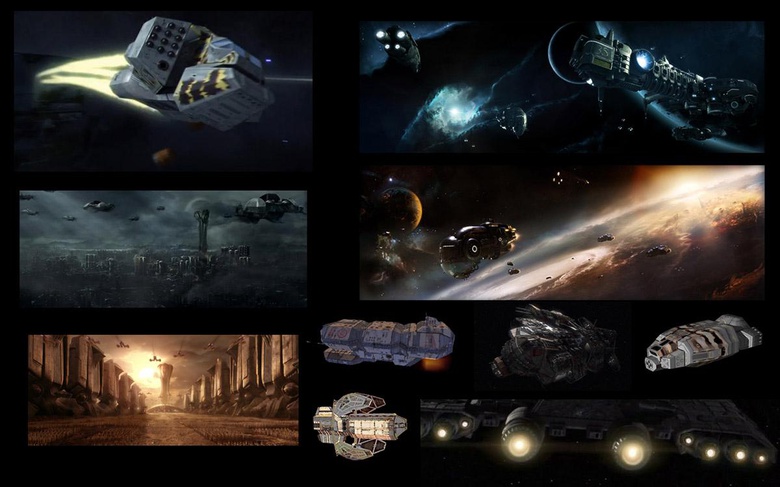 My starting point for this image was to, in general, think about standard space scenes. They usually contain star fields, clouds, nebulas, moons, stars, asteroids and, of course, starships!

My idea was to show a medium-sized ship, which was covered in lots of hard, connected plates and that had large, maneuverable engines. I wanted it to have powerful, but slow, weapons and to be well protected from above and from the side. I wanted the lower parts of the ship to show quite a lot of cables and technical elements as this would be the most vulnerable section. I created a rough base mesh from simple shapes and then started to bend things into the shape that I wanted. By adding arches and a bent surface it gave an ancient look to the ship (Fig.02). 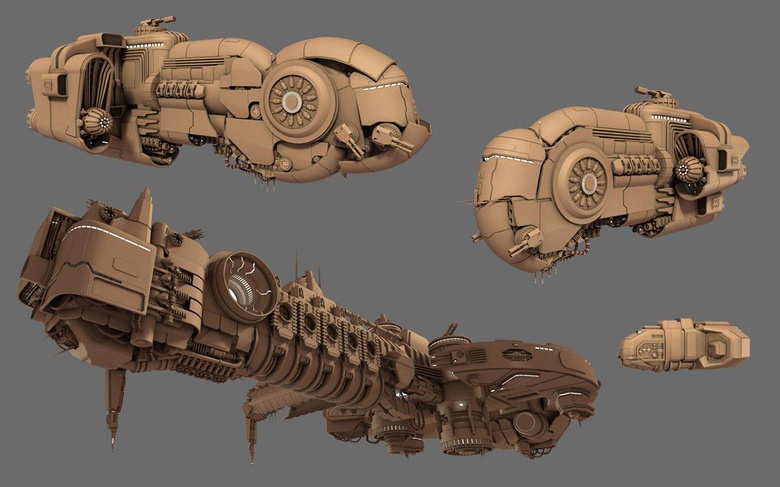 Whilst creating this model I thought carefully about the overall scene. I wanted the scene to be set by a massive dark nebula deep in space, which could be a rally point for ships to go to. The overall idea is that this could be on the edge of a planet's space empire. The main elements of the scene are the space station and a massive dust cloud. The station is a 3D model and the dust cloud is a matte painting.

After I had created the model I thought about how I could make this model work in my scene. I needed to set up some good shaders, a good camera angle and lights. The approach I was using was to make the separate parts and then place them in the matte painted scene, which is a great technique to use if you don't have a very powerful PC.

Because the scene I had in mind was very wide, it meant that I needed to set up all the elements in a scene together to ensure that the lighting and perspective were consistent. I had to work out how I wanted the final scene to look and render the models with the correct perspective so that they could be composited later in Photoshop. This, however, meant that I could still render the models separately so they could be composited in Photoshop later (Fig.03). 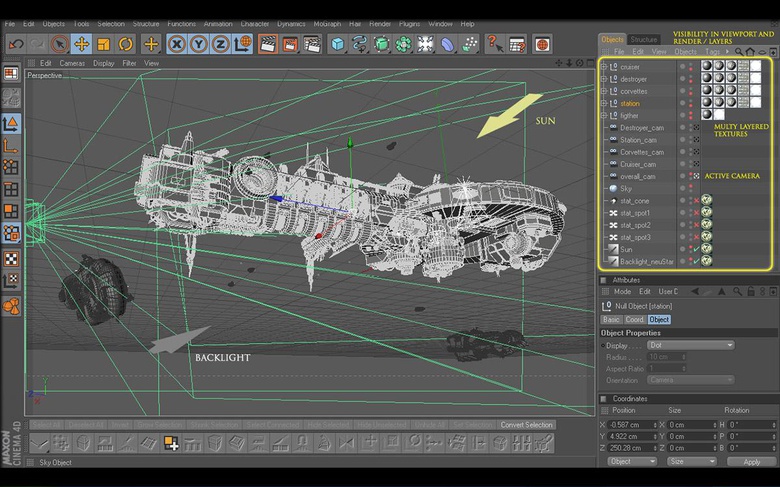 Lights are always important in every scene. They tell us the time, season, weather and, of course, play a huge part in demonstrating the drama of the scene. Space is obviously always very dark, which means I had to use more lights and ambient GI in the scene. In general, a soft, gray, ambient GI is enough. As I had a specific idea for the background I used the nebula's color as the ambient light color. The other option is to use the environment as a HDRI.

Spaceships are usually made up of metal, cables and lights. The self-illumination settings are very useful when creating the individual lights. In game development, self-illumination is used a lot to create the smaller lights that don't play part in the overall lighting of the environment. The Cinema 4D version of 3DTotal's Celeritas eBook tells you how to set these up (Fig.04). 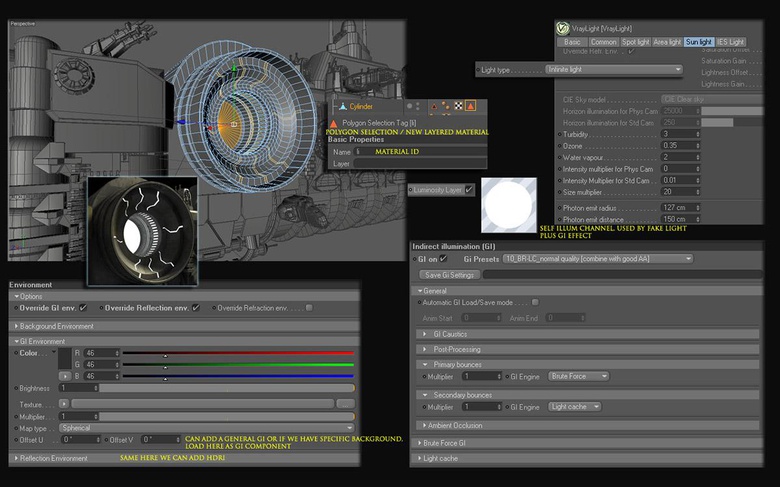 After I had rendered the raw image and an AO pass, I painted in some wearing and abrasion on the parts that are most likely to have been bumped around. This adds to the sense of realism. I also painted in some bright spots and glows on the surface of the ship.

If the image is going to big enough that people will be able to see the windows I suggest painting in some characters or machinery as it adds a human element to the cold machinery (Fig.05). 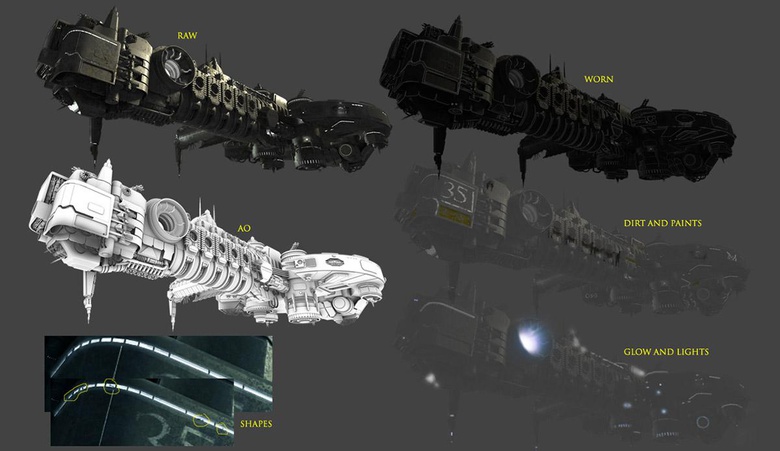 The next part was to see if I could paint the dust cloud in the background. To do this I used alpha brushes set to a soft opacity. This has to be done carefully by eye. I started right in the center, creating the bright, white light, and then moved on to the blueish cloud shapes around it. To do this I also used some photos of clouds.

After the main shape was created I added some faint dust over the top of the bright parts to add a sense of depth and added a lens flare to show how bright the light is. It is really important to paint the dust in carefully as it almost needs to look as if it is moving with the dust cloud (Fig.06). 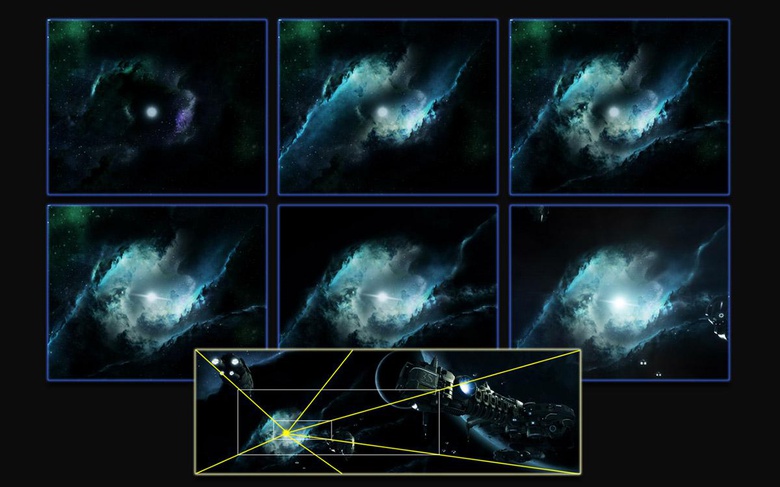 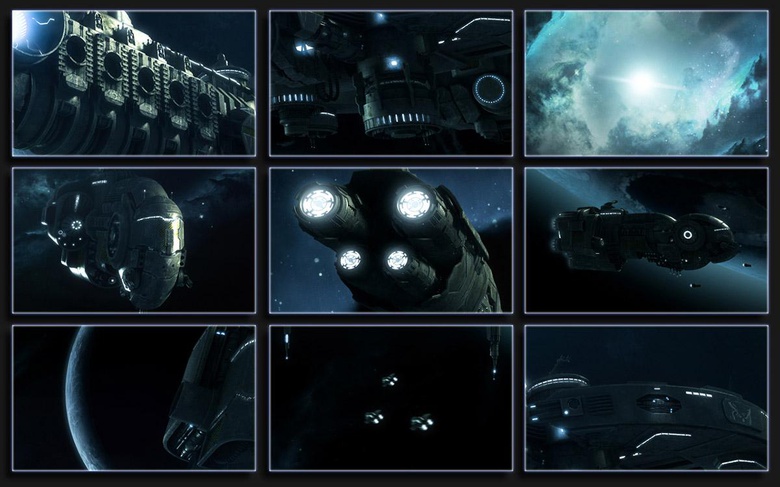 This Making Of shows how I made the second image from my planned series of three images. I hope knowing my process is helpful (Fig.08). 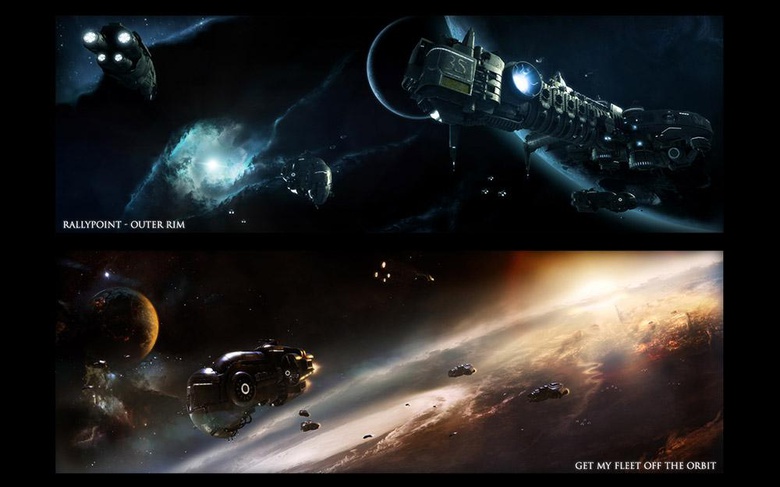