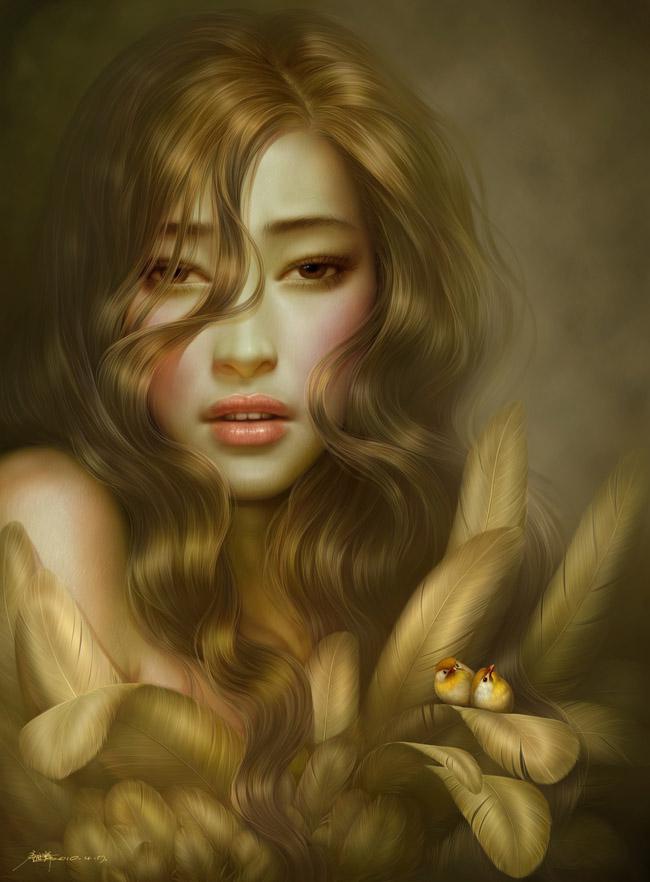 When I began this illustration I didn't really think about what to draw. I simply started by building up the light in what seemed to be a sensible order. I did, however, need to concentrate at this point as it was my aim to establish the forehead, cheekbones, jaw and anywhere else that might catch the light (Fig.01). 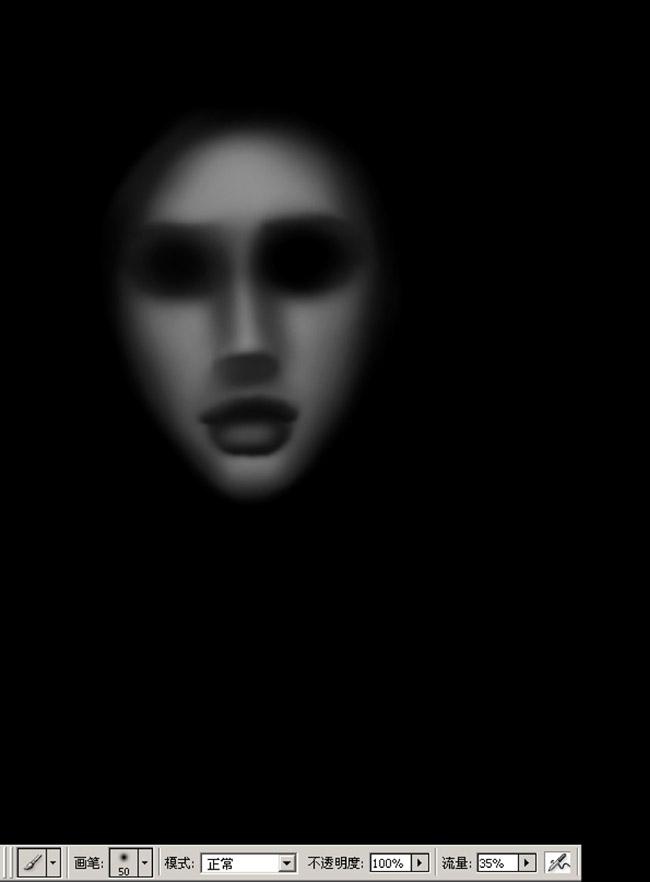 I continued to add to the areas that reflected light and defined the image according to my understanding of women's faces. I find that it is easier to keep things clean without the specific features being involved (Fig.02). 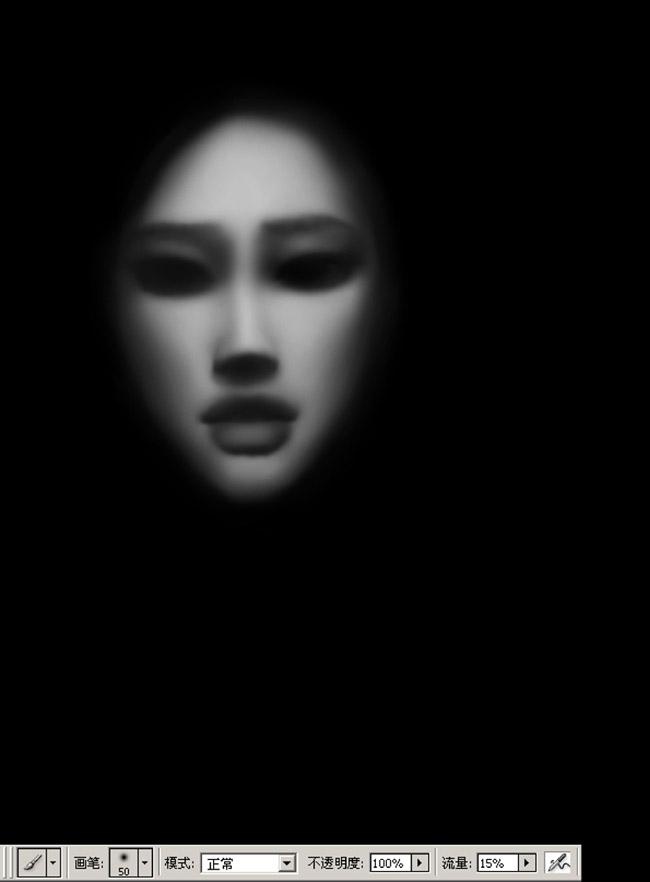 This is the first point where I started to detail any of the facial features. I usually deal with these whilst the image still has a hazy effect (Fig.03). 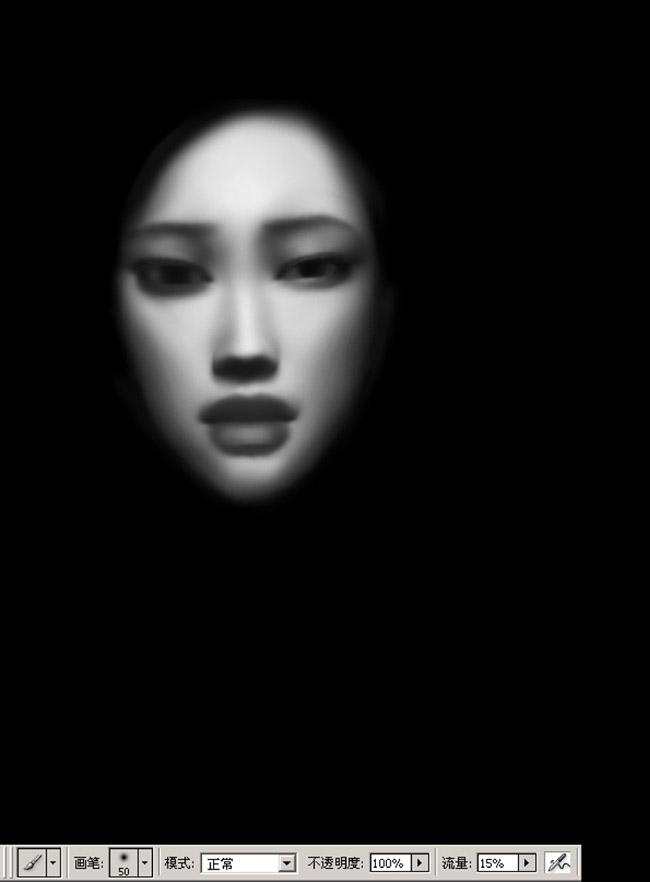 
I then reduced the size of the brush to help me start doing the detail. It is important to pay attention to the expression of the eyes and mouth. I was trying to make the face look calm (Fig.04). 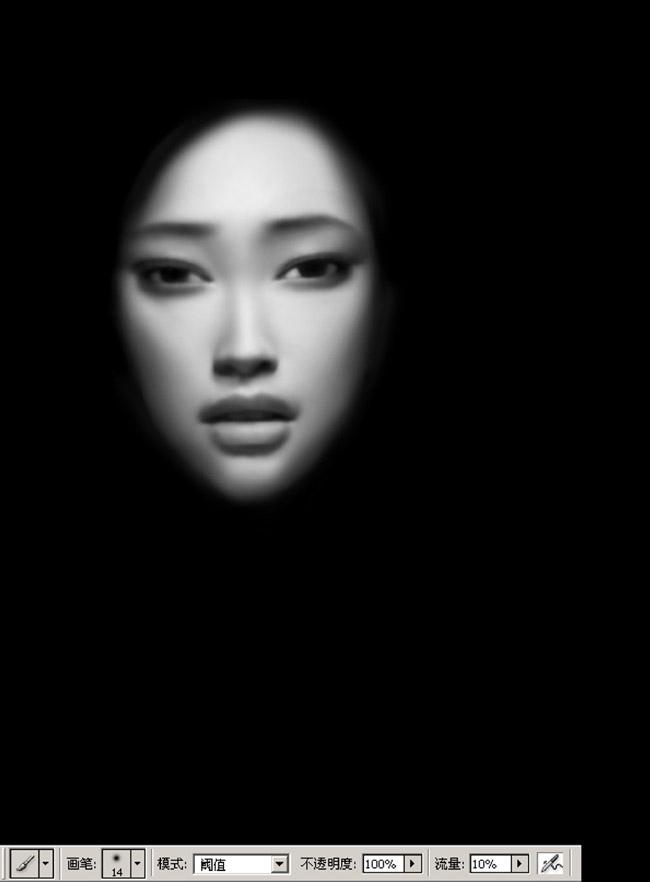 In Fig.05 you can see that I was now happy with the look of the face and started to move onto the rest of the detail. You can notice that I opened the mouth as I thought that it went better with the slightly hazy eyes. I also added some highlights to the eyes. To make the subject of your image seem soft and mellow, a good technique is to limit the impact of the bones - in particularly the cheek bones. 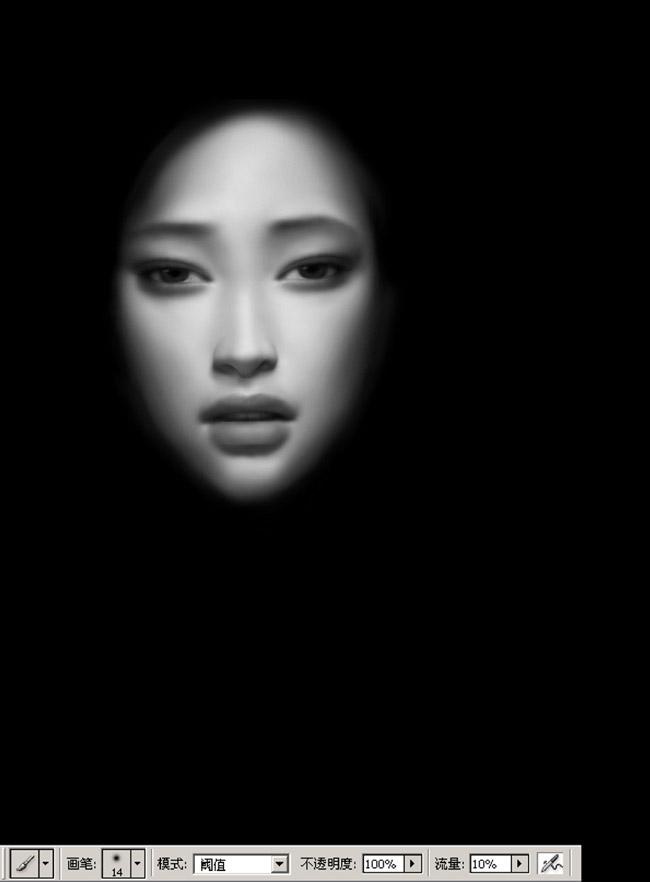 I then started to add more layers to start working on the hair and other features in the image. From this point I was able to revisit all of the layers and develop the most suitable feelings to portray on the face. When I was totally satisfied I merged the layers so I only had one layer for the face, one for the hair and one for everything else in the scene (Fig.06). 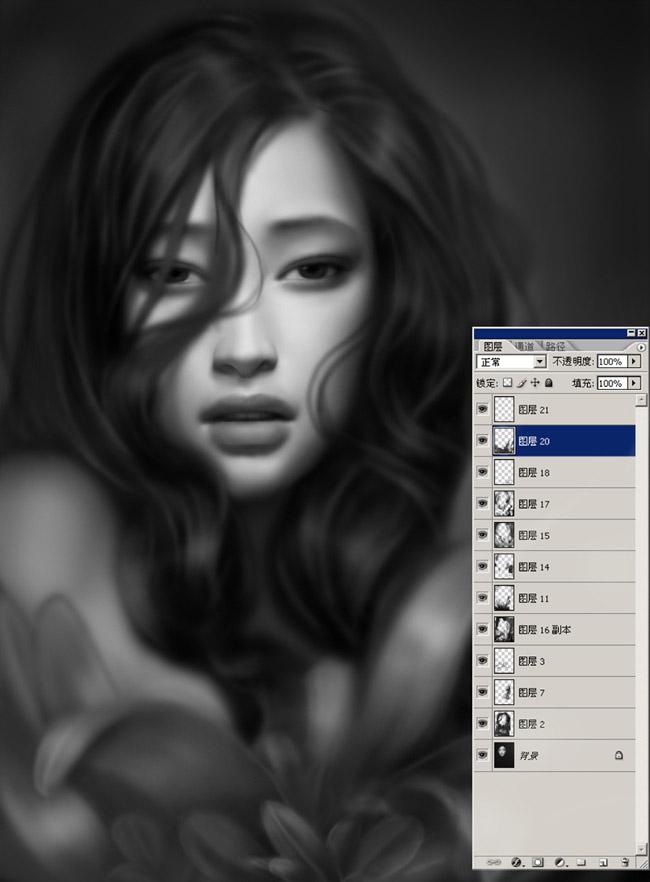 One I had finished and was satisfied with the base layers it was time to move on to the color. Firstly I added a layer over the image and then added further colors to select areas (Fig.07). If you were then to turn the layer mode to Color you would get something along these lines. The Color layer can get a little messy, which is an obvious drawback so I would suggest changing the blending mode to Overlay and adjusting it until you are happy. 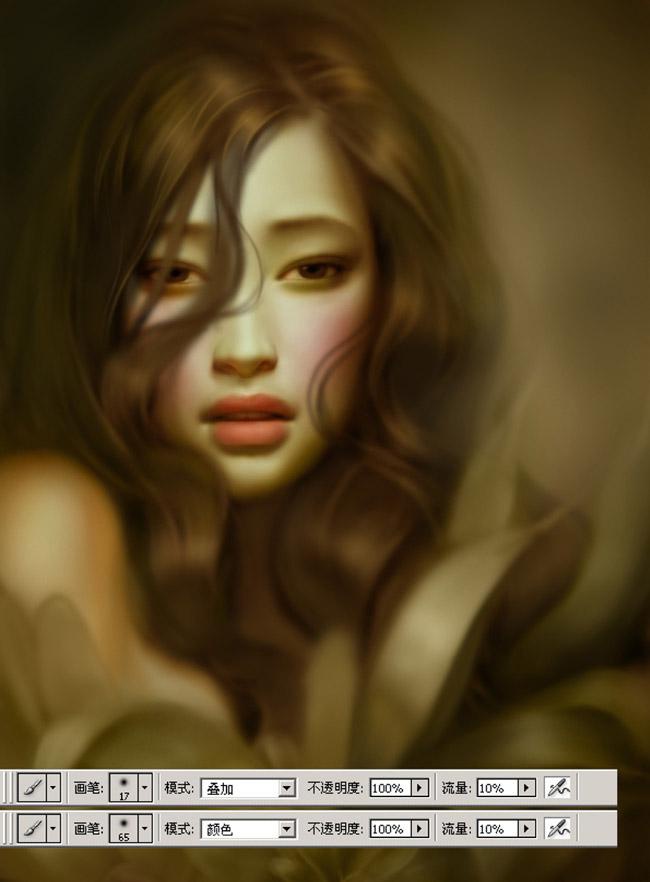 The next step was to detail the rest of the image, starting with the hair. From this point onwards I made a lot of small adjustments, starting with the face. It is important to get the correct levels of dark in the shadow and show how the skin reflects the light. I made sure that the levels of light and dark made the skin look slightly transparent. I then continued to give the image depth by intensifying the shadowed areas and distinguishing between the different areas such as the face and hair, and the hair and the background. 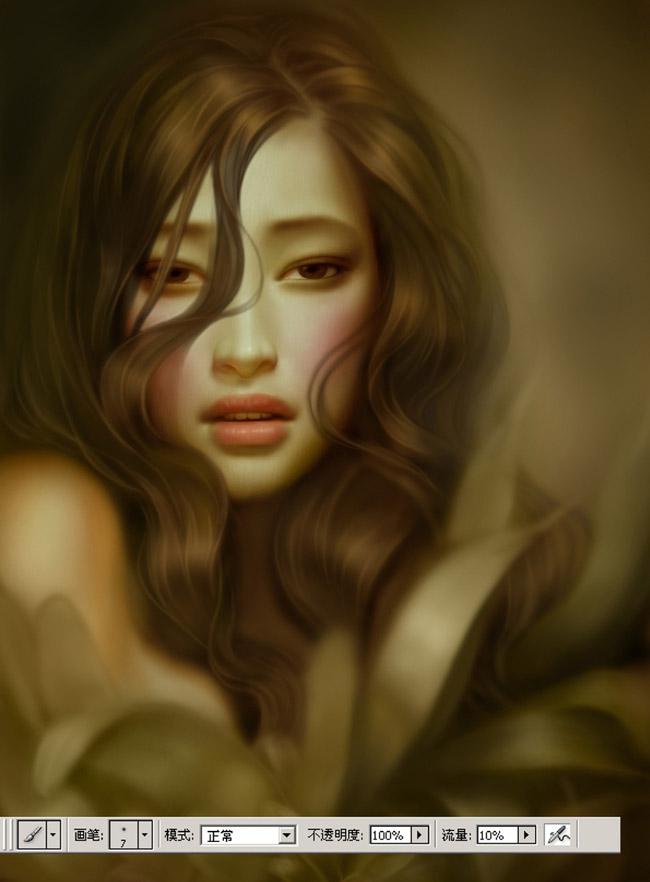 I continued to paint the hair carefully and then started to focus on the eyes and lips. It was important to show that these are reflective by using strong, carefully-placed highlights. At the same time I thought it was important to strengthen the shadows around the face (Fig.09). 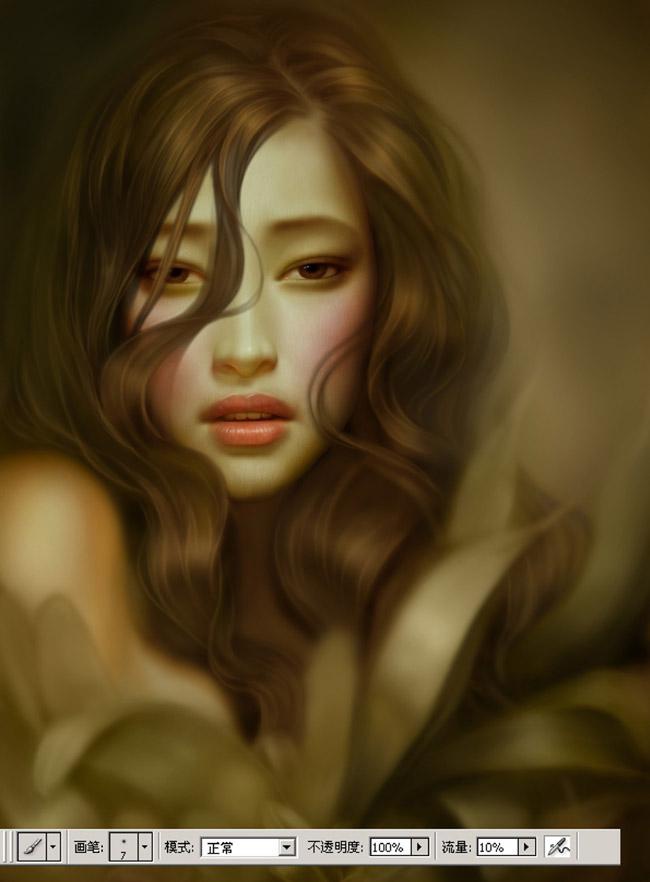 I constantly added to the face, mainly adding to the light and shadow. It is important to look at the full image at this point to get a better idea of how the image is developing, so the image as a whole can be adjusted. The next step was also to start to add some feathers. The technique I used was to draw one feather and then copy it and adjust it in the different locations. I did this over about four layers, which also contained the light and shadow (Fig.10). 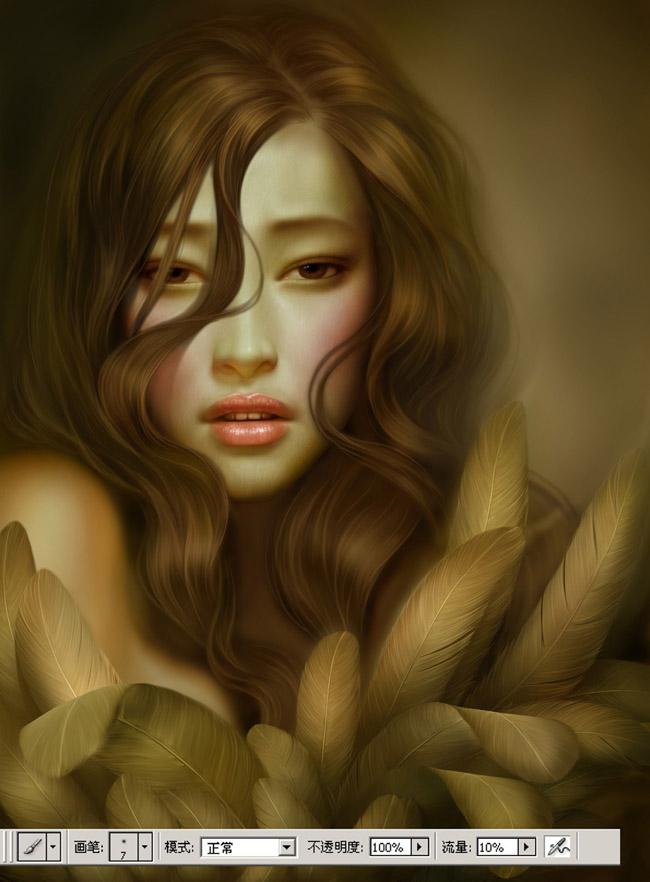 I thought that the hair still needed further work so I increased the hardness of the brush and decreased its size (Fig.11a). I also changed the brush Jitter and Flow control to "Pressure". It was very important to make sure that the hair didn't look flat by varying its thickness and transparency. You can see the brushes I used in Fig.11b. 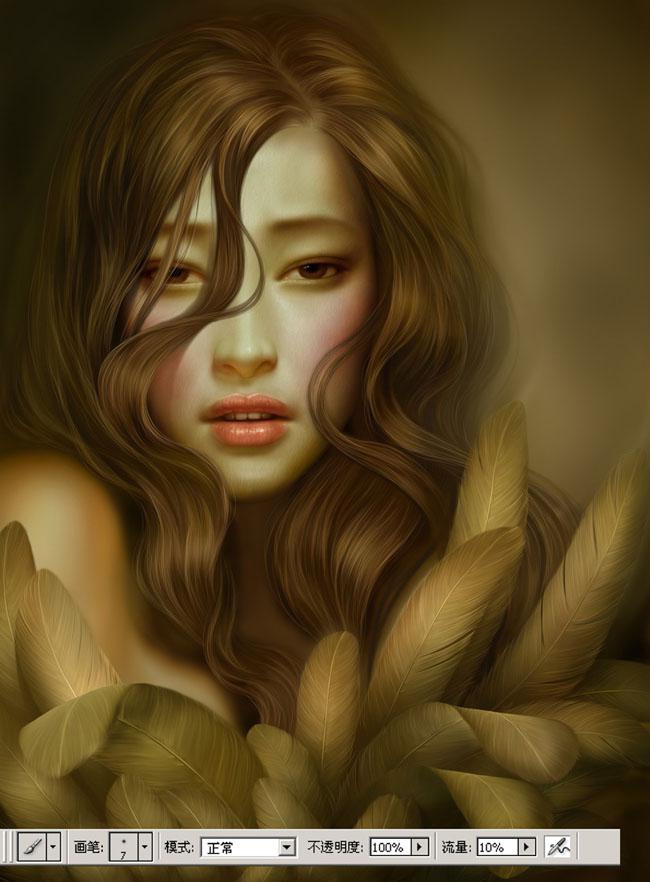 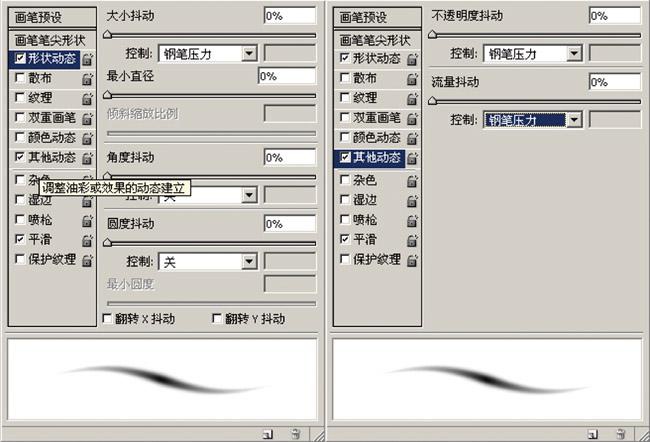 I then continue to paint the arms and neck. I also identified the parts of the hair that needed work and strengthened them by adding to the effect of light and shadow (Fig.12). 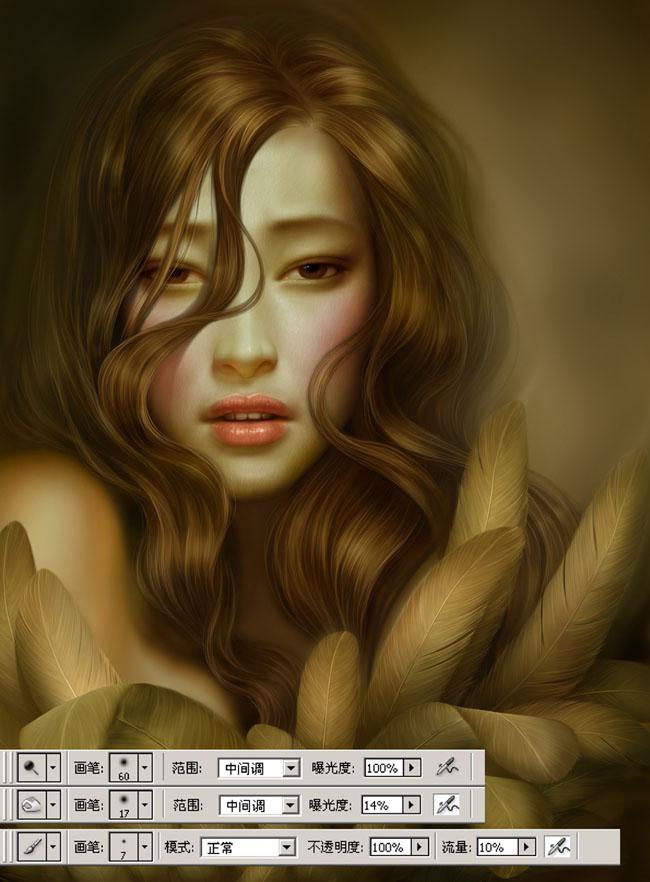 The hair was continuously developed and at this point I made new layers to make adjustments as I didn't want to adjust what I had. I also added eyelashes here (Fig.13 - 14). 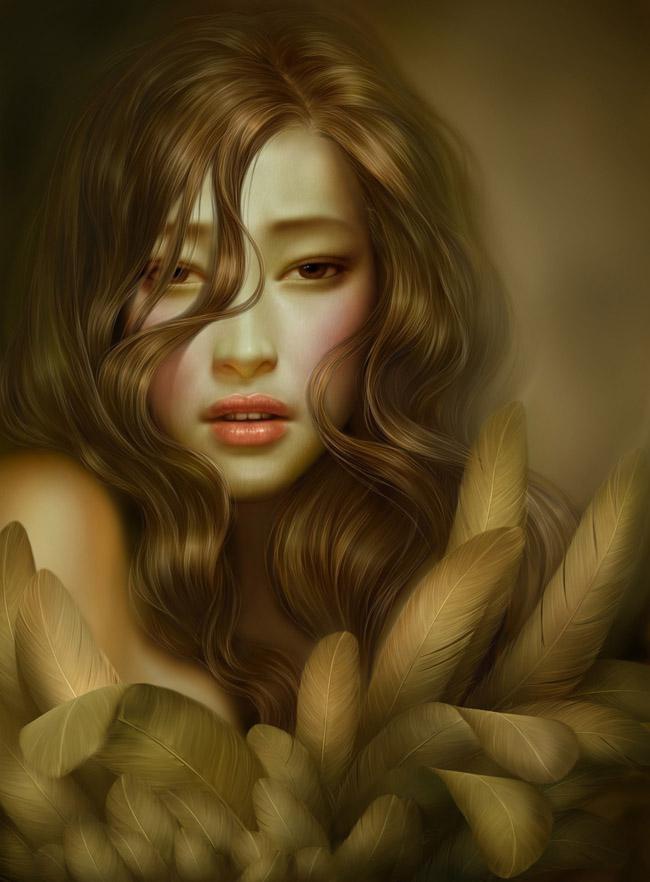 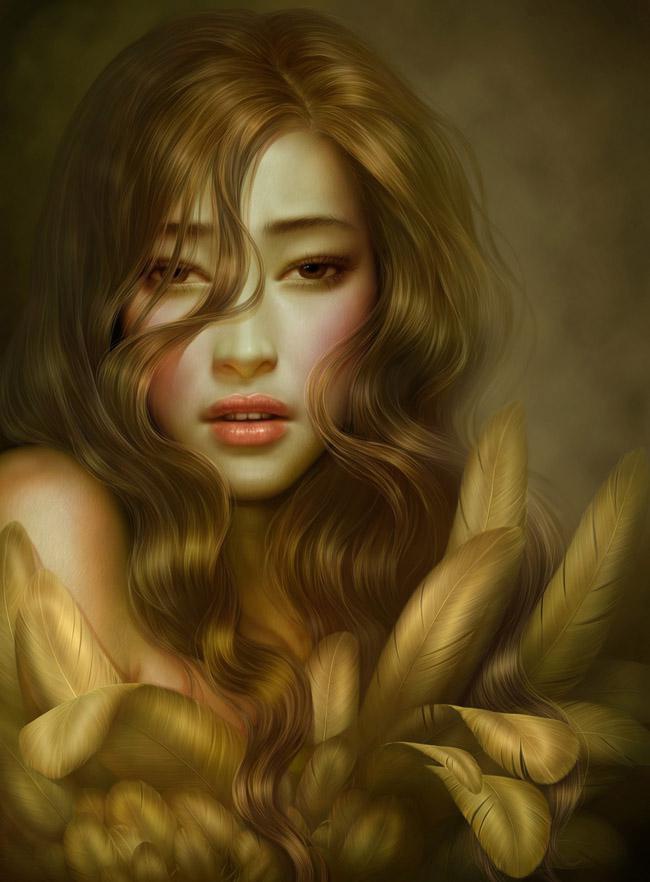 In this final step I adjusted the colors. You will also notice that birds were added. I also went back into a few layers to tweak things a little (Fig.15). 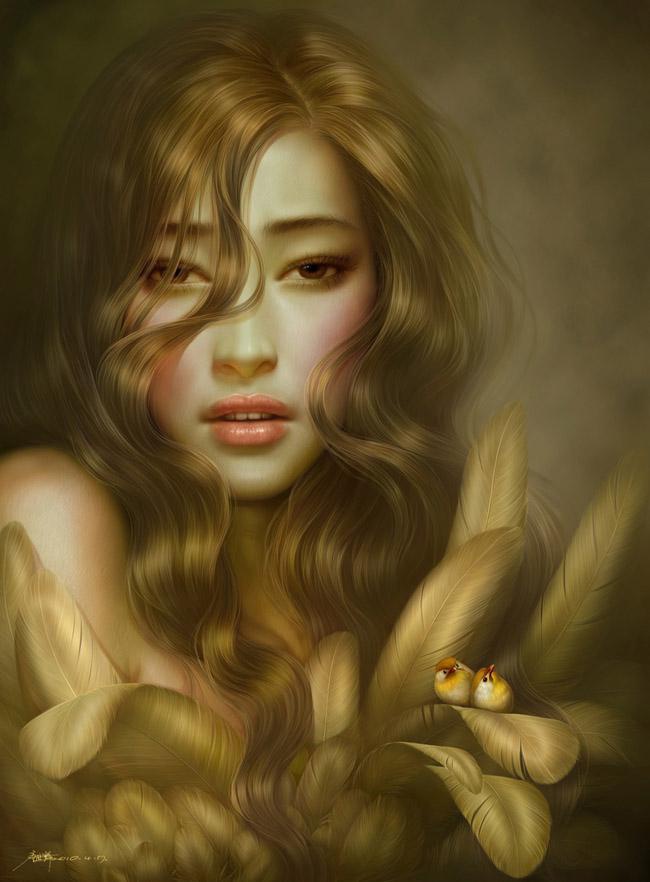