One day in the office I was drawing an unusual car. My colleague came to me and asked me about the image and how I was going to use it. I said that it was just for fun, but he then informed me about the 5th Peugeot Design Contest that had already started, and said that my rough sketch - with slight modifications - would probably fit in! I carefully read the theme and rules of the contest, and was thinking I would be able to finish it on time. With my colleague's support I started refining a new look for my car, collecting additional information and getting prepared for the project. I used 3ds Max, V-Ray and Photoshop software in this project.

Before You Start 3D

The theme of the 5th Peugeot Design Contest was to "Create a Concept Car which is designed to evolve within the cities of the future, whilst retaining the key values of the 21st century. The projects should bear Peugeot's stylistic codes and must contain the following four aspects included in this design competition: environmental awareness, social harmony, interactive mobility and economic efficiency."

The first visions that came to my mind were ideas of future roads possibly becoming very fast because of the constantly growing cities and a need for intensive communication. The car therefore needed to be fast, flexible, safe, mobile... and so these overall properties would, of course, make a big influence on its external look.

The main shape was started from a simple drop-like shape on wheels; a drop is probably the best shape that refines aerodynamics, and if we are making a fast car then we can't forget about that! I later made the wheels bigger, keeping in mind that the car had to be used for mobility purposes, and then drew some refining curves, adapting everything into one body and adding some detail. And that was the car's initial concept design - other detail was later added in the modelling process.

It wasn't easy to combine all aspects into one car, because such things as environmental awareness and economic efficiency do not come along with high speed! Anyway, I found some acceptable solutions, such as sun batteries, aerodynamics and a hydro engine.

As everybody already knows, it's very good to have as much reference material as possible when you start a project. I had about 250 pictures of other concept cars, also including rear views, interior designs and so on. Time after time I showed my work to other people and considered any potential problems with the design.

In case I need to make lots of modifications in the modelling process, I always try to make my initial object as simple as possible. This way I can simply move any parts around, adding details and remove any unnecessary parts if I need to. Only when I am happy with a shape do I start detailing my models.

All of the modelling for this project was done using standard modelling techniques; I also used the PolyBoost plug-in and some of my own written plug-ins. I would highly recommend that everyone makes shortcuts for those commands they use most often, or make their own quad menu system. Even if you just save half a second per command, these will add up and you will eventually achieve the same result a couple of days earlier!

One uncommon problem was breaking curved surfaces. I used few polygons and Mesh Smooth to make the curved surface, but when detaching parts and adding additional detail I was getting corners in those places. My solution was to copy the surface that I wanted to detail, add a Mesh Smooth modifier with 1 interaction, and collapse everything into Editable Poly. I then combined the "Mesh Smoothed" geometry part with the original part, leaving detail only where it was needed. After all that, I ended up with a pretty smooth surface (Fig.01a & Fig.01 b). 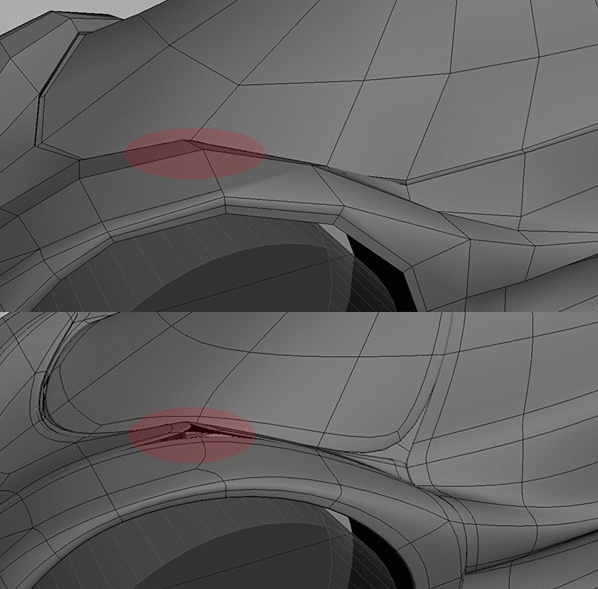 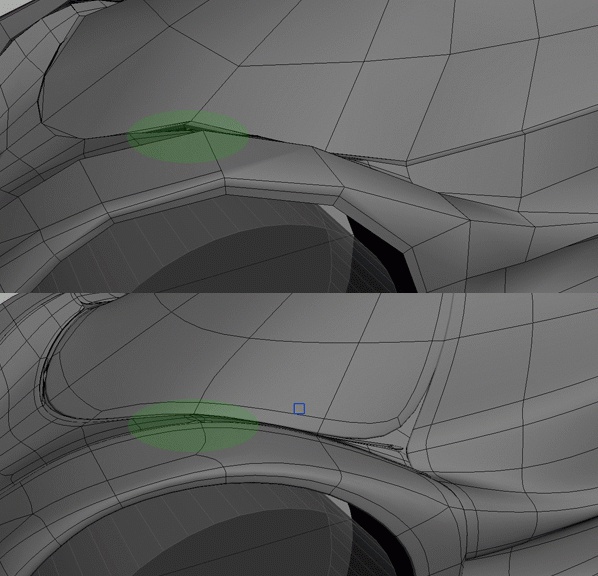 During the modelling process I was also solving all logical problems that may have looked strange and/or unbelievable. For example, I put a 3D man inside the car and checked if there was enough space for his legs. Another thing was the air passing through the car. It starts by entering the grid at the front, and then the cooling radiator is located behind the front hood. After the air passes through the side arcs it's being cooled again, and with additional air it refrigerates the main engine (Fig.02).

With the modelling part done (Fig.03), I started making the rig. The reason why I did that was so that I could show the car's mobility abilities, and also use the rig in an animation later on. 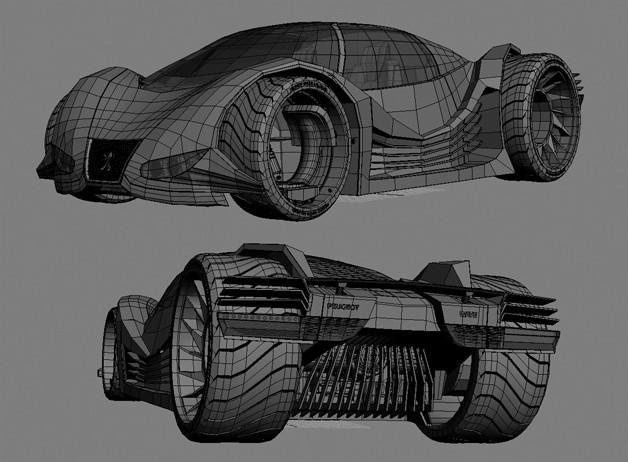 My rig consisted of lifting, steering, moving forwards/backwards, rotating left/right, rotating front/back, and suspension for each wheel. I later also added a couple of additional controls to open the doors, and a back spoiler. And that was pretty much enough for everything that my car was going to do (Fig.04).

What about an animation...? Well, I didn't make that in the end, because my animation rendering times were way too high according to the deadline!

Almost all the materials used in the car's shading were procedural. I used maps only for the interior cloth and leather. In my opinion, there was no need to un-wrap the model and add some kind of dirt near the wheels or anything like that. I thought that the best presentation for my concept car would be in a clean studio render with clean reflections, where you can see the shape of the car without concerning yourself too much with reality.

The lighting consisted of one key Spot light, two side VRay lights and four big Reflection lights that didn't light the scene. I also used a chrome HDRI map in the environment slot. For rendering, as you will have already noticed, I used the V-Ray rendering engine, and in Fig.05 you can see my lighting setup for the render from the back. Here I have also outlined the rendering parameters that I paid most attention to before rendering.

These were the additional rendered elements:
Matte Shadow - to adjust the intensity and colour of the shadow;
Self illumination - to add a glow to the lights later on in the post-production stage;
Specular - to adjust the intensity of shine, or to add some glow to shiny areas;
ZDepth - to add depth to the image;
RenderID - to select and adjust separate parts of image in, let's say, Photoshop

So I took my images into Photoshop, made some colour correction, a few changes, and here is one of my final images (Fig.06).

Here is another render (Fig.07) in which I used only one Key light - no Reflection planes. The HDRI represents the photo into which I wanted to compose my render. I also modelled the rough environment geometry, which can be seen in the reflections, but rendered them as matte. 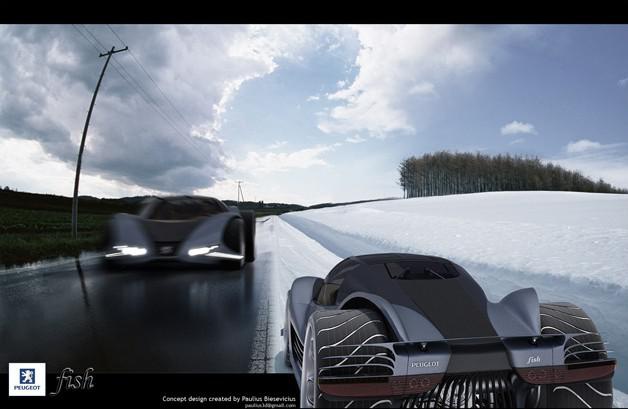 And the final one (Fig.08) was placed in a 3D environment that my friend gave to me. It was already textured and I only made some modifications to the geometry, changed the lighting and adjusted a couple of the environment textures. 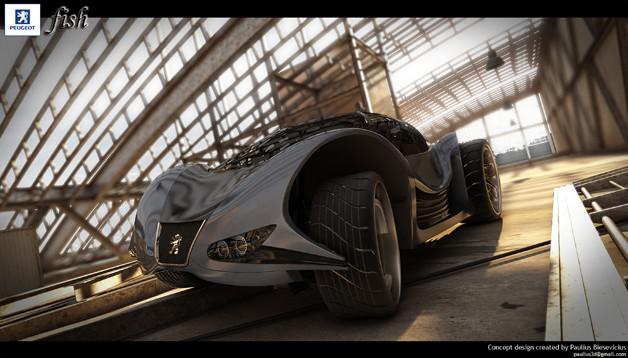 Thanks for your attention and I hope you have enjoyed reading this article. If you have any questions, please feel free to contact me.