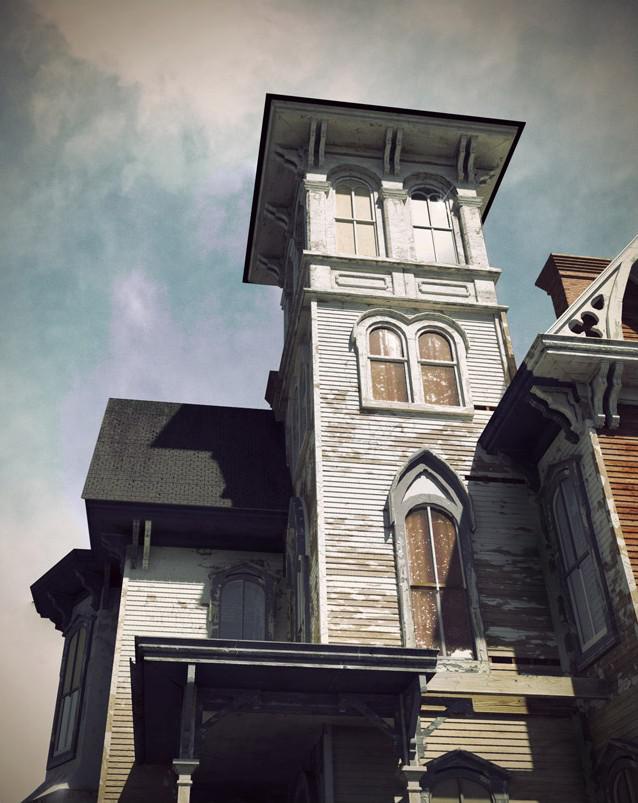 My goal for this image was to create a high resolution, realistic render of an old home that looks abandoned and worn down from the conditions over time. If there is an owner, they haven't bothered to take care of it for many years. After searching for a reference point for several days, an old Victorian home caught my eye. While the original picture was interesting, I didn't want to simply re-create the same image and thus began an active brainstorming session to improve what was already there (Fig.01). 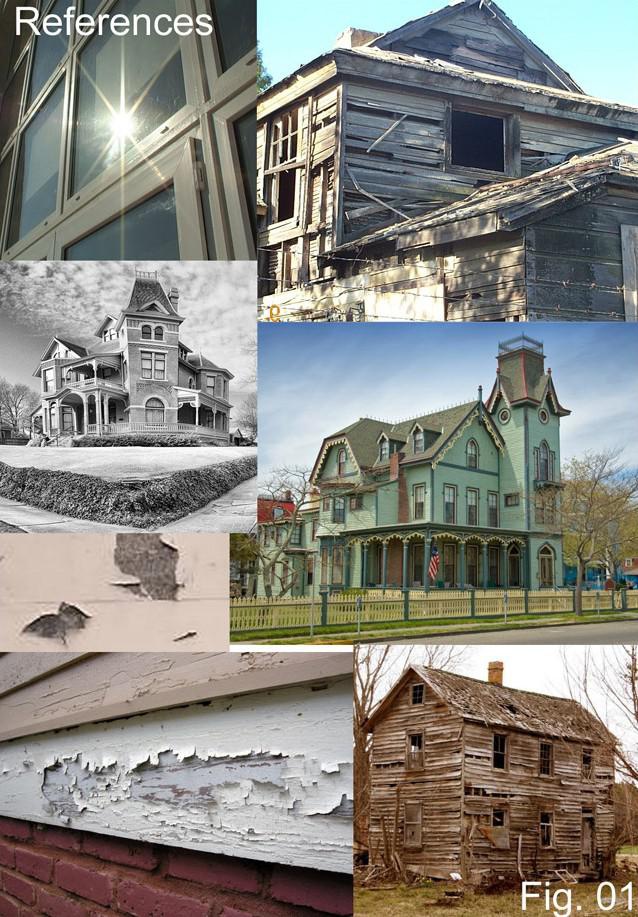 All of the modeling was done in 3ds Max and is very basic.  Most of the details in the work were created with the texturing. I wasn't looking to use Normal maps, so it was very important that I modeled out every edge completely (Fig.02). 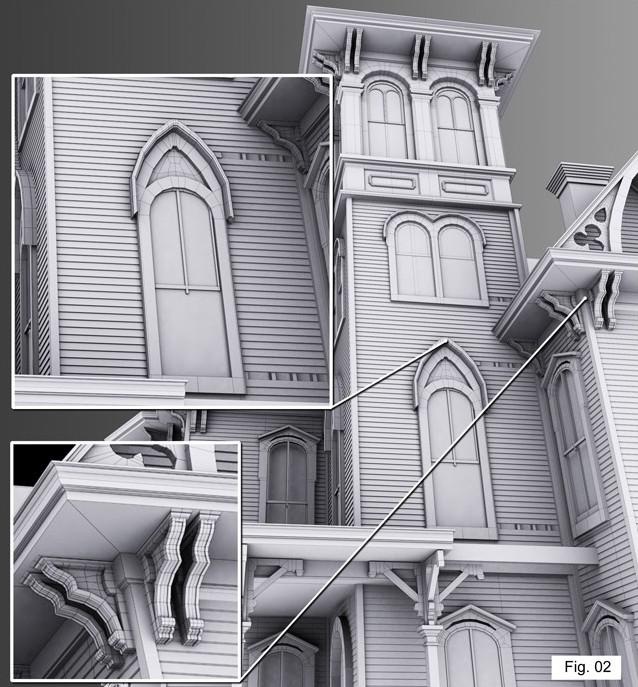 One of the things that I really liked about the reference image was that it had several different styles of windows rather than just one. Because of this, the time it took to complete the modeling of each window increased in order to ensure that the slight variations of each window was noticeable (Fig.03). 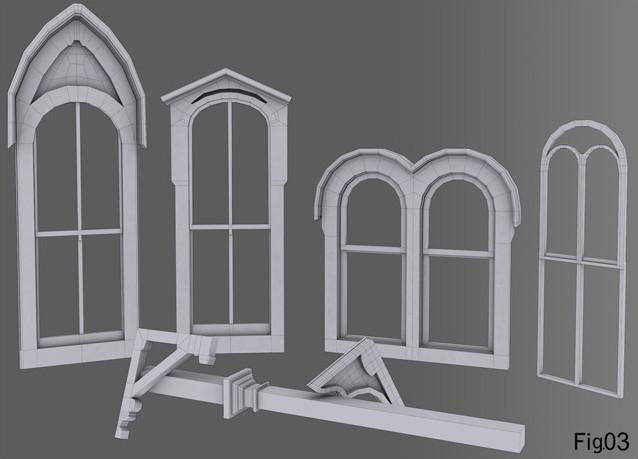 In the second layer, I found a reference of cracking plaster and duplicated it evenly over the "ledge texture" wood base. With the second layer still selected, I then used a rough-edge brush to get variation with each edge. This was done in conjunction with erasing the areas where I wanted the paint to peel away from the wood. It should be noted that this process was done mostly around 90 degree angles in the modeling (Fig.04b).

After I was satisfied with it, I started to gradually weather the paint with a dirty concrete map that was set to a linear burn with a low opacity for the third layer (Fig.04c). As a result, I started to lose the clarity of the boards below the paint. To fix this, I duplicated the base layer of wood and placed it above all of the grunge layers. I then changed the layer style to Overlay. Keep in mind that you can drop the opacity setting if you want the paint job to appear newer (Fig.04d).

To complete the texturing process, I created another layer. I painted on this layer using an Oil-Medium brush. With this brush I set the opacity to 50% with the understanding that I would most likely be adjusting the opacity layer later. I then painted quickly along the seams between the ledge and where the wall would be. Finally, I set the layer style to Color Burn with a fairly high opacity. My end result can be seen in Fig.04e. 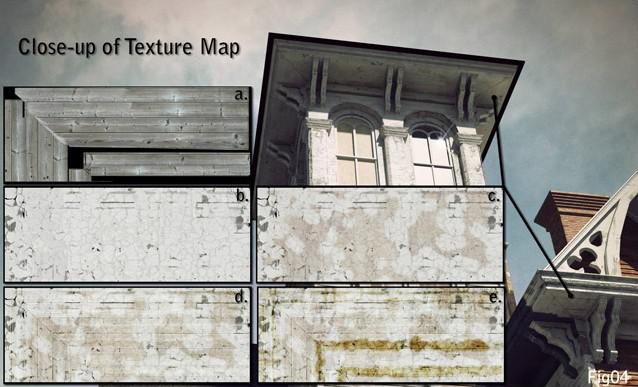 In order to really push the visual details and ensure the image will hold up at a high resolution, I like to use Composite maps. By using 2048 x 2048 resolution for your textures, your render quality will look better in small to medium areas, but for larger areas we all know you need to use tiling. Using Composite maps to make your texture look more realistic can be done by breaking the tiling up into multiple layers; this can easily hide any pattern you might create from tiling the base texture (Fig.05). 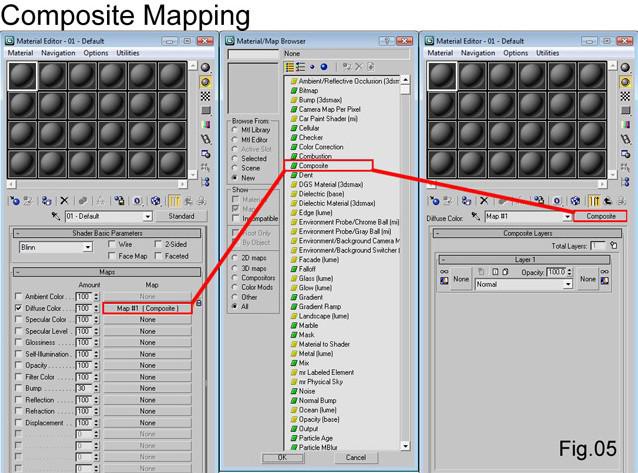 For the walls, I used two basic layers for my Composite map. In this case, the wood boards acted as the base. For the second layer however, I used the cracking plaster texture again. Initially this didn't look like paint chipping off of wood since I needed to isolate specific parts of that texture. An Alpha map did this for me (Fig.06a - c).
Once this was completed, I simply duplicated the Composite map into the other necessary map slots and I was finished! 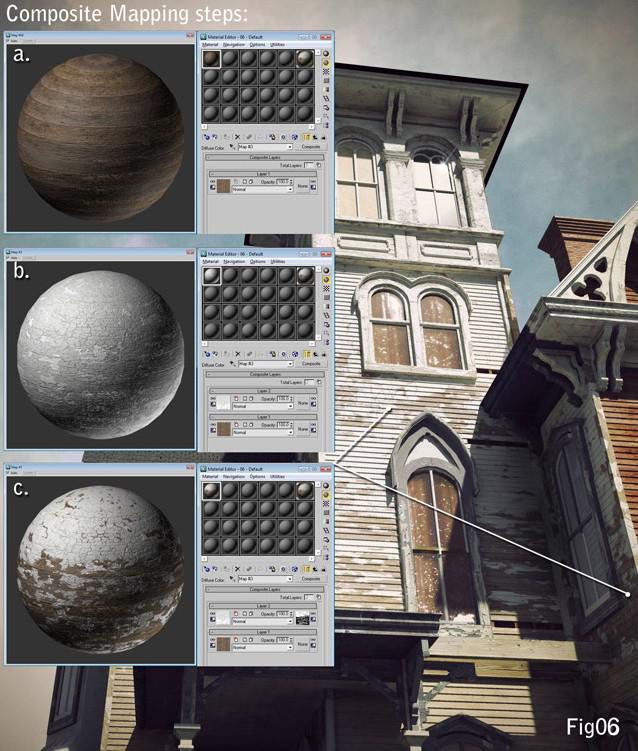 For the "Old Mansion" I used the Daylight System for lighting. To get the look I wanted I made some manual adjustments that altered where the sun was in the sky. My goal was to give the impression of mid-day lighting (Fig.08).

For the final composition I rendered out a Diffuse pass and a Lighting pass using a basic Ambient Occlusion (AO) material. For the Lighting pass, I made some adjustments in the environment settings. I exaggerated the highlights and shadows, creating a high contrast. After I created the two render passes, I combined them in Photoshop. Within Photoshop, I set the Diffuse as the base layer and the Lighting pass as an overlay layer style (Fig.09). 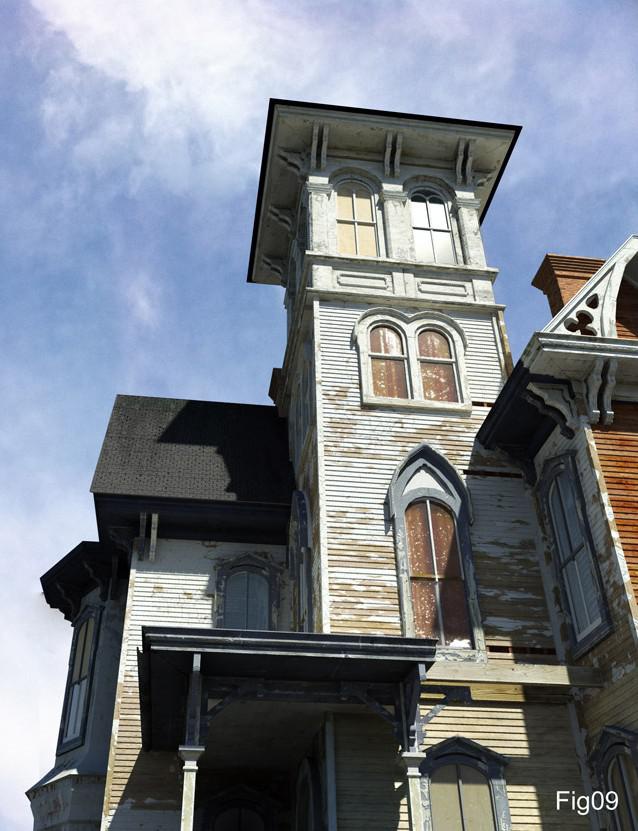 In my post-production of the image, my goal was to make the actual picture itself appear aged. I wanted the picture to look as though it were taken many years ago and had faded over time  I did this by using some basic color correction adjustments and by adding a vignette to centralize the focus of the image.  To finish it off, I made some minor tweaks with the window grime and added a sun reflection in the upper window for an added touch of realism (Fig.10). 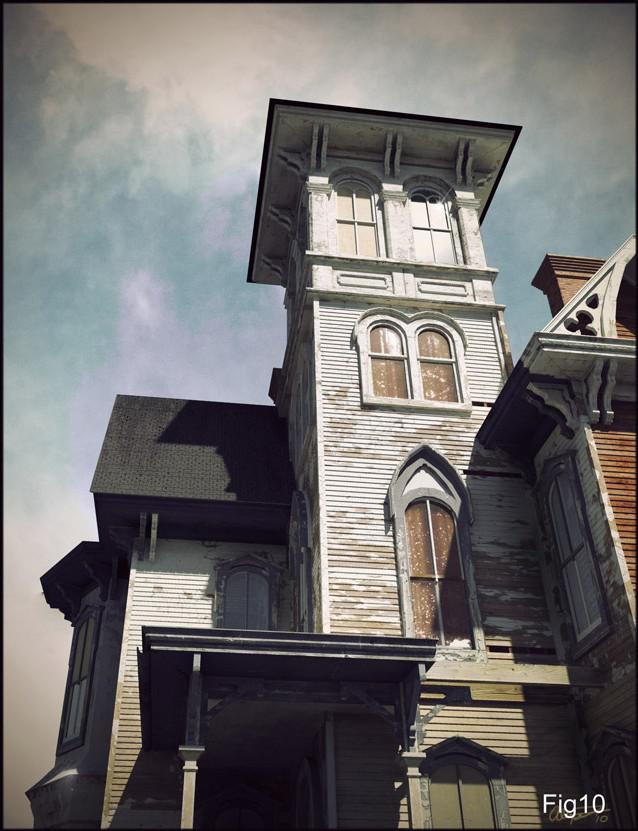 I would like to end this by simply thanking everyone at 3DTotal for the opportunity to present this "How to" and for including "Old Mansion" in the gallery. I have learned a lot from other artist's "How to's" and I am excited to be able to give back to this community. I hope everyone finds this informative and useful for future projects! Lastly, if anyone has any questions about a technique that I have used, please let me know and I will be happy to work with you.