Making of “Offering to Cthulhu”

The villagers are offering a sacrifice to Cthulhu in Andy Walsh's latest tutorial for Photoshop, 3ds Max, and Daz-3D...

I've always loved the mysteries of the deep, the fishermen's tales of colossal sea creatures and stormy seas. So I knew some day I had to have a go at something Lovecraftian like the Cthulhu mythos. The main vision in my mind was of a low horizon line as we look up at the giant Cthulhu as he postures over a small fishing village. The question was how to make it happen in terms of workflow and how to best execute my idea.

Sometimes I start with research and sometimes I start with thumbnails. This time I wanted to see what ideas I could get down before figuring out what kind of research needed doing. I did look at some artwork in which the composition was looking up at something large, just to get an idea for the kind of perspective, but no formal research was done. Now, it's important to note that if you're not too sure of what you're going to paint, then your thumbnails should all look fairly different to get some variety. In my case I knew exactly what I wanted, kind of, so I just explored variations on that image to nail my vision. I think the third or maybe second thumbnail got it. You can see elements of the final comp in those two. Basically, I wanted one or more large buildings to show just how big Cthulhu is - if those look big, and he dwarfs them, then we can really sell his size. 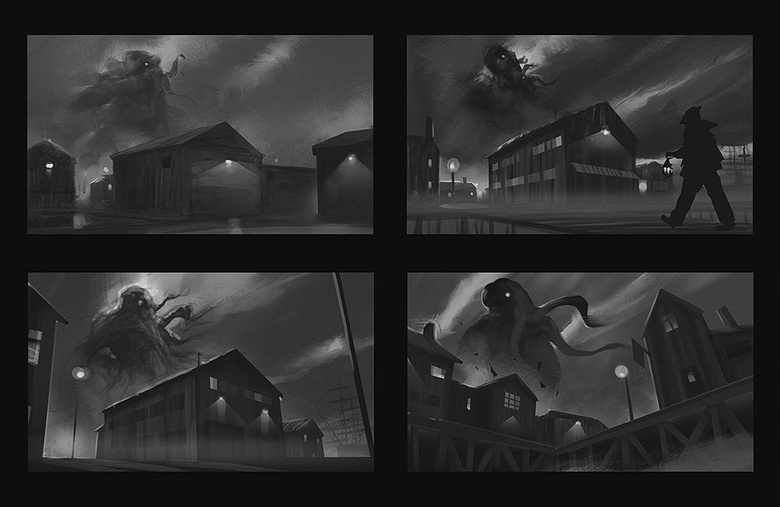 Trying to nail the composition

My research was two-fold for this particular project. I needed to check out some old wharfs and docks but I also decided to take some art inspiration into the final painting. For the photographic aspect, I looked online but also had a few images of my own from a trip around the islands off the coast of Seattle. For artistic reference I looked at my favorite digital artist, Piotr Jablonski. I love his values and edges but also how he simplifies buildings so they're half realistic and half made-up or stylized. It's important to not just research photos but also other artists, especially awesome ones like Piotr! 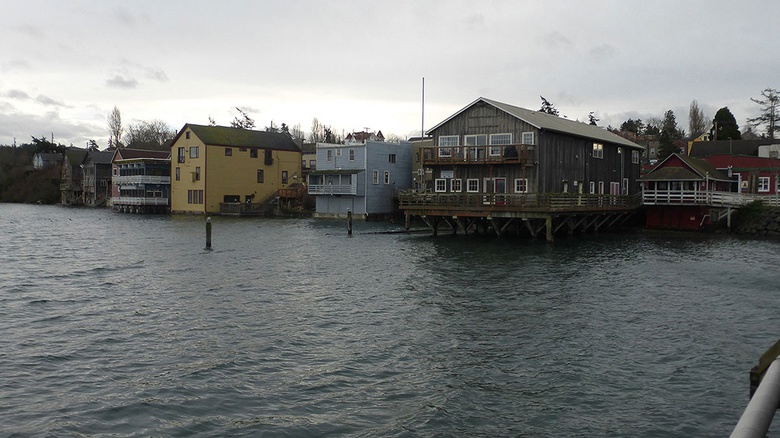 From a trip to Coupeville, Washington. Great old wharfy town

For the longest time I wasn't sure how to actually put this together and maintain perspective and scale as well as a powerful composition. It's very hard to do this with a three-point perspective by hand, so I decided to go into 3ds Max to mock things up. I also used Daz-3D to pose some characters which helped me out with scale and anatomy - not my strongest point. This process really helped to tighten up the composition and place everything where I needed so I could focus more on mood and story without stressing about certain technical aspects. Use the tools when they're needed! For me, I settled on a circular/triangular read of Foreground dude, Cthulhu and mid-ground dude/s to keep our eye moving around the composition. I had the idea that some local villagers were going to sacrifice this poor guy to their demigod as part of a cult ritual.

Establishing a shot is almost always easier in 3D

I again went back to Piotr's work and had a look at the brush work and colors. I blocked in the basic tones - warms for the buildings, cool green/blue for the sky, but inside the building's tones is a little variation in temperature so it's not monotone. It's a good idea to have variations in temperatures so colors don't look too flat. So you can see some grays, purples, and browns next to each other to create vibrancy. It can be messy at this stage as you'd be mostly covering these marks later - it just forms a basis.

Laying in the initial palette

I start to take some of the photo reference pictures I found and integrate them into the paint. It has to be loose, and again, referring to my art inspiration, I'm trying to combine the photo elements with the paint rather than just slap them on and call it done with bit of layer blend modes. I might use an overlay but I might just color-correct the photo to match the tone of the under-painting and then paint loosely over the top.

Although there's a fair bit of ground covered between this step and the last, it was all very much the same process of integrating the photo textures loosely. Now on to the characters. Our main character and first read is our 'offering' who was posed in Daz-3D. It's important to get rid of his 3D-ness by loosening the edges with a smudge tool and also painting over anything that looks too 3D. It's up to you and your artistic ability as to how far you take this step. As for the little guys, I mixed a tiny bit of photo with paint, trying to keep it a little gestural and simple. I'm not great at characters but I've started to understand that it's less about creating a fully 'accurate' structure and more about attractive and dynamic shapes, at least at this scale.

Stay loose with characters too

I thought the overall sky value was ok but then I dragged in a photo and it suddenly got brighter, but looked much better. It was really just the puffy lit clouds that I kept, which I distorted and bent and color-corrected to pull the eye in to that area where Cthulhu will stand. It's kind of subtle but the lines of action in that sky all point into the scene, following perspective. 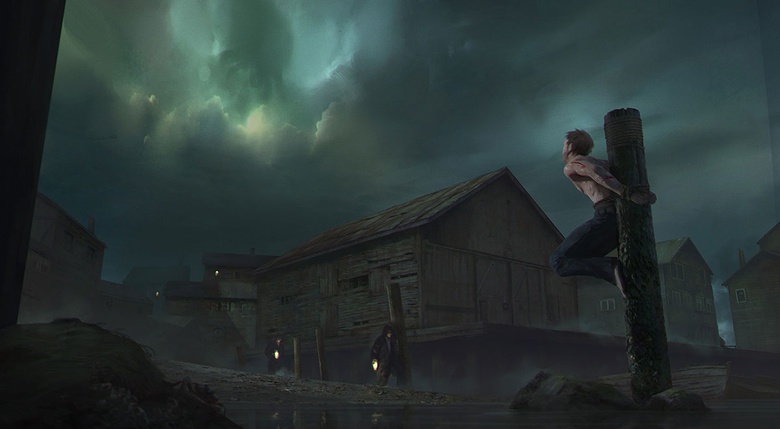 Even sky and clouds are an important tool for composition

I'd been postponing this for a while because obviously Cthulhu is our main dude and I wanted to get him right. Now, what's interesting here, and worth noting for fellow students of all things drawing and painting related, is that prior to this painting I had been getting back into sketching with pencils. During that phase I was studying the pencil-work of an artist who goes by the nickname of Tentacles and Teeth. He draws lots of monsters but has a thing for Cthulhu art. I gave it a try myself and, it turns out, learned a little bit about drawing/painting a tentacled creature thing. So this process, while I did worry beforehand, went well and I owe that to those pencil drawings. If you're struggling to paint creatures, maybe try it with a pencil first and, again, look at other artists for inspiration.

So I finished up the details on Cthulhu's face and added the original hand as seen in the Daz-3D mock-up. I just tweaked it to look more monster-ish. I really wanted at least one hand or claw in a great and awful expression of power. I made sure to smudge out some of the harder lines throughout the scene which is always key because either in photos or real life, perfect edges don't exist. Other elements that were added were some rain, some wetness/gloss here and there and some extra direction to the cloud perspective. I did ponder whether Cthulhu needed to be fully in-frame at this stage but I intentionally left him as he is to give the impression that he continues out of frame, which is a technique for exaggerating scale. Long live the tentacled one! 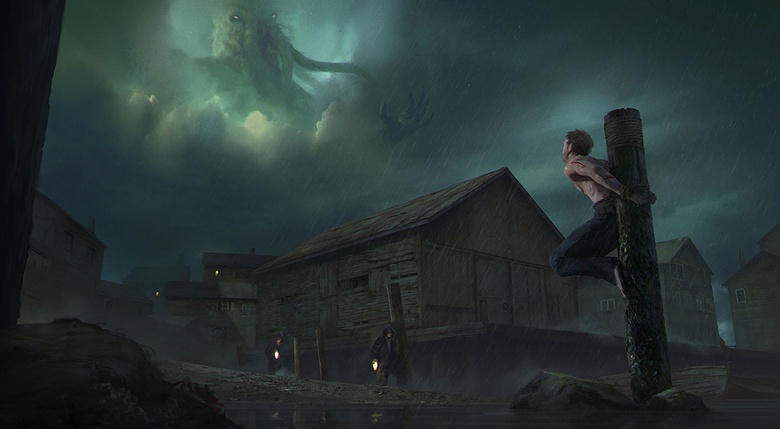