Making Of 'My Ten Wheel House'

Hello, my name is Daniel Iulian Vijoi and I'm lead artist at AMC Studio, a Romanian game development company based in Bucharest.

This illustration was made for fun, the purpose was to try something different from what I usually do - game art. I wanted to picture here something that is more of a lifestyle than a few objects gathered around; there's something about the pleasure of driving and loving everything about cars. I took my inspiration from American hotrods and brought in iconic items to get a better feeling about the scene. Those guys are living there, everything they do is about cars, driving and roads; that "thing" is their home. They have everything they need in that wheel house: fuel, gas, water, satellite television, cinema and even a generator under the carriage. This could be something between cartoony and real, something you can picture it in a movie like Pixar's Cars or in a similar environment.

Here are some images I gathered for inspiration from the Internet (Fig.01). From these references I started with a quick, simple sketch, just to put all the elements on paper, later starting to detail each one of them (Fig.02). Based on the sketch, I started adding base colours, shading and detailing some areas (Fig.03). 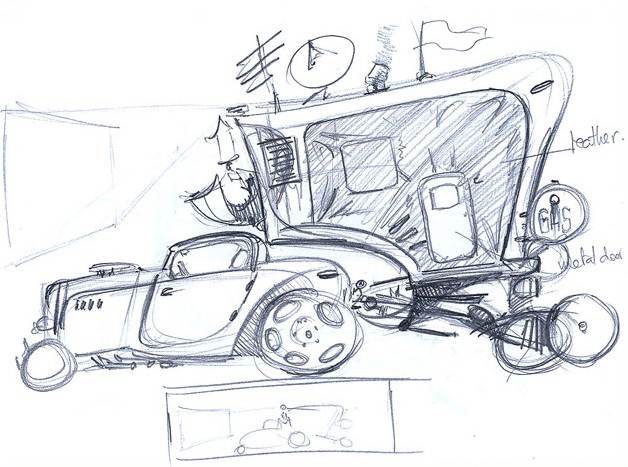 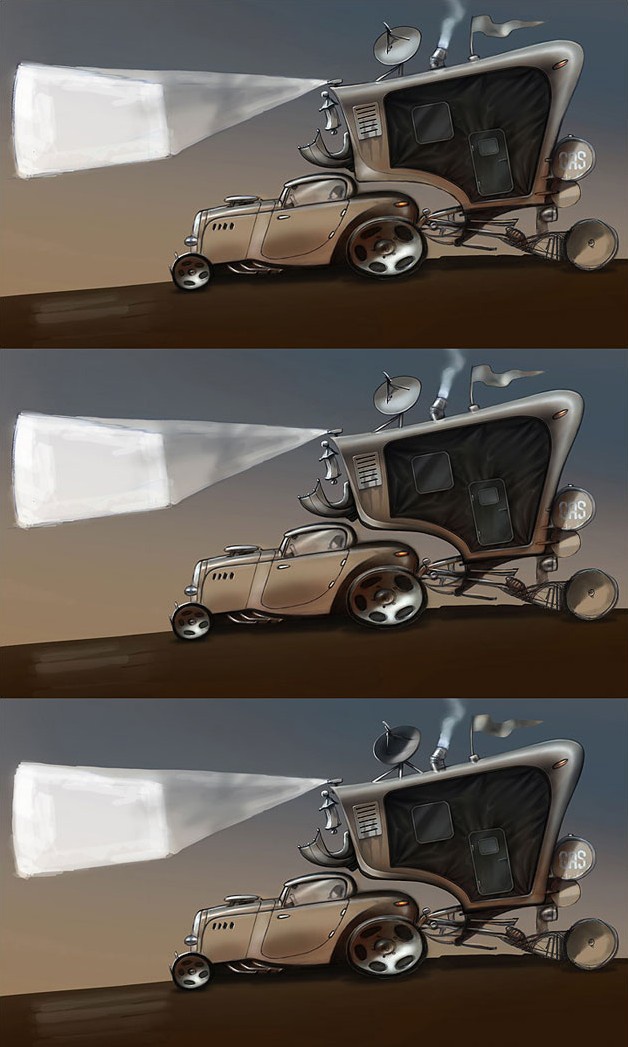 Here I've detailed how I painted the leather area on the base drawing using the Smudge tool in Photoshop (Fig.04). I put the smudged layer, set to Multiply, over the coloured area. This was how I started out with most of the details. Here is a step by step similar process, starting with some very simple lines and working towards a very nice fabric (Fig.05). It is very helpful to study at home, or on the Internet, to see how different materials look when exposed to light. You can achieve this result with the Blur tool as well, but you have much more control over the shading with the Smudge tool.

I continued detailing some elements (Fig.06). For a precise edge I use filled selections for all important elements of the artwork in a separate layer group - here are some of them (Fig.07). Anytime I needed to work on a specific element, I simply selected the named layer from the layer group that contained all the selections. 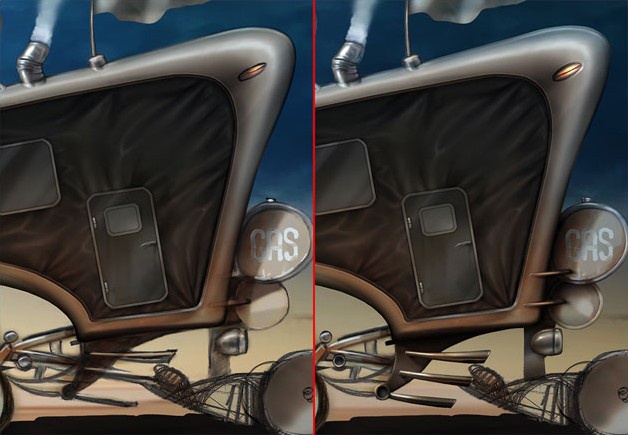 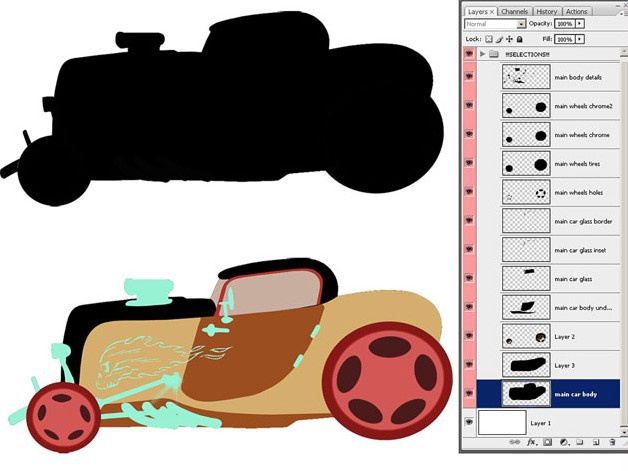 This next image shows how I used the same smudging technique to make the shading for the flag (Fig.08).

The easiest way to handle many details which must have the same lighting and shading is to first keep as few layers as possible. I usually use a base layer for colours, a second one for the dark shading on Multiply blending mode, and a third one with all the highlights and the light shading set on Overlay blending mode. Besides these three base layers (or layer groups, depending on complexity), I can add different layered elements such as rust, chipped paint, lights, dirt, stickers - each of them in a separate layer or layer group. It is very important to keep the PSD file as optimised and methodical as possible, but it isn't necessary to keep it in this structure no matter what; you can find a structure that works best for you and your own drawing methods. What is really important is to keep the PSD in a meaningful form, making it easy to select and change any shape or colour very quickly. It might also help if you keep some layers and groups on specific colours to better recognise them. You can change the colour of your layer/layer group by right-clicking on the eye icon and going to "layer properties" or "group properties", and then choosing the desired colour from the colour tab. Here's how my layers and groups looked (Fig.09).

For this artwork, I chose to make the light shading and highlights on the same layer with the base colours for a faster process. In the next image I detailed and added new elements step by step, being careful to keep the same lighting and mood all over the artwork's composition (Fig.10). After this I did a bit of colour tuning to saturate some colours, adding lights that were turned on and few other details (Fig.11). 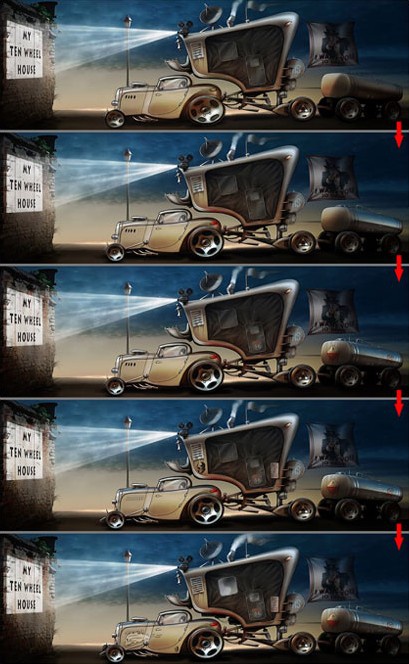 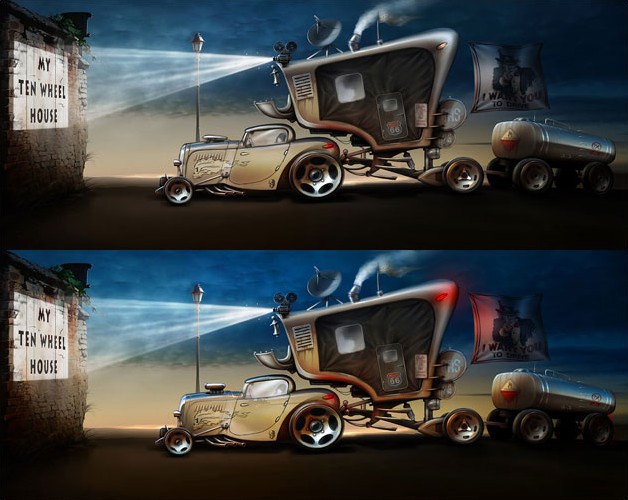 You must be careful with the materials you want to draw; shiny ones reflect light and the environment more than others. Here is an example of how it works - for these effects I usually use the Colour Dodge tool (Fig.12). But, there is more than this: some materials, like glass, are transparent or semitransparent, and depending on the material type they can amplify or attenuate the light or the colours they reflect. Here are some glass examples from the finished ground (Fig.13). 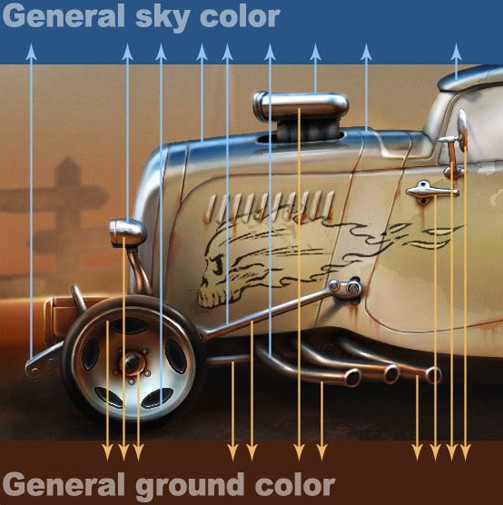 I continued finishing up some details, adding dirt to some meaningful areas to make the hotrod more believable. Although this is not a photorealistic artwork, it still had to be credible. I saturated the sky and the ground a bit; the selections of the main elements helped me on this one a lot as it is much easier to select the area to paint on instead of drawing over all the details and erasing from non-desired areas. This last process was the most time consuming (Fig.14). 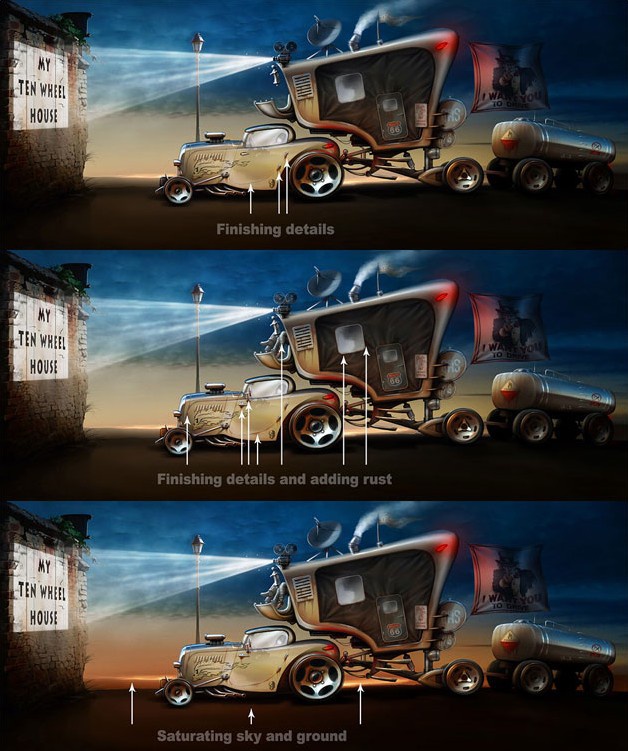 I detailing the ground area next, adding vegetation, garbage, grass, depth between objects, adding rocks, and other stuff (Fig.15). 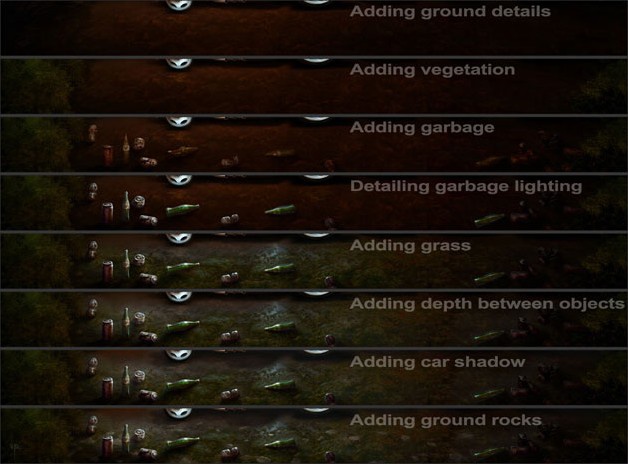 As mentioned earlier, I was playing a bit with the depth of field, adding a layer on top of the objects and painting using the selections that I saved earlier. Using the selections I was lighting up objects a bit that go to the back of the image, and taking down the contrast a bit, too. This can be observed in real life when objects go into the distance and lose their colours, contrast and detail. It gets harder and harder to see them clearly. Here is a demo of how you can achieve this very easily (Fig.16). In the second image I added a bit of blur to the back; in the third one I de-saturated the back a little; as the last step I painted with a very low opacity brush, using the Soft Light painting mode over the back objects, lighting up those areas. 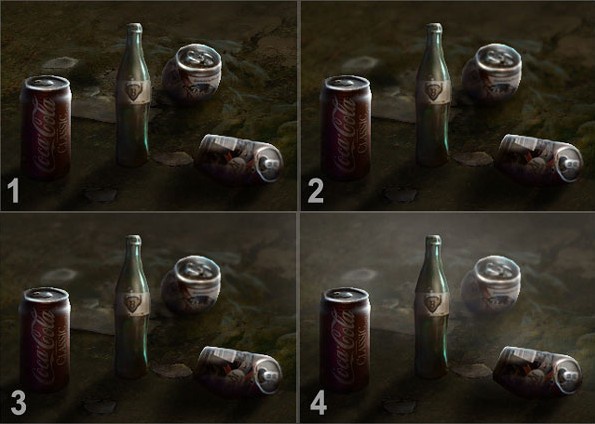 I hope this has been an interesting making of article for you to read. I will leave you with the final image (Fig.17). Thanks for reading!