Hi, I would like to write a little bit about my scene "helms deep", including modelling, lighting, and the major part, texturing.

The castle itself was made with polygon-modelling, I used some references from the LotR-DVD, but sometimes it was quite hard to get the details, so the castle in not really authentic, there are also some of my own ideas. I started with the long wall.

I created a standard box, cut the details I needed and extruded. Especially at the parapet, I had a lot of slicing to do, and to connect the points per hand. The rest of the castle was made in the same way, for doors etc. I used booleans. 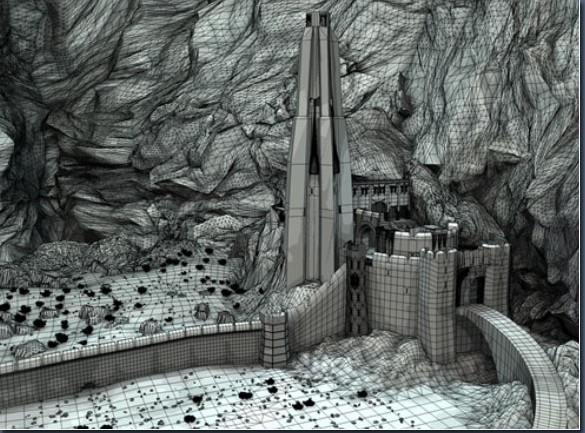 For the rocks, I also started with a box, extruded it in a "U" shape around the castle and started detailing the surface and use the function "crumple", which displaces the polygons, so in combination with sub-division, and a lot of manipulating with the magnet, you get a pretty good result.

Here a picture which shows the idea: 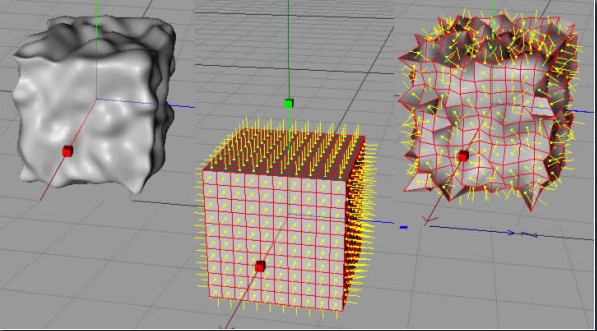 It is important that you know where to but the details, because at a certain amount of polygons, you can not control it anymore.
For the ground I used the same method, but I did the ground and the small rocks around the castle in one plane.
Concerning texturing, I dealed with a lot of different maps, most of them are from the 3dtotal texture-cds, especially for the dirt.
Starting with the castle, I used a groundtexture for the walls, therefore I made a larger version of the map in Photoshop so you need not, that much tiling.

This is a good opportunity to introduce some functions of Cinema 4D, because this program is not that common, but really an alternative and I guess in a few years it will be a competitor on the market.
Here a shortcut of the material-editor, which offers really everything you need. At the top the color, with the map, then "Diffusion" I used the plugin "DirtyNuts", to simulate dirt at edges, a bumpmap and some gloss-settings, and this map is finished.
But the material-editor also offers a lucent-channel which offers the possibility to create translucent surfaces, a transparency-channel, reflection,- refraction-channel, a fog-channel, alpha, - glow and displacement-channel and settings for the illumination.

Here an example for a dirtymap, the colormap was mixed in an BodyNut fusionshader, where you can combine 2 or more textures without using Photoshop, and even use alphamaps as masks. Like this I created some other maps, so that I have about 6 layers on the wall. The rest of the castle was made in a similar way. In the end I had about 30 different maps, to get a result I liked. 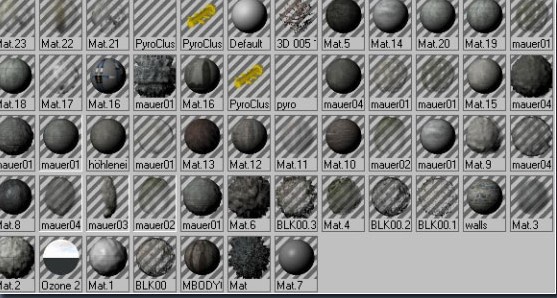 For the rocks I also used a lot of layers to get a good look, very important are here the displacementmaps, otherwise the stone looks like plastic.
For the ground I drew a large UVW-map in Photoshop, because it is a good way to get a smooth course from the sand to the stones near the castle.
The last steps were to add some lights. I just set 3 lights, 1 frontal to the castle - white. A blue one in the background with volumetriclight, and a slight yellow light right above the castle to bright up the shadow, and all together rendered with Radiosity, which took about 2 hours at 1000x800, looks like that:

I did not do much postwork, just a bit more contrast, added in photoshop.

So that's it, I guess compared to the old version, I really could improve that image with the textures 3Dtotal-texures!

Special thanks to them, and ciao 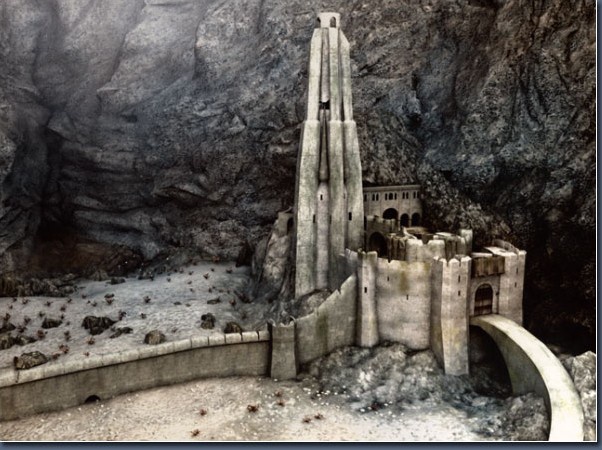