Making Of 'Hellboy' by Rodrigo Sória 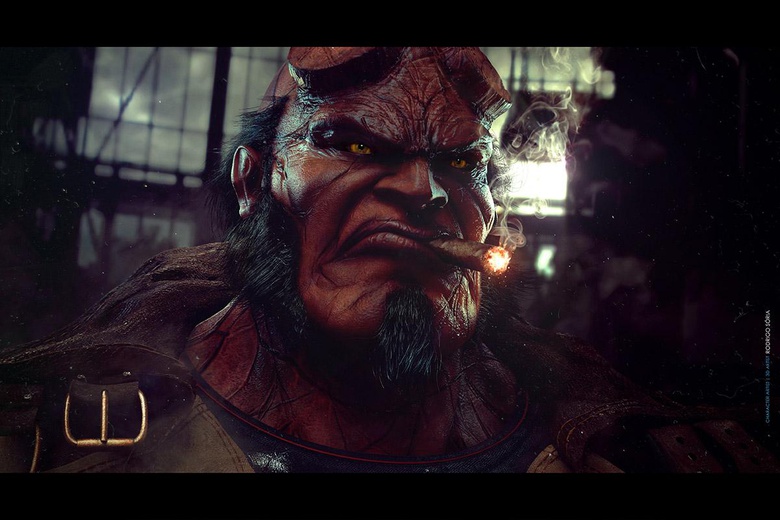 I wanted to produce Hellboy simply because I'm a fan of the character, and although my idea is pretty simple, I wanted to convey a strong and powerful expression in it, with strong, striking features.

I am passionate about images that have a distinct lighting effect and that set striking silhouettes of the characters. For me, the key point in an image is to get the scene to convey some sense or feeling in order to characterize the scene. These are often well-detailed pieces that have good texture and lighting.

I made this image in my free time, and in total it took around ten working days to produce. Here's my process...

To develop Hellboy, I first made a simple base head in SoftImage just so I could get a notion of the basic volume and proportion. I then took it into ZBrush to project the silhouette of my base on the model of Hellboy.

The head model used as a base

I then sought references from games, movies, and illustrations of the Hellboy character so I could begin to better define my base and sculpt it as closely to the real model as possible. After that I began to imagine how it would appear my final scene. In my head, I didn't want to develop a full-body image of the character, but just part of it, so I opted to sculpt only the chest and head. 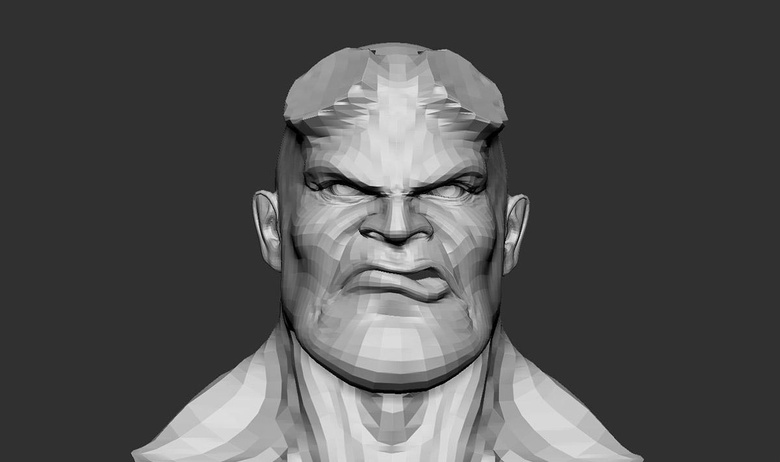 The first stage of sculpting a likeness

Then I exported the character's head into Softimage again and with the correct proportions and volumes in place, I started developing Hellboy's clothing. I created the opening UVs piece by piece, and gave each piece of clothing (the buckle, accessories, shirt and coat) a separate UV, so that the texture on each part of the model would be more realistic. 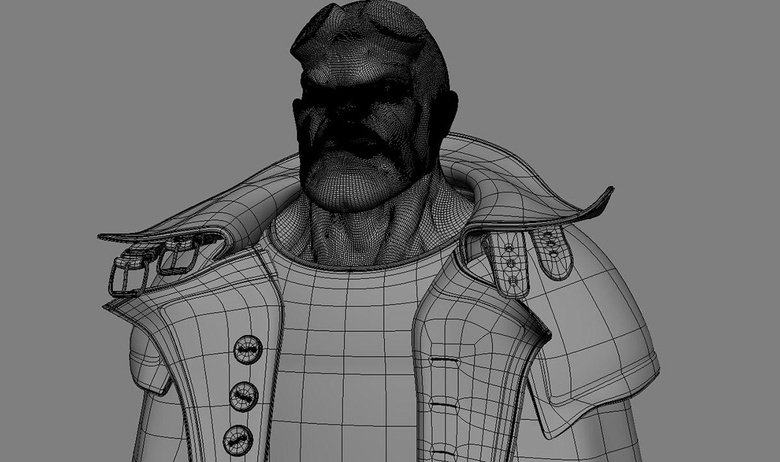 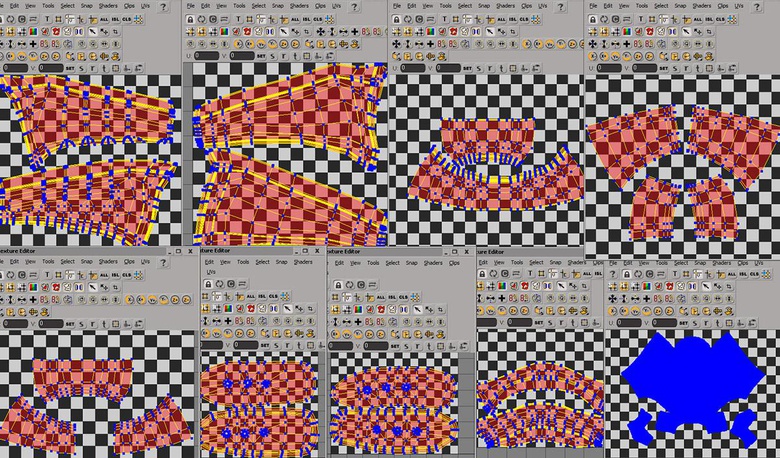 The UVs for each separate area of the clothing

I then moved each individual part into ZBrush and set about adding details such as veins, wrinkles, and pores. 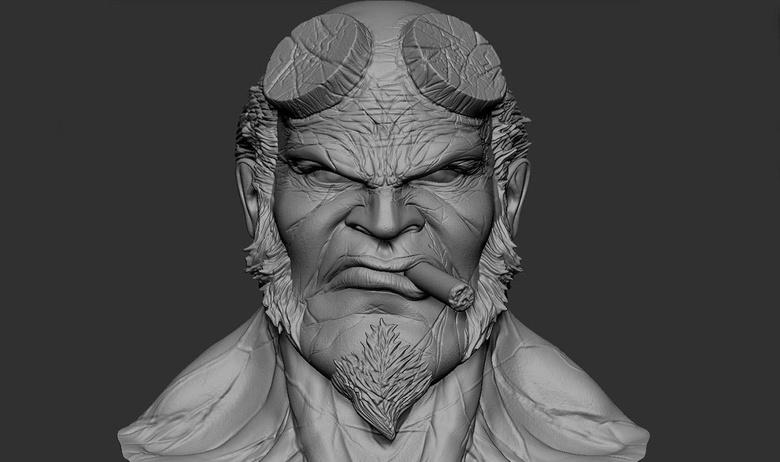 After finishing the head, I exported the Normal, Occlusion, Cavity, Displacement and base color maps into ZBrush. I did this with all the other parts of the model and the extra elements I'd added to the environment, and then began detailing each item in preparation for exporting again to refine the texture in Photoshop. 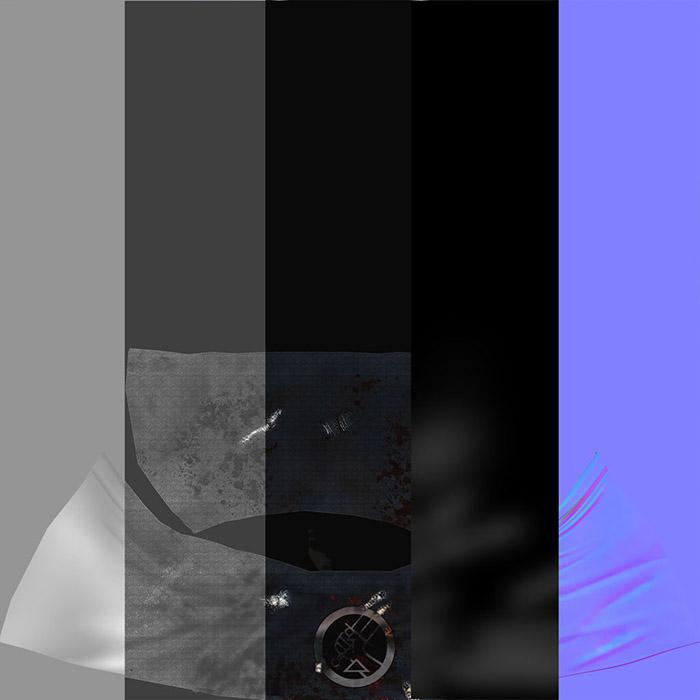 Some of the maps made for clothing

With all maps and models with UVs open, I began texturing each area of the model. I took pictures of each type of texture – leather, cloth, dust – and started to mix and layer them to create dirt, cuts, and scratches. This gave a realistic feel to the model.

Once I was happy with everything textured in Photoshop, I started to think about composing the final scene. 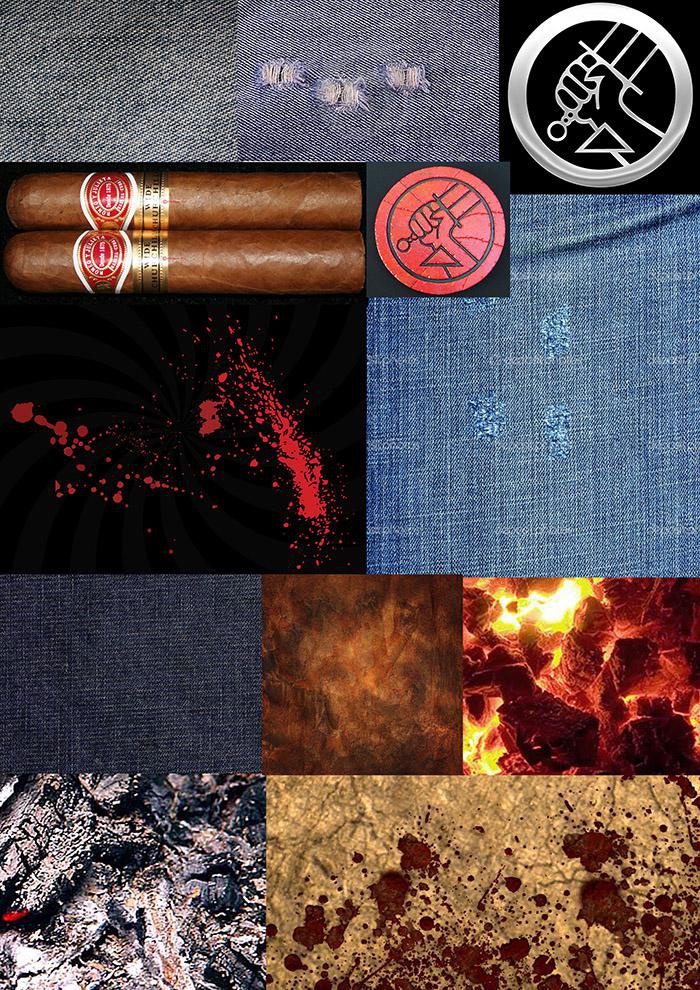 The materials referred to in creating a realistic texture

I then began lighting the model without the materials added. I used 4 lights to light the scene. 3 were positioned on the back of the model with different intensities and different warm and cool tones to create a mixed atmosphere in the scene. I used a light directly in front of the model too, with a low intensity. 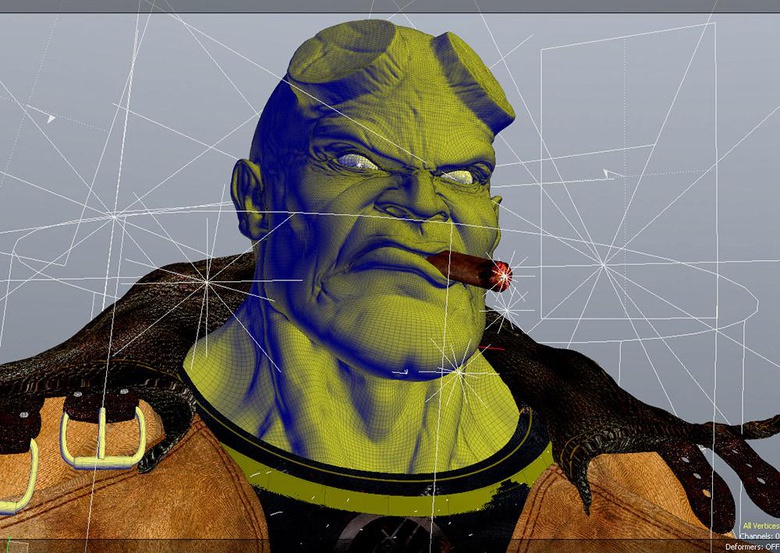 I then made all the adjustments and started to configure the SSS materials such as metal and fabric. This was a little complicated because I did not want him to absorb every detail of the maps that I had exported.

For the face, I utilized the Normal and Displacement together, which is not widely used by artists, but I wanted to highlight the details in Hellboy's face. I set up the SSS to stay very soft, so it didn't absorb both maps and still preserved the details I wanted.

Then I started refining the skin texture by generating maps of the Epidermis, Lower Dermis, Upper Dermis, Oil, Bump, Reflection and Specular maps. With all the maps made and applied in the model, all I needed to do was refine the materials and tweak the appearance to texture the face. 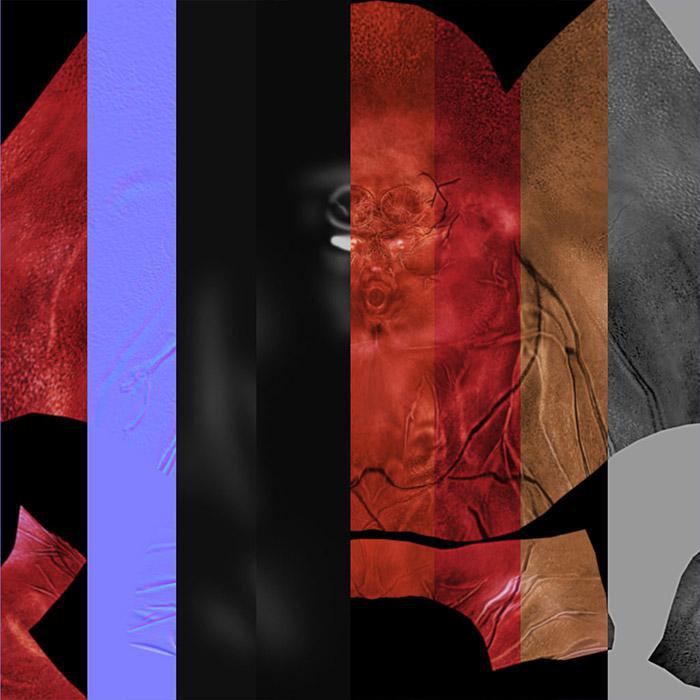 Maps for the skin texture

The remaining materials and textures were much easier to apply – especially the refined maps, buckles and clothing.

Once I had finished the other items, I applied the model textures in each of the areas on my model. With all the textures in order and the materials already set, I went to work adjusting the lighting so that the materials and textures responded the way I wanted them to.

Once everything was placed according to my direction, I positioned my camera in the final model to generate render passes. 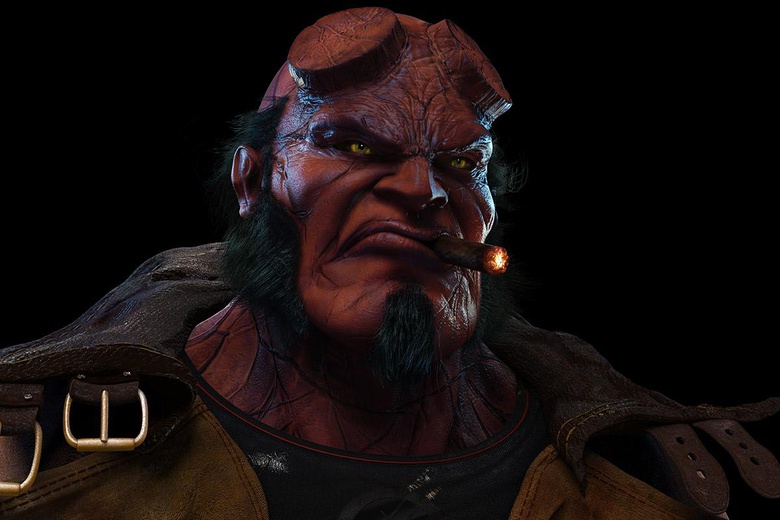 The first render base for Hellboy

I then returned to my model to finalize the hair. I first made projection planes in places where the hair would be, and then, with everything in place, I began the time-consuming and complicated process of hair creation.

I wanted something as real and organic as possible, and in the end it took roughly 3 days of work on the hair and beards. The hair was generated only on the model's head and I did about 20 tests until I got one that I liked. 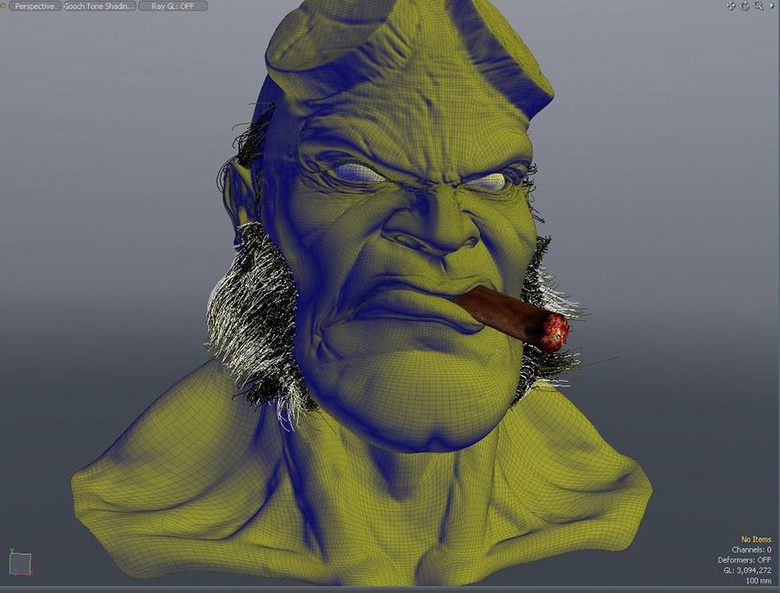 The final hair design for Hellboy

I then began to set up the render passes to make the composition of the final image. Altogether there were 8 render passes, namely: Surface ID, alpha, depth, specular shading, subsurface shading, illumination, Ambient Occlusion, and HDR.

Once I had rendered all the passes, I took them into Photoshop to refine the contrast, brightness, shadows and textures. 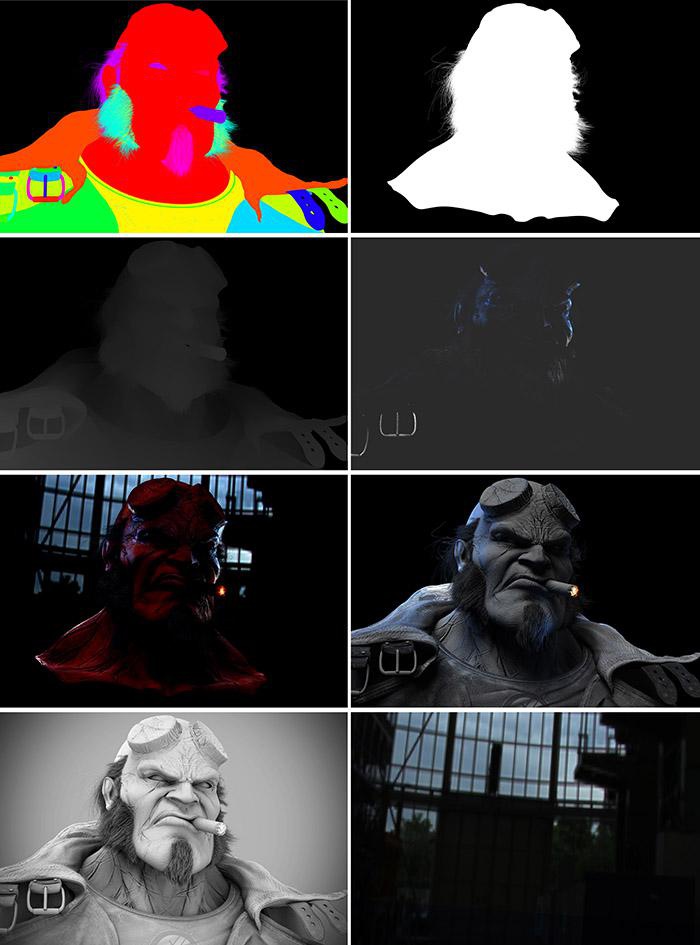 Various render passes used in the creation of Hellboy

In Photoshop, I applied the fumes around Hellboy and his cigar, and fixed some texture flaws that were bothering me. I tried to leave the contrast more aggressive to give a feeling of power to the whole scene.

After I made all the desired changes, I took the scene final render into After Effects to do some simple color correction and lighting. 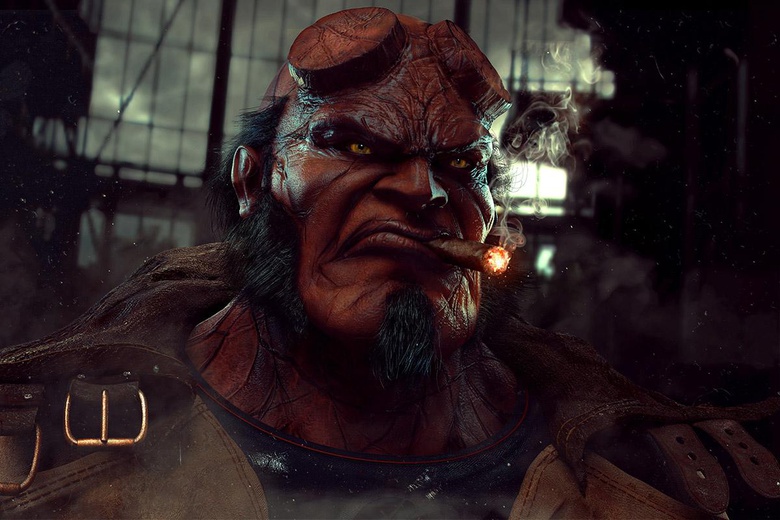 Adding smoke and atmospheric effects to the scene

I pushed the brightness and contrast a little and put a subtle, darker-bluish and greenish tint in the scene, with a little magenta and yellow. I then made the warm and cool tones more uniform in order to bring an air of mystery to the scene.

Once I applied all these details, I added a simple light effect in After Effects in 2 areas: The first was on the left side of the image near the ear to simulate some volumetric light, and the second point was above the cigar which intensified the light.

I then applied a light blur effect to the lights so that they would not be too harsh and destroy the climate in the scene. After adding those final details, I closed the file and rendered a frame in After Effects with those changes. I then took it back to Photoshop and applied the final dust details.

This concludes the image of Hellboy. For me, this was a job with many challenges, where I could learn how to draw hair and refine my skills in rendering, texture and lighting.

The final image of Hellboy