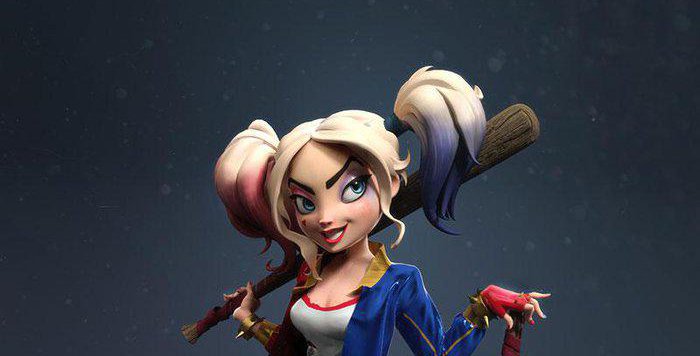 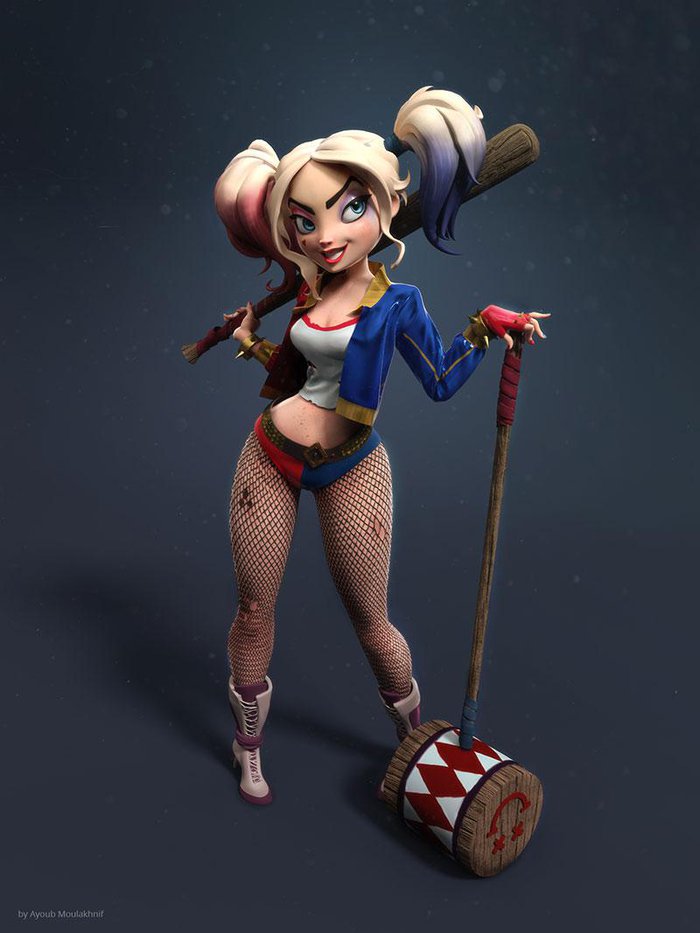 Ayoub Moulakhnif created his Harley Quinn character from a Nicola Saviori concept, using Blender and Marvelous Designer - check out his making of...

Nicola Saviori's Harley Quinn concept art really inspired me to create a new 3D artwork, with the idea of making my own 3D interpretation to add a value to the concept. The first and essential part is to study the concept and plan how you will translate the 2D shapes into 3D, and prepare for the problematic parts before you start the sculpting process.

A great way to achieve the style you are aiming for is to create an inspiration board containing few dozen of the work that you think is closer to what you have in mind. Also researching and analyzing real life is the best way to get inspiration to establish unique and original work. 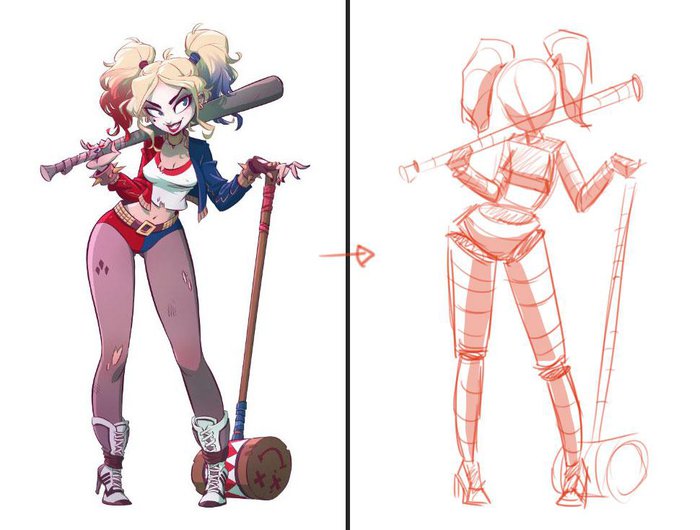 In Blender, first I create a rough blocking in an 'A' pose which is better at preserving the shoulders for later posing. I'll first start by creating a basemesh by either starting from a cube or using Blender's skin modifier. At this stage, the main goal is to decide the proportions that will work, and more importantly to make sure that the big shapes are working from all the views, this should set you to have clean base for later detailing.

The more solid the main shapes, the less time you will spend fixing some issues in the future. After that I'll use Blender dyntopo, generally I'll use Grab, Snake hook, and Blob in the blocking stage, then Crease, Clay strips and Scrape/Pea for detailing.

Try to think about the shapes and rhythm of your design, a great tool implements the "Smaller to the greater" philosophy presented by Disney in the ZBrush Summit. In my case, the dynamic twists from sharp to round, the contrast between sharp and soft, was applied to the smaller elements such as the hair, hands, cloths, and those twists are also translated into the pose.

Starting from a basemesh to add details

Once my character design is almost final, I will start my retopo process using the basic Blender snapping tools to recreate the geometry with better retopology flow. The model wasn't intended for animation so I didn't worry too much. At this stage I will start creating the accessories and tools to prepare for the posing. The fishnet was an interesting part; it is basically an 'X' shape with a stack of multiple modifiers, the following image shows how it was done.

At this point, I created a basic FK rig and started the posing process, I will also go to sculpt some parts for enhancements or fixes. I found it useful to use shapekeys to preserve the original mesh. 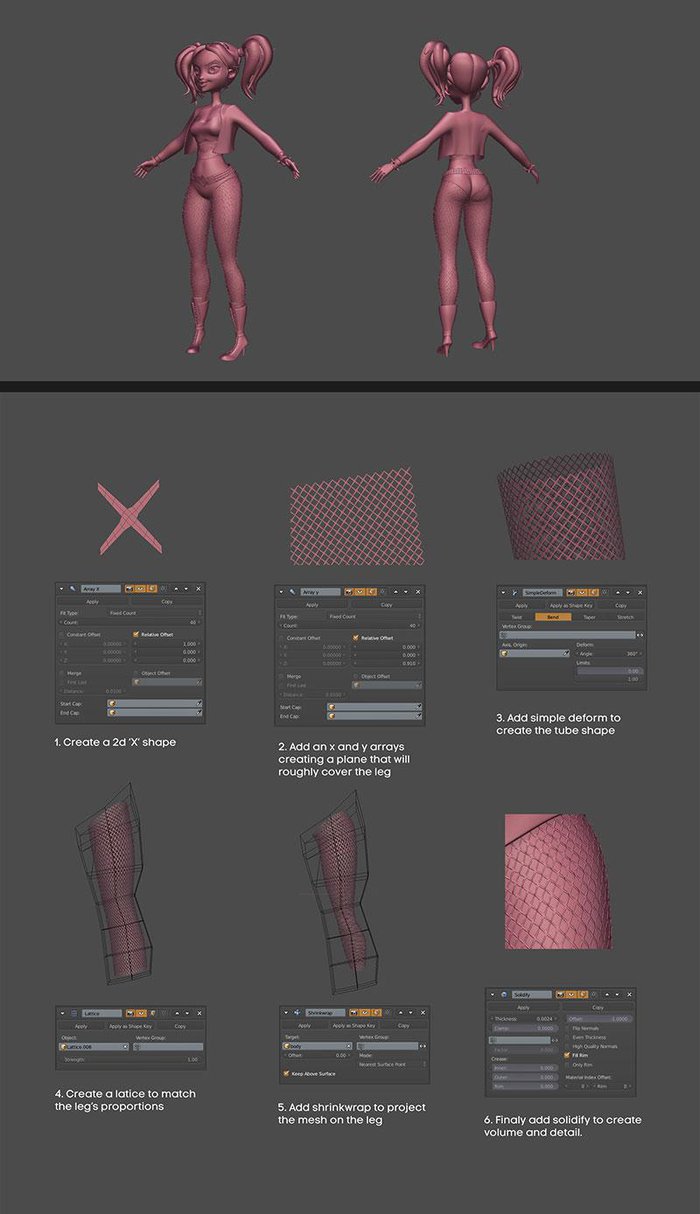 Before simulating the cloth I will make sure the pose is final and the camera is set up properly. I'll animate the model from default to the final pose, then I would export an OBJ file with animation data to be used in Marvelous Designer.

In Marvelous Designer the general process basically consists making the patterns for the T-shirt and the jacket, then simulating and adjusting the options until I get a result that I'm happy with. 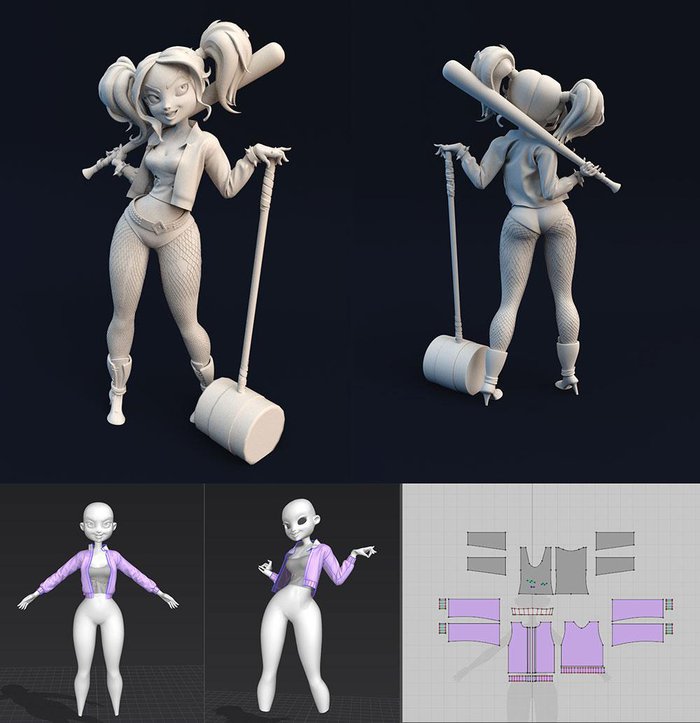 For the lighting I used a sun lamp as key light, another one for a subtle rim light, an HDR image for reflections and ambient/soft lights, and to enhance the rim light I implemented it in the shader as well. The goal is to make sure the model stands out from the background, with soft transition from light to shadow, and a nice rim light.

For unwrapping, the general idea is to favor seams in places that won't be seen. I used the checker texture to make sure there isn't too much stretching.

The shading was simple; I used Blender's texture paint to create my color map, generated a spec and dirt map. For me the important part was the face so I spent more time painting the makeup adding color variation in the skin. I usually try to make the lightest areas look warmer by adding yellows or oranges, and for darker areas I used purples or blues. For the eye I reused one that I already had, the creation process for the eye can be seen here. And lastly for the accessories shading, I used cycles material vault. 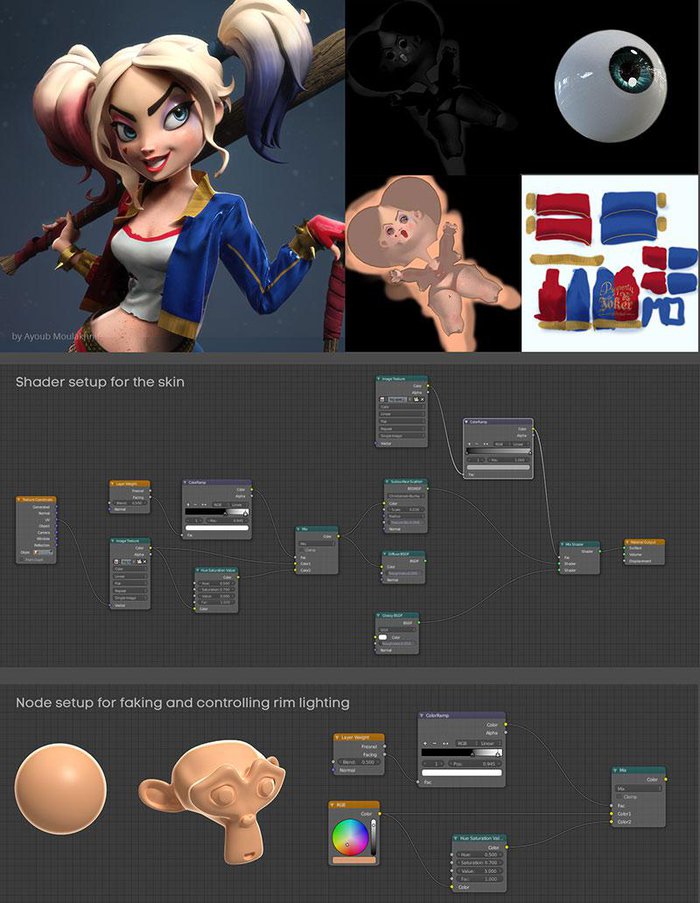 Before I render the model, I'll first check that everything is working, ask for feedback if possible, and maybe sometimes do some minor sculpting to push the model even more. I will start by rendering small sizes with relatively few samples to see if there are any issues. The reason is you don't want to wait for hours to see that you forgot a texture in a small place.

Before I move to Photoshop, I'll make sure to include 2 other render versions with high and low exposers which can be tweaked in the color management section. I also used filmic to insure high dynamic range. This is a simple trick I picked up through the years and it helps me to push the lighting while preserving the details in the shadows, which I based on the tone mapping technique in photography.

In Photoshop I add the different exposer renders to enhance the lighting. I also add a few dust textures, subtle filters such as the Sprayed and Angled strokes, and subtle color correction to make sure the overall artwork color is consistent. 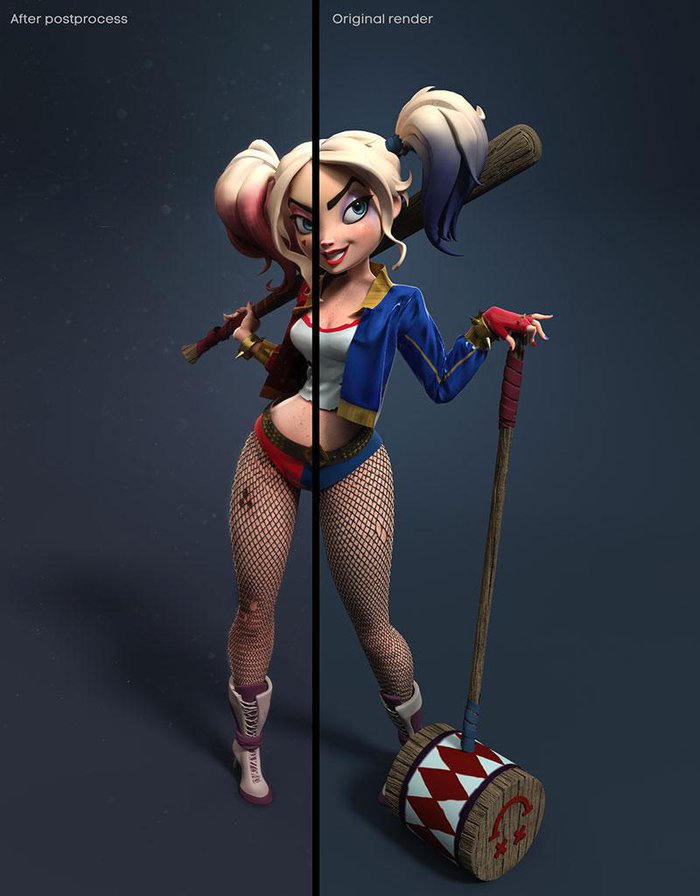 Raw render and after post-process