This is my first Making Of and I'm going to try to briefly explain the process of creating my image Classic Living Room. The image was a personal challenge through which I wanted to learn everything relating to interiors. I used 3ds Max for the main development of the image and VRay as the renderer. I also used Adobe Photoshop for creating the textures and adding the final touches at the end.

With any image, it's always good to start with references because this becomes your source of inspiration and allows for good development. So I started by looking for images of interiors until I found one that I liked. I like to have freedom when creating a new image and I started my challenge calmly but slowly, trying my best to be consistent. If you put in a few hours every day then you can achieve great results (Fig.01).

Most of the modeling in the scene was done by converting boxes into editable polys, using splines with lathe modifiers and making the splines renderable with thickness.

I started by modeling the room into which I was going to place all the objects. Once the perspective was clear and I'd used the reference image to help position the windows, I began to shape the objects, creating them from simple geometries.

Each object was made in a different way. For example, the lamps were created with a spline and then I applied the lathe modifier to the base and extruded, beveling the splines (Fig.02). 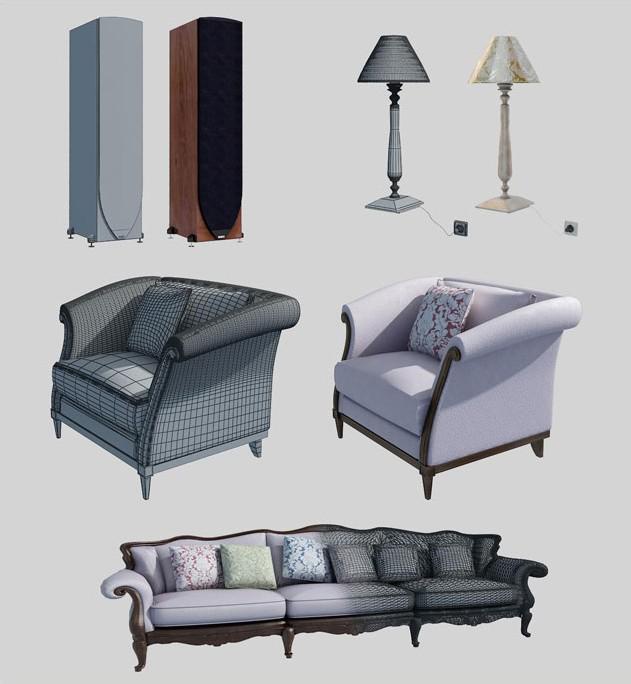 For the frames and mirrors, I created rectangular extruded splines and then converted them to Editable Poly, selecting the primary face and making an inset that determined the size of the frame. Finally I selected the side of the center of the frame and extruded inwards.

For the speakers, I created a base box and part of the fabric of the speaker using a simple spline that I extruded. I then made the feet from basic shapes like cylinders with a chamfer added after converting them to Editable Poly.

The tables were also made by converting to Editable Poly and moving some vertices here and there.

The fireplace was created with boxes, cylinders and a plane for a glass. As usual, I converted it to Editable Poly and used a compound object pro Boolean to make a hole in the visor and some chamfer to round everything off before applying the MeshSmooth modifier.

For the curtains, a plane with many divisions was used. I applied the wave modifier to only affect the selected vertices, then applied the MeshSmooth modifier and eventually converted to Editable Poly to finish the detailing. I moved some vertices manually and used the Box FFD modifier to deform and vary the look of one curtain from another.

For the carpet I used the V-Ray Fur option as this is an easy way to create all types and forms of skins. I used these parameters:

With most of the modeling finally completed, everything was converted to Editable Poly as this allows for greater control. I created almost all of the models, except for a few I used from a library (Fig.03). 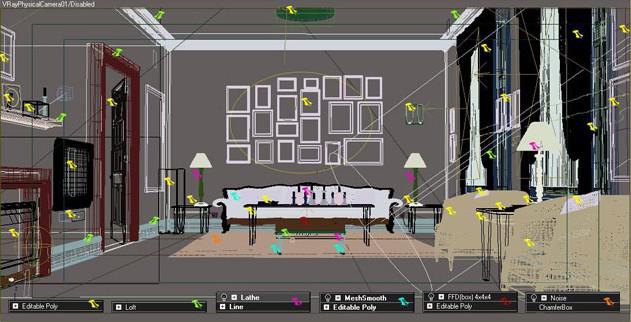 I found it somewhat difficult to hit on all the right textures at first because I wanted the room to look stylish and so everything had to be perfect. I learned how to properly use the UVW mapping modifiers, the famous and tedious Unwrap UVW and Vray2SidedMtl for the curtains.

For most of the objects, it only took correctly putting in the UVW mapping coordinates. With Unwrap UVW I unwrapped about 30 objects, including paintings, mirrors and a photo frame, using the fantastic Unfold mapping option.

Then I added a checker material and regulated the UVW mapping coordinates. And once textured in Photoshop, I applied the final texture.

I used V-Ray materials for all the objects, using diffuse, bump and some specular layers for items like the parquet floor.

For texturing I used the 3DTotal Textures collection (Fig.04 - 09). 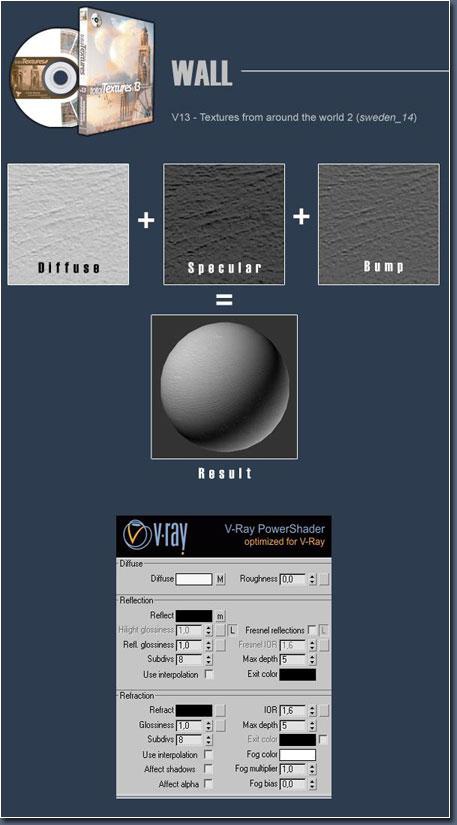 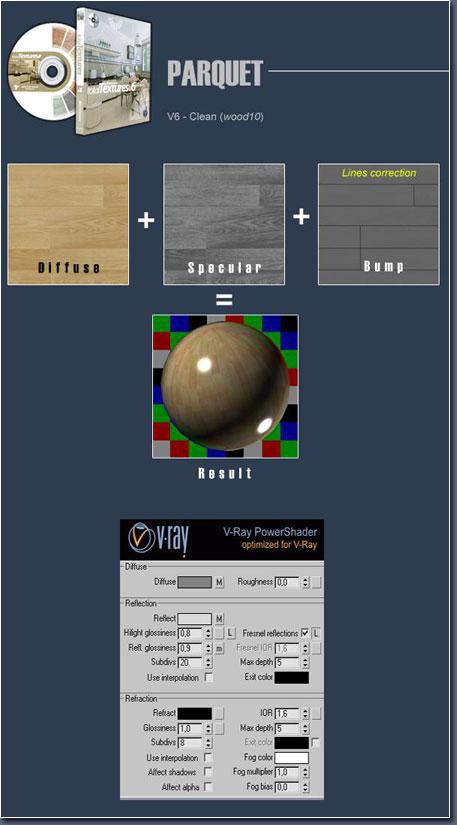 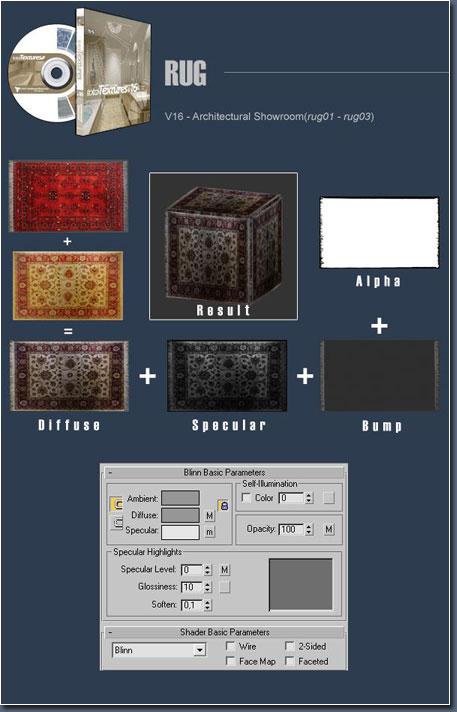 Some of the materials used were created based on the parameters of various materials that I saw on this website: http://www.vray-materials.de  and I recommend this as a good resource.

As everyone knows, lighting is an important phase. Here enters the play of shadows, the intensity of colors and reflections... so before setting up my lights, I did several tests. The final settings were as follows (Fig.10):

I used the following parameters (Fig.11). 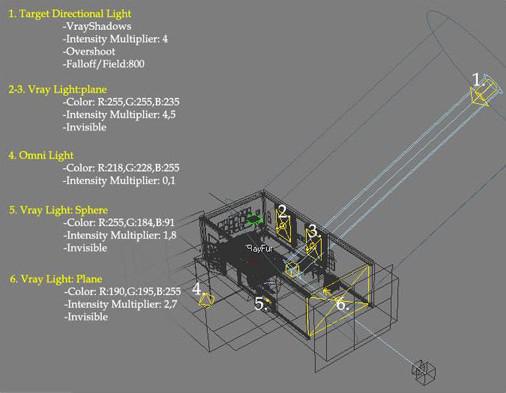 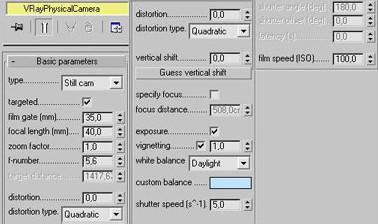 Then I used two render passes: normal rendering and Ambient Occlusion pass (AO). The parameters for then normal render were as follows (Fig.12) 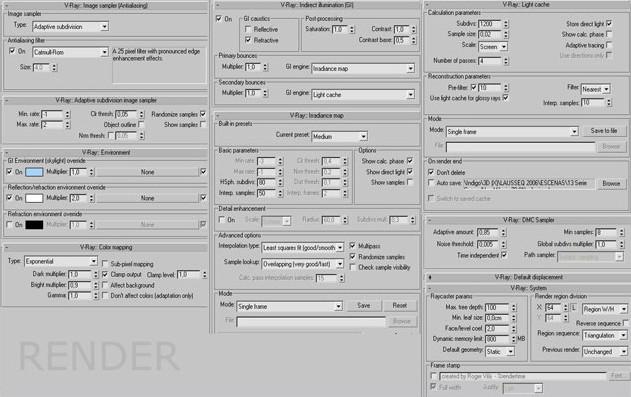 To perform the AO pass, I created a new material (Fig.13). 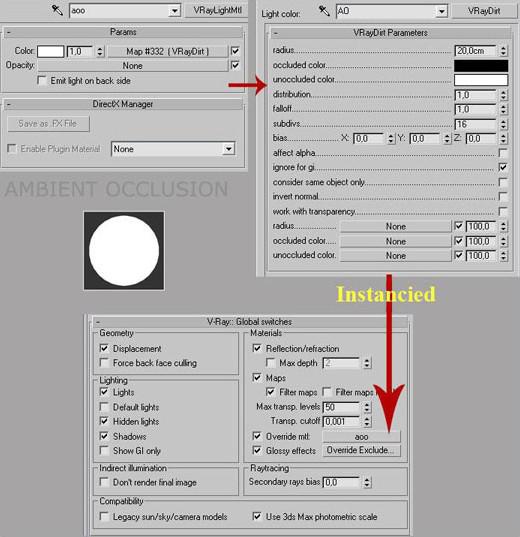 I turned off all the lights in the scene, the Indirect illumination (GI) and the environment. For color mapping I chose the type Linear Multiply, with Gamma set to 2.2 and in Environment the ambient color was white.

It's important to remember that if you've used a physical camera then you will need to turn off the exposure and vignetting before you render.

I did three AO passes, one for the full scene, one for the candles and the last one for the picture frames. In post-production it was then easy to go into Photoshop and select and separate the layers.

I did the glow effect on the fire and the windows, then added the Ambient Occlusion pass (AO) and adjust the opacity up to 35%. Next I customized the opacity of the objects by separating the layers. And finally I created the image chromatic aberration and vignetting.

Here are the renders performed prior to the post-production process (Fig.14 - 17).

It only remains to thank everyone who has helped with me this image, especially my friend Alejandro Ruano (DraKeXXI), who helped me during the creation process. I hope you've enjoyed this Making Of and you can any queries to my email (rogervilac@hotmail.com) or visit my webpage http://rogervilac.wordpress.com