Hi everyone! Today I'll be sharing with you some of the development process of my robot design Centurion, Alien Tech.

I've been wanting to do some robot designs for some time, to further develop my hard surface modeling skills, and one day I actually dreamt about it. When I woke up, I immediately put down on paper what I remembered of this alien robot creature I'd dreamed about (or basically an armored alien). I knew I wanted it to have eight eyes, a very sideways, long head (like the hammerhead shark from Pirates of the Caribbean 2) and no nose or almost any facial depth, as this creature doesn't need oxygen. I also wanted it to have black, very reflective eyes, and mainly black armor. Basically a creature that would look completely alien, save some exceptions in its anatomy.

I quickly sculpted the basic shape inside ZBrush, using a simple sphere as the base mesh, and started tweaking the form little by little using the Move and Clay brushes, and also giving it some form with one of my personal favorites, the ClayTube brush. At this stage I just wanted to get the basic shape without worrying at all about topology or the cleanliness of my mesh. Everything would be fair game, as I would retopologize everything very cleanly afterwards in another 3D package, in my case, 3ds Max.

As you can see in Fig.01, everything started from a single sphere. At that time there wasn't the DynaMesh function inside ZBrush yet, which is a feature that I find quite awesome and look forward to using a lot in my future projects. 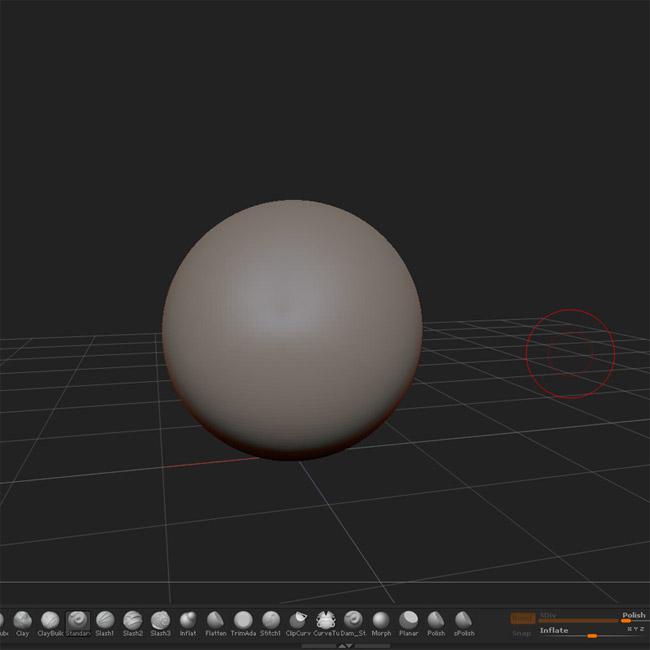 I didn't bother to carve in any details; I just wanted to get the shape and the basic silhouette right. Once I was happy with the form I imported this quite heavy mesh to 3ds Max and started laying the base topology and also where some pieces would be separate from one another. I also tried to think a bit about what color each individual component was going to be as I didn't want to have a messy color scheme or a monotonous creature design (Fig.02). 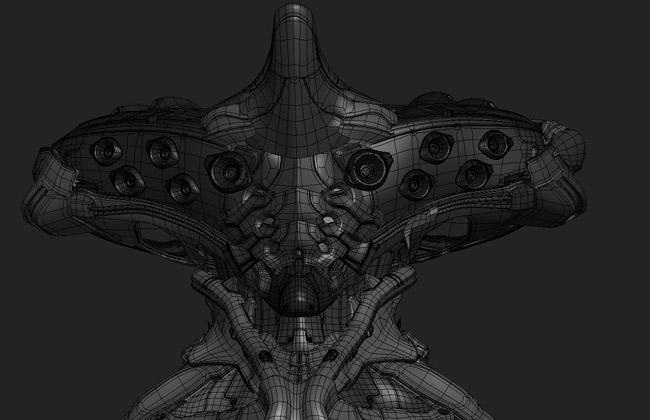 An interesting fact is that it was only after I had the mesh taken this far that I actually started to look for references (the dream was pretty good I'd say). So I started collecting references from every single scrap of hard surface design I could get (I even imported books!). I remember getting a huge amount of material from the Transformers movie as well, although this was for a different purpose as I wanted to make sure my alien robot didn't look like them. So here was a case of collecting references to actually try to get away from what has been done before! I did also gather references that I wanted to get inspiration from, such as Evangelion, for instance.

I started realizing that I would have to make some compromises regarding my original ideas. The head didn't have enough interesting shapes as it was too flat. Fig.03 shows some further design elements using ZBrush to carve detail that I'd then model properly in 3ds Max. ZBrush and Photoshop are powerful designing tools and you can quickly carve in or add volume and details such holes and crevices. 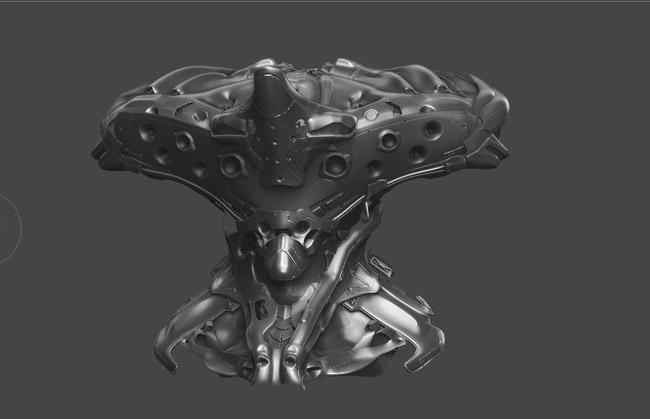 At the beginning I also had this unicorn horn on his head, which was an element that I thought would make him stand out against other robot designs out there, but after showing it to a colleague it was apparent that this horn was also causing some issues in terms of design and I decided to drop it.


I used Photoshop to help develop the design (Fig.04). It's great because you can paint smaller details on top, or use the Warp or Liquify tools to quickly change shapes. Photoshop is also great when you want to change and fine tune colors of the different elements. The result may look ugly, but I just wanted to quickly sketch out some ideas so that I could explore them with proper care later. In this version it kind of looked a bit more like a Samurai's helmet. 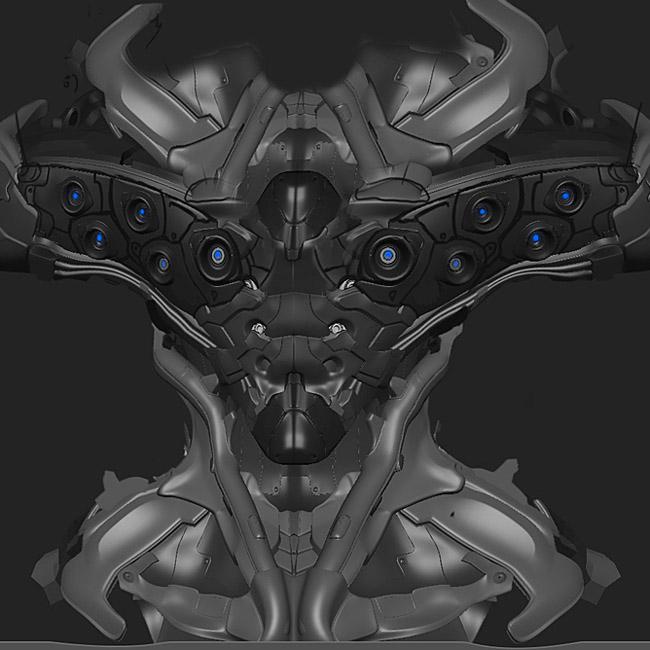 For some time, I kept switching between 3ds Max and Photoshop and ZBrush again to keep further designing the robot. It was a very iterative process and the design was really the thing that took the longest to do.

Fig.05 shows how I completely re-shaped the robot in Photoshop to something completely different. Maybe this could serve as the base for one of my future robot designs! 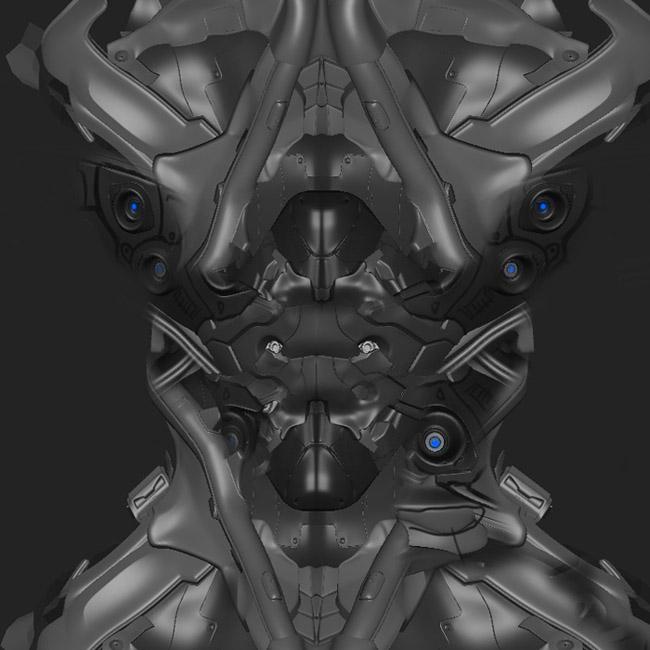 Even after the modeling was complete (with everything quite polished and very clean geometry and such), I kept designing the color scheme and also tweaked the proportions a bit further using ZBrush and the Move tool. The final mesh can be seen in Fig.06. 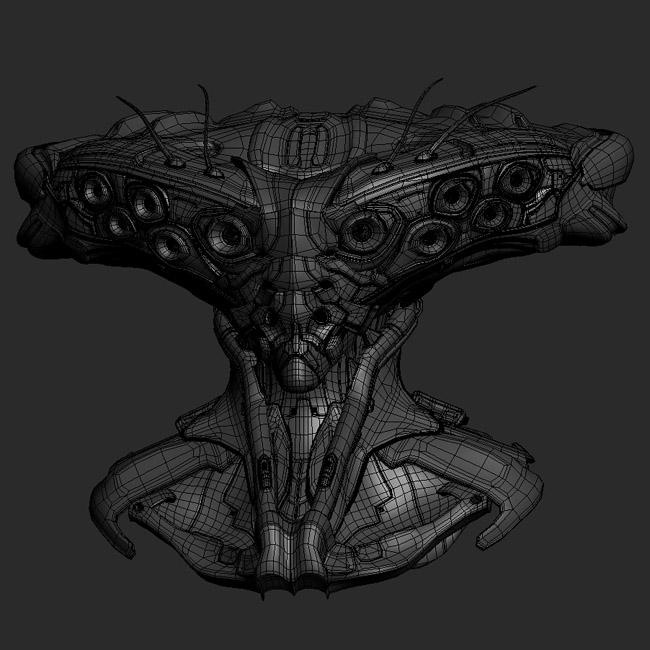 Regarding the last color study, I used keyboard shortcuts to do it, as it gave me a fairly quick way to get good renders and also test using different colors or different materials. Here are some color studies I did (Fig.07). 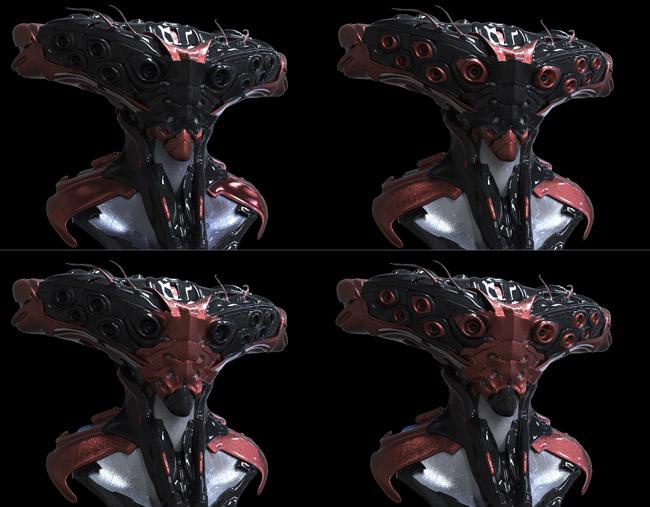 Even though I struggled to keep the idea of it having black eyes, it simply wasn't working as well as I'd liked, so I decided to drop this idea and the eyes a glow instead, which ended up being quite cool.

One other detail that I'd also been thinking about since the beginning was also dropped, which was that those wires near the jaw line would serve as veins through which energy or blood would flow around his head. So these would basically glow or have some sort of liquid material, but they were getting way too distracting in the image so I decided to drop the idea and just keep the eyes as the main focus point (Fig.08). 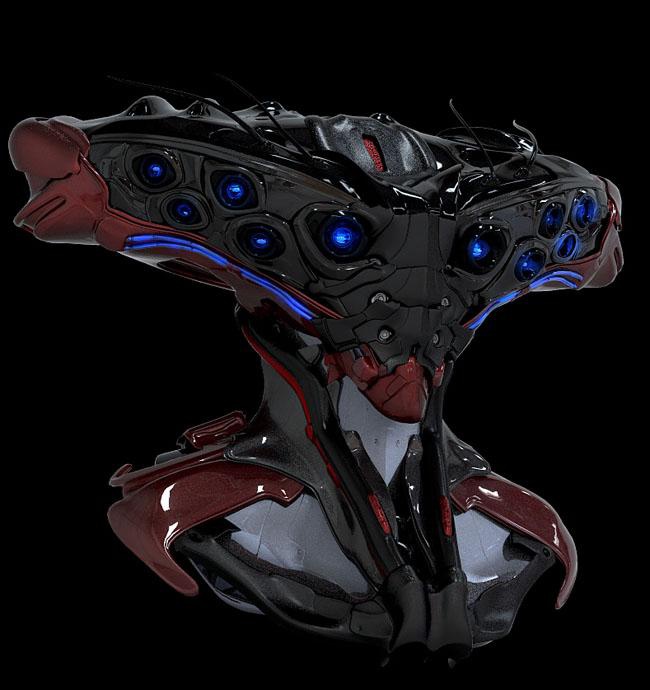 So everything was set up and then it was time to increase the resolution a lot and render the final image (Fig.09)!

Well I hope you guys have liked this little insight into how I created this image and that you might have learned something from it, or at least got some inspiration for your own projects. The reception this image has been getting is being very positive, but everyone is also demanding that I do the full body which I didn't had any plans to in the beginning. However, I am now doing the full body design and hopefully you will see it soon!