This picture was a research piece for a feature-length 3d movie, People of the Elephant.Â  This film tells the story mentioned in a holy book, taking place between the year 570 and 571, of our time.Â  It tells the story of a King in the south of Arabia who took 60,000 troops and 13 elephants, and set his army to destroy the holy city of Mecca.Â  All of this was in the purpose of re-routing the pilgrimage and commerce of the Arabs towards San'a, the capital of Yemen, where he built a magnificent Cathedral.Â  When the King gave the order to attack, a cloud of birds appeared in the sky.Â  The birds stoned the aggressors with thousands of little stones and thus defeated the troops of the Yemen King. (Production by Sigma Technologies, Morocco)

The purpose of the brief was to make a large view of the cathedral during the night-time, and the whole scene was to be bathed in moonlight.

At first, I chose a landscape format of 5906 by 2835 pixels as a basis for the matte painting.Â  I always work in a large format to have more detail, which is, at the same time, perfect for an impression on a proposal.Â  I made a quick sketch using several different brushes.Â  These brushes were either customised by me, made from tutorials, or were just already existing in Photoshop.Â  All the while I was using a graphics tablet, which is necessary for this kind of precise work (sketching and matte painting).

So, I started with the sky, concentrating especially on the clouds, with the brush opacity at 50% (Fig.01).Â  Afterwards, I painted the ground with a dark colour, followed by the moon and finally the cathedral, with a brush opacity of 50% to build up different layers of colour.Â  I then lit up the centre of the picture so that the eye of the spectator would be attracted to the moon and the cathedral (Fig.02).Â  To add volume and value, I put touches of light coloured paint on the cathedral and the clouds.Â  With small brush touches, I also painted in the houses, and I created a fog to add atmosphere to the whole scene.Â  And finally, to reinforce the composition, I drew a rock in the foreground of the scene, on one side, to achieve some depth and to make it more dynamic (Fig.03).Â  Based on the sketch, I then started the matte painting. 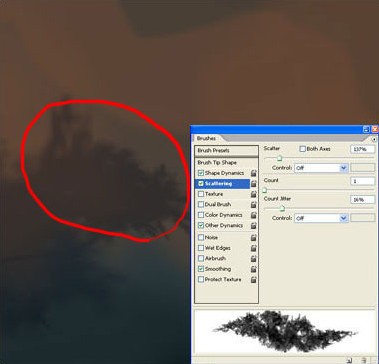 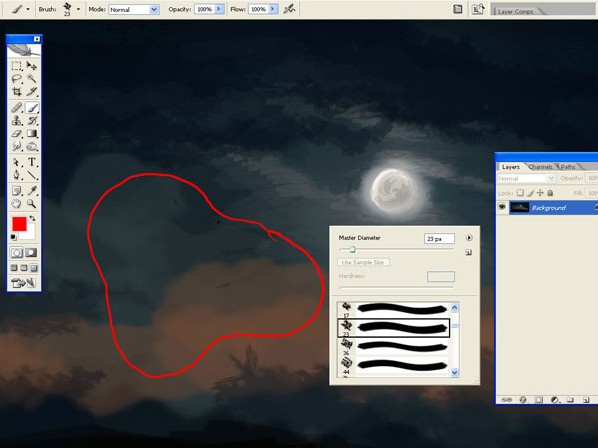 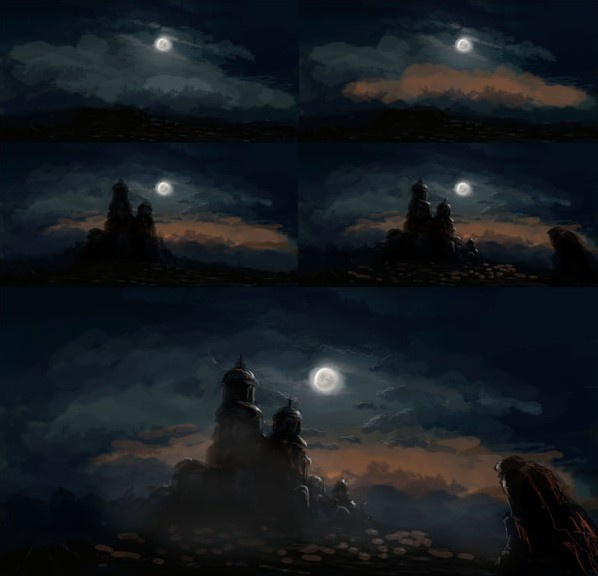 Before and during the work on this particular matte painting, I made some research and assembled some documents (either pictures gathered on the Internet or photographs taken by myself with my camera).Â  The image obviously had to be of a high quality and resolution (between 3000 to 4000 pixels) for a top quality result.

I started with a dark blue background (remember the scene is nocturnal).Â  After choosing three skies, I changed them into greyscale mode in order to have just one value.Â  I set the first sky in Overlay mode, then added a transparent orange gradation from the bottom to the top with an opacity of 59%.Â  I used orange to accentuate the presence of the sun and to warm up the background.Â  Afterwards, I added a second sky, in Overlay mode again, with 62% opacity.Â  Then came the third, and final, sky, again in Overlay mode.Â  Finally, I added a line portraying the horizon, in an off-white/grey (Fig.04).

Changing the opacity of the brushes, I painted the ground and the mountains.Â  I even integrated images of mountains and applied them as layers (Layer style; dark blue colour; Overlay mode; Opacity 59%) so that they became incorporated into the sky (Fig.05). 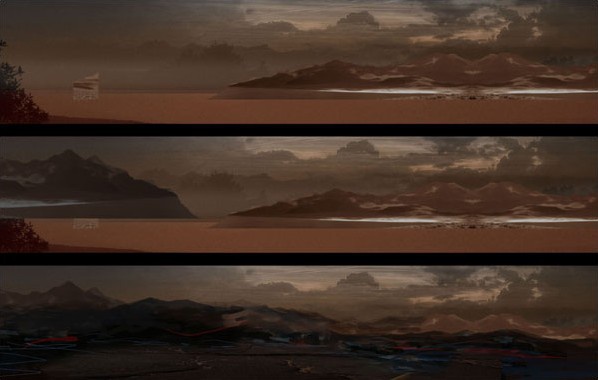 I duplicated the layer of the moon and applied a Gaussian blur, before making it bigger, to give the resemblance of a halo around the moon.Â  With the pipette tool, I took the colour of the moonlight and added strokes of paint on the clouds' edges.Â  Finally, I enlarged the two layers of the moon to enhance the appearance of the cathedral (Fig.06).

To extract the background architecture, I worked with the alpha channels (Fig.07).Â  Sometimes I use the brush tool, click on the 'Q' key and then paint the surface that I want.Â  Then I click on Q again to select the surface to have it switched.Â  In another window, with all images carefully selected, I came up with the composition.Â  To enlarge and decrease the sizes, I used the Transformation tool (Ctrl + T), changing them to grey to achieve more value (Fig.08). 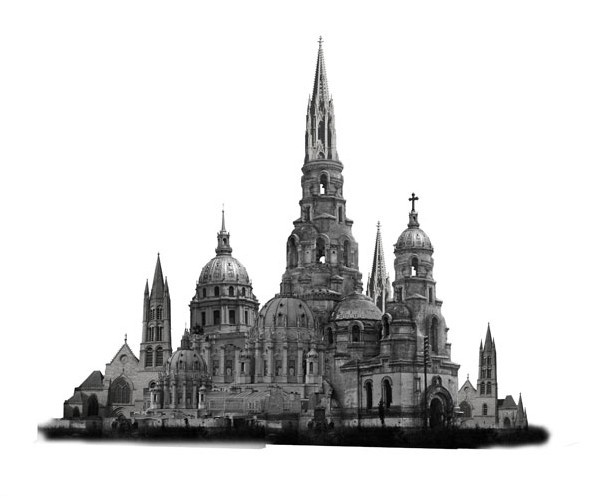 Afterwards, I integrated them into the original scene, adding then a little red colour with the Color Balance option to make it more harmonious with the atmosphere of the scene (Fig.09).Â  I duplicated the same layer and darkened it with the Hue/Saturation tool, while applying the Overlay mode.Â  On the same layer, I erased the luminous parts with the Airbrush Pen Opacity Flow.Â  I added a yellow light on the windows and finally made a light fog on the cathedral, to add more focal depth.

I used the image of a city, with an Opacity of 47%, and on the mask layer I erased the borders with an eraser.Â  After that, I applied a black Transparency gradient from the left to the right, in Overlay mode and at 64% Opacity. Finally, I added an orange colour to portray fires and smoke, to show that there are people living in the city (Fig.10). 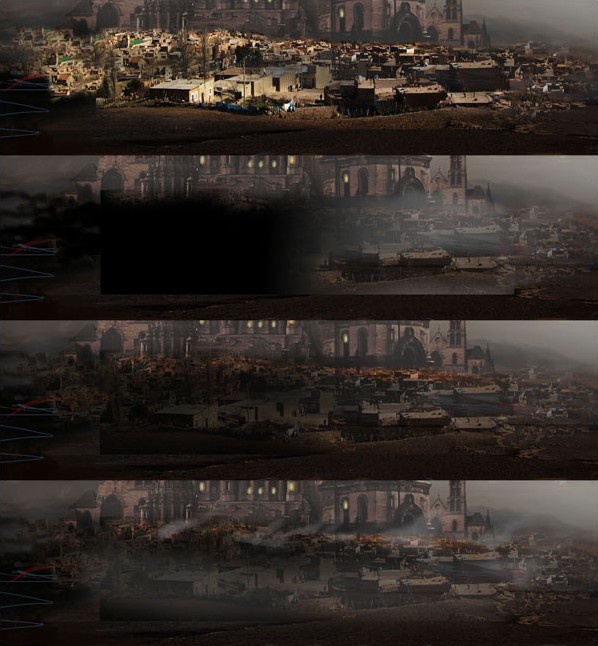 To separate the cathedral from the background I applied a Transparency gradient from bottom to top, with a light grey colour (Fig.11). 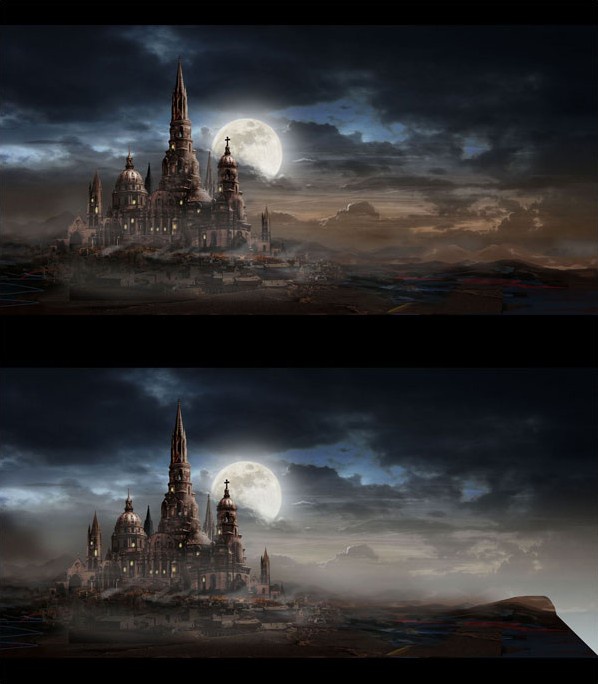 After I selected the images, I extracted the rock in the background with Alpha Channels (Fig.12) and then assembled the rocks.Â  With each one, I used the Curves tool to make them correctly contrasted.

Finally, I darkened the image and put the fog onto the rocks on the right of the image (Fig.13). 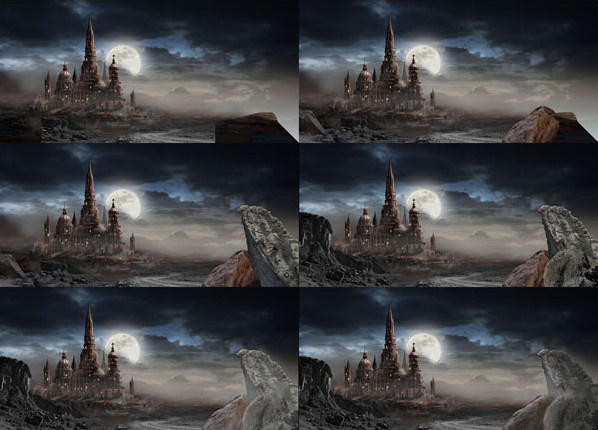 On a new layer, I applied a Transparency gradient in black from bottom to top with a 44% Opacity.Â  On another new layer, I made a Radial gradient with the Soft Light mode.Â  I then added a fusion layer (curve) to the whole scene and darkened the image a little.Â  Then, I added a Color Balance of Cyan -42 and Yellow +27 (Fig.14).

The matte painting is a work that demands great patience, time and dedication.Â  It allows us to create images that don't exist and which can be quite inspirational!Â  (Fig.15) 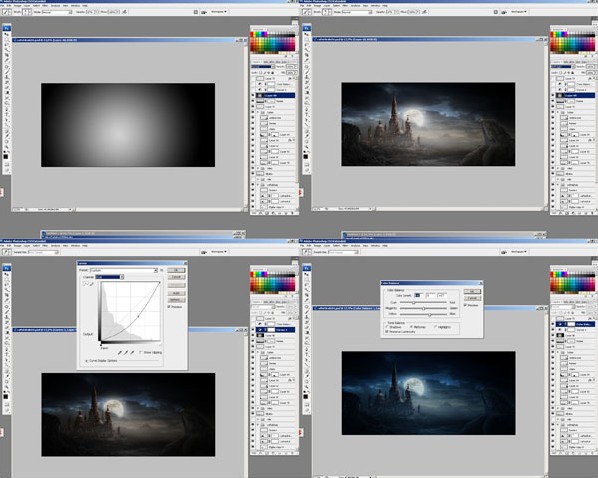