Hi, this tutorial shows how I created the textures for the Brave New World image. I will go over the shader breakdown as well. I kept the process very procedural since it helped me to quickly texture a huge amount of geometry, as well as generate variations. I also did a lot of matte painting on top to get the final look.

All of the textures used in this tutorial can be downloaded from here.

The image was based on a screenplay of the "vortex" concept. The theme was to show a futuristic city that has developed over time due to man's success and advancing technologies, yet is still ruled by social and economic classes which tends to pull down the growth and results in hints of dystopia lurking in the dark. The city needed to look uniform and well-planned at the same time, implying a greater machine/industrial understructure.

The geometry was divided into two primary sets - "distribution" and "specific":

• The distribution set consisted of many small buildings, each consisting of different structural details. The geo from this set was used to fill up most of the city distribution. Since the shot was from a long distance, I kept the geometry very simple.
• The specific set consisted of buildings that were hand-placed into the scene and whose occurrence was limited.

For the purpose of the tutorial, I will be taking a small subset from the distribution set and going over the process. The same logic was used and applied for the rest of the geometry in the scene. Here is the geo and the wireframe overlay (Fig.01 - 02). 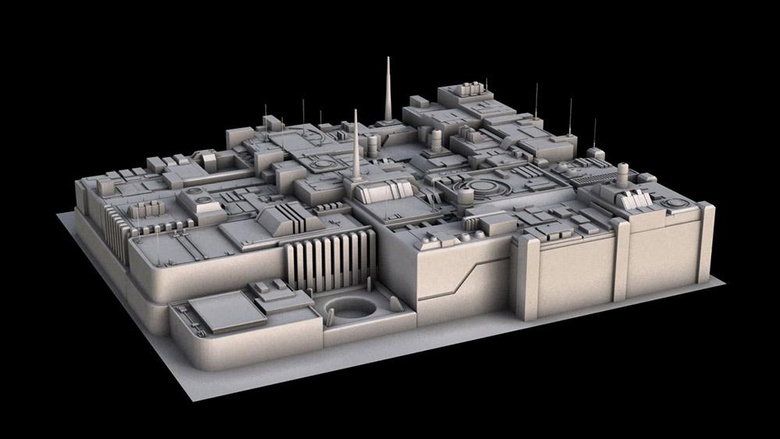 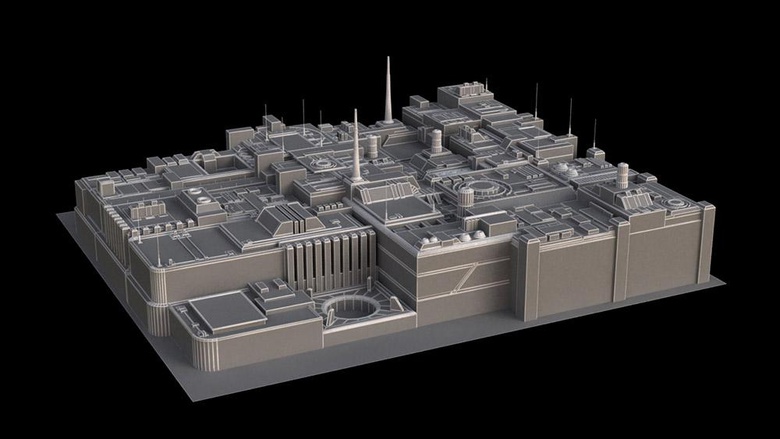 I will be going over the logical process for making the textures. I have tested these techniques in Autodesk Maya and 3ds Max. The same or slightly modified logic should work for other 3D packages as well.

It is important that the geometry has its UVs laid out. You can go about doing this automatically as well by hand. For this particular example I just went with automatic mapping.

I created five shading networks with different looks and materials to create the variation. The base logic for all of them was the same. For each, there was a clean material called "relative_clean" and a wear and tear material called "dirty". These two were mixed using the "dirt_mask":

• relative_clean: This shader is the main look of the image.
• dirty: This shader only shows up in places where there is dirt or wear and tear.
• dirt_mask: This contains the procedural dirt_mask.

The mask controls where the dirty material shows up. The above three were placed into a top level shader (Fig.03). 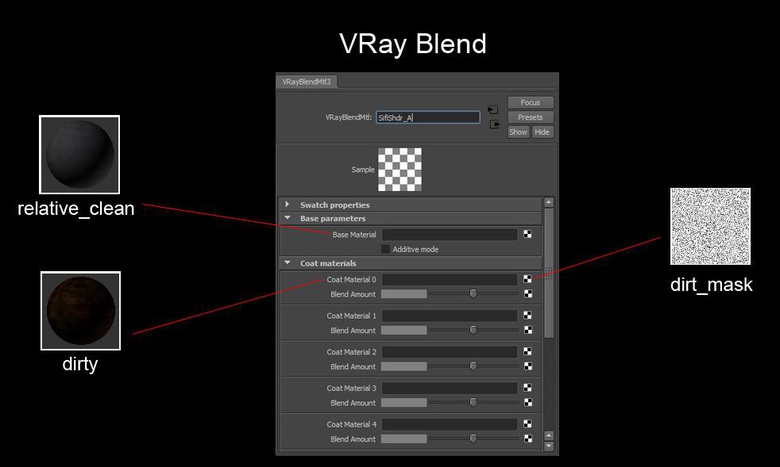 Place the relative_clean shader as the base material.
Link the dirty shader into a higher slot.
Plug in the procedural dirt_mask into the mask/alpha slot of the dirty shader.

Color 1 : Place the relative_clean node here
Color 2 : Place the dirty node here
Mask : Link the dirt_mask here
Plug the mix map into the diffuse slot of the V-Ray material.
Using the mix map you can create the entire network using one shader. Ideally, I prefer that the wear and tear dirty material has a few different properties/changes when compared to the relative_clean one.
You can use the V-Ray blend material in 3ds Max as well.

For the Brave New World image, I used the V-Ray blend material.

For Autodesk 3ds Max: Use a composite material plugged into the color slot of a Mix map or the diffuse of a V-Ray shader (Fig.05).

I created a dirt mask, which is used to switch between the relative_clean and dirty texture maps. This mask needs to be procedural in nature because when I start to distribute the various buildings, the mask automatically adjusts to show continuity.

The logic behind the mask is to mix various procedural noise patterns within a clamped real-time ambient occlusion. You can use any noise patterns that you like so long as it does not look too uniform. I do recommend mixing various noise types to get the final look. You can see the dirt mask applied to the geo set in Fig.06. 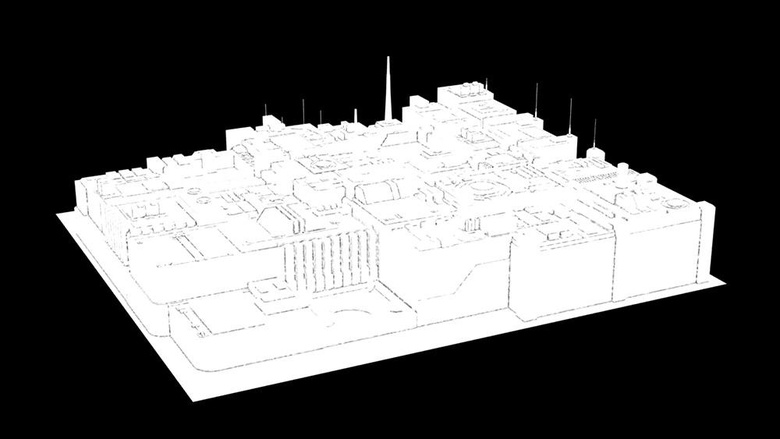 To show the automatic adjustment of the dirt mask, I took a small geo "B04" and applied the mask to it (Fig.07). You can see the variation in the noise pattern. 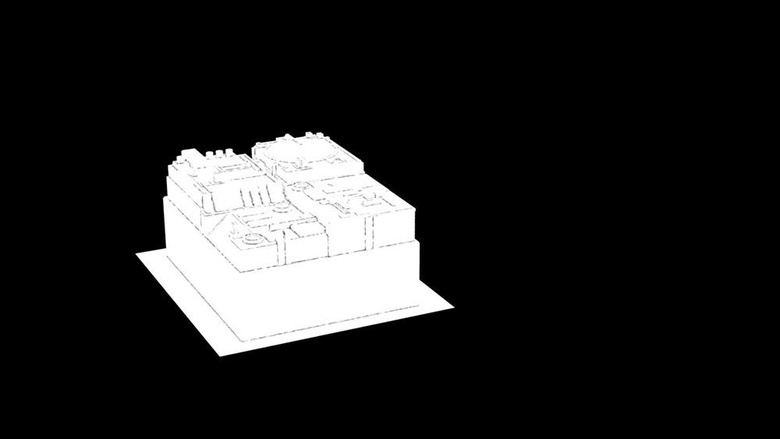 I duplicated B04 (Instance) and rotated it 90 degrees. You can see that the Dirt mask automatically creates a rim of pattern where the two geometry blocks meet (Fig.08). 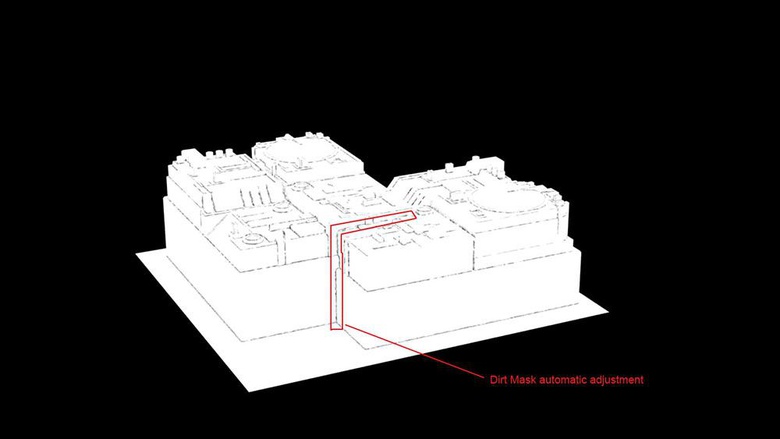 If I move the new instance in any direction the mask automatically adjusts to the position. Note that each movement creates a unique pattern (Fig.09 - 10). 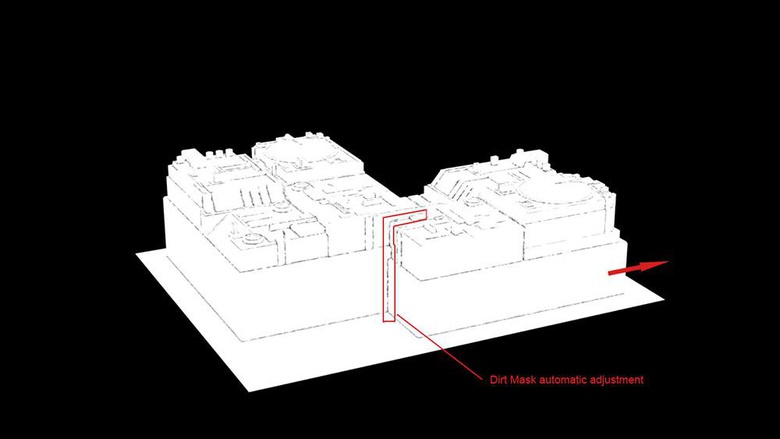 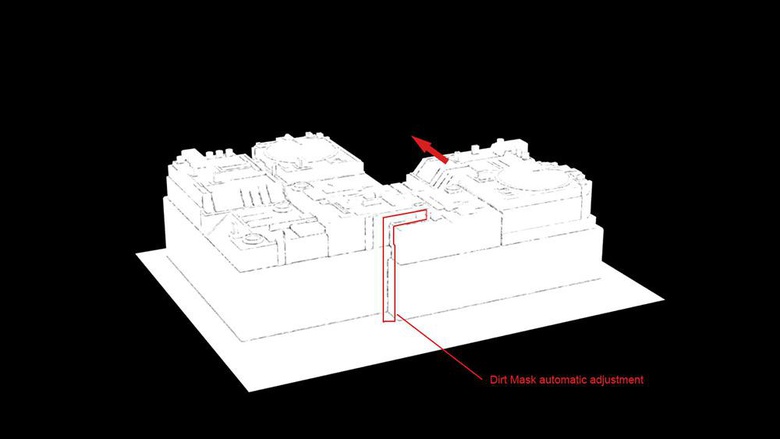 I started by first establishing a look for the relative_clean shader. The process for it was quite simple. You can go about it in one of two ways:

• Click on Create a New Layer
• Click on the map/node slot and choose Bitmap from the options
• Browse and link to the texture file. 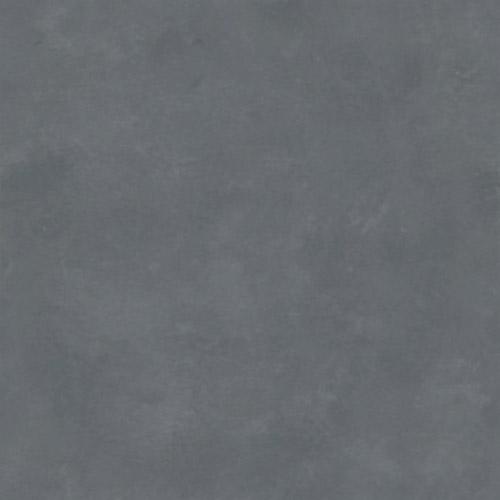 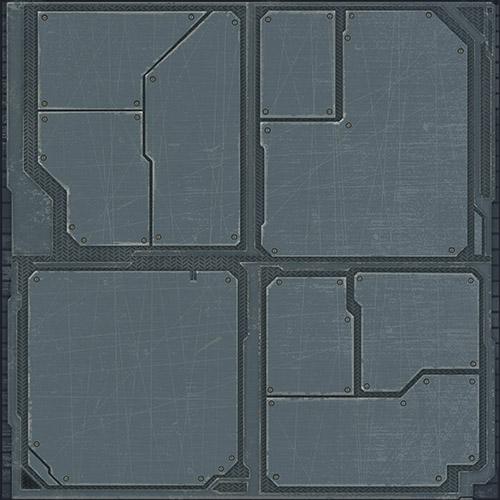 • All textures were taken from the 3DTotal Textures V07:R2 - Sci-fi Textures DVD
• Slot 4: desaturate the texture map slightly. You can do this by using a node in the 3D application or any image editing application like Photoshop. This slot also has a mask applied to it. The reason being that I only wanted the pattern from slot 4 to show in certain areas.

I used the bump map associated with the texture map used in slot 3 "Floor_10b". It was clamped heavily to create a strong black and white area presence (Fig.14).

For the Reflection map, I copied the same logic, just replacing the texture files with their specular/reflection counterparts with a few changes:

For the Bump map, I repeated the same by replacing the texture files with their bump counterparts.

Creating the dirt shader is faster and simpler compared to the relative_clean. Since this only shows up in contact areas, its presence is low in the overall image. A few important things to note are:

• The material should show larger signs of wear and tear (entropy). If your relative_clean is made like a metal, then this one should show signs of scratching, rust, etc.
• It should feel consistent with the rest.

You can use the layered texture method (or the composite map) or instead you can also make this one in Photoshop. 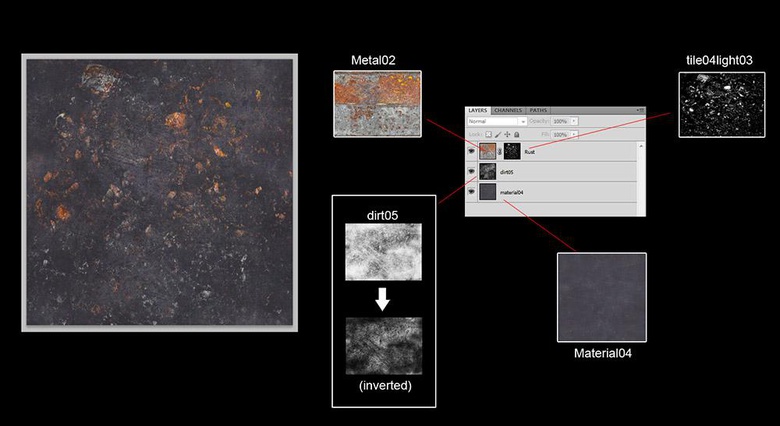 For the Reflection and Bump maps, just replace the texture files with their reflection/bump counterparts. 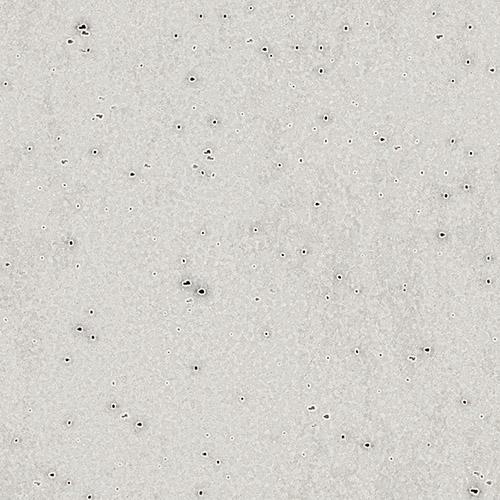 • All textures were taken from the 3DTotal Textures V07:R2 - Sci-fi Textures DVD
• Slot 3: Desaturate the texture map similar to Slot 3 of Shader 2 > Relative Clean, and shift the hue as shown in the image below.

You can create as many shaders as you desire. If you feel that you need variation at a certain point, just choose the required maps and use the same logic above to create the shader.

Maya: Just select the polygons and apply the top_level shader to it.
3ds Max: You can create a multi-sub object and use it as a switcher between various top_level shaders. You will also need to give polygons their material IDs (Fig.20). 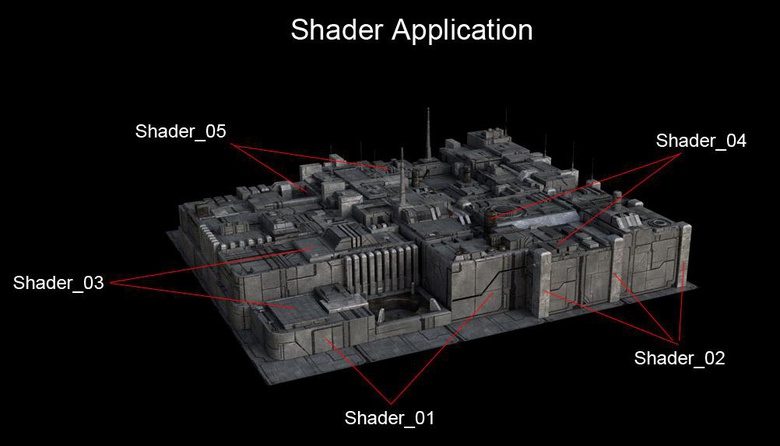 I quickly set up a simple distribution using the geometry as well as the shaders created in this tutorial, as I just wanted to see how the textures were reacting with each other (Fig.21). 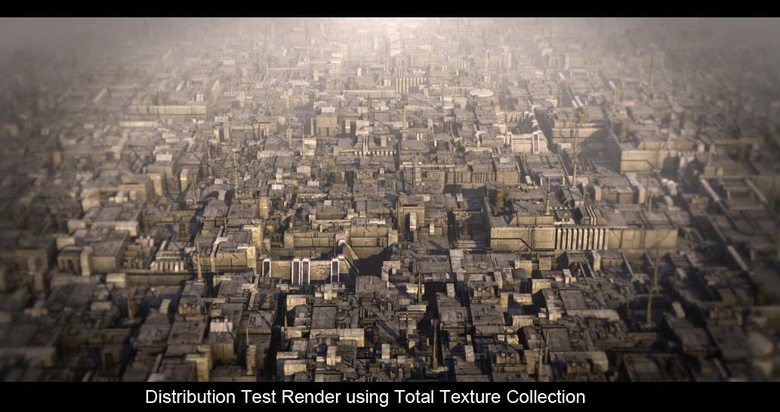 I hope you enjoyed the tutorial and a special thanks to 3DTotal.