Making of 'Alice in Wonderland' 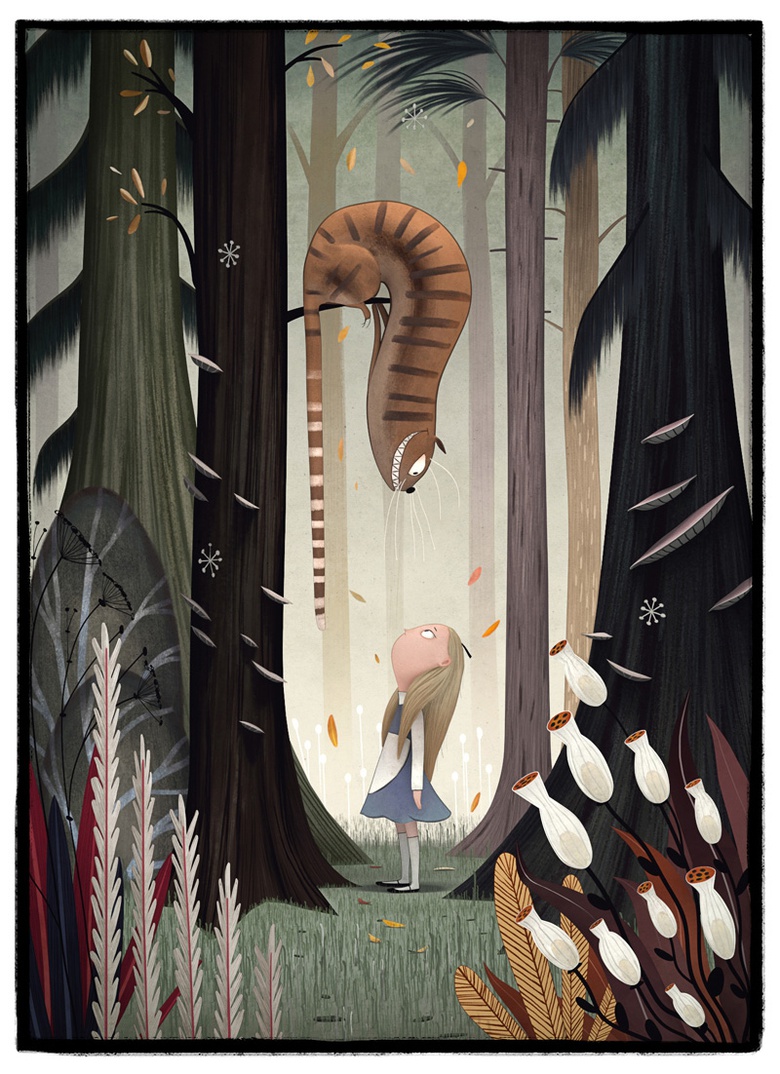 Blocking in the scene

In order to make the scene appear as flat as possible, I set the focal length of my camera to 100. I used ZBrush's ZSphere to create the base geo for the characters and imported the mesh into Maya to adjust the scale. This was to get a better idea of the scale for each object and the depth of the scene.

Once the scales of the characters were finalized, I started blocking in the environment in Maya. I began by using primitive shapes and nudging the vertices to match the placement. The geo for the grass was added later and I used the spPaint tool to place it on the ground plane.

Showing the progress of the modeling

For the characters, I used ZBrush to add a bit more detail but kept the sculpt fairly simple to avoid it becoming realistic looking. ZBrush has a nice option where you can adjust the opacity of the UI (located top-right, labeled ‘See-through'). I had the concept open in the background and lowered the Opacity of the UI, then positioned the model to match the concept as best I could.

I also played around with the angle of view in ZBrush to match the focal length in Maya's camera. I used the value written here as a starting point. The rest was just nudging the model around to match the look and the volume of the characters in the concept. 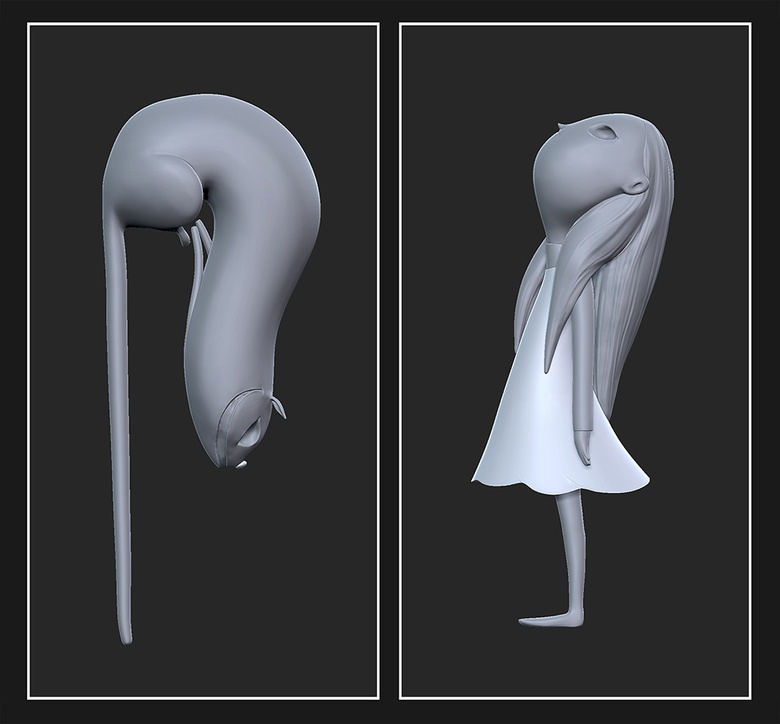 Using the Move, Dam Standard, and Standard brush to sculpt

After sculpting a bit in ZBrush, I decided to retopo to make it easier to unwrap the UVs. It wasn't necessary to do so because these characters weren't going to be animated but I just did it to get into a good habit.

I usually use NEX for retopoing but I used the ZRemesher option in ZBrush to speed up the process. For UVing, I mostly use Maya, but sometimes I use Headus if I can't get a good result. I try to put anything that might share the same quality of material onto one map so I can use the same shader. 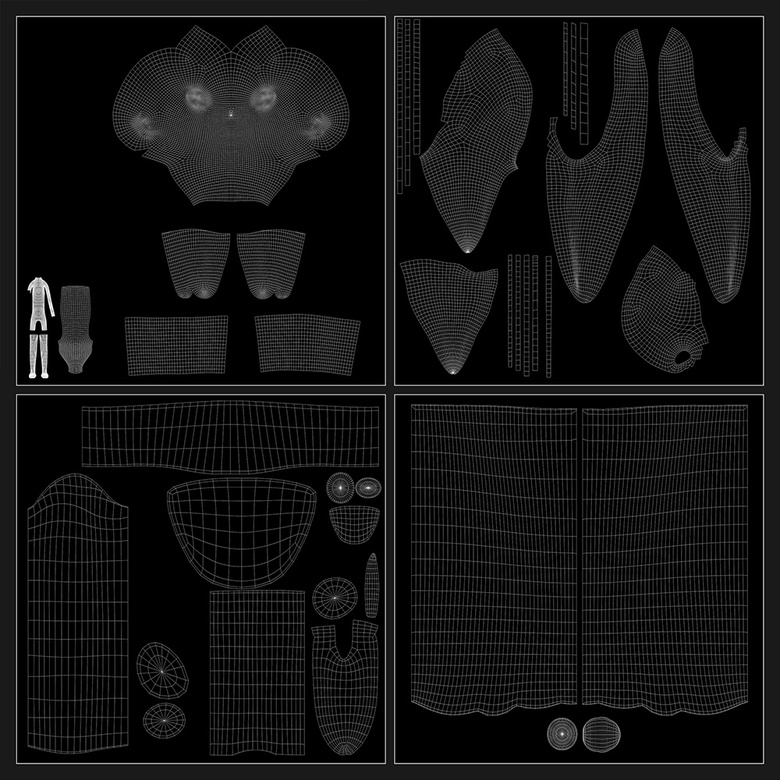 The UVs of Alice: the skin, hair, clothes and skirt

I used 7 lights and 2 bounce cards in this scene.

I mostly used V-Ray Rectangular Lights to light the scene but for some areas, I converted geometries into light meshes to get more control. I felt this method was useful for lighting the characters because the geometry had created core shadows and contact shadows that were difficult to get rid of with just rectangular lights.

I created a plane and assigned a V-Ray material diffuse set to white for the bounce cards. I used those in areas where I just needed to lighten a little (for example, in between the Cheshire cat's tail and his body). The key was to have an even lighting to get the flat look. Another way to achieve the flat look was to rely on surface shader, but I didn't want to use that route, mainly because I wanted the shaders to respond to lights and have that subtle highlight and shadowing that follow the curvature of the geo.

I added a tiny bit of self illumination (a diffuse map with Gamma Correction connected to the self illumination slot) to help get rid of the shadows where the geos met. Instead of adding more lights to flatten it, I felt that approach was quicker and easier.

Texture and customizing in Photoshop

Before texturing, I did a simple block-in using just the shaders to get an idea of the overall color palette, and only started on the actual texture painting when the lighting was close to final.

I had a few action buttons in Photoshop that I'd created to speed up the process. I did my best to work non-destructively, and kept things organized (for example, by naming layers) so that I could easily make changes later.

To get this painterly style, I avoided using photos and mainly used custom Photoshop brushes to get the hand-painted feel. In the end, I grabbed a paper texture from online and overlaid it on top to add a subtle grunge. I did this to all of my textures.

An example of how my Photoshop interface is set up

Creating the hand-painted feel to the textures

I had broken down the scene into foreground, mid-ground, background, Alice, and the Cheshire cat. I added fog in NUKE to separate the mid-ground from the background. I figured it was faster to add it in post so I could make changes easily later. The multi-mattes were very helpful because it gave me more flexibility in comp to finalize the look. 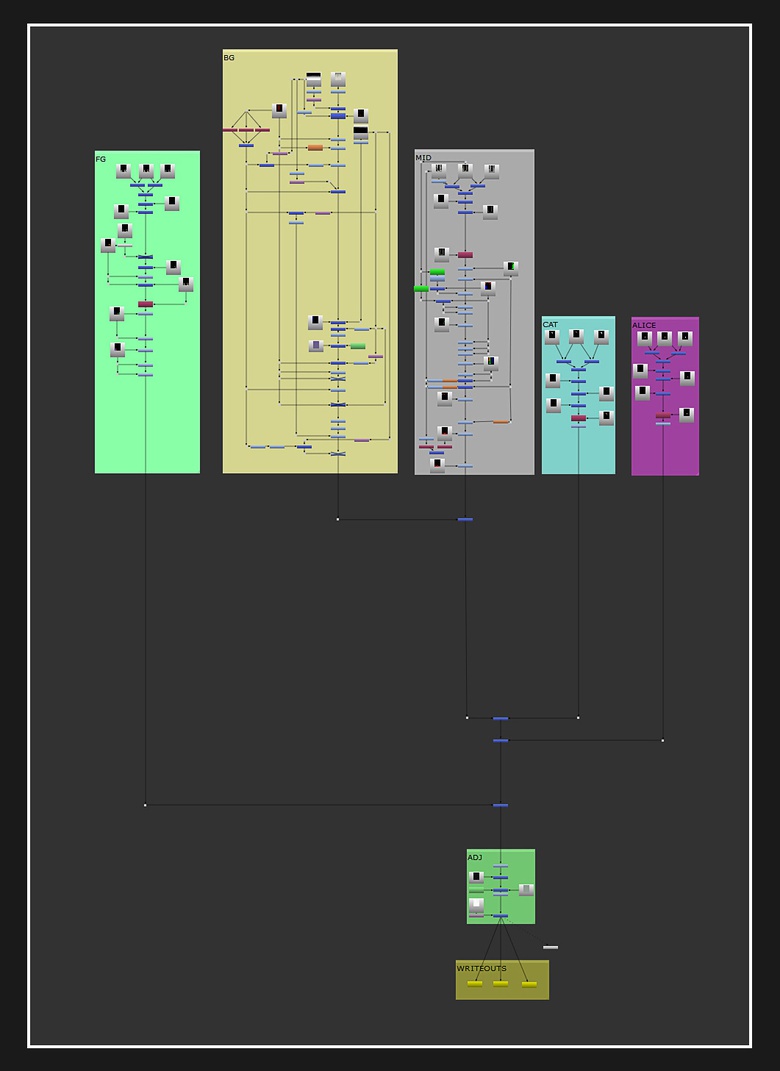 This is how I organized my components in NUKE 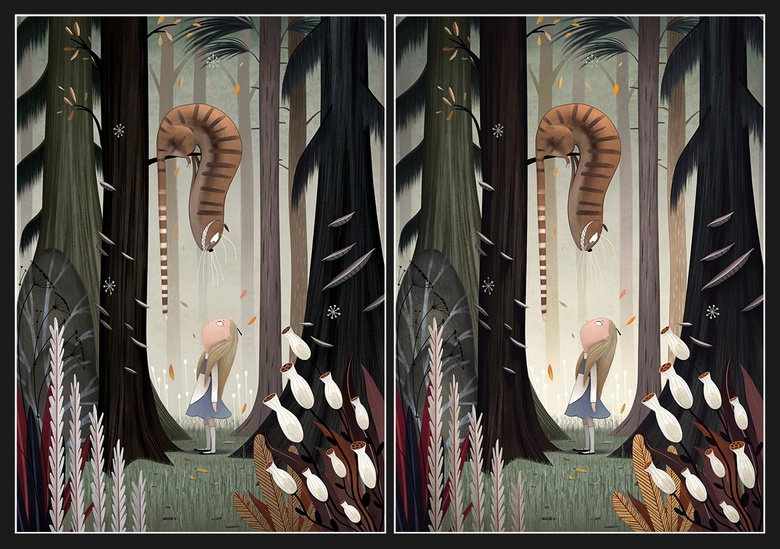