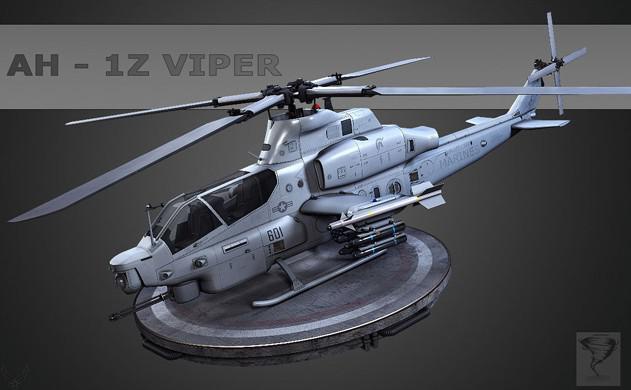 Hello everybody, my name is Martin Kostov and in this article I will have the honor of explaining the creation of my image "AH-1Z Viper Helicopter". First of all, I want to start by telling you that I did not work alone on this project. The high poly modeling was done by my friend and colleague Ivo Jovchev. We wanted to create a good piece of art and at the same time wanted to keep the poly count as low as possible. The first step we took was to look for references. We were lucky and found a lot of high quality photos on the internet. I cannot stress enough how important it is to have good references (Fig.01 - 03). 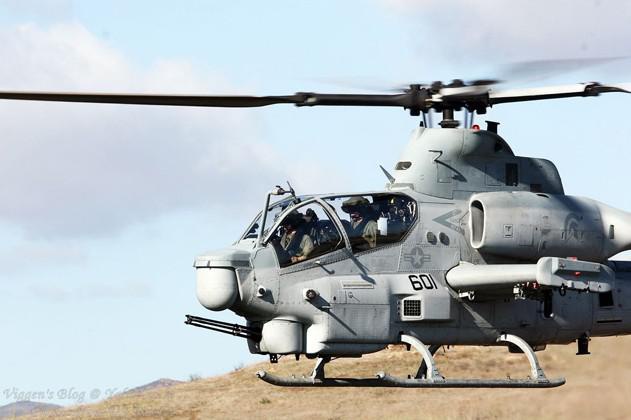 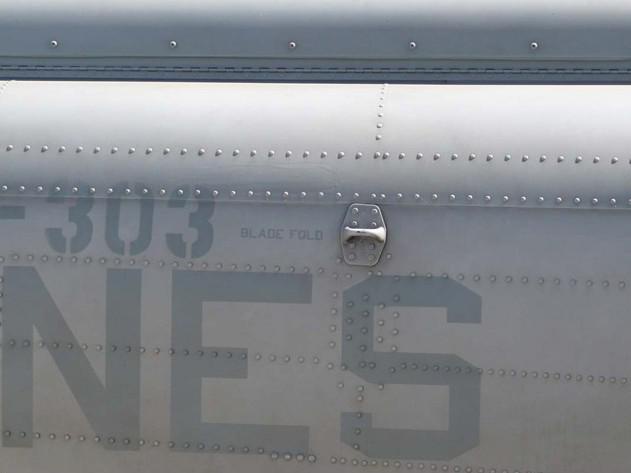 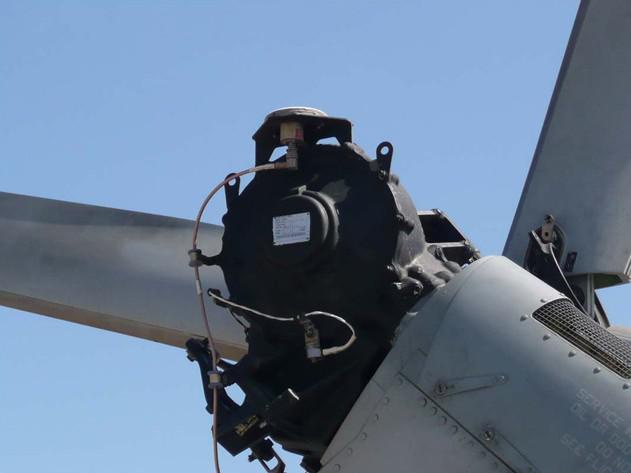 The next important step was to find information about the helicopter. Such information can usually be found on Wikipedia and similar sites. You can always make the model without knowing anything about it, but this model was very complex with a lot of different elements and we wanted to get to know the different parts so that we could create them more easily.

After we gathered all of this data we sat down and decided that in order to keep the detail, but end up with a low poly count, we had to make a very high poly version of the model first, then create the final mesh and bake all of the small stuff (like bolts and small holes). Ivo was going to create the high poly version and I would do the rest. He sat down for two-three weeks and created a really detailed high poly model with around 9 million polygons (Fig.04 - 05). 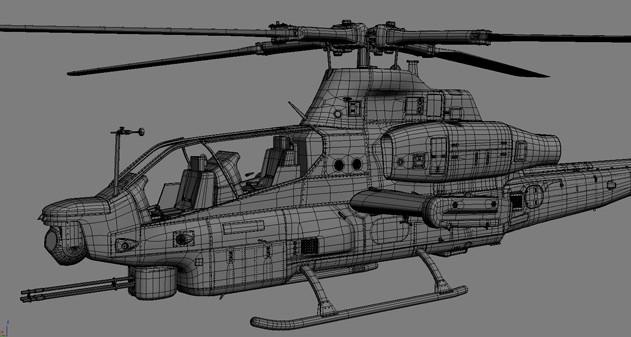 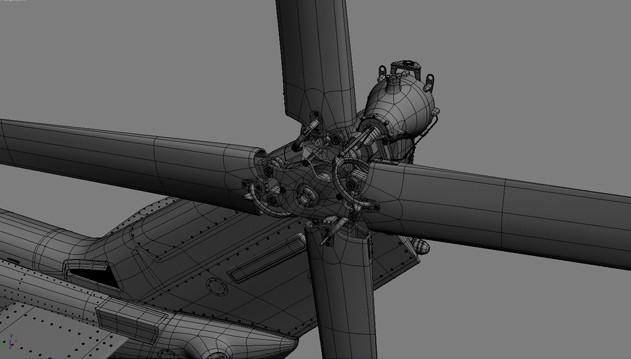 After all of the modeling was done and I had a final mesh, I started baking the parts. I could have just drawn the bolts and holes in Photoshop, but after a few tests I decided that it didn't look as good as if it had been baked from the high poly model.

Of course the baking didn't go by without a few mistakes, but they were all fixed either in the baking stage or in Photoshop (Fig.06). 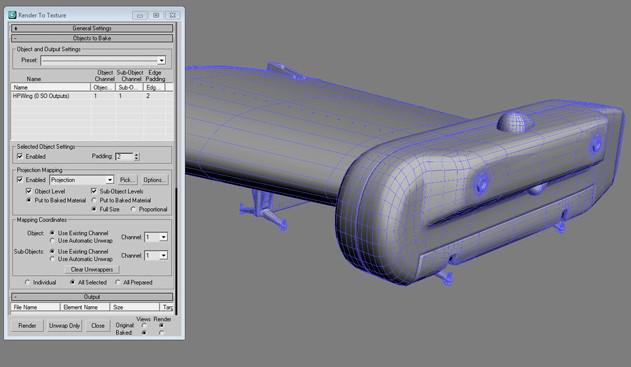 After the baking was done the next step was for me to create all the textures. This included creating diffuse, glossy and specular maps as well as a few opacity maps. I used the normal maps that I had already created and also exported UVW templates into 3ds Max.

I wanted to test my textures in real-time not only with the diffuse but with the normals as well, so I decided to use DirectX shaders just for the time being. You can only use those shaders if you run DirectX as your default driver in 3ds Max (Fig.07). 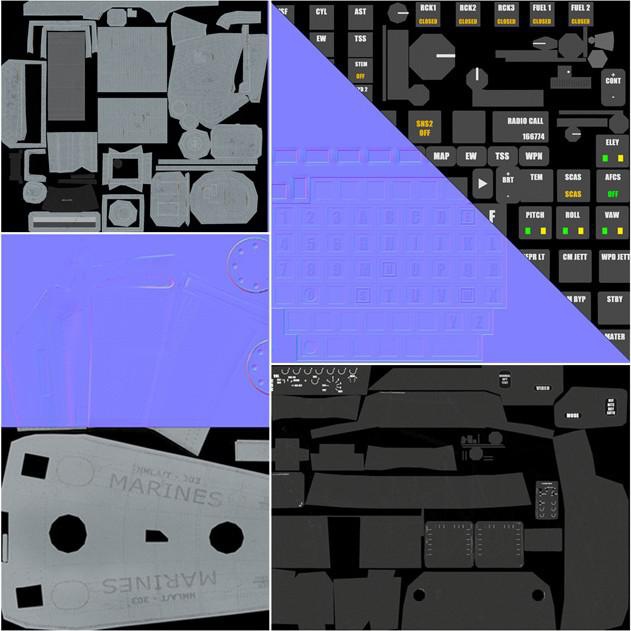 I used a Wacom Bamboo tablet for the drawing of the textures. I don't think that good results can be achieved when drawing with a mouse. Even a small tablet like the bamboo works miracles for your end result. I wanted to add some dirt, scratches and also a little bit of rust around the helicopter. Military helicopters go through maintenance before every flight so they only have small scratches and rust spots on them. Anything to0 drastic would not look realistic (Fig.08). 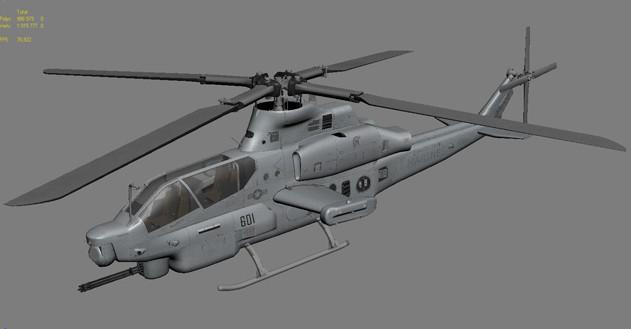 I wanted to render the final images with mental ray, so I had to create mental ray materials. I used Arch/Design materials and basically used some pretty standard settings: Reflectivity - 0.3, Glossiness - 0.5 and Highlights + FG checked (Fig.09). 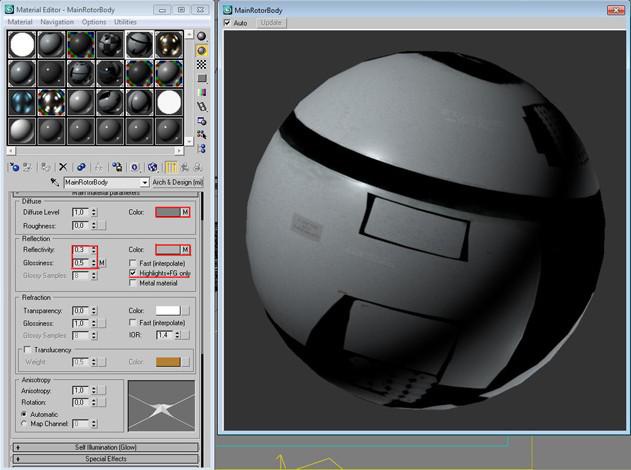 I used "mr Sky Portal" lights, because they render really fast and at the same time provide a very clean and nice result. Also they give you a very soft light which was my goal from the beginning. I used a little trick for these lights. I used the "mib_cie_d" map, which is only available if you unhide it in the 3ds Max/mental ray folder. Just go to "3DMax2008\mentalray\shaders_standard\include" and open the "base.mi" file in Notepad or some other text editing software. Once you open it do a search for "mib_cie_d". Once you find it you have to scroll down and place a # sign in front of the word hidden. This will eliminate this command and the map will be visible in 3ds Max. Just restart the program and you will find it there.

I used some middle values for this map since it is working with temperature. You have to note that higher values create a red color and lower values create a blue color. So if you type in something like 6-7000 you will get somewhere in the middle, which is white. I placed four lights around the model and one at the top with a lower value for the intensity (Fig.10 - 12). 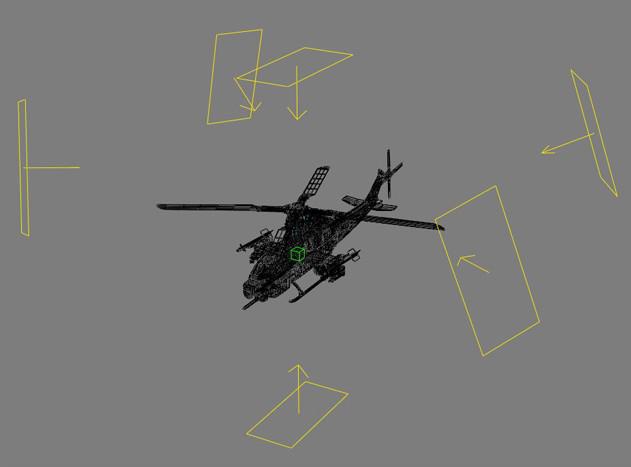 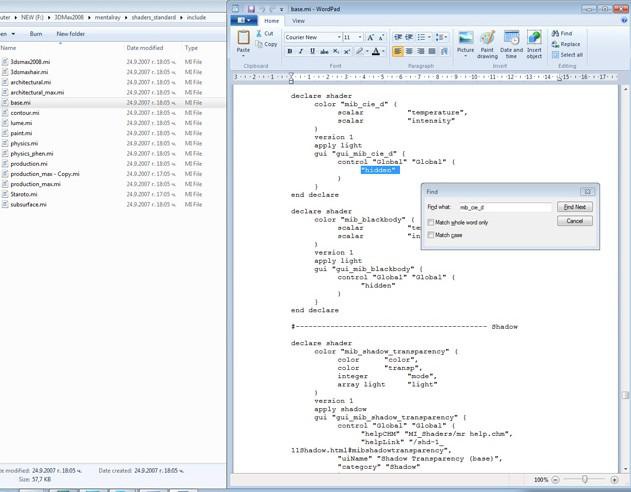 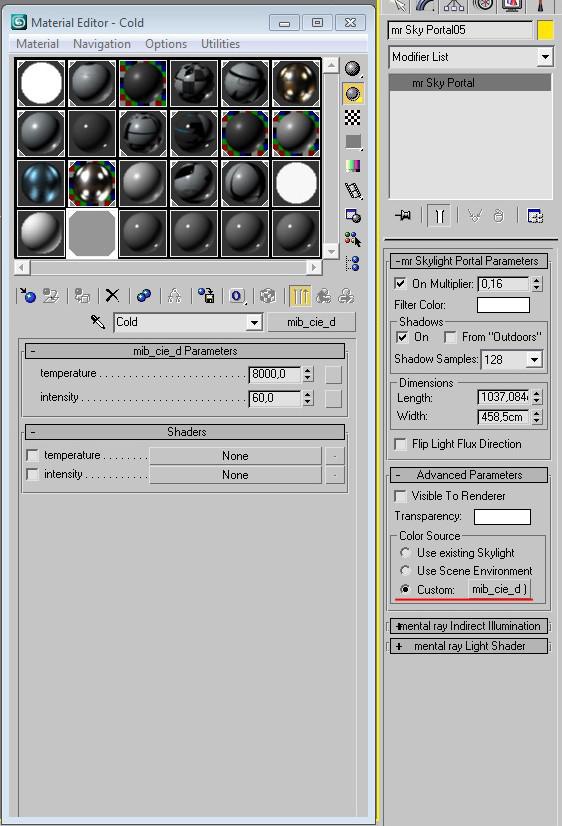 The rendering setup wasn't anything special. I rendered with mental ray and set the Aliasing values to 4 for minimum and 16 for the maximum. I also changed the Filter Type to "Lanczos".

The last thing I did for the rendering was to render out an AO pass for the post-production in the end. I recommend using an AO pass since it can add a lot of depth to your end result. I wondered if I should render a Z-Depth as well, but decided that for this scene setup it was not necessary.

For this final step I used Photoshop CS5. There wasn't much to do for the post-production. All I really did was sharpen the image a bit and add a bit more depth with the AO pass, as well as making the reflections more visible.
Also I changed the background and added a border and my logo (Fig.13).
Thank you all for reading this and also thanks to the 3DTotal team for showing an interest in our work. I hope you enjoyed reading this article and that it helped you in some small way. Bye! 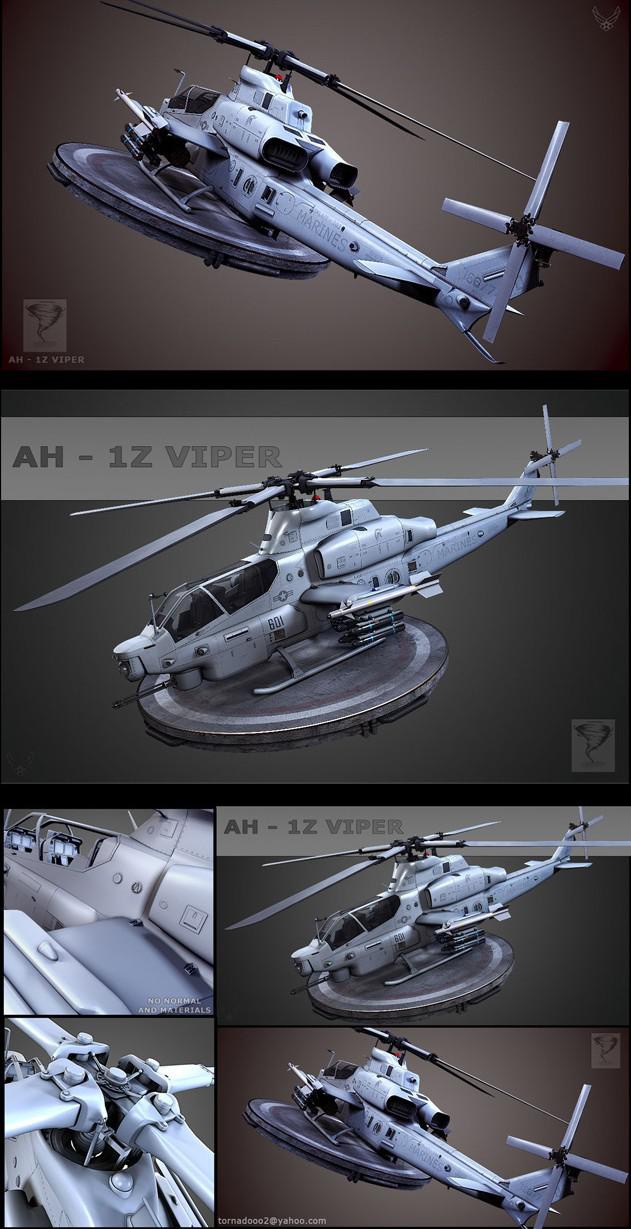